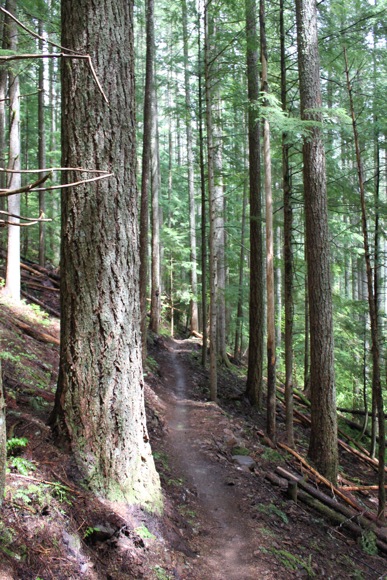 Mudhunny and I are in Oregon this week and yesterday I got a chance to ride at the Sandy Ridge trails east of Portland. Even though Portland is known as one of the bike-friendliest cities in the US, there really aren’t a ton of mountain biking opportunities in town; instead, most of the good stuff (like Sandy Ridge) is almost an hour away.

I rented a Specialized Rockhopper Expert 29er from Fat Tire Farm and Barry gave me the low down on Sandy Ridge. The trail system is basically a singletrack lollipop with a paved climb up which keeps the trail traffic one-way. Barry said a lot of work had been done at Sandy Ridge recently and that the trails were in great shape when he rode there over the weekend.

When we pulled up to the trailhead it was raining which isn’t surprising since this is western Oregon. Sandy Ridge is located in the foothills of Mt. Hood on the west side where the weather can move in and out quickly so I decided to wait for the showers to pass before hitting the trail. 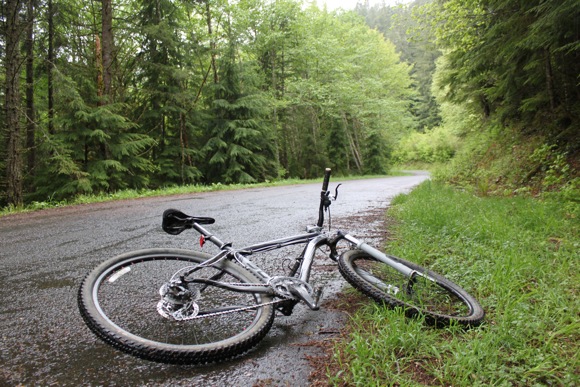 With a break in the clouds I jumped onto the paved climb just as two other groups of mountain bikers pulled into the parking lot. During the climb I was anticipating the descent down the Zig Zag trail and wondering what I’d see around the next corner. I stopped at a waterfall on the side of the road to catch my breath and tried to grab glimpses of the valley below only to see clouds beneath me. This is why I came to Oregon. 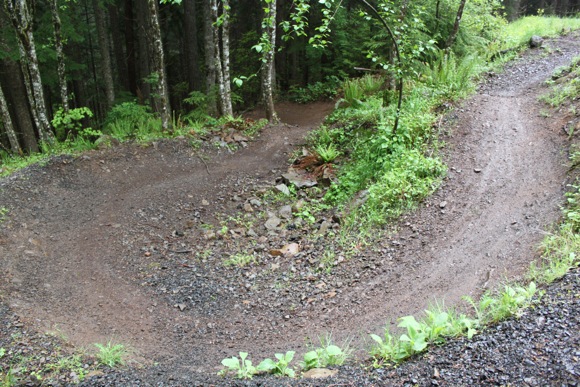 At the top of the climb I studied the map for a few minutes before heading onto the Three Thirty Eight loop. At the start of the loop I came across a trail work crew busy hardening the trail against the effects of the rain (which I imagine is a constant battle here). The “Trail Work Ahead” cone in the trail had a Fat Tire Farm sticker on it which just confirmed that I picked the right shop for my rental. 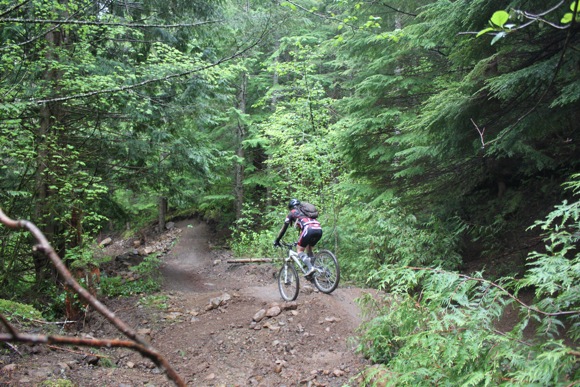 After a short, slick, and rocky ascent the trail pointed down and morphed into a downhill super run with big jumps, wide landings, and G-force inducing bermed turns. After about a half mile things mellowed out and the smooth trail undulated up and down through the forest for a mile or two.

By the time I got back up to the upper trailhead kiosk it was raining again and I was ready for my downhill reward. At the very top the trail started out bermy and smooth but this quickly gave way to technical rocks and roots as the trail switched back and forth every tenth of a mile or so. Some parts of the trail were steep and with the wet, slick roots I was admittedly cautious. Because the trail had zero climbing over the last couple miles I was starting to get a little chilly (thank goodness for Gore-Tex!). 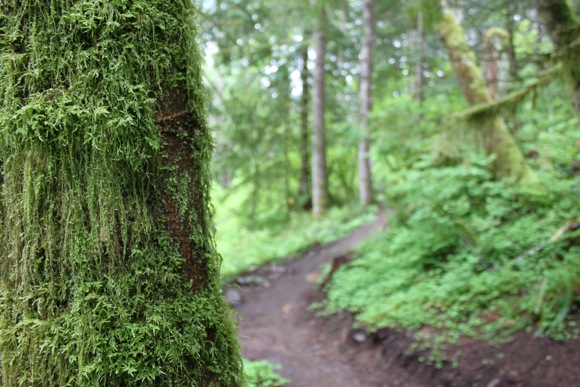 About halfway down the mountain the trail switched modes again and the steep, technical stuff gave way to fast, swoopy downhill trail. A lot of the lower half felt like it belonged at a bike park like Northstar or Winter Park – clearly the folks who designed and built this trail like to ride. By the end I was tempted to ride back up and do it again so I could hit the turns and jumps I missed on my first run! If only there were a lift… 🙂 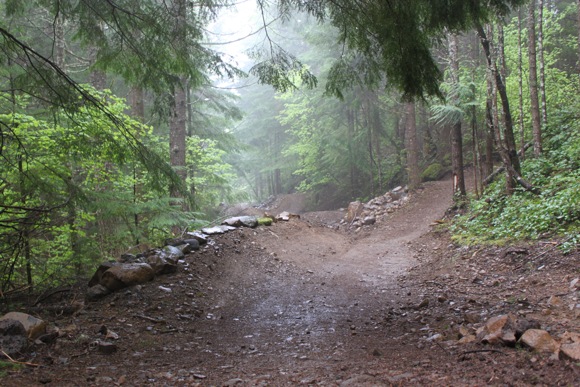 Sandy Ridge is a great trail system thanks, no doubt, to the volunteers who build and maintain the dirt. After just a couple hours on the mountain I could see what a challenging trail-building environment this is – and how the incredible scenery and terrain make that effort more than worthwhile. This trail wasn’t even on my radar before I came to Oregon but it should be on every rider’s wishlist!

Sounds like an incredible ride, I envy you! I think it’s interesting that the trail had so many different personalities over the course of one descent. I wonder if that was intentional in order to add variety, or a result of the landscape.

So adding this one to my trails wishlist 😉

Rode Falls Creek Trail, should be somewhere near where you are to the north and east in southern Washington. Sweet ride. If you get the chance the one OR trail on my must ride list is south of where you are, the North Umpqua Trail. I’ve ridden Mckenzie River Trail twice, loved it and all I know who have riddden both say Umpqua is better.

Sounds like another trail to add to my list when I go to visit friends and family on the West Coast… hopefully I can still get out there this fall.

Although being a resident of the Twin Cities (Minneapolis/St. Paul) Metro Area, I would like to point out that Portland and Minneapolis exchanged places for #1 again.

We just picked out 8 rides in Oregon and are leaving for Portland to start the ride-list today. This just got added to the list – replacing my wife’s “spa day”. Perfect. Riding is better than spa-ing.

This trail is in my backyard as I live in Vancouver, Wa. and it is as amazing as it sounds. All the times I’ve been on this trail it’s been wet and muddy. I’m really looking forward to it drying out so I can really let it hang out. The berm’s on the bottom half are so much fun to rail. Thanks to all the people who built this trail. Nice work!

Another sweet ride in the area you may want to check out is Cold Creek on Larch mountain just east of Vancouver. Most people do a shuttle but you can park at the bottom and ride up the road (6.5 mile climb) and bomb it down.

Article in the Wall Street Journal mentions the cost of this trail (so far) is $700K PLUS another $300K for trailhead facilities. That makes this officially a million dollar trail! The article also says the area gets 25,000 visitors a year now, up from 500 before the trail work.