Halfway between Eugene and Corvallis, nestled in Oregon’s majestic coastal range, sits the Alsea Falls Recreational Site which, before Fall 2013, offered little more for mountain bikers than an overgrown, primitive hiking trail among abandoned logging roads. Less than two years later in that same site, approximately seven miles of trail descending 1000 feet comprised of technical, buffed, bermed, and ridiculously-flowy fun will be found. This trail will be both hand and machine-built, and constructed with everyone from the beginner to advanced rider in mind.

Last year 7,000 people rode Alsea Falls and 80 volunteers logged a total of 2,500 hours or work. This year, Alsea has already logged 1,000 volunteer hours, will grow 3 more miles of brown ribbon, and expects twice as many visitors, including a certain Singletracks writer that would see for himself what all the hubbub was about. I sat down with Mike Ripley, President, and Eric Emerson, Lead Trail Builder. of Team Dirt, the Corvallis-based IMBA chapter to learn about their profoundly-paced trail building crusade.

Land managers, money, and builders are requisite components in the trail building equation and it is not the sum, but the product of these values that bring a trail to fruition. In other words, if one of these factors is absent, the result is zero. Even more important is the organization of the local mountain biking club, made up of passionate riders, ambitious builders, selfless leaders, and visionaries who, like a maestro, understand how to arrange, connect, and transform the otherwise disorganized but necessary components of trail building into a shredding symphony.

Through effective public relations, creative fundraising, and a seemingly-unprecedented work ethic, Team Dirt has become the quintessential mountain bike club that is getting done what many groups can only dream of. So, how has Team Dirt accomplished so much in so little time?

While land managers, donors, and builders are all essential building blocks in the architecture of a trail, the keystone upon which these elements depend for support is the establishment and maintenance of partnerships best achieved, according to Ripley, through trust. Emerson adds, “In order to gain trust you must create measurable and attainable goals that instill confidence in potential supporters to take that step forward.” So far, Team Dirt’s doctrine has guided them well, having successfully converted the hearts of several land stakeholders, hundreds of volunteers, and pocketbooks that have donated thousands.

Team Dirt partners with the Bureau of Land Management (BLM) and International Mountain Biking Association (IMBA) Trail Solutions Services in their most concentrated effort: developing Alsea Falls. Design services offered by IMBA aim at building the highest caliber of trail that minimally impacts the surroundings and requires the least amount of long-term maintenance. In other words, IMBA-built trails are high-quality, sustainable trails. When asked why The Team chose to involve IMBA, Emerson says, “Because IMBA brings a lot of horsepower to the planning process and already has a good track record with the BLM, the fit seemed natural.” IMBA Trail Solutions’ own Shane Wilson told Team Dirt that the potential to expand in Alsea Falls is such that Alsea is poised to join (and possibly surpass) the ranks of the wildly-popular Sandy Ridge Trail System.

Team Dirt has also aligned with Oregon State University (OSU) and Starker Forests Inc. to pilot the first purpose-built trail in the MacDonald-Dunn (MacDunn) Forest, the United States Forest Service (USFS) to enhance existing trail at nearby Mary’s Peak, and the City of Corvallis to introduce a recently-approved pump track in MLK Park.

…and by “resources,” I mean money. Through creative and aggressive campaigning, Team Dirt leaves no stone unturned to secure financial aid. On March 18, the group launched its “Build It. Ride It.” campaign, a crowdfunding venture aiming to raise $60,000 by April 30, 2015 to assist in moving the current trail network up to 30 miles within the next five years.

A movie/raffle night will cap the fundraising blitz and feature Scott Secco’s “Builder,” along with $30,000 worth of prizes from the bike industry and local businesses.

The Alsea Falls project is also currently one of nine national candidates in the Bell Built Grant Program which will award (based on an online popular vote) $100,000 of technical assistance to the winner and move Team Dirt’s plans forward with more advanced trail. Voting for the Western Region starts April 13 and, if won, Alsea moves to another round of voting beginning May 25, competing with two other national finalists. 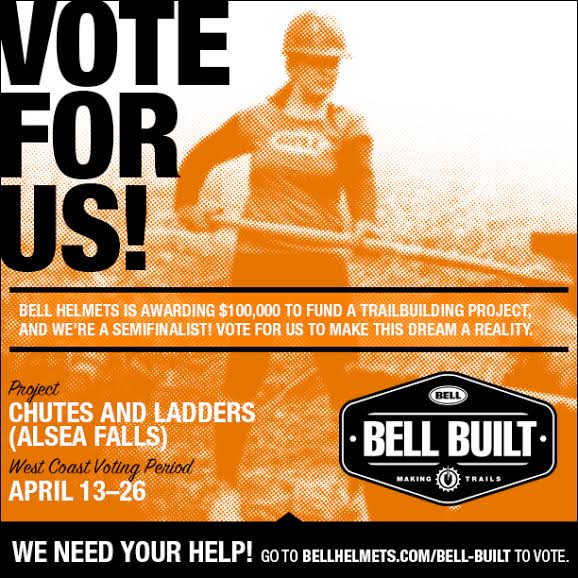 Even in light of the push and success of obtaining funds for condensed efforts in Alsea, Team Dirt maintains foresight and value in preserving its partnerships by allocating resources to neighbors in need. Of the $60,000 sought from the current campaign: $5,000 will outfit OSU’s endeavors in its own MacDunn Forest, a mini-excavator purchased for Alsea will also be rented out to land managers and other groups for similar projects, and the nearby Mary’s Peak trails will see some sprucing up as well.

If Team Dirt’s got 99 problems, the physical act of building trail fueled by volunteers of all ages and experience ain’t one. And, judging from their build day schedule, there’s no shortage of opportunity. “Since Fall 2013, 170 volunteers have logged 6,000 hours building and improving seven miles of current trail in Alsea Falls, an in-kind value estimated at $120,000,” according to Emerson.

With such a strong presence on both scheduled and informal build days, Team Dirt again shows a genuine interest in retaining support. Reaching their fundraising goal of $60,000, the Team will purchase a mini excavator and mechanized wheelbarrow which, besides augmenting trail construction by 600%, will prevent volunteer injury and burnout. “We need folks fine tuning the trail,” says Emerson, “not digging barrow pits all day, which can be downright demoralizing.” Providing the proper tools, education, and safety measures also creates incentive for volunteers to return.

Something special is happening in Alsea Falls, but it’s so much more than some cool new trail. Team Dirt is teaching the mountain biking community, or rather, the entire community, a lesson in how to effectively and creatively work within the system to get stuff done. By establishing relationships of trust with land stakeholders, through creative fundraising, and with the enlistment of an army of volunteers, within two years Team Dirt has taken an area that most mountain bikers considered less than an afterthought to its current must-ride status.

“An uninspiring canvas becomes a glamorous masterpiece when it is reattributed to a better-known artist.” Arthur Smith 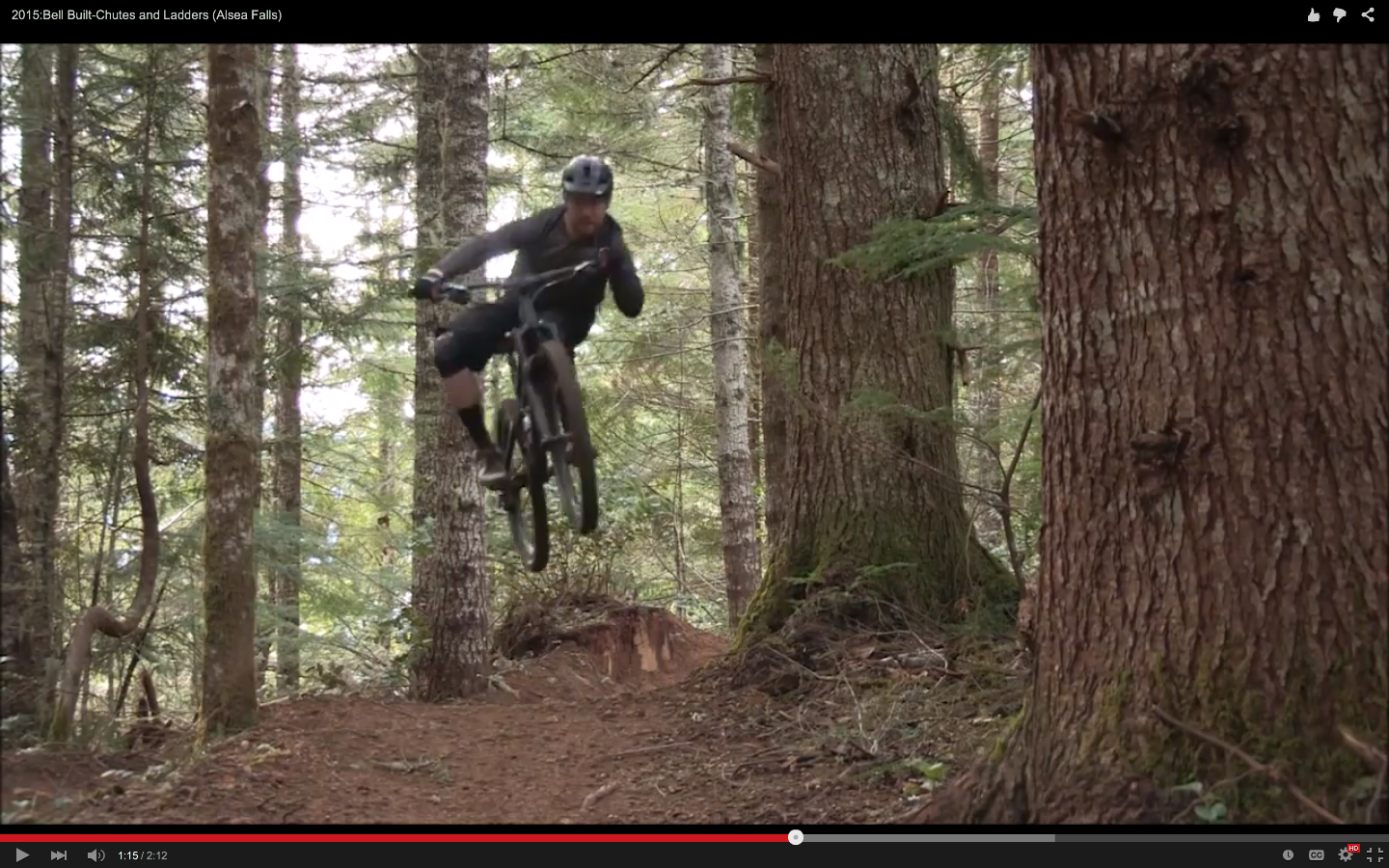 Trails
The Envy of the PNW: the Organization and Woman Behind...
Trails
News: Urban Wilderness Gravity Trail in Knoxville, TN Wins $100,000...
Trails
3 Reasons Why You Should Get Involved in Trail Maintenance...
Trails
Santa Cruz Bicycles Just Donated $500,000 to Build Trails in...