Spring is upon us. The weather is warming up, and the snow is on its way out. It’s time to get out and ride, but chances are your local trails are in need of some attention before traffic increases this spring. The freeze-thaw cycle has pushed up hundreds of rocks, dozens of branches have fallen, and the trail is covered with ruts from all the people who rode during the wet weather last winter.

In most cases your local trail system is probably built and maintained by a group of dedicated volunteers. Very few trails are maintained by paid staff; there are just too many miles of singletrack that get too much use for it to be effective to pay employees to maintain these trails. So here are a few reasons why you should pick up a shovel this spring and take care of the trails you love to ride:

Your trails need you! 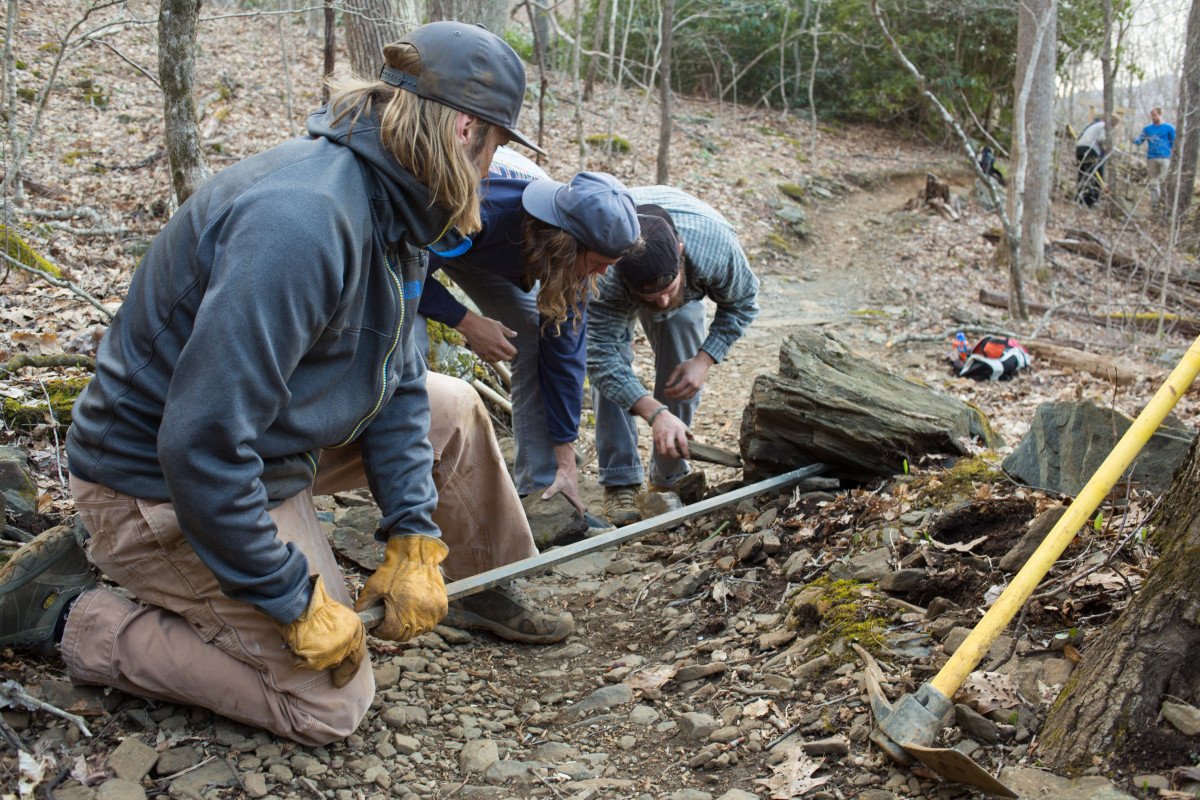 As I mentioned above, it’s likely that most people who take care of the trails you ride are people a lot like you! Unless you spend all of your time riding the lift-served DH trails at the local ski resort, then it is very unlikely that paid staff work on your trails.

In 2009 several grants made the development of my local park, Rocky Knob in North Carolina, possible. However, the local cycling club had to pledge to complete all maintenance after the park’s completion. The Boone Area Cyclists literally made Rocky Knob Park a possibility.

Another great example comes from my hometown, Atlanta. In 2008, the construction of four miles of new singletrack was approved, along with repair of the existing Sope Creek trails. SORBA Atlanta committed to providing 1,700 hours of volunteer work to construct the new trail. SORBA Atlanta volunteers were also integral in a re-route that happened in summer of 2015.

These examples are from trail systems that I’ve had personal experience with, but I’m sure that there are thousands of similar situations out there. Most mountain bike trails need a large volunteer base to participate in upkeep.

You get to know your trails better.

Have you ever really looked at that monstrous berm that you bomb down every Saturday?

Have you taken the time to get to know the rock garden that always gives you trouble?

Sometimes it’s hard to stop and study features on your ride. You’re often trying to keep up with your friends or trying to squeeze in a quick post-work ride before dark. 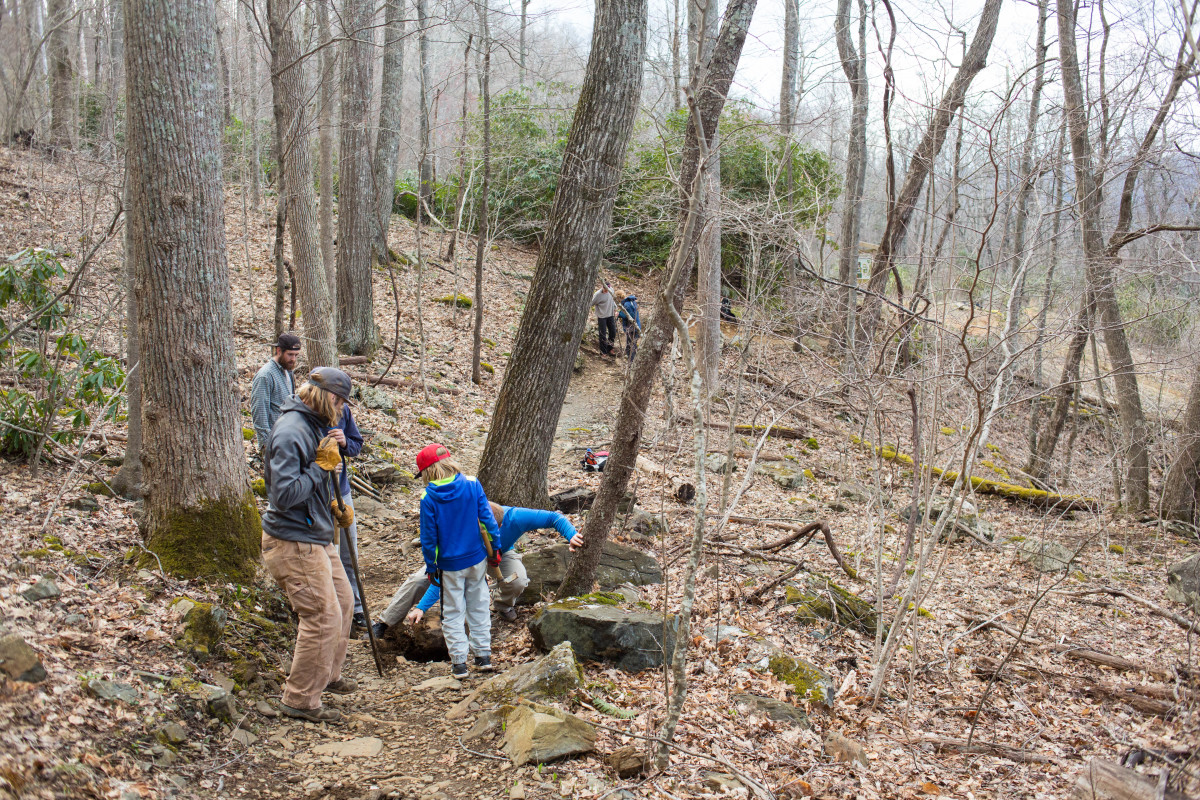 I never knew how immense some of the berms were on Rocky Knob’s PBJ trail were until I raked rocks out of them for hours. I also studied little kickers and jumps that I never took because I was too nervous, but they didn’t seem as intimidating when I stood next to them.

Working on my local trails has given me a different type of appreciation for them, and also helped boost my confidence on some of the more challenging features. I’m sure you’ll find similar results after just one day of working on your local trail.

You become part of the community.

After my second trail building afternoon, I went out to eat with eight other volunteers. I hadn’t spent time with any of these people off a bike before, and several I had never even met. They were all very different riders as well. Some didn’t own any bikes with less than 6 inches of suspension, while others were spandex-wearing CX racers.

By the end of our dinner, two people had promised to show me some lesser-known trails nearby, and I had made plans to go out and ride with a few people the next day. 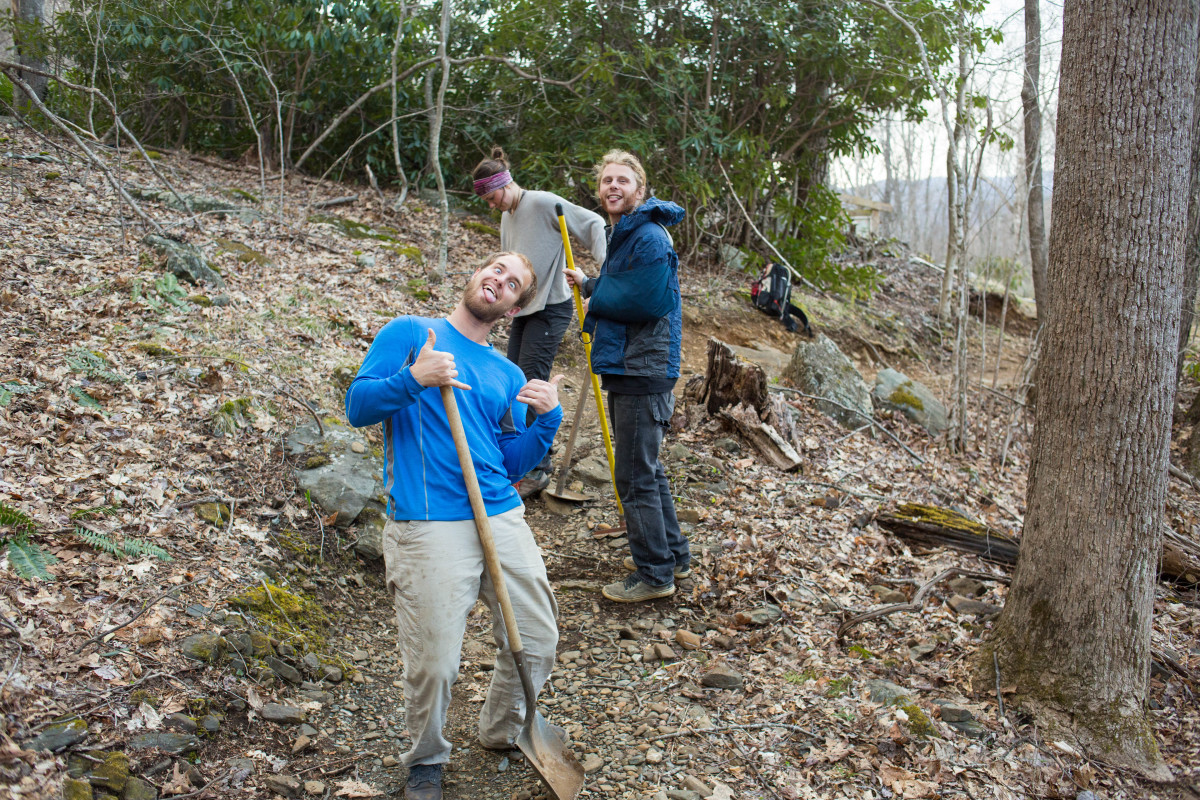 Recently, I’ve gotten involved with organizing “Dirty Thursdays” at Rocky Knob. The Trail Boss told me that in addition to maintaining the local trails, one of the most important aspects of Dirty Thursdays are building the local mountain biking community.  The Community has become one my favorite aspects of the sport. I can’t imagine my time spent on the trail without the friends I’ve met through it.

How To Get Involved

Contact your local mountain bike club or IMBA chapter to figure out when the next work day is. Also, look for signage around your local trails to see when workdays are scheduled. If you are unable to find any information on volunteering, get in contact with the land or trail manager and talk with them about organizing some trail work days.

Trail work is incredibly fun and rewarding, and most trails wouldn’t be nearly as good as they are without the dedication of volunteers just like you. Get out there and get dirty this spring!

Jackson W Moody
Jackson currently lives in Boone, NC, and attends Appalachian State University as a recreation management major. Follow him on Instagram @jacksonwmoody to keep up with his adventures on and off the bike!

Trails
The Envy of the PNW: the Organization and Woman Behind...
Trails
Bike Trail Connoisseurs Can Identify a Trail by its Builder
Videos
Watch This Timelapse of a Sweet Berm Being Built
Trails
The Summit at Snoqualmie Plans To Welcome Back Mountain Biking

Nothing more rewarding then riding a trail you helped build and maintain.