I had heard rumors of a mountain bike trail system just across the border in Tennessee by the name of Chilhowee. Several riders I met had raved about the quality of the trails up there, and it quickly moved up the ranks of my day trip to-do list.

I woke up Memorial Day morning, and tried to figure out what I wanted to do with myself. My wife had to go to work, but college and my work were both shut down, so I had no responsibilities. Well, almost no responsibilities.There was a large pile of dishes in the sink with the first smells of decomposition. It was my turn, and I had been avoiding them for almost a week. Last night, I had told myself that I would force myself to knock them the next day, but it was a sunny day outside, and dry singletrack is so more much fun than greasy, nasty dishes!

I didn’t feel like riding locally, as I had been cranking out the miles on our local trail system without a break for the past month. I had all day, so it was time to go somewhere new. My first stop was the singletracks trail database to look up nearby trails that I still hadn’t taken the time to ride. Chilhowee actually wasn’t too far away and I could drop my wife off at work on the way up and pick her up on the way back, thus reducing the amount of gas I’d have to burn to get there. Perfect, decision made!

A few hours later, and I was driving down the highway looking for a trailhead. I spotted a likely candidate on the right, and pulled off. It wasn’t the trailhead mentioned in my guidebook, but it ended up being a good choice as it was the lowest trailhead in the system. The main campground is actually on top of the ridge, so if I had parked there it would probably have meant a grueling 6 mile climb back up to the finish. Personally, I like ending with descents. When I got home and checked Singletracks, the parking lot listed here was the one that I decided to start from.

Right out of the parking lot, the trail forked. One way led uphill to the main trail system, and the other was a quick 1.5 mile trail up to a waterfall. I was here to explore, so I decided to start by checking the falls out. It was a tough, technical ride up with large rocks, roots, and tight slow-speed maneuvers on seriously exposed singletrack! Immediately I realized that some of my technical handling skills had gotten rusty. The skills were still there, they just needed to be shined up a little bit. After a tough 1.5 mile climb and a couple of creek crossings that were way too technical to ride, I made it to the falls! 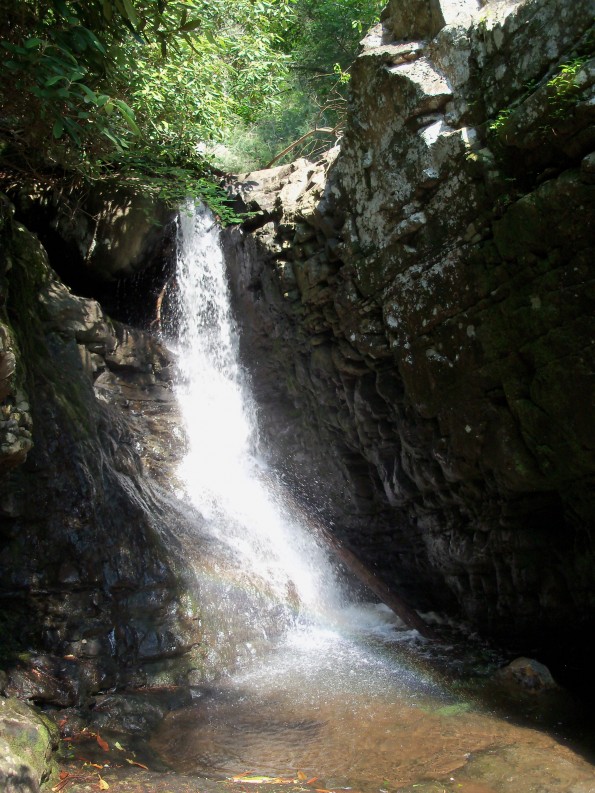 It was well worth the effort, but I didn’t hang around long because I had a ride to do!

I retraced my tire tracks back down the way I had come, and then cut up to the Clemmer Trail, the main climb up to the rest of the trail system. I knew I was in for some sort of climb, but the trail took me a little by surprise and rocketed straight into the sky for about 5 miles! The tread was fairly loose gravel and the grade was steep, making it tough-going in some spots. The trail varied in width from a respectable singletrack to more of a doubletrack. 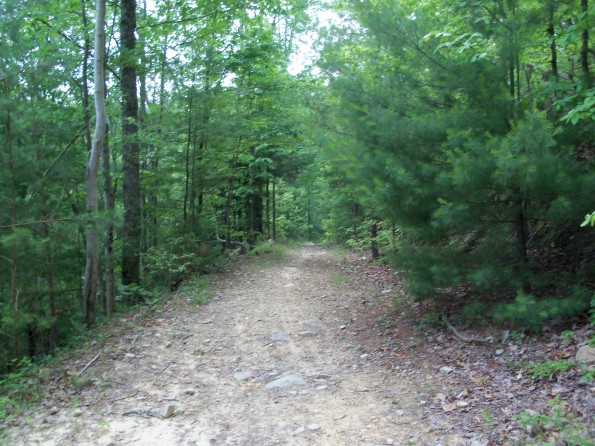 There were trails on the map going every which way, and my guidebook didn’t seem to have a good route that made the most of the available terrain. So, I tried to create my own loop, roughly circumnavigating the entire trail system while trying to catch some of the inner trails as well. I peeled off of the main climb onto the Slickrock trail as soon as possible. If you decide to come to Chilhowee, be aware that the only slickrock on the “Slickrock Trail” is about 5 feet at the entrance, and then it’s over. The rest of the trail was a ton of fun, and offered some pretty rocky, challenging singletrack with good views, but there is definitely no slickrock!

Unfortunately, I was too distracted bombing through the rocks to stop and shoot photos of the gnarliest sections, but when the trees opened up and offered a view of the mountains, I knew I had to grab a snapshot: 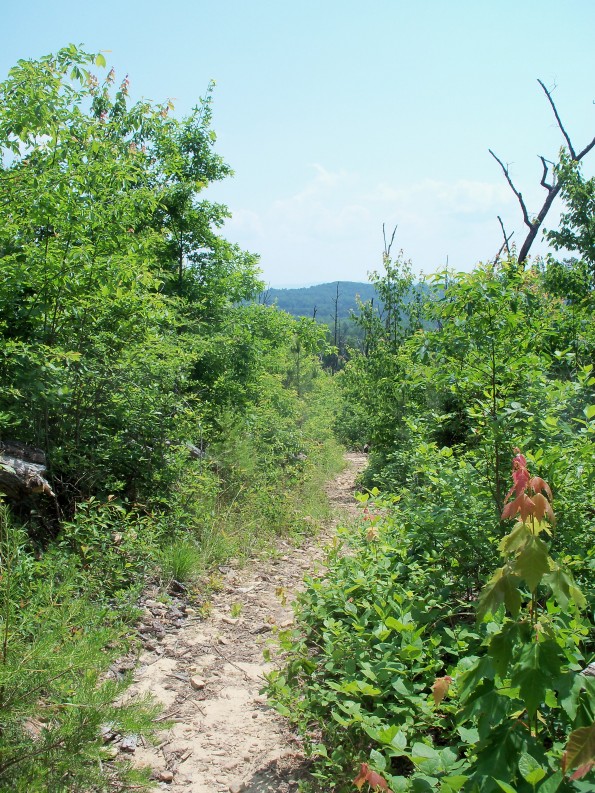 In my opinion, Slickrock was one of the best trails in the system, and yet… it just wasn’t that great. Yes, it was singletrack, yes, it was challenging and in the mountains, but during my entire ride I just never really felt like I found a good rhythm. I’m not entirely sure why, because most of the trails were definitely sweet. The biggest bone that I have to pick with Slickrock and several of the others is that they just did not feel very well maintained. Many of the trails, and especially Slickrock, were very overgrown. I was constantly ducking branches and getting slapped by underbrush as I flew past. Maybe these are just small quibbles, but the overall experience could have been better.

As I finished up Slickrock, I finally reached the campground at the top of the mountain. I had had the trails almost entirely to myself, and rolling into the main parking area was a bit of a shock as the noise of people at the beach and cars going back and forth jolted me out of my reverie. I looked at the trail map quickly, and jumped back on the quiet singletrack as fast as possible.

The shorter looped trails surrounding the campground were infinitely easier than the longer trails further out. They also looked like they see more traffic, so they were better maintained and flowed much better than many of the other trails. These trails didn’t have that overgrown/under-maintained feel, so if you are satisfied with a quick 5 miles of easy riding, be sure to check them out! 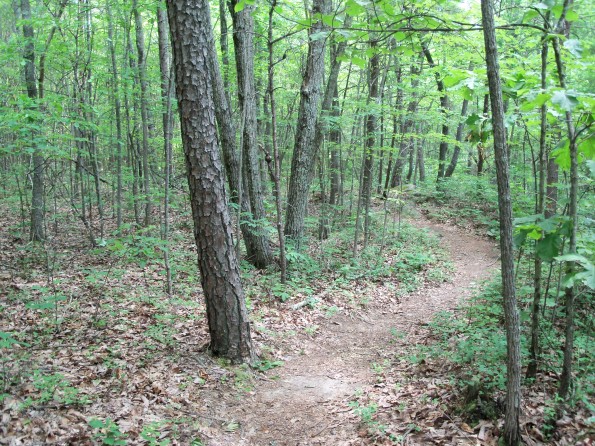 Yes, these trails were easy, but the rocky topography offered up some jewels to play on here and there: 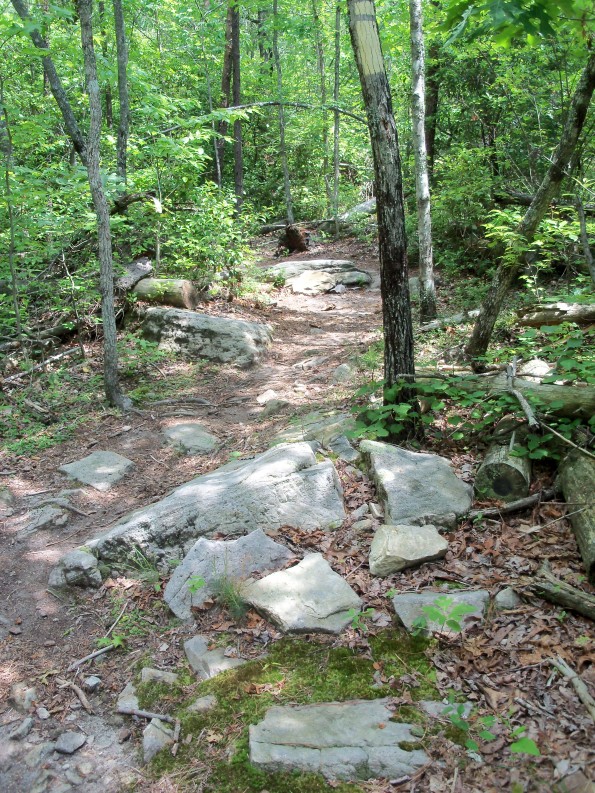 After exiting the beginner trails, I lost my way a little bit and ended up on some of the inner trails on my way to try to find another waterfall listed on my map. These inner trails also felt very overgrown, and were brutally steep! A steep, fast downhill with numerous whoops on a tight, exposed trail led to a grunt of a climb back up to the top and a more well-traveled trail. Finally, I was able to get my bearings and navigate to Benton Falls, the main waterfall in the center of the trail system: 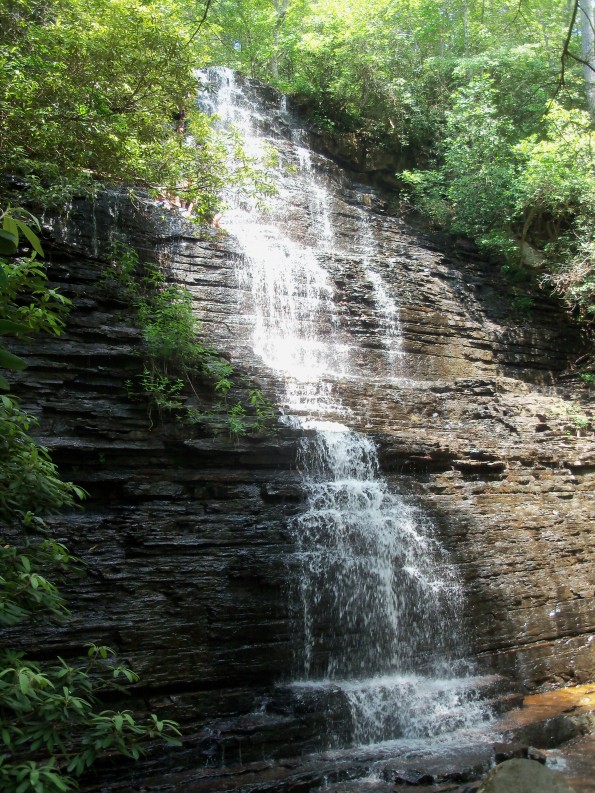 Again, the tough trails and getting turned around were so worth it! The waterfall would have been prettier if there hadn’t been people crawling all over it, though.

I didn’t get to stay long or enjoy the cool water, as I had to get off the mountain, catch lunch, and pick up my wife.

Finally, all of the pain and suffering and busting through spiderwebs was about to pay off: I had roughly 5 miles of downhill in front of my tires! The Clemmer Trail, which I had climbed up, is situated on an old road bed, and as a result it is very straight and wide open with little chance of flying off of the edge. Finally, I was able to open it up and let ‘er rip! Keeping with my AFAP downhill policy, I bombed down that trail as fast as I possibly could! I did take a quick break to snap a photo of the mountains through a clearing in the trees, but then I was off again! 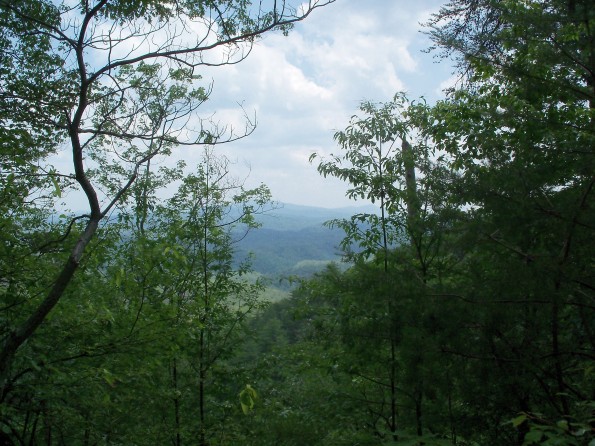 It had been a long, hot ride, and I was so relieved to get back to my pickup! My GPS unit read almost 19 miles with about 3,000 feet of elevation gain (it felt like so much more), but I knew that there were still numerous trails that I hadn’t gotten the chance to ride. My guidebook mentioned trails that were little more than boulder fields, and unfortunately, I had missed them! I had ridden some delightfully technical singletrack, but nothing exceedingly challenging.

When I got home and researched Chilhowee a little more closely, I found one of mudhunny’s photos from the Clear Creek trail, taken back in 2008: 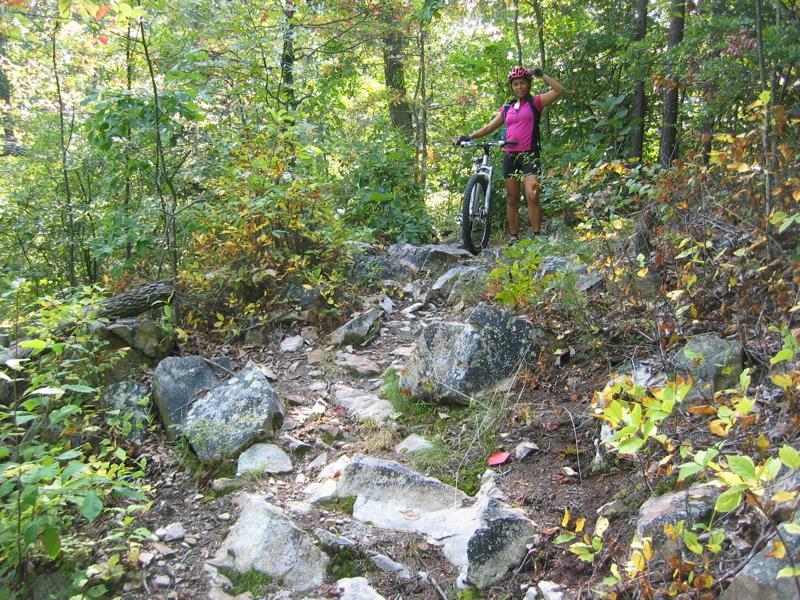 While I wasn’t very impressed with the trail system overall, I obviously need to get back there and ride this trail! I realized over the course of my ride that while we have some very aerobically challenging trails here in the North Georgia mountains and they have some challenging technical sections, that my technical handling, especially when it comes to rocks, has suffered since I’ve moved here.

Fortunately, the Tanasi Trail System is right next door, and it’s still on my to-do list… I’ll have to make it a long day and hit Chilhowee too!

To be honest I wasn’t too impressed with Chilhowee either and I think it has to do with flow – most of the trails there just don’t seem to have it. Clearly these are old hiking trails so they’re challenging on the bike. I suppose for those who ride here often it’s a good ride but when you don’t know what to expect it’s hard to get in a good rhythm.

The photo of mudhunny was taken on the Clear Creek trail according to my notes. We took this one back down instead of Clemmer and it dumped us about a mile away from the parking lot you used. What you may not be able to see in the photo is mudhunny is actually giving the trail a thumbs down. 🙂 We had a hard time riding this section which was kind of a bummer after all that climbing.

The Tanasi trail system couldn’t be more different than Chilhowee. The biggest difference is Tanasi flows really well and isn’t really all that technical (at least the parts I’ve ridden). You definitely need to get back up there for Tanasi – and bring your 29er hardtail!

Wow, it’s so green there, and there are waterfalls….

Just FYI, the guys at Scott’s Bikes in Cleveland, Tn do a weekly shop ride Chilhowee or Tanasi on Tuesday evenings. Might could get some useful info from them before you go back.

@trek7k, Thanks for the assessment and the Tanasi recommendation! I can’t wait to get up and check it out… it’s definitely a beautiful area!

@maddslacker, I could really go for some high alpine singletrack right about now!

@bikecowboy, Thanks for the recommendation. I’ll try to stop by next time I’m in the area.

I usually ride Chilhowee or Tanasi every Thursday with the Trailhead crowd. Those are both two great places to ride. They are true “Mountain” biking trails, which can take some getting used to.

perhaps the trails did not flow to you because they were new to you. I love the falls pictures. Plus I wish I had a GPS. What kind do you have?