After spending three days riding in Oregon with one day off, my wife Summer and I decided to go out for a ride together.

Now, admittedly, Summer just doesn’t enjoy mountain biking as much as I do… and she especially doesn’t enjoy it in North Georgia. In Dahlonega, there’s no such thing as a flat trail: everything is uphill both ways. So, Summer actually hadn’t been out for a mountain bike ride since our ride at China Camp in California almost a year before.

Since this was to be her first ride in almost a year, I did my research and chose what I thought would be the easiest trail in the area: the Deschutes River Trail.

We began our ride from the trailhead closest to town, and decided that we would only go out as far as we wanted and would then turn around and make our way back, as it was an out-and-back route. We packed some sandwiches for a leisurely lunch on the river bank, then set out.

Our chosen trailhead was located about a mile from the banks of the actual river, so we pedaled through dry, open land on sandy double and singletrack. Make no mistake, Bend gets hot in the summertime, and with no shelter from the sun, the first section was sweltering. However, once we dropped down to the river, the cool breeze off the water and the tall trees along the river banks made for a considerable improvement. 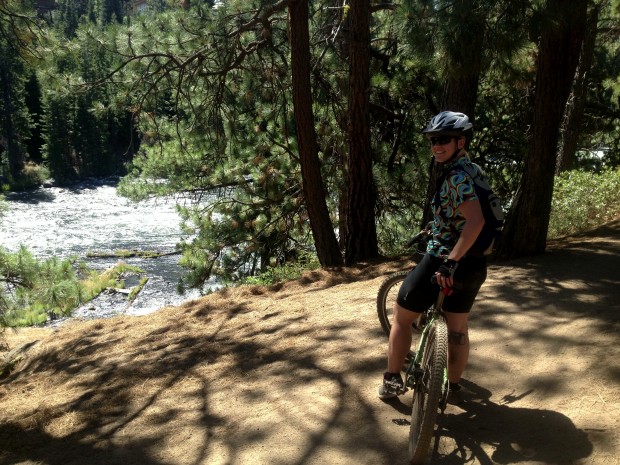 In general, this was a fantastic trail choice for a beginner rider! Much of the trail looked like this: 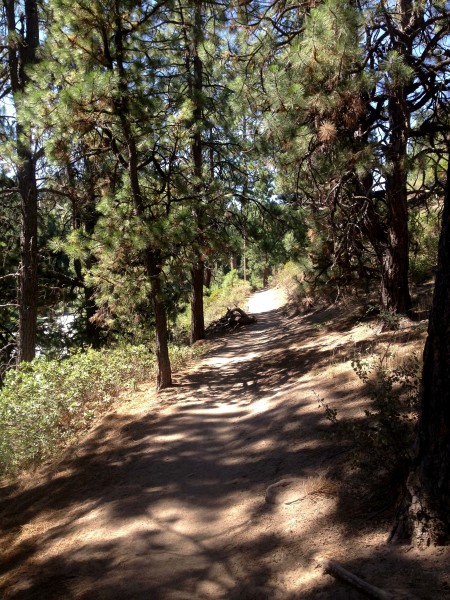 However, there were a few rocky spots early on that proved to be tricky for a beginning mountain biker. Summer wisely played it safe, and ended up walking her bike through most of the difficult sections. 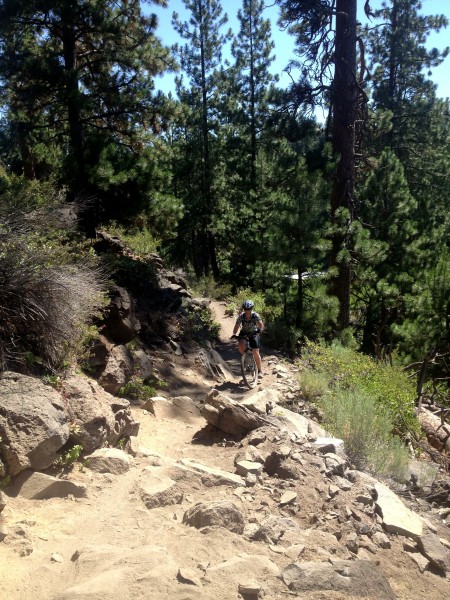 After navigating through the less interesting and more challenging areas at the beginning, the trail smoothed out and became a much more relaxing ride along the riverside. In retrospect, if I had to take a beginner mountain biker to this trail again, I would have started at a trailhead farther along and closer to the riverside. 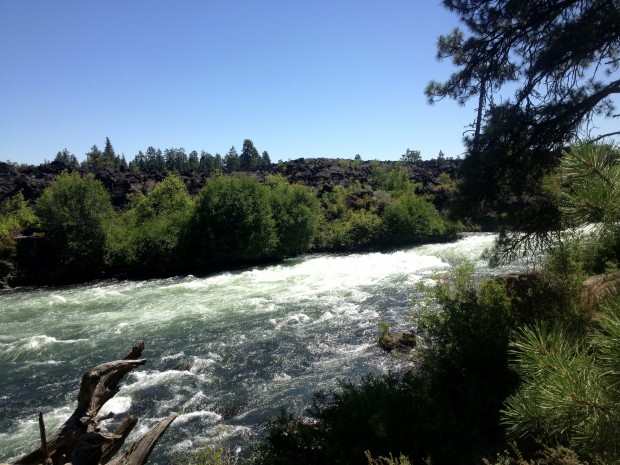 After enjoying a leisurely lunch while watching rafters and kayakers on the river, we turned around and headed back.

Everything was fine until we reached the sandy section between the river and the truck. With less than a half-mile to go until we reached the vehicle, I heard a scream and stopped, turned around, and looked to see Summer sprawled in the dirt, crying. I quickly dismounted, ran back to her, and asked her what was wrong. She complained of intense elbow pain, through a cascade of tears. Being the loving husband I am, I comforted her for a second, and then went to satisfy my curiosity and see what she may have hit.

As I surveyed the trail, I kid you not: I saw nothing that would have even qualified as an obstacle. No rocks, no roots, not even any sharp turns. All I could see was a flat section of sandy singletrack. This must have just been one of those fluke crashes, and she must have just happened to have fallen the wrong way.

Regardless, she was hurt, so I grabbed the bikes and walked them the last half-mile to the truck.

After stowing the bikes and our gear, we decided to play it safe, and headed to the hospital for some X-rays.

After waiting for what seemed like hours and finally getting the X-rays taken, the scans were inconclusive due to the swelling. The doctor splinted her arm, and set a follow-up appointment for later in the week.

It looked as if Summer’s summer of mountain biking had unfortunately come to a swift conclusion! 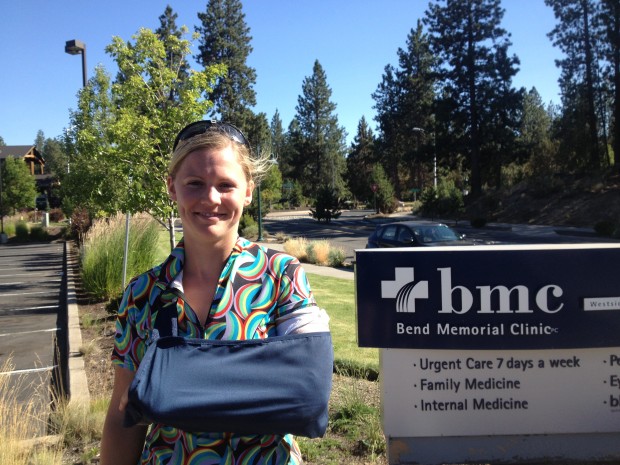 Off the Bike in Bend: Craft Beer

While Summer’s mountain biking exploits had unfortunately come to a screeching halt, thankfully Bend is chock-full of fun things to do that don’t include mountain biking. First and foremost on that long list are brewery tours.

While many people refer to Colorado as beer mecca, Oregon constantly ranks directly beneath it. And while I’ll be the first to admit that Colorado has fantastic beer and breweries, I’ve never experienced such a dense collection of amazing breweries as I did in Bend.

In Colorado, breweries are spread all across the state, and even on the Front Range they’re spread north and south, with rather large distances between. Even Portland is a large city, and thus there’s quite a bit of room between breweries. In Bend, however, this city of less than 100,000, there are 12 fantastic craft breweries that are all within biking distance of one another.

Count ’em: 12! Even if you go to a different brewery every day, that’s more than most people even have vacation time to visit. And thanks to Bend’s fantastic collection of bike paths, bike lanes, and its rather compact size, you can grab the townie (or your mountain bike, I won’t judge), jump on the Bend Ale Trail, and go brewery hopping without any risk to the welfare of others.

While we were in Bend, we went to about four fantastic breweries, and we didn’t even get around to visiting the relatively big-name (for craft beer) Deschutes Brewery. Also, don’t forget: this amazing collection of breweries makes for some pretty incredible local pubs as well.

Add in the great coffee scene in the Northwest, and there are tons of local coffee shops and local breakfast/lunch places to entertain yourself as well.

When you come to Bend, be sure to budget in plenty of money for the local beer and food–you won’t regret it!

Stay tuned for more tales from Oregon, and more information about Summer’s arm!

I once had a colleague from Bend. When she found out I was an avid mountain biker, she said I MUST go to Bend. Looks like you’ve just seconded that motion!

btw, you didn’t follow through with the final verdict on Summer’s arm. Later installment, maybe?

Yeah, it’s a great time!! I highly recommend you include Oakridge in the trip as well… and I really wanted to get up to the Hood River area, but didn’t have time.

PS, and yes, stay tuned for a later installment!

I can second the good breweries. We went to about 6 of them while we were there and our favorite, by far, was 10 Barrel. Their beer was amazing and the food was even better. The place was lively and no matter who we sat down next to, a great conversation was had every time.

You had me at good beer..

It sounds like your wife and mine have a lot in common. Maybe we can get them together for a ride when we come to Salida next time 🙂

If you like beer and bikes, Bend is hard to beat!!