I had never taken the opportunity to ride the Klondike Bluffs area in Moab before, but with the recent addition of the new Miner’s Loop, I decided to check it out.

The Klondike Bluffs Trail System, as I soon learned, is a massive web of interconnected singletrack and is one of the newer built-for-bikes trail systems near Moab. Featuring a stacked-loop design, overall the trails closer to the trailhead are easier and beginner-friendly (a rarity in Moab), and as you ride farther into the hills the trails get more and more challenging.

As we pulled up to the trailhead and stepped out of the truck, we were blasted with 30mph winds, gusting to 50+ mph. While the wind had been bad in town, up higher in the exposed, flat desert there were no trees or buildings to work as wind breaks, so the gales came howling across the desert, picking up debris and flogging our faces with it. Still, we were in Moab, and I’d be damned if I wasn’t going to take every opportunity I could to ride!

I kitted up, but since the conditions were so abysmal, I made for the Miner’s Loop as quickly as possible to knock out the new dirt right away.

Miner’s Loop is a brand-new 2-mile loop that spurs off the EKG trail. Once you get there, the route is supremely simple: just follow the recommended direction of travel as the trail meanders up to the top of a knob, then rip down the other side!

The track on Miner’s Loop–and, as I quickly learned, the rest of EKG as well–consists of moderately techy singletrack interspersed with sections of rippled slickrock. Again, like Hymasa and Captain Ahab the day before, these are some of the newer trails in Moab that have been made specifically with mountain bikes in mind… and it shows in a great way! 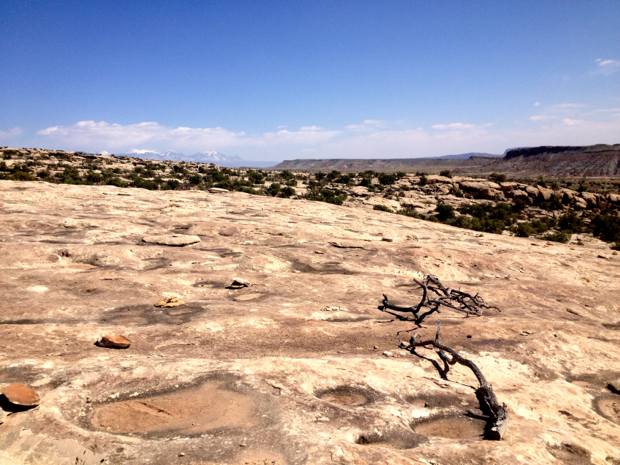 After wrapping up Miner’s Loop I continued out on EKG for a ways, but after a few miles I dropped down to Dina Flow and made my way back to the truck. Once I turned back toward the trailhead, the speed boost from the tail wind was incredible, and I realized how much energy I must have expended fighting my way slightly uphill and against the wind for the previous hour!

In the end, mainly thanks to the constant assault of the wind, I wrapped my ride up with about 10 miles of singletrack. But after looking at the map, I realized that I’d barely scratched the surface of the mountain biking available at Klondike Bluffs! Guessing based on the map, there may be somewhere between 40 and 60 miles of singletrack to be had in this area, and as Miner’s Loop attests: more is being added every year!

I rode Klondike some years back when all it consisted of was the main Klondike jeep trail and the Baby Steps singletrack. Now, I think there’s 4-5 times as much riding in the complex in keeping with Moab’s ever expanding riding options. However, even with all the new trail, it still doesn’t look as interesting as the newer additions to the Amasa area or even the Brands trails.

I’ll grant you that Klondike Bluffs isn’t nearly as good as the Amasa Back area (few places are), but I’d say it’s now pretty similar to the Brand trails. Of what I’ve ridden, I’ve enjoyed Klondike Bluffs more than the Brand Trails, but then again I haven’t ridden all of the trails in either trail system, so it’s difficult to say definitively. But they’re both pretty similar in trail design, topography, layout, scenery, etc.

I just seem to have an unusually high degree of appreciation for Deadman’s Ridge–one of my all time faves.

I hear you with the wind Greg it was nasty the past few days out here. Is it worth riding these for a first timer to Moab? We did Ahab/ hymassa and we are doing porcupine rim tomorrow, would these be good for an evening ride.?

Yeah, this would be a great evening ride because you can do as little or as much as you want. There’s enough singletrack here to put together an endurance race, though, so don’t plan to explore everything in a quick hour! I just got a small taste of what this area has to offer.

Also, if you have any beginner-intermediate riders with you, this place would be a great way to get them worked up to Moab’s more technical charms.