Early this fall, jenergy headed out of Salida, Colorado in search of dry land, as unusually heavy thunderstorms had dumped a ton of moisture on our local trails. Well, early in December, I also hit the road out of town in search of dry land. This time, it was snow and ice that was driving me off the trails, and a need to get the Mongoose Salvo Expert 29er reviewed before the launch of our winter MTB review contest. We already had snow on the ground in Salida, and winter storm Cleon was predicted to hit us the next day. So with a narrow one-day window, I hit the road.

Initially, I had planned to head to the trails on the South Shore of Lake Pueblo, but I got wind of a brand new trail system in Canon City that was supposedly still under construction and also stays warm and dry. Since Canon City is halfway to Pueblo, I figured I could at least stop and check things out. 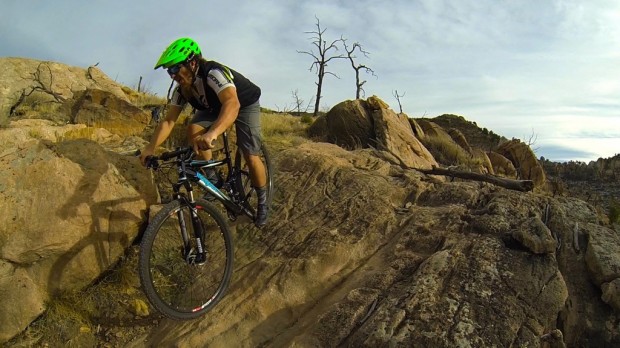 To get to the Oil Well Flats trail system, I had to wind through a few neighborhoods before picking up a county highway heading north out of town. The road soon enters a canyon (Cañon city, anyone?), and there are picnic areas and recreation sites scattered along the route. The main trailhead isn’t far up the canyon and is well marked, so I pulled up the short dirt road, parked, and took a gander at the trail kiosk.

Thankfully, I had downloaded a trail map to my phone before driving to the trail, as the kiosk map was much more outdated than the map I had downloaded, and there weren’t any print maps available. Still, the singletrack began right from the parking lot, so I hopped on it and started cranking. 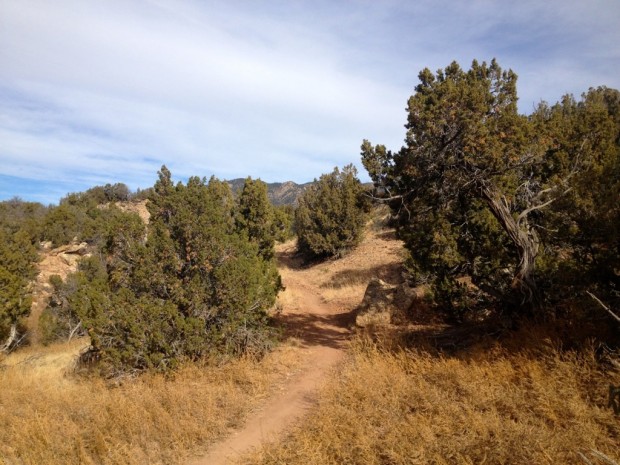 The singletrack was signed and seemed well-traveled, but it still had that new trail feel to it. This feeling was only reinforced by some of the intersecting connector trails that were clearly fresh dirt.

As the singletrack climbed up the hillside, I began to encounter more and more rocks along with some fantastic views of the surrounding area. All of the rocks were easily rideable on the XC rig I was aboard, but there were plenty that served up great drops and jumps. As I climbed higher and higher, the high-quality construction became more and more apparent, with rock-armored turns and creative incorporation of rocks and other natural features. 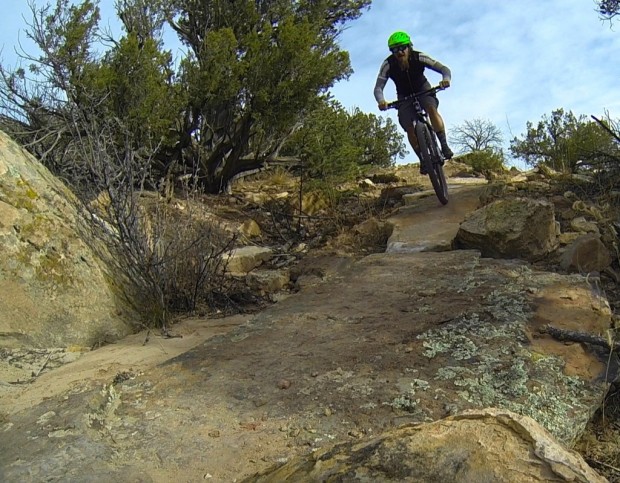 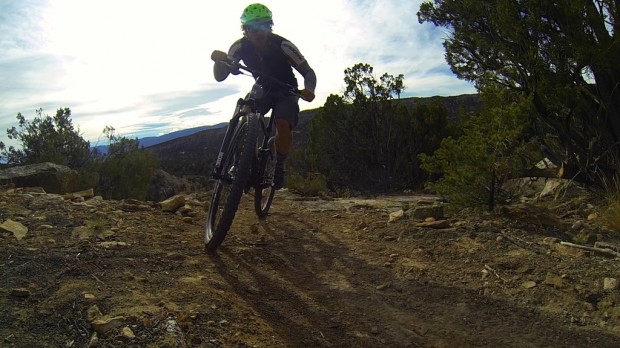 After climbing for about 3 miles, I hit a doubletrack road, and had to check my map to help navigate over to another section of singletrack. Once I picked up the trail again, it kept rolling uphill, but continued to gain elevation. The higher I climbed, the better the views got, and the more interesting the trail became. 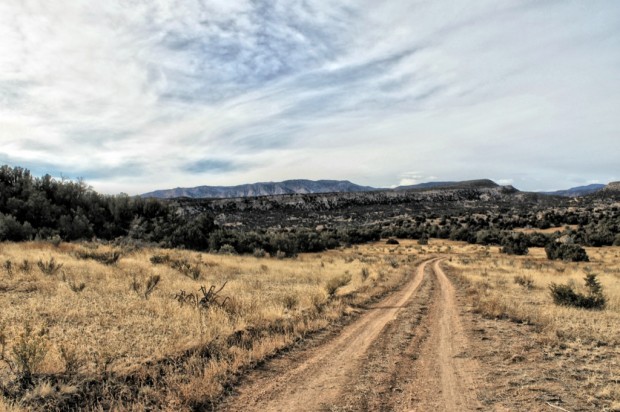 The highlight of my ride came after a grueling finish to the main climb spat me out onto the top of a massive cliff band that I’d been looking at the whole climb up. The singletrack traversed along the top of the cliff, with slabby, chunky sections of rock that almost made me second guess my decision to ride and not walk. In most spots, the trail tread is actually about 5-10 feet from the cliff edge, but a tumble in the wrong direction could still easily lead to a 200-250 foot drop off a cliff. But as I’m sure you gathered, I didn’t crash.

While the day had been dry and relatively warm, it had been blustery, and now that I was on top of the massive cliff band, the wind from the approaching storm system was howling up and over the top of the cliff. The sounds were absolutely daunting, and with the incredible views of the snow-capped Sangre de Cristo mountains in the distance, I felt so infinitesimally small in the face of nature.

I carried on down the trail, which eventually dead ended at another overlook. I was trying to make a loop, so I doubled back to look for a trail that was marked as “under construction” on the map. I spotted it, dropping steeply down a benchcut along the steep hillside. It wasn’t marked, but it was open and rideable.

At the bottom of the steep, fast descent—probably the longest descent of the day, despite being maybe three quarters of a mile long at most—I zoomed into view of a couple of cows who just stared at me. I knew that it was open range, but actually seeing a few cows roaming around was kind of cool.

I dropped into a drainage bottom, and followed the drainage/singletrack back down to the doubletrack, and then retraced my steps back to the truck. Mission Mongoose Review: accomplished! 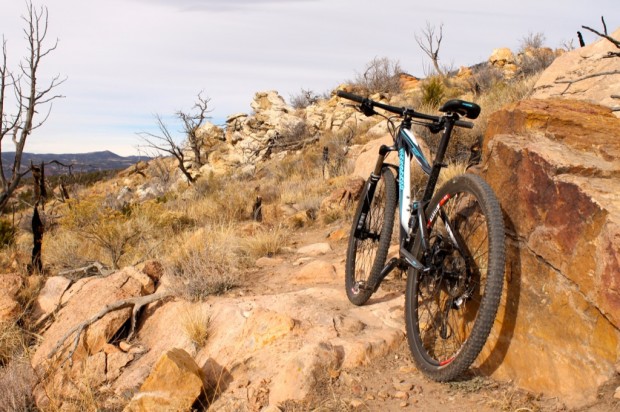 All told, the day was a great test of the Mongoose Salvo’s abilities. All of the terrain at Oil Well Flats is decidedly cross country (as of present), but it’s a technical sort of cross country. There are no huge moves and no big descents, yet I still climbed about 1,800 feet in less than 15 miles (and obviously descended just as much). There were plenty of rocks and chunder, but again, there were very few big moves or challenging spots. It was just good ‘ole fashioned, entertaining singletrack. 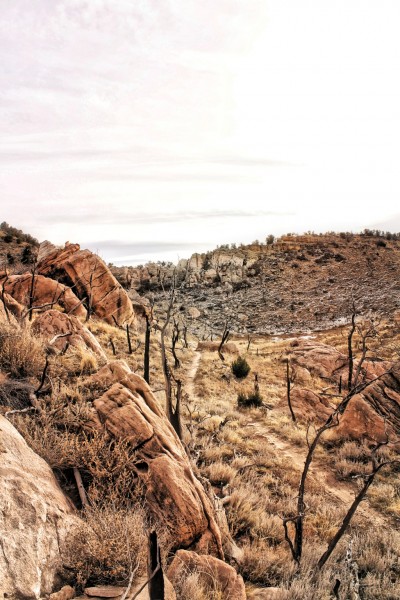 Still, this trail system looks and rides brand-new. If the map is any indication, there are tons of trails currently under construction (a few of which I found and rode, many of which I missed), and once those sections are done, there are numerous sections of proposed future trail. While currently there’s only about 10-15 miles of singletrack in this system, there will be a lot more very soon.

Also, while currently you have to string the singletrack sections together using doubletrack in order to form decent loops, the under-construction and proposed trails, once completed, look like they will essentially eliminate the need for any doubletrack riding. The doubletrack will still be there, and will serve as good shortcut options, but eventually this will be simply a dry, arid, singletrack paradise.

Kudos to the Bureau of Land Managment and the Lower Arkansas Mountain Bicycling Association (LAMBA) for this awesome new trail! If you live nearby, go check out Oil Well Flats, and keep your eye on the area as it continues to expand!

Loved the Oil Well Flats. What a great addition to the area . . . and so much potential for more great trails. Can’t wait to go back and hit those trails we missed on our first go around.

That looks like a fun trail system. The photos remind me of the Pueblo lake area…although there are a few technical places there. It is usually dry most of the year, too

Having ridden Pueblo a few times, I found Oil Well Flats to be slightly more entertaining and the scenery was far better