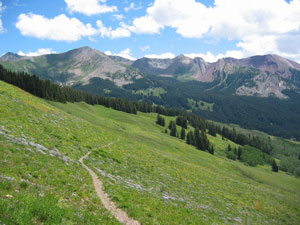 Have you ridden here yet?

I’ve always been a “trail bagger.” Never content to ride the same trail over and over, mudhunny and I started singletracks to share trails with others who could, in turn, share trails with us. Today singletracks has about 1,700 mountain bike trail listings from all over the world and it’ll take us decades for us just to make it to the trailhead of each trail (so stop adding new ones! just kidding. 🙂

The question on my mind today, however, is how many trails are enough? When can you say you’ve seen and done everything mountain biking has to offer? Obviously I’d say never but the average singletracks user says the answer is FIVE (based on people who use the singletracks ride list). Of course it’s a pain in the neck to build your ride list and maybe you don’t always remember to add new trails to your list after you ride ’em so let’s say the number actually closer to TEN. Oh and the average singletracks rider has been cranking for TEN years. How does that sound? One new trail. Per year.

On our list of most traveled mountain bikers mudhunny and I still hold the top two spots with 121 and 132 trails ridden, respectively (though I’m pretty sure mudhunny hasn’t been updating her list 😉 ). Dauw is not far behind with over 100 trails bagged but for the most part riding more than 20 different mountain bike trails puts you in an elite group. With gas prices as high as they are it’s tough to justify driving 1-2 hours just to ride new dirt but to me the draw of the unknown is irresistible.

The point of this is to encourage EVERYONE to get out and ride at least one new trail EACH MONTH this summer (that’s June/July/August/September). If you live somewhere with tons of local trails like Colorado Springs you can probably knock that out in an afternoon. If you’re in Danville, VA you’re gonna need to do a little driving – but let me tell you it’s worthwhile. You’ll see new sights, learn new skills, and (probably) end up finding your new favorite trail out there. Bring some excitement and adventure back into your riding this summer!

Trails
Israel's Mountain Bike Master Plan Includes Accessibility Options for Everyone
Advocacy
Specialized and Soil Searching Aim to Recognize Trail Builders, Raise...
Opinion
What is Your Favorite Type of Mountain Bike Trail?
Trails
Most Popular Mountain Bike Trails in the US and Canada,...