This weekend mudhunny and I had the chance to ride a couple of the trails in St. George, UT including the world-famous Gooseberry Mesa trail. Ryan at Red Rock Bicycle Co. hooked us up with a couple mountain bikes from Mountain Bike Buddies and connected us with Bryce and Danny to show us the trail. It’s a good thing he did too – Gooseberry Mesa can be a confusing and (somewhat) dangerous place to ride for first-timers. I highly recommend anyone riding in St. George stop in at Red Rock Bicycle Co. to grab a map and a read on the local conditions. The guys at the shop are great and they’re more than willing to help!

We got an early start in town Saturday morning where the high temperatures were supposed to be in the mid-90s. Fortunately Gooseberry Mesa sits above 5,000 feet and when we arrived at the trailhead 45 minutes later there was a nice breeze and the temperature was a good 10 degrees cooler. The top of the mesa is dotted with low trees and scrub brush and appears flat as you look across the horizon, though as we would soon find out the trail is anything but flat.

After gearing up and making adjustments to the bikes we were just about to head out when there was a short, violent hissing sound from Danny’s bike lying on the ground- a flat tire. We hadn’t even started riding yet but for some reason the tube decided to blow out on its own. After a quick fix we were on the trail where fortunately we had no more mechanical failures. 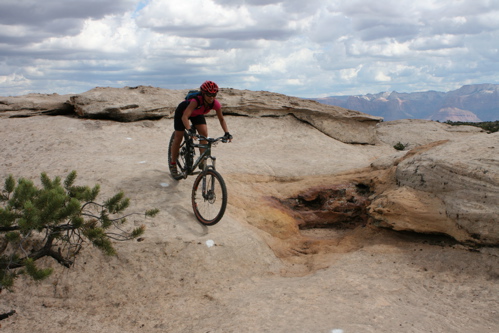 From the trailhead where we parked we started on the Windmill trail which skirts the northern rim of the mesa with incredible views of Zion National Park. The trail here was pretty fast with a few tricky, rocky spots thrown in and at one point the trail traverses perhaps the most bike-friendly and unique cattle grate I’ve seen. The Windmill trail eventually connected with the Practice Loop where we got our first taste of extended slickrock riding (for lack of a better term). 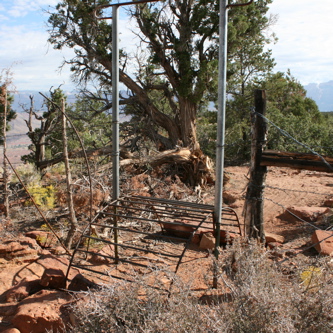 The ‘slickrock’ at Gooseberry Mesa isn’t like the slickrock at Moab at all. The rock here is mostly light brown in color and is much rougher than the red pavement-like slickrock in places like Moab. In some ways the rock features we encountered at Gooseberry Mesa reminded us of some of the trickier sections at Palmer Park in Colorado Springs on a much grander scale. 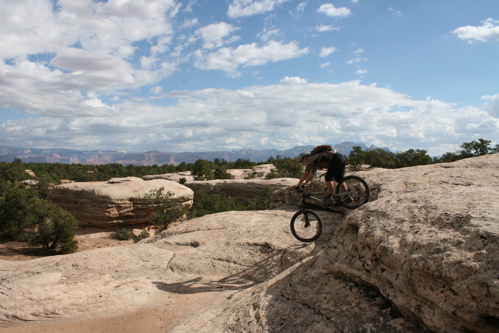 After about 3 miles of riding we hit the main trailhead and started down the Cattle Grate trail which connected to the South Rim trail and God’s Skatepark – a large slickrock playground with rock features that even Tony Hawk could appreciate. At this point the trail rating signs go from ‘most difficult’ to ‘extremely difficult’ while offering up amazing views to the south as it traverses the rim. We didn’t even come close to cleaning many of the short rocky climbs on this section but this is the kind of trail that’s meant to challenge riders. Gooseberry Mesa is a trail where each time you return you are able to pick your lines a little better and ride the trail a little more cleanly. As first-timers the trail was admittedly tough. 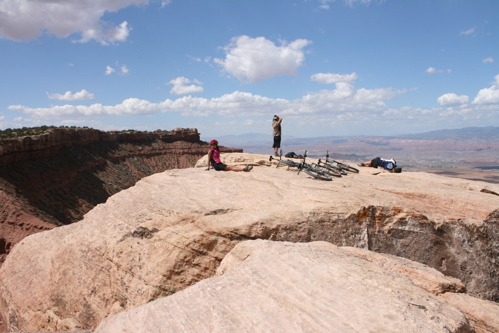 Bryce and Danny took us on The Point trail which is an out and back section that leads to incredible 360 degree views of the area. After soaking in the view we headed back down the trail to the North Rim trail which eventually led us to the Windmill trail and back to the car – a welcome sight for sure as the sun and rocks were beginning to take their toll on us.  Our upper bodies were exhausted but somehow our legs still felt almost fresh.

The Gooseberry Mesa trail is a ride unlike any other you’ll find. Incredible views, challenging rocky ascents and descents, and a variety of terrain that’s rarely matched in a single trail system. Gooseberry is the type of trail you’ll want to ride again and again to discover hidden lines and to marvel at the constantly changing scenery. It’s tough to believe this trail doesn’t have IMBA Epic status yet, though I imagine it won’t be long before it gets the recognition it deserves (and the ensuing crowds that follow).

On Sunday Bryce and his wife Cimmaron took us out to Church Rocks just north of St. George and we’ll share more about that in a later post. For now, it’s off to Interbike and the outdoor demos at Bootleg Canyon!

[…] day with a chilly ride at the Stonewall Falls trail in North Georgia. The highlight of 2008 was a ride at Gooseberry Mesa in St. George, UT with our new friends Bryce and Danny where we were introduced to southern Utah […]