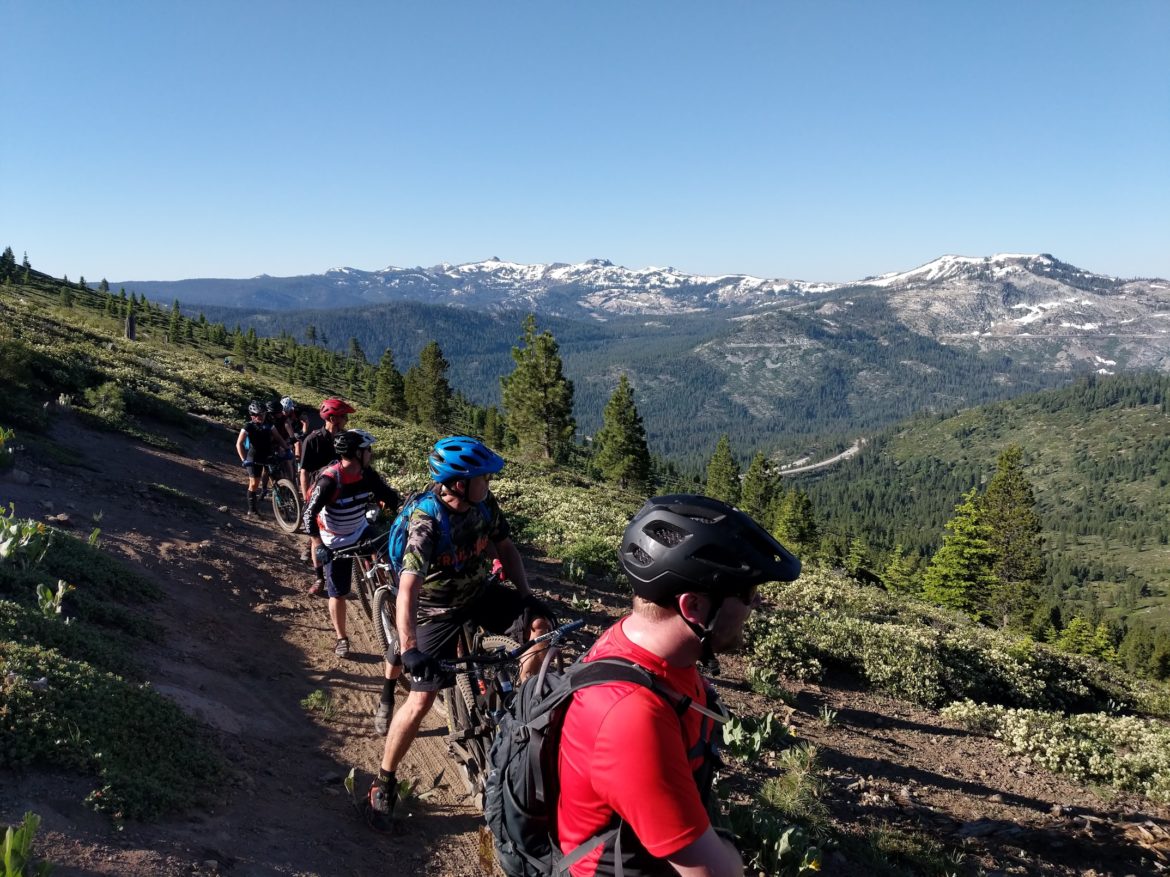 There are various things being made—products and services—that make you think “Well, of course. How did we ever survive without that?” Simple things that ease the quandary of the human condition. Things like the Camelbak or the camping headlamp come to mind. Perhaps I date myself here, as surely many readers will not recall the dental hazard of those pre-headlamp days when one held a metal flashlight between their teeth while trying to set up the tent.

A Lake Tahoe all-day mountain bike shuttle is one of those things. When Ryan Fowler announced two years ago that one of the services offered by his newly founded Dirt Gypsy Adventures was an epic day of shuttling Tahoe’s best, I cocked my head to the side like a confounded Cocker Spaniel and said, aloud, to no one, “Well, of course. How did we ever survive without that?”

Fowler’s been mucking around the bike biz for nearly a decade, doing this and that, but when he moved to Truckee from Oakland in 2011, he saw a need and filled it.

“I started leading road bike tours for other operators, but given that my deepest passions have been in the dirt since age 15, it was only a matter of time until I established a mountain touring and outfitter business in a region that has limitless potential when it comes to trail exploration—Tahoe. Our fifth season is proving to be our strongest yet and we’re trying to keep our offerings creative and compelling to a wide audience. ‘Get In the Van’ excursions were designed for those who seek a big day out spent with friends riding in unique terrain.”

Several options are on offer, ranging from beginner, family-type excursions to the more advanced, ‘Get in The Van!’ option where your pre-adventure e-mail includes stern admonitions regarding the type and length of the ride, and the minimum amount of suspension and tire width required to enjoy the outing. Yes, it’s a shuttle, but you’re still gonna ride uphill for1,500 feet over the day, and the down bits are no bike path. My group of 13 filled every available seat in the van, making 15 souls when counting Ryan and Adam, our trusty driver and co-guide for the day.

Departing from Truckee at 7:30 a.m., bikes cozily stowed in a trailer and atop the Dirt Gypsy rig, we headed for the Tahoe Donner Rim Trail and the “Drifter Hut” trail to Johnson Canyon. Lingering snow banks chilled the pace of the jacked-up racehorses in the front and allowed the crew of five gals and nine guys to re-congeal into a rolling, bucking bubble of happiness, whooshing down the very bike-friendly trail. The quintessential Tahoe granite/pumice, light gray, and reminiscent of moonrock, kept this run blissfully dust-free. The views to Donner Lake at every break were icing on this already glorious cake. 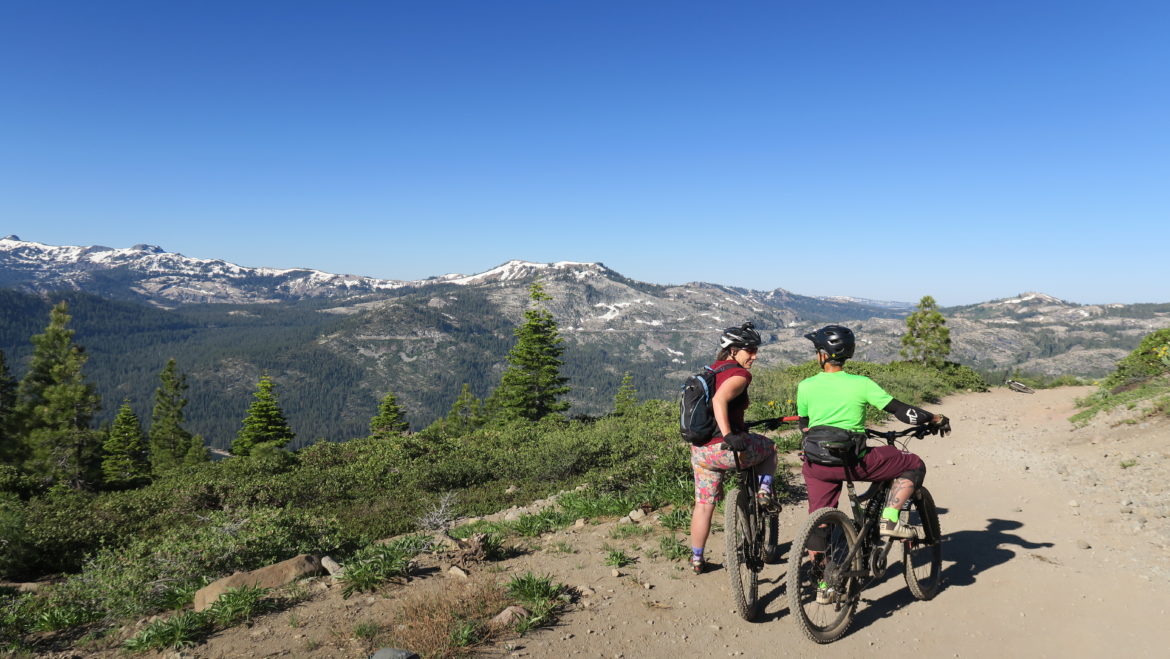 Run number two, Big Chief and Deer Creek Trails, brought us alongside the boundary of Northstar and offered the scents, sounds, and scenery of the mountains that always bring a strange déjà vu—a flashback to our pre-wired human history, the hunter-gatherer still wound inextricably into our DNA. Streams burbled alongside, and the occasional deer observed our passing with only the slightest trepidation. Psychotic chipmunks that had clearly busted into some mountain man’s meth lab squirted in front of us, squeaked in horror, ran back, forth, back, etc.—the next logical step surely a tiny rodent explosion.

One more run brought us down to Squaw Valley Park where a beautiful lunch spread awaited our now blissfully dirty faces. Turkey wraps, vegetarian options, chips, cookies, fruit, and sodas were downed in the shade while we recounted heroics, fails, flails, and sails of the previous three runs. Back in the van, on the next section of Martis Peak, 4th of July holiday traffic had us van-bound longer than expected. However, none of our sweaty, digesting multitudes seemed to mind the after-lunch rest. We friends were gathered from across three states—Nevada, California, and Colorado—and the van was filled with the chatter of connections old and new. 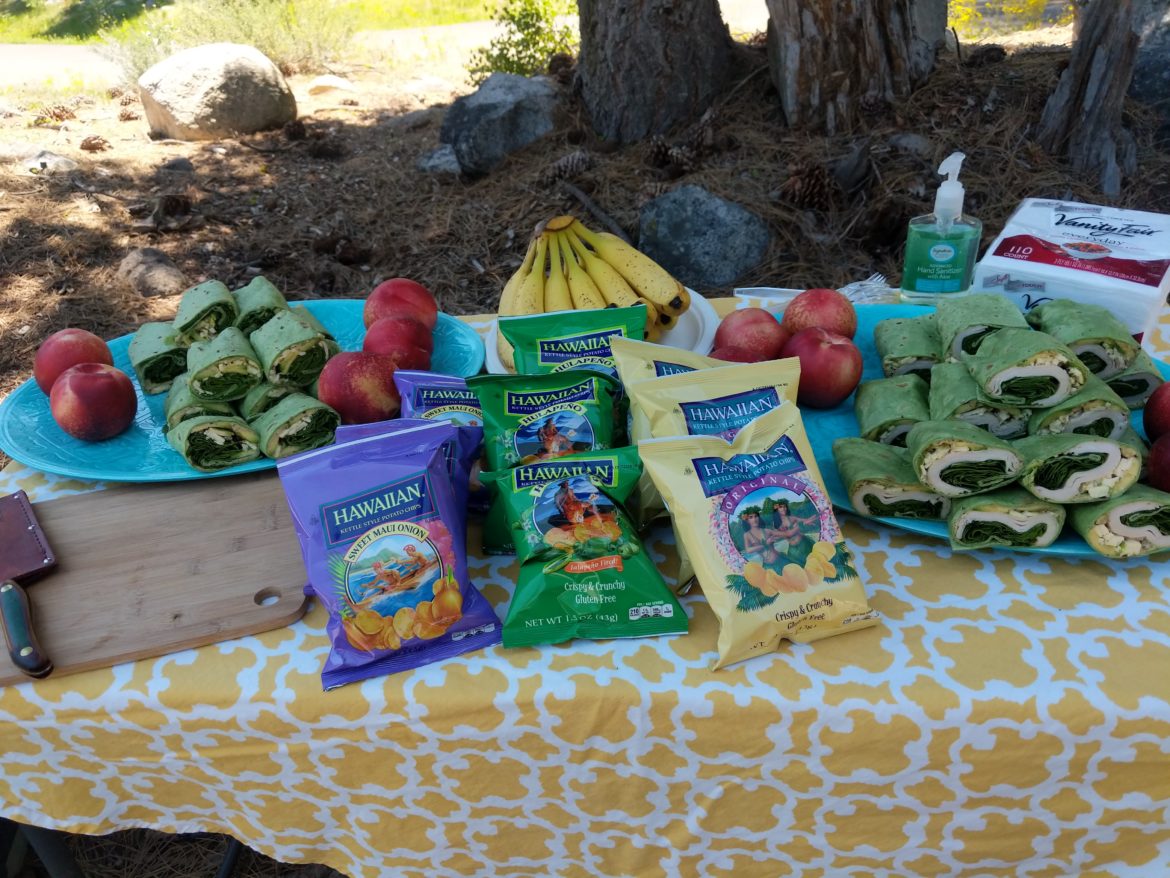 The Martis Peak to Brockaway segment of the Tahoe Rim Trail (TRT) is one that nourishes the MTB soul, that converts the non-believer, that stokes the stoke. There are times on a ride—we’ve all felt it—when you hook into a channel, tap a vein of energy, and your riding becomes poetic. You and your bike are in blissful unity, an effortless marriage—two souls into one. The leaves of the trees you pass seem to wave and clap, the rocks to congratulate your safe and stylish passage over their spines and spires. Judging by the hoots and hollers floating back to me from the riders ahead, my peeps agreed.

This segment of the TRT starts flowy and fast, and gets progressively more technical near the bottom. Granite rocks with sparkly inflections make for a descent that notches up the challenge slowly, giving your skills time to adjust. Like the proverbial ‘frog in water,’ but in a good way—slowly amping up the fun, instead of slowly boiling to death. 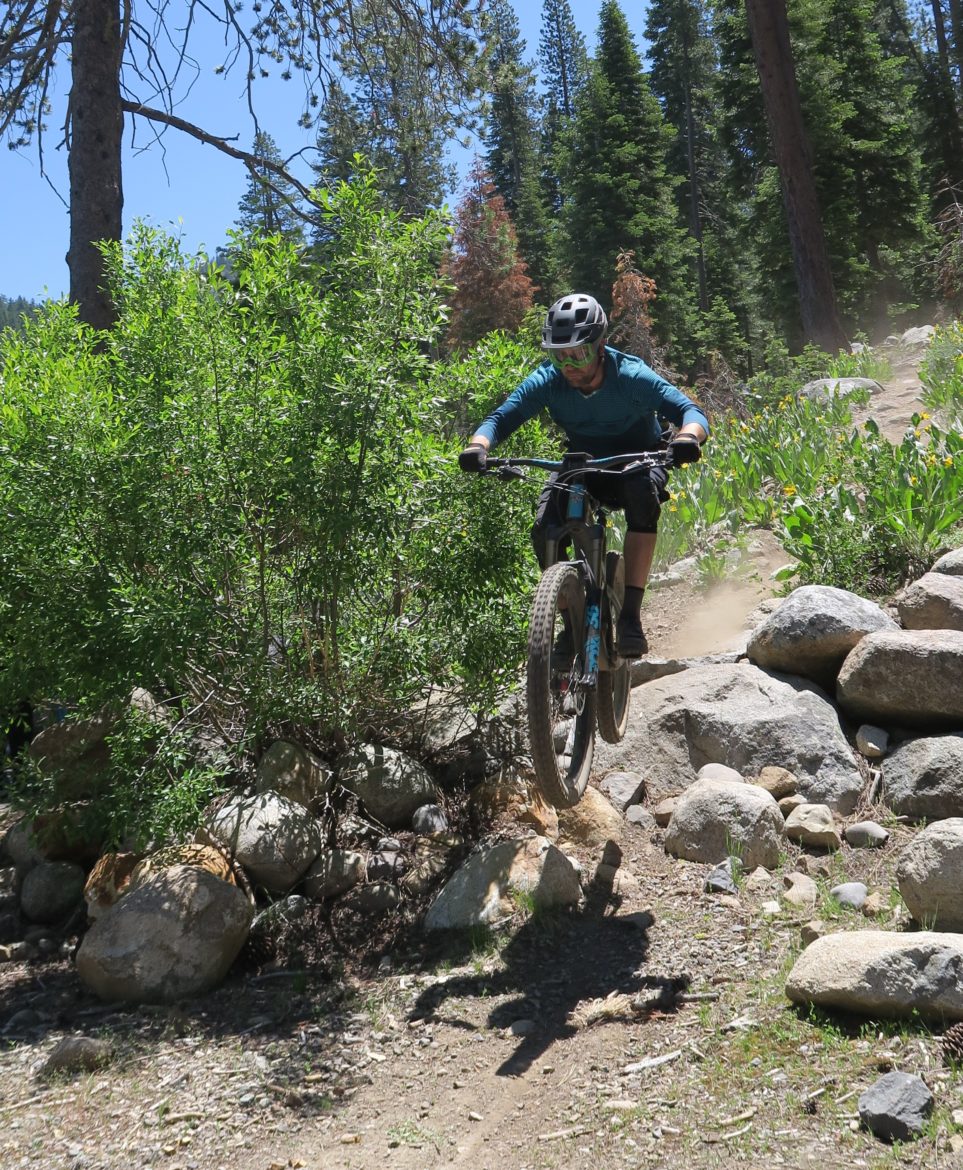 Hikers offer an additional challenge on the bottom half of the Martis Peak to Brockaway segment. Lots of them. Coming up, going down, with children, with dogs, mostly with smiles and kind words, some with small hints of annoyance playing at the edges of their eyes. Coming from Marin, California, and feeling a stupefied sense of wonder at these trails being actually legal, we were all delighted to err on the side of extreme yielding, and potentially over-the-top politeness.

“Hi! Oh no, YOU first! You look fabulous today—and smart too! Would you like a snack?”

Okay, I exaggerate, but only slightly. It’s just really nice to ride your bike on really nice singletrack and not feel like a damned criminal.

Our last run was the most technical. Half of us whooped it up on jumps and drops, half of us (myself very much included) used every workaround and chicken line on offer. Despite its complexity, I was still feeling the mojo, still enjoying marriage after almost seven solid hours of it.

Suddenly, on a stretch of trail much like that preceding it, my bike served me divorce papers. No warning, no “um, I think I need some ‘me time’?” just BAM. Done. The channel I’d been tuned into was now static and screech, the former poetry now garbled epithets and fart noises. I didn’t crash or anything, just became terrifically unable to ride a bike. If braking was needed, I accelerated. If acceleration was needed, I grabbed both levers and squeezed like the Grand Canyon was pulling at my front wheel. Fortunately, this rough patch in our relationship was short-lived. Once my bike was back atop the Dirt Gypsy van, safe from my ineptitude, she forgave me. 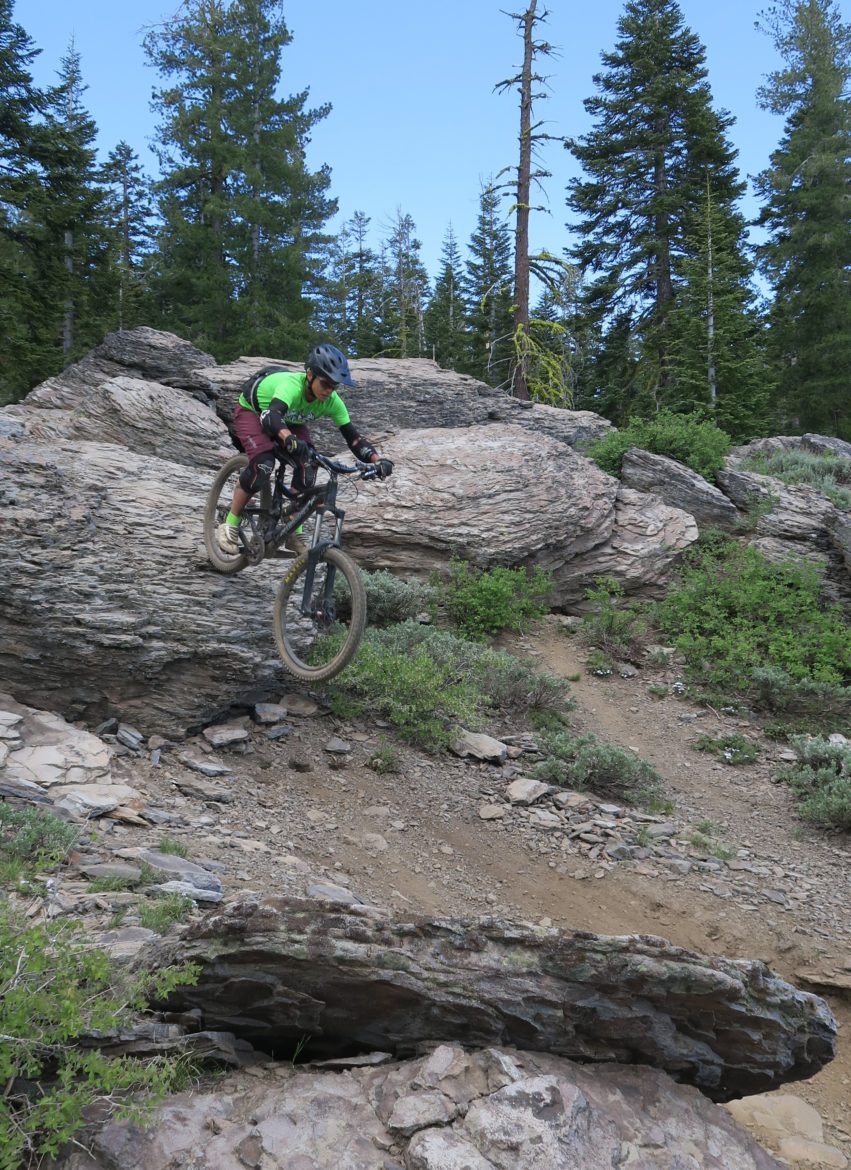 Our day ended at the Northstar parking lot with another spread of snacks and beverages, now including beer. The cold juicy watermelon and salty snacks inspired a feeding frenzy like you see on a wildlife channel. Sweat, dirt, watermelon juice, and happiness glued us all together there at the end of a great day of riding, sharing our collective passion for bikes, trails, adventure, and our magnificent public lands. And while you certainly can put together this same 28-mostly-downhill-mile itinerary on your own, at $150 per person including lunch and beer and snacks post ride, it’s hard to imagine a better deal.

Thanks for sharing, although I could have done with a little less poetic and descriptive jargon.