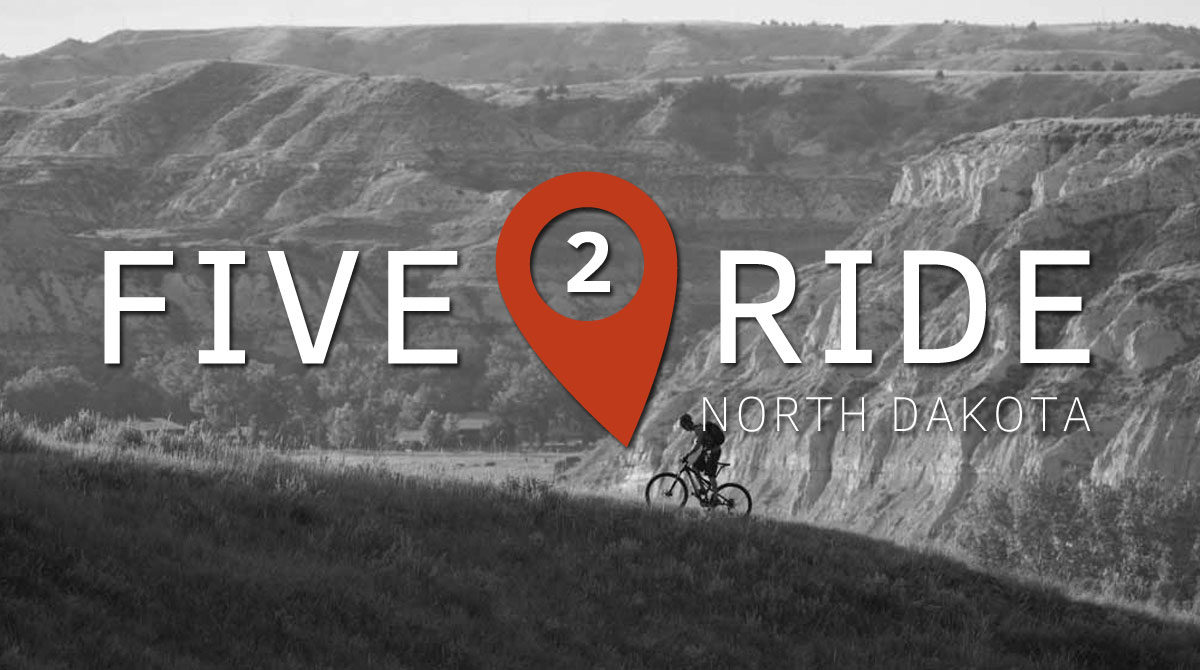 Not long after discovering mountain biking and becoming obsessed with the sport, I learned I was to be transferred to… North Dakota! Really? Did the powers that be not realize they were ending my life as I knew it? I couldn’t help but think of the line from the Jim Croce classic, “Time in a Bottle” – “but there never seems to be enough time to do the things you wanna’ do once you find them…”

But all was not lost. It turned out there was some fine riding to be found in our northernmost prairie state. Among the canola, sunflowers, and now, energy extraction, is some fine singletrack, including an IMBA epic ride.  Here are five fine venues well-worth sinking your knobbies into:

Just 20 minutes north of the state capitol, Bismark, sits Harmon lake, a body of water, like many in North Dakota, prized for its game fishing. But with a 13-mile loop of fast and furious singletrack ringing the hills above the lake, I’d much rather bring my bike.

“This is one of those hammer type trails, it has pretty good flow out in the open but can be a little tight when in the trees. Views of the lake are awesome in the evening.” – mtbark

What the Lake Metigoshe State Park lacks in terrain it makes up for in dense woods uncharacteristic of North Dakota. The greenery-focused scenery belies the location in the middle of the prairie. Riders of all ages and abilities can enjoy anything from an hour to a half-day spinning through the woods around North Dakota’s prettiest lake. Sitting on our northern border, it’s also easy to turn this into an international affair by adding a ride in Canada’s Turtle Mountain Provincial Park to your day at Lake Metigoshe.

“During the fall of 2012, 5 1/2 more miles of professionally built trail were built in the park. The new trails are fun, flowy, and scenic. These trails can be enjoyed by anyone with reasonable biking skills. You also do not need a full suspension bike for these trails. I have biked on quite a few professional trails and this one is just as fun as many of those trails.” – Todd Sivertson

The Long’s X Loop actually rides as a reverse lariat loop; a loop to start with the stem at the far end.  Although one side of the loop, and the stem, are comprised of the northernmost segment of the famous Maah Daah Hey trail, it is cut off from the rest of the Maah Daah Hey by the intervening North Unit of the Teddy Roosevelt National Park and Theodore Roosevelt Wilderness, so it stands alone as a mountain bike ride.  This ride has all the great badlands terrain and scenery the North Dakota Badlands are famous for, but with none of the people found at the southern end. You want solitude? This is the place.

“Very fun trail, beautiful scenery, one of my favorite rides in North Dakota. My first time on the trail was with my 8-year-old daughter, and she did great–we went a little slow, rested fairly often, and it was a very enjoyable daddy daughter day.” – bheath

The Maah Daah Hey Trail is one of the original IMBA Epics, and rightfully so. Over a hundred miles of singletrack through dramatic, uninhabited badlands is the very essence of an epic ride. In addition to a century ride’s worth of remote, pristine singletrack, the route offers many unique features, like a deep crossing of the often muddy Little Missouri River, an optional side trip to a year-round ice cave, and the infamous Devil’s Pass, a narrow fin connecting two plateaus, steeply eroded on both sides. People come from far and wide to ride here, and it’s easy to see why.

“This trail is incredible! 5 others and I went to see what it was all about and we were astounded! In a nutshell; 6 guys, 3 days, 68 miles, unbelievable scenery, fast downhills, painful climbs, 1 flat tire and pretzeled rim, 13 total ‘countable’ biffs, no major injuries, and an outstanding experience.” – Redding

Turtle River State Park lies about 20 minutes west of one of North Dakota’s larger cities, Grand Forks. What this unassuming little park lacks in mileage, it makes up for by making the most of available terrain, and bringing a fun-loving attitude. This is the home of the Extreme North Dakota – Twelve Hour Mountain Bike of Enduring Delirium (END-TOMBED) race, held the Saturday before Thanksgiving. Being North Dakota, late October could be sunny and 60… or a full-on blizzard. Add in a few monsters menacing the course, and you’re in for a wild ride!

“Very fun, very short. Fast and scenic path through the woods. The other trails can add some length but the spotlight is the singletrack. Going up and down the riverbanks gives some elevation in an otherwise flat place.” – rbrtsims5