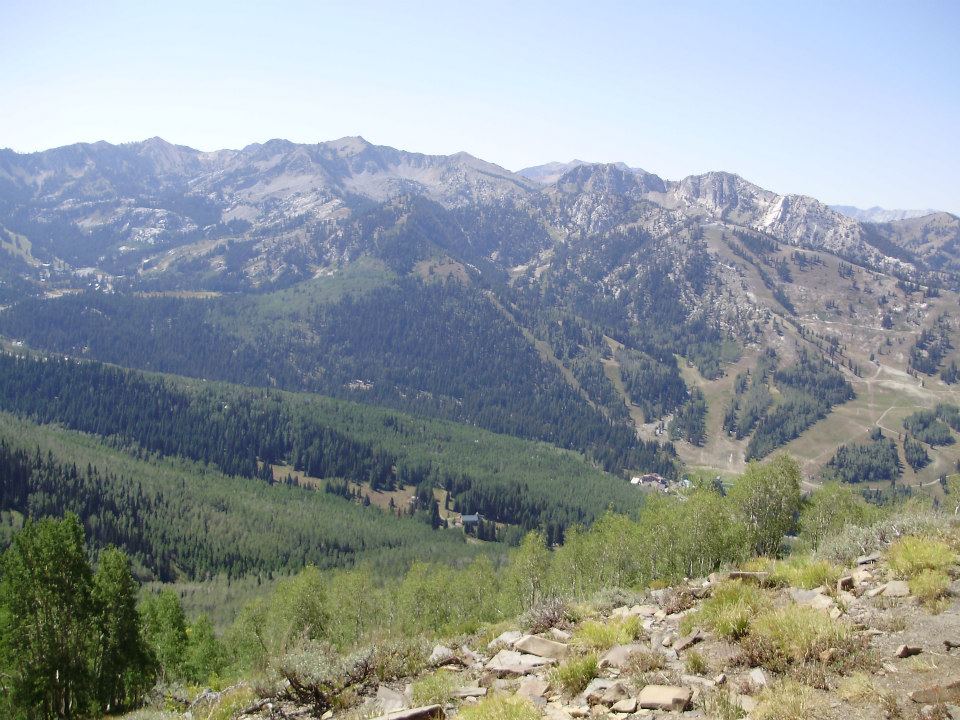 My S.O. kept telling me during our entire road trip, “You’re going to love the Wasatch Crest Trail!” He swore it would be the best ride I did on the trip. By the time we reached Salt Lake City on Friday the 7th we’d ridden about 45 miles of trail and slept in both tents and backcountry cabins. I was ready for a shower, a bed, and the Wasatch Crest.

The trail is about 20 miles long and is really a combination of several other trails: Scott’s bypass, the Wasatch Crest, the Great Western trail, Big Water, Millcreek road and Millcreek Pipeline; we exited at Church Fork back onto Millcreek Road, but you can take the Pipeline further down and exit at Rattlesnake Gulch. There are alternate routes along the way like the Mill D Trail. The upper Mill Creek Canyon section is only rideable by bikes on even days, so if you’re riding on the 31st you’ll have to take the Mill D route, which will take you back to Big Cottonwood Canyon, and shorten your ride.

With the exception of “Puke Hill” and 2-3 other short climbs, the trail is 20 miles of downhill. It’s insane. It starts way up at Guardsman Pass. A piece of singletrack called “Scott’s Bypass” starts the route and leads you around to the doubletrack “Puke Hill.” Once you make it to the top of this, you’ll have views here of Solitude Ski Resort and Park City. The biggest issue with the hill is that there are few flat places to stop, and you’ll really want to stop! Once you do, it’s hard to get started again.

From here you’ll continue left (the right trail is for Pine Cone Ridge) and encounter a bit of zooming downhill, a tiny bit of climbing, and then a great rolling section through gorgeous aspen trees. Soon the “spine” looms into view. This tricky and very technical section of trail is walked by most, though some people can ride it. There seem to be lines on the far left and far right but the only line I took was the one I was walking down.

More coasting and rolling follows this part of the trail leading first to the intersection with the Mill D trail and then to the “baby spine”. The section just after this, in the canyon, was one of my favorites. There were creeks to blaze across and dark forests to wind through. When I stopped and realized there was mud on my glasses I grinned from ear to ear.

After 3 hours we popped out in a parking lot and my boyfriend said, “Well we’re halfway done!” I took a deep breath and prepared for more downhill; I was tired but I wasn’t going to let anything stop me from enjoying my first experience on this trail. We took off down a section of paved road. Flying around corners, my tires zinging and whistling on the pavement, I began to feel better. Nothing was going to stop me from enjoying this ride. At the turn for the Pipeline Trail I downed the remainder of my last Clif bar.

The Pipeline section was different from any of the other sections of trail. It had some exposure but mostly rolled along high above the canyon floor through a tunnel of trees. I kept stopping to look at the fall colors peeping through. Though I was tired I reminded myself that I was on one of the most well-known bike trails around. I took my time wandering through the trees.

After some insanely steep switchbacks meant more for hikers than bikers, we reached our stop at Church Fork. The Pipeline trail continues further, to Rattlesnake Gulch, but we decided to hit the road a little sooner. We cruised down the road and back to where we’d parked at 3900 S and Wasatch Blvd. Originally we had a shuttle ride reserved with the “Wasatch Crest Trail Shuttle” guy but our shuttle never showed. He says he did, but I’m not sure how three people looking for a van with a trailer could have missed him. Since my boyfriend and our local friend both had ridden the trail 50 or so times, we just drove one car to the top and created our own shuttle. It was fine, but it did take more time (especially after we’d waited half an hour extra on the shuttle).

I’m so glad that I had the chance to do this ride and I can’t wait to do it again. It’s a must for any serious mountain biker. The views, the miles of downhill, and the fish tacos at Lone Star Taqueria afterwards are absolutely worth any amount of travel time.

This trail has been on my wishlist for a while now, sounds like you had a great trip!

+1, can’t wait to try this trail out sometime!

Very nice. Thanks for sharing.

If anybody’s looking for corroboration, then I’ll second that motion. The Wasatch Crest is a spectacular epic with lots of options available. Utah is more than just Moab and the alpine riding there rivals the best in the nation.

Was “Puke Hill” technical or was it “just” a sit and spin?

I live in Salt Lake. The Crest is awesome. Very very popular, too. Some days it can get suffocating there are so many people on the trail, but that’s just a testament to how good a trail it is.
Puke Hill is a sit and spin. Very long, very steep. You feel an accomplishment when/if you clean it.
Glad you had a great time. Plus dinner at Lone Star?! Very nice. I live a few blocks from Lone Star and feel the gravity of it’s deliciousness pull me in far too many times.
As a previous commenter said, Utah is more than just Moab. We have miles upon miles of spectacular alpine singletrack up here in the northern part of the state.

@Jared13 – I second what @AnaisNinja said. Puke Hill is just a grind. There aren’t too many places to stop and rest though, and that’s what got me. I couldn’t find a flat place and so when I did stop I couldn’t get going again.

@AnaisNinja – If we’re in town for multiple days we have to stop by Crown Burger too!

Yes, Crown Burger. The pastrami burger will kill you (or wish it did) but damn if it ain’t tasty! 🙂

Yeah, that’s the biggest problem with Puke Hill. You cannot stop, because once you do you’re screwed. It can get loose and the back tire often spins out, too. The key is maintaining that cadence the whole way up, without puking!

Oh man, those sit and spins can be deceiving! When they have technical aspects thrown in, I expect to get beaten up and redline the heart rate here and there.

With sit and spins, I just keep trucking along until I can’t see straight! Not a good thing.

@Jared13- Exactly. That’s what makes Puke Hill such a bitch. She’s long and and you’re redlined for so long. But, it’s so worth it for the sick, flowy downhill waiting for you at the top!