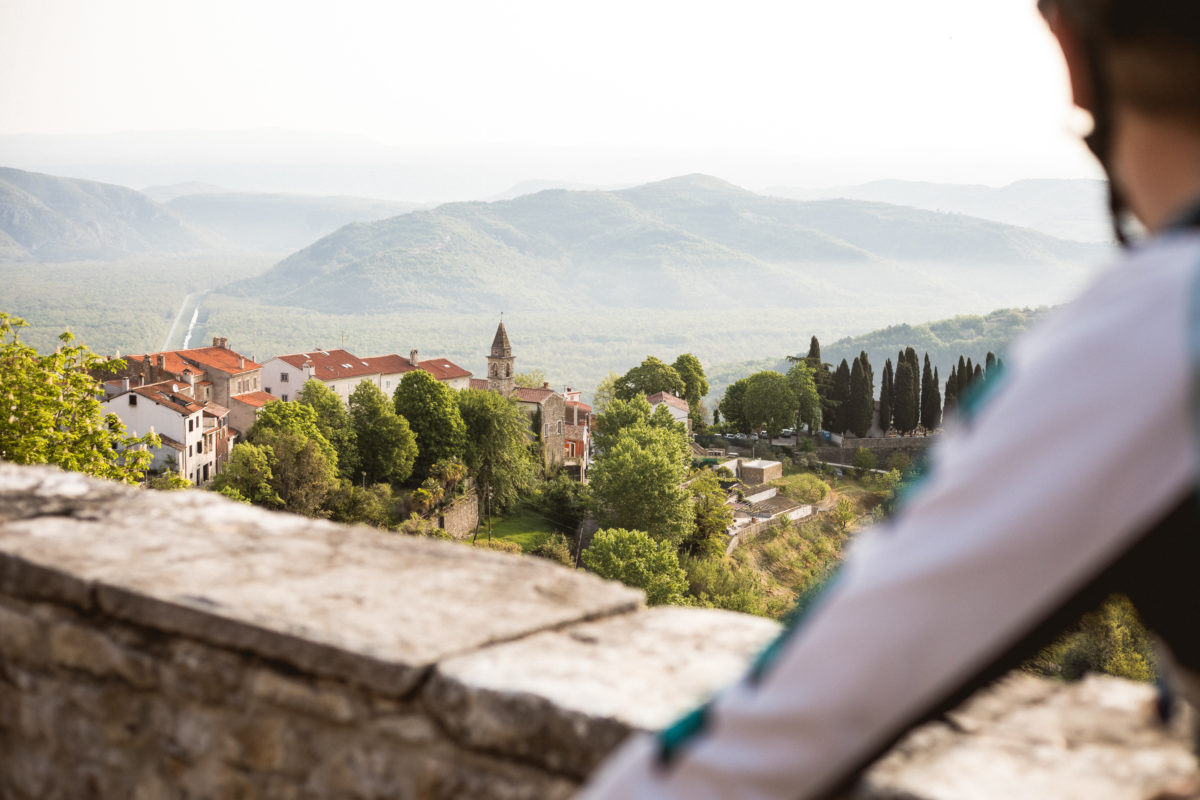 With the clang of a church bell a flock of pigeons are disturbed from their roost and explode into the early morning haze. From the walled vantage point over the valley floor below, I momentarily step back into the medieval ages, but quickly snap to as I glance down at the blue fluorescent bike leaning up against the stone wall. 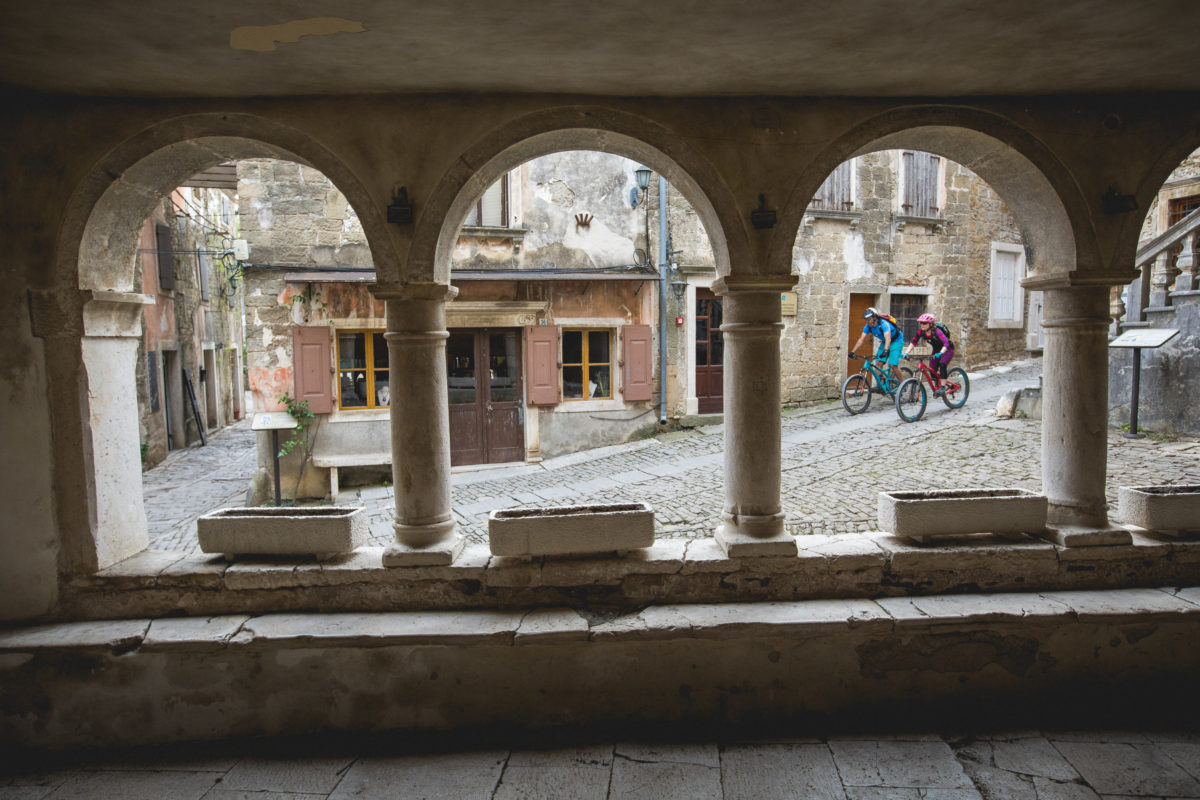 Rumbling over cobble stones once used by hooves and carts we pass through the old guarded archway of the walled hilltop village and begin to sniff out the other Istrian delicacy that isn’t truffles but trails; far away from the hordes of crowds attracted to the south after shooting to fame in the TV series Game of Thrones. We had our own fable to conquer, minus the dragons and bloodshed, mind you…

Having left home in the snow and seemingly jumping ahead a full season, spring is in full swing with the color and saturation cranked up. An old farmer complete with flat cap and checkered shirt potters slowly up and down his field, turning the soil. 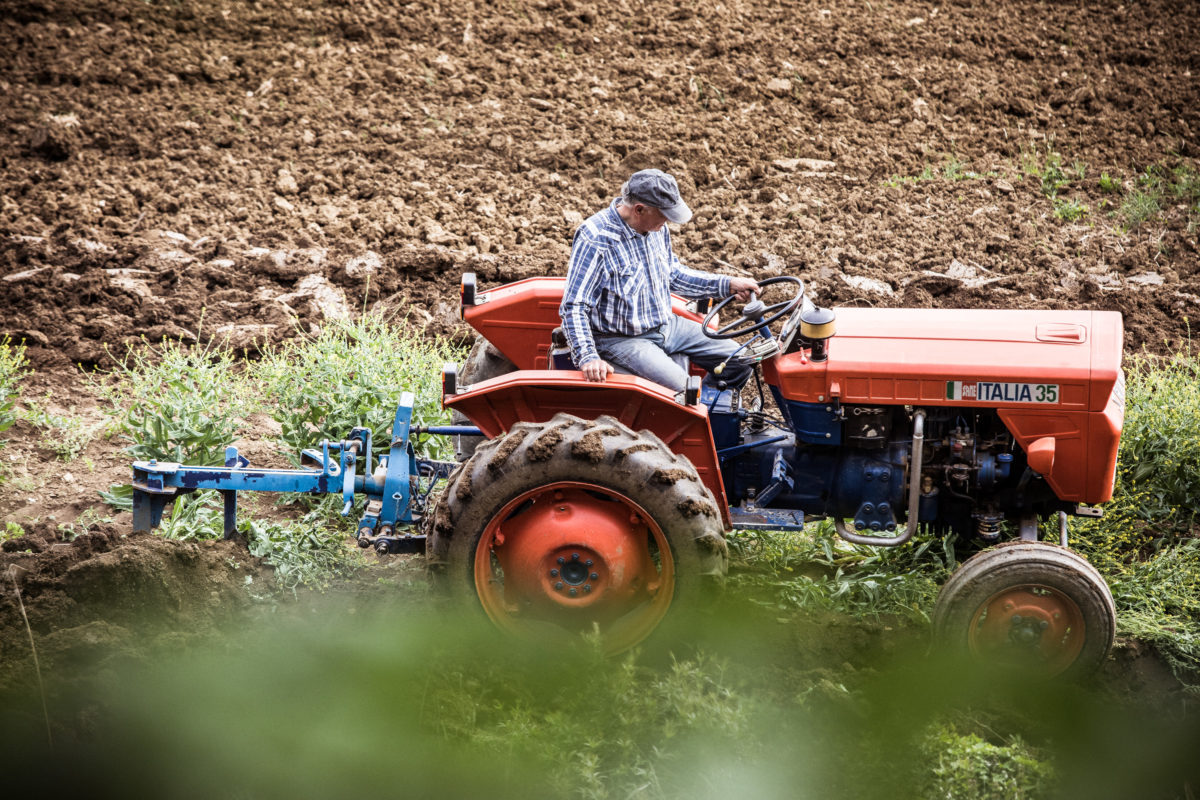 Briefly joining the disused Parenzana railway line before diving into the damp darkness we cut through the hillside, rejoining the daytime in Grožnjan. Stopping to catch our breath beside a well filled with meandering gold fish, a local appears from his garden with a box of ruby red strawberries straight from the vine. He stops briefly to hand us a portion before continuing on with his day. A hospitable generosity that seems to run through the breadth of Istria.

From the crest of the hill you can make out the coastline on the horizon which would be our marker for the next few days as we travelled from the green of the countryside to the blue of the coastline. Leaving the open we penetrate the dense vegetation with a lace of dusty singletrack leading us into a rollercoaster of fast, flowing turns – a trail that left all abilities in the group grinning ear-to-ear. For a relatively small hillside, Grožnjan has a substantial trail network which was used for a recent Enduro race, meaning we were more than happy to spend the afternoon lapping it up until the lure of food pulled us back to the hotel, although not before scaling the climb back to the hilltop village of Motovun. You soon realize why it was once such an advantageous position to have! 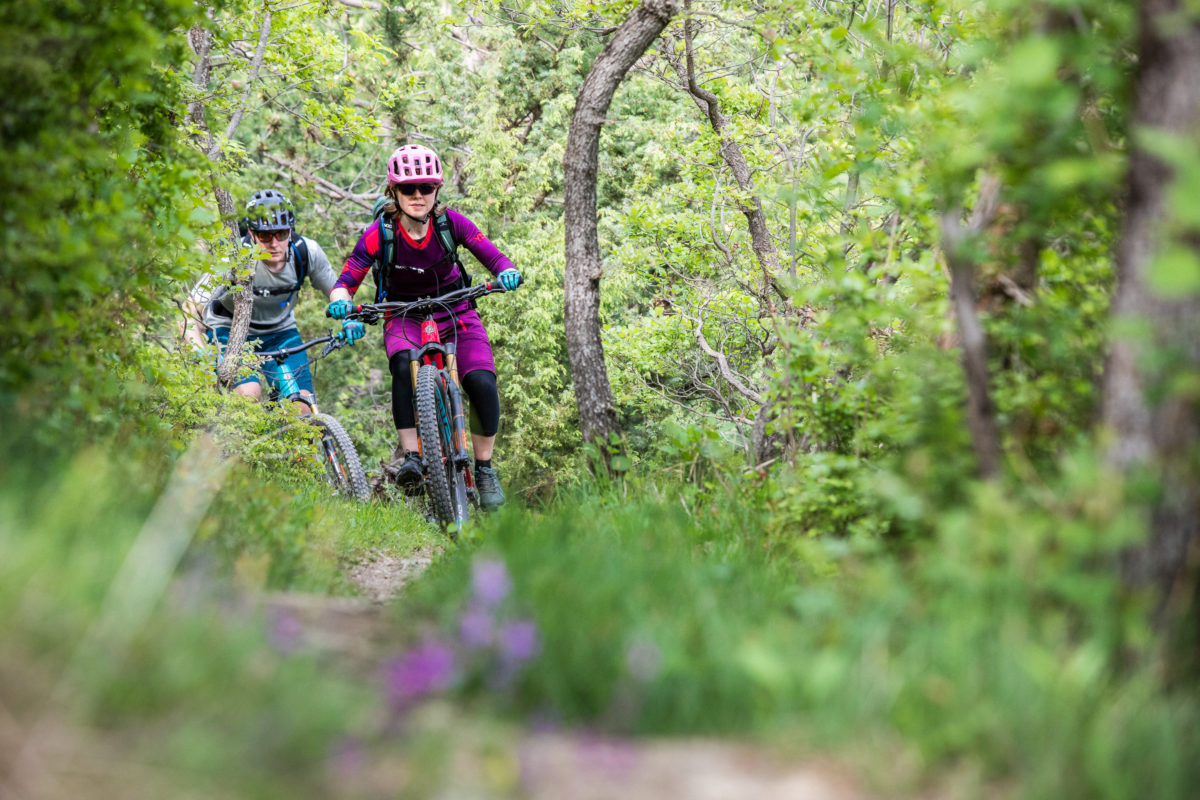 We didn’t take much persuasion when it came to dinner time. Sitting in the courtyard beneath a towering chestnut tree we had a feast fit for a king with the menu alarmingly difficult to pick from. Gnocchi, patties, fish, pancakes, pears, all swiftly devoured and helped down by local beer and wine of which our bodies felt the full effect. So with the conversation tailing off, waistlines expanding, and eyes beginning to shut, we headed for bed. 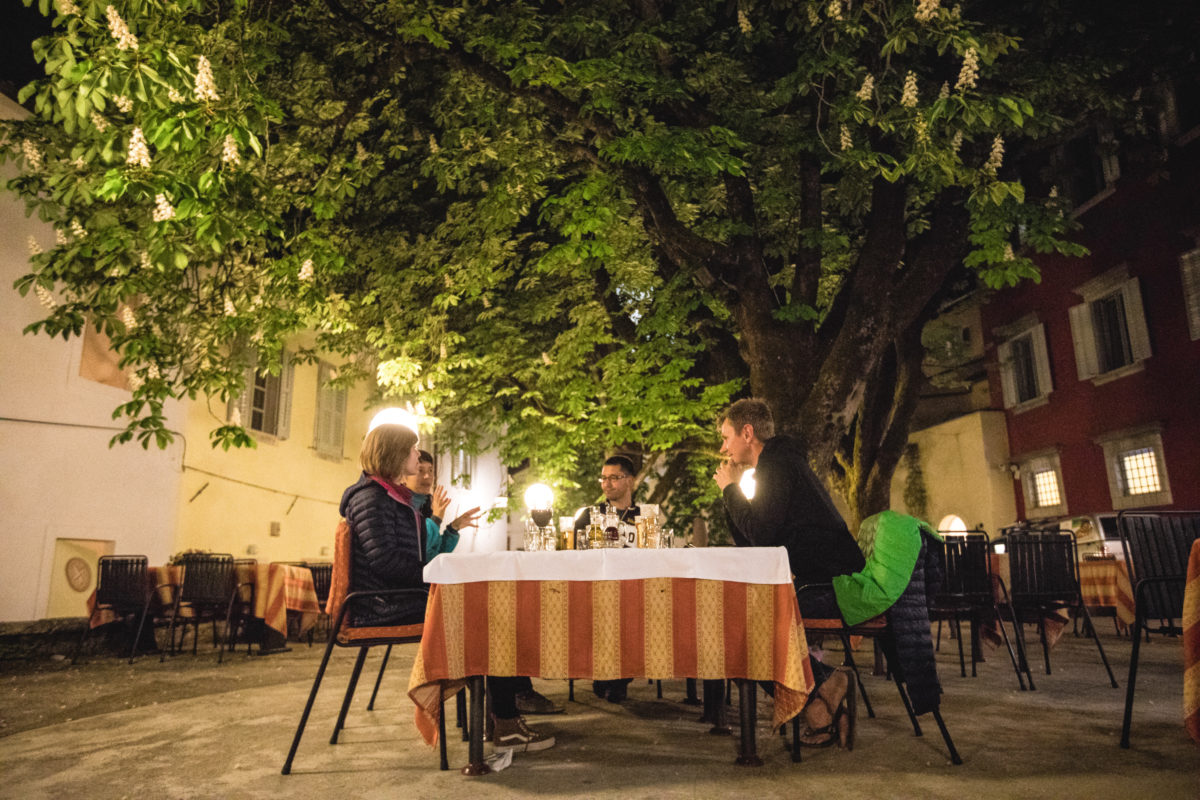 Clawing at my alarm I grab my riding kit in haste as I rush, worried the others would be waiting for me at breakfast… I needn’t have stressed! I polish off my coffee as Cat and Euan rock up, hot on the unmistakable scent (whether they wanted to be or not!) of the local truffles which surprisingly seemed to feature quite heavily at breakfast too. We mull over the plan for the day which was to head south and to the coastline; a lap of the Kamenjak peninsula before checking out the picturesque fishing port of Rovinj and moving onto our base for the final few days on the island of Krk. 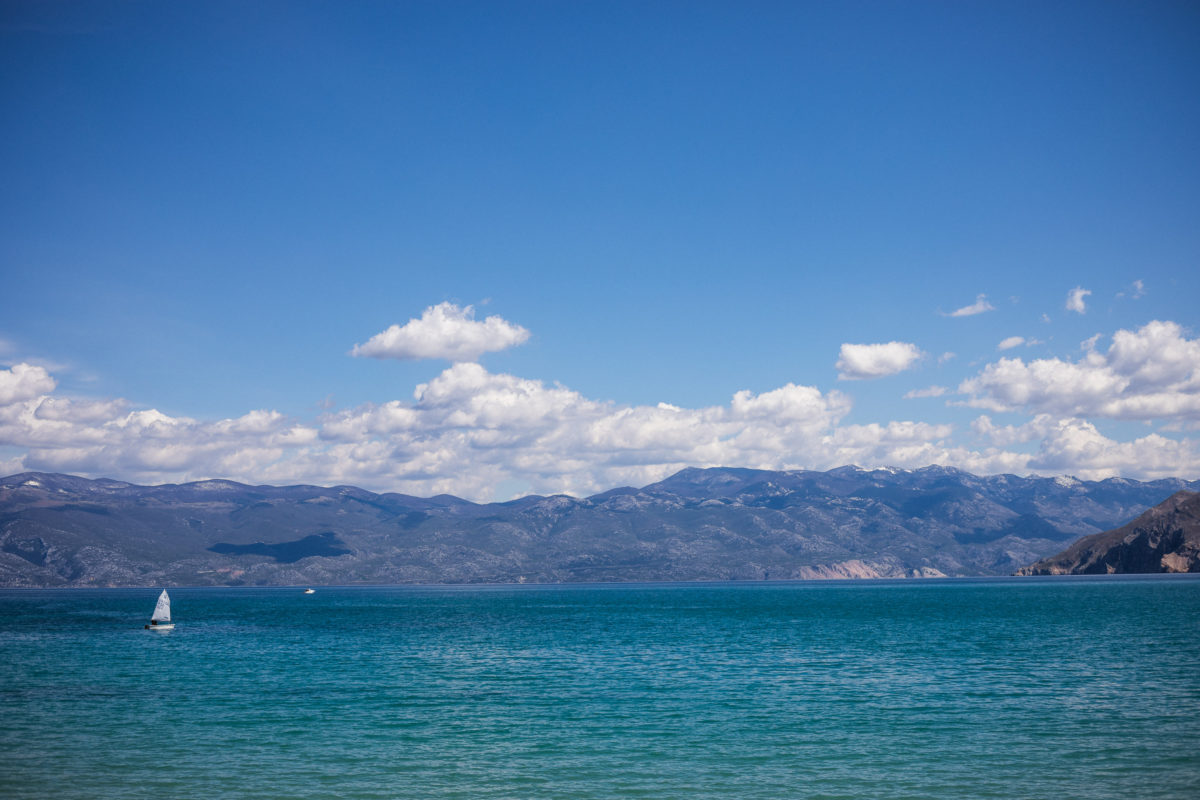 It doesn’t take long before we’re skirting the coastline with the shimmering Adriatic in full view. We ditch the van in Premantura, grab the bikes and after only a few minutes of pedaling are snaking through the pine with the lure of the sea constantly flirting with us. Soon enough we burst out of the trees and land on the rocky coastline, slapped full force by the sheer beauty of the turquoise waters lapping onto the pebbles. Staring bewildered, it’s Danijel who breaks the daydreaming, promising us the best is still to come as our wheels begin to point consistently uphill for the first time all day. 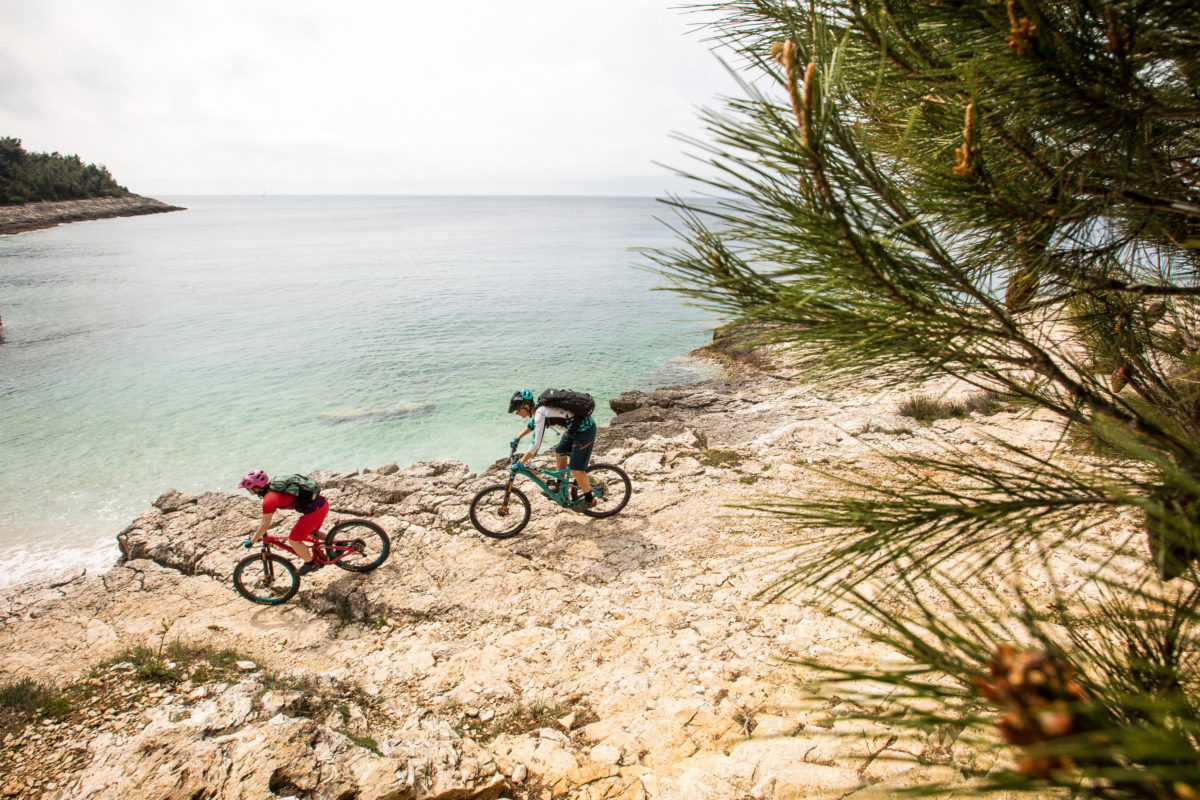 The area is a popular holiday destination but it’s not hard to find a little more tranquility thanks to pedal power, though we did encounter a few families out hunting for asparagus through the undergrowth. With the sun beginning to slump further into the sky directly in front of us, we reach the top of the ridge with a narrow strip of trail seemingly tailing off into the water below. We don’t hang around long before launching into it, starting fast and straight in the open before the vegetation shoots up around us and we begin to play in the dappled light bursting through the bushes. It’s always the trails that catch you unawares that are the most memorable. This trail offered a contrast with our morning loop, yet they both complemented each other perfectly. We chased Danijel and Euan as they set the pace out-front, setting up and playing on completely different lines over the smooth rocks. Popping back out at the van we didn’t need to say a word, the grins said it all. 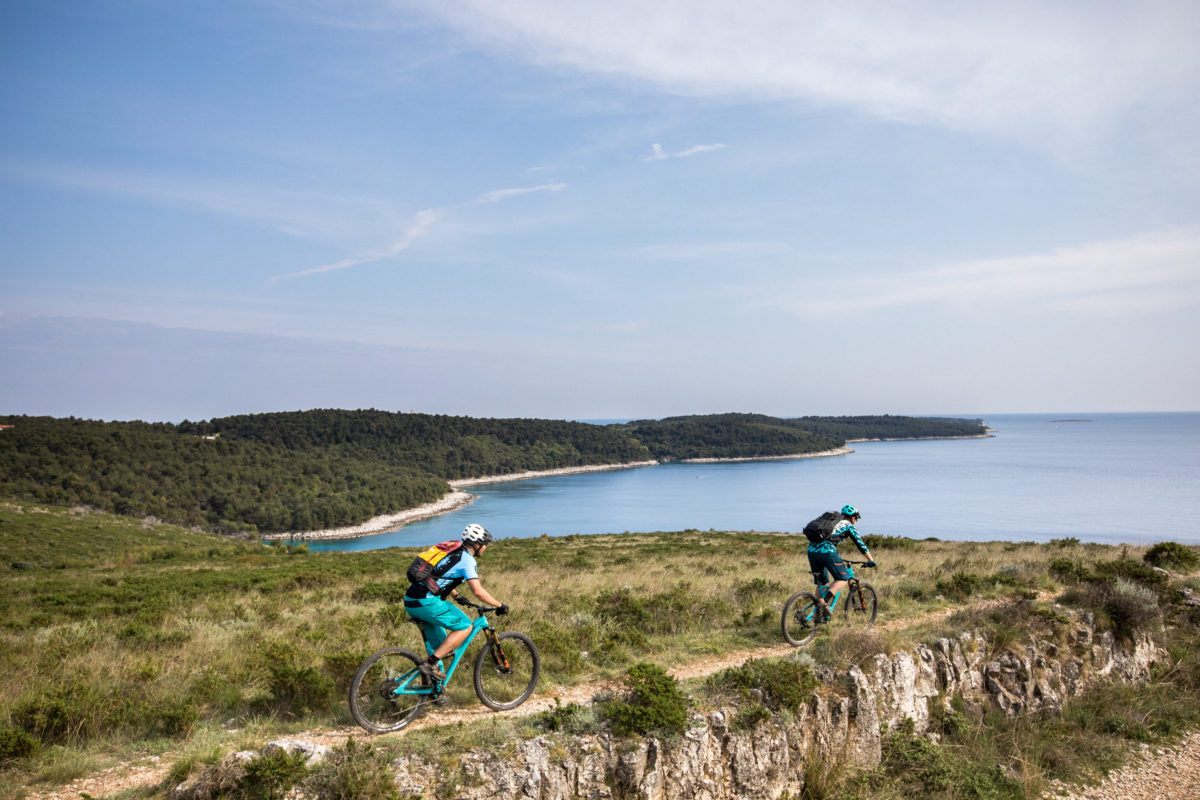 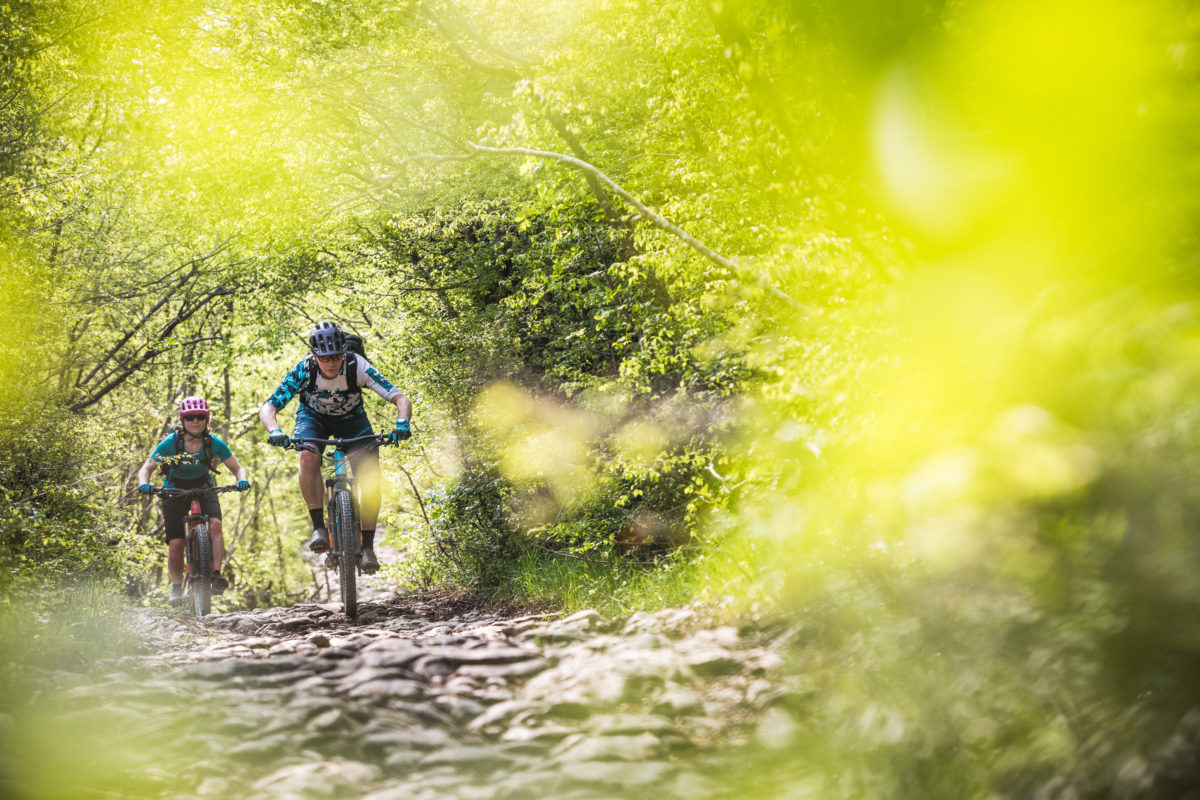 Swapping bike kit for more comfortable and slightly less sweaty clothing, we stroll alongside the colorful harbour front of Rovinj as seagulls swoop overhead searching for any scraps that the fishing boats may have discarded. It seems only right we perch ourselves on the seafront to tuck into some of today’s fresh catch, with the iconic St. Euphemia Church towering over the houses clinging to the hillside in full view. It’s dark by the time the wine bottle runs dry. 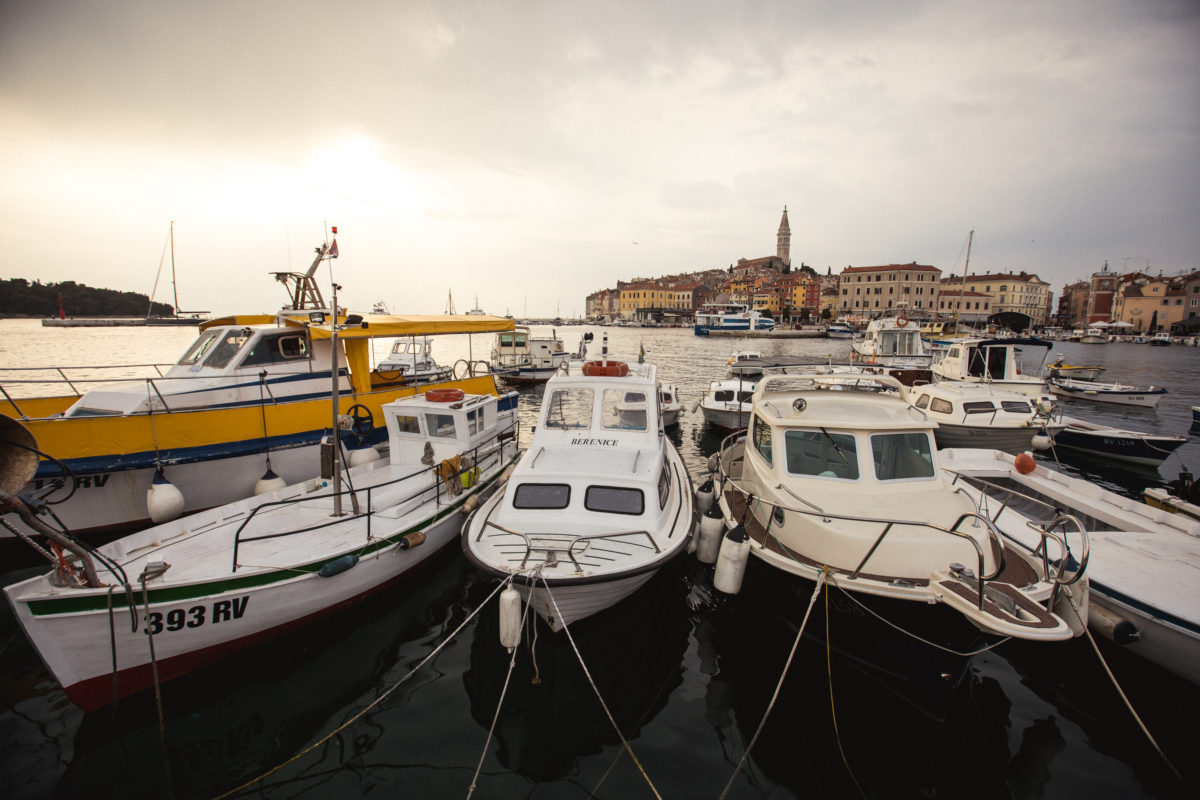 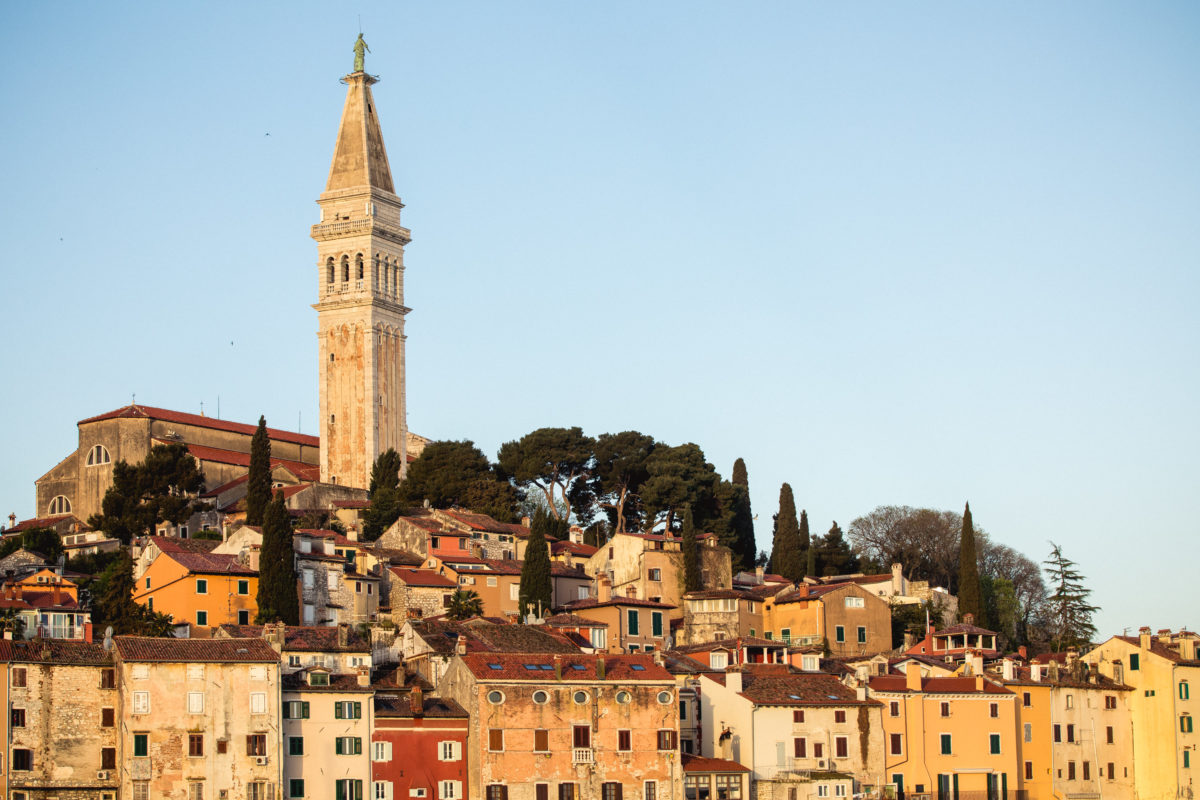 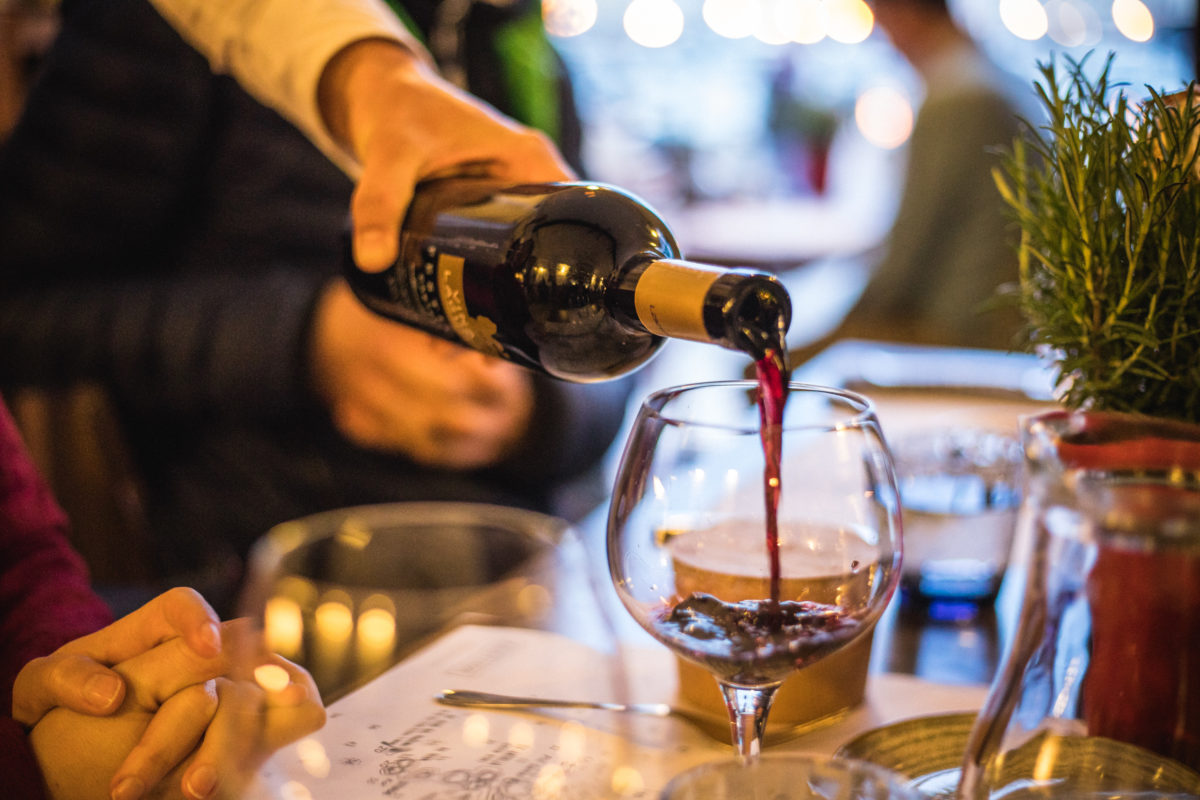 We head south to the island of Krk, unaware of crossing over the small bridge that connects it to mainland Croatia – this is where our trip would end, but not before another day of riding. There’s always an uncertainty of what the day will bring after you arrive somewhere late at night. A quick scan from the balcony in the morning revealed what looked to be the biggest hills of the trip, on either side of us, and we’d be riding both ridge lines! 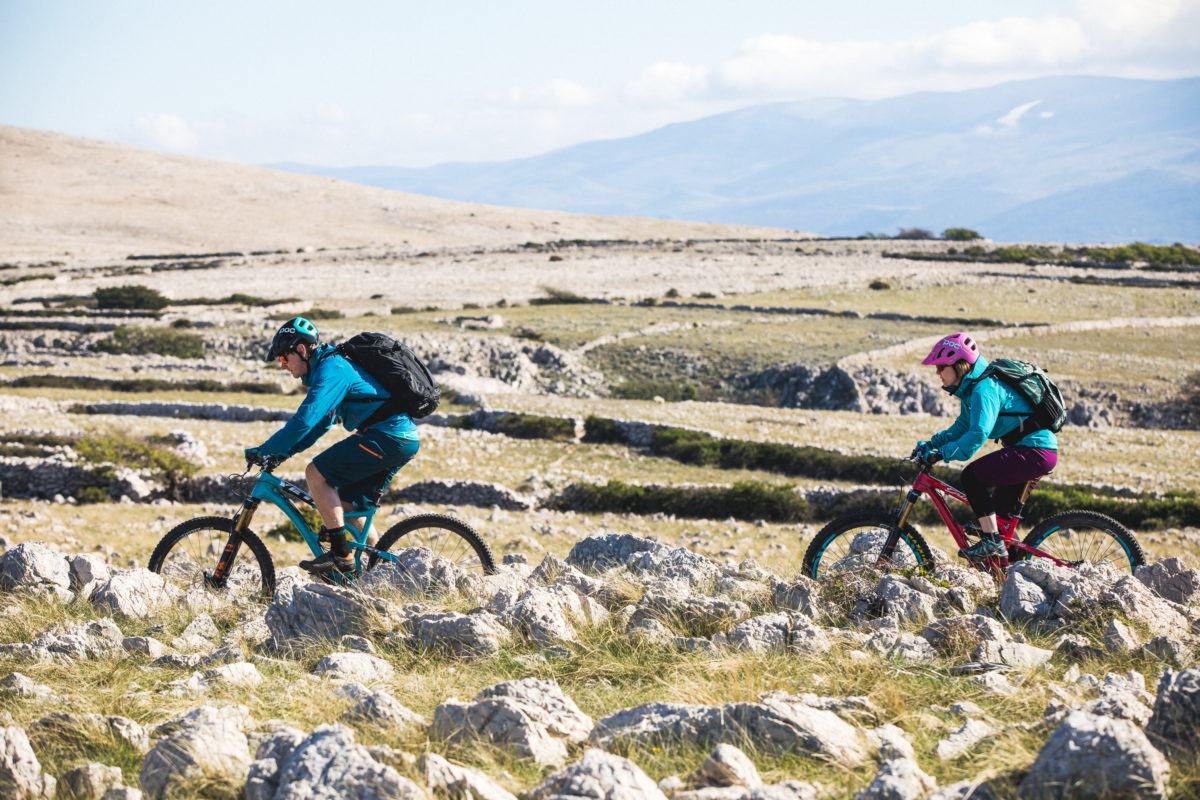 Grinding at the pedals we make our way up an old Austro-Hungarian military track, and it quickly becomes apparent how different the landscape and terrain are to what we’d experienced in the days prior. The hills were much angular and rocks more abundant–a lot more abundant! We gain quite a lot of elevation, but the climb is far from savage as it traverses back and forth across the hillside. The trees suddenly end and reveal a landscape which can only be described as what I expect the surface of the moon to look like. My eyes struggle to cope with the detail and textures of the billions of rocks on the surface. 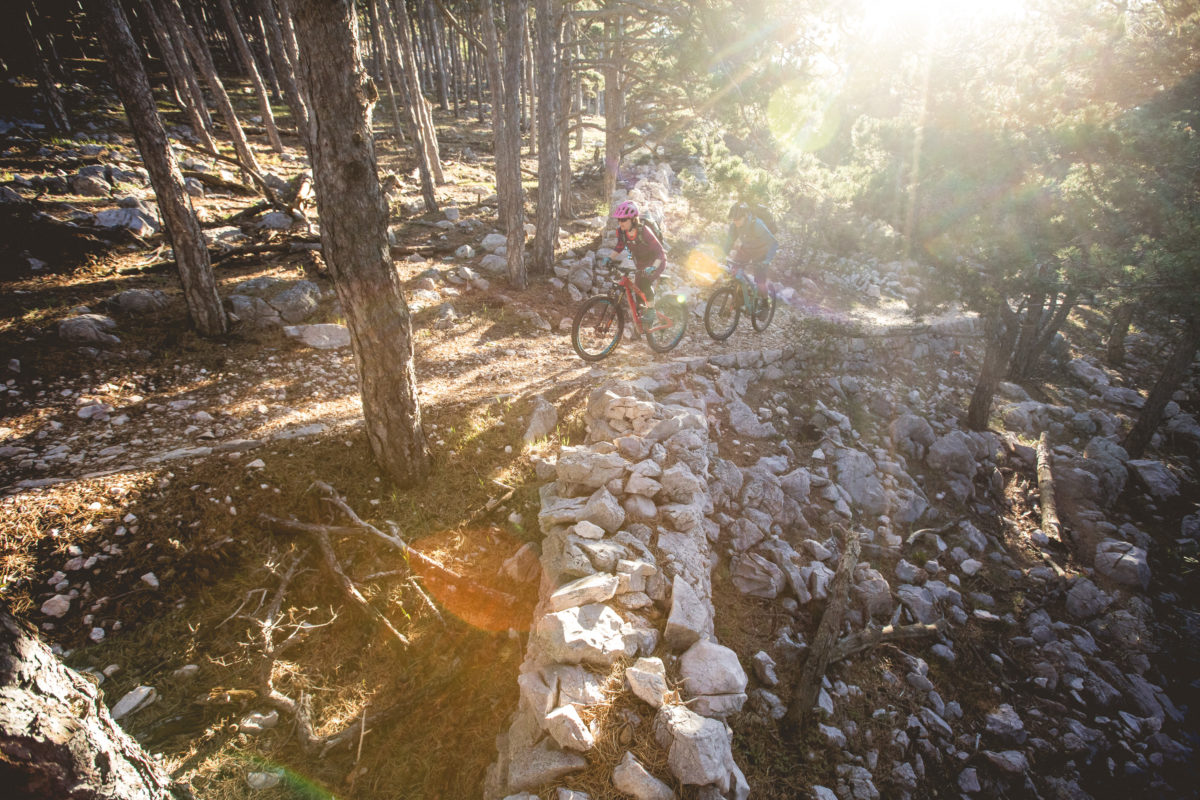 We ride atop the plateau for an hour without bumping into any aliens or other space creatures before the landscape suddenly changes once again. The trees and bushes rise up around us and the rocks disappear. For a moment it feels like we’ve left the moon and travelled to the south of Spain. The gradient is quite gentle which helps prolong the descending time into the seafront lunch stop of Baška, a typical Croatian town with an amazing beach and scenery I had always imagined. We bathed like lizards in the sun making it hard to get going again with the pizza and coffee sitting heavy in our stomachs.

Our Croatian swan song sees us climb the hill on the opposite side of the town late in the afternoon with high hopes of descending under sunset into the town one valley across. Following our guide Danijel, we press on up the mix of tarmac and doubletrack climb, at a pace slowed by our substantial lunch. The summit is ever-present above us with two walkers silhouetted against the skyline, and we push on with the sun, for the moment, hiding behind a blanket of clouds. Once at the summit we are rewarded with a 360-degree panorama over the intricate coastline of the islands, which thrust rather sharply out the Adriatic. 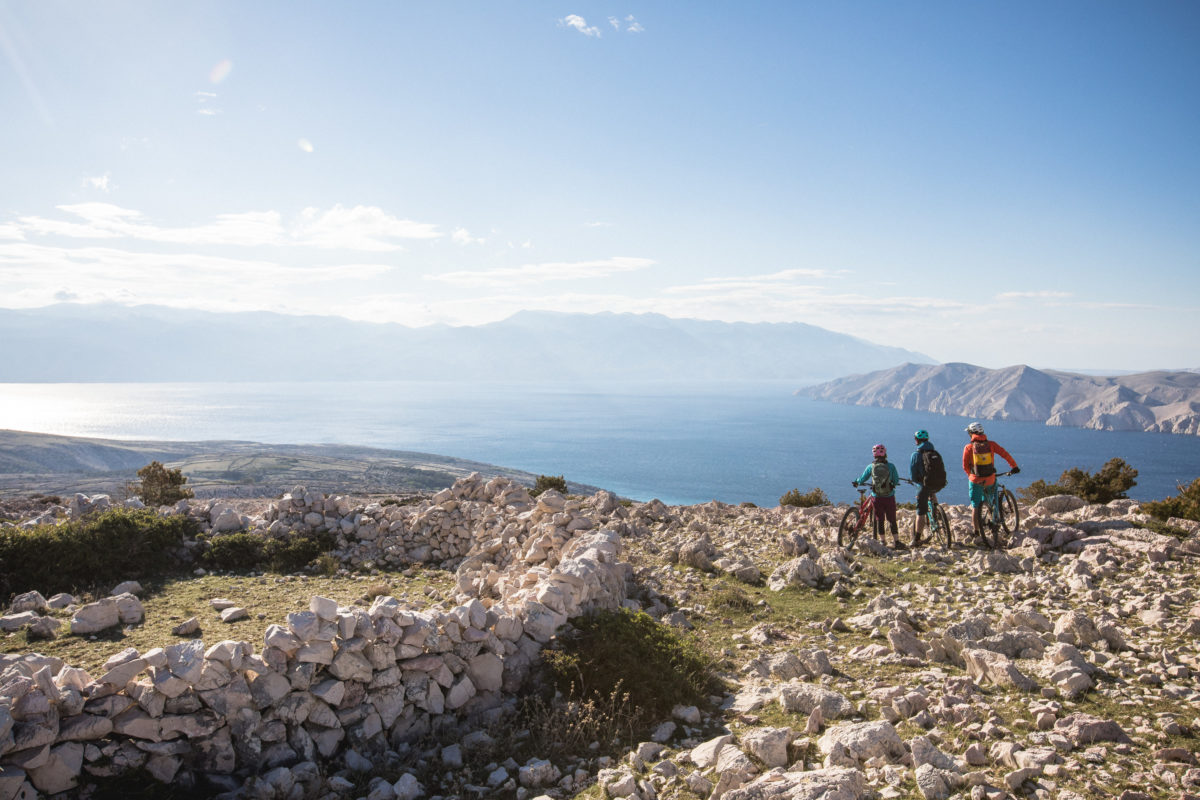 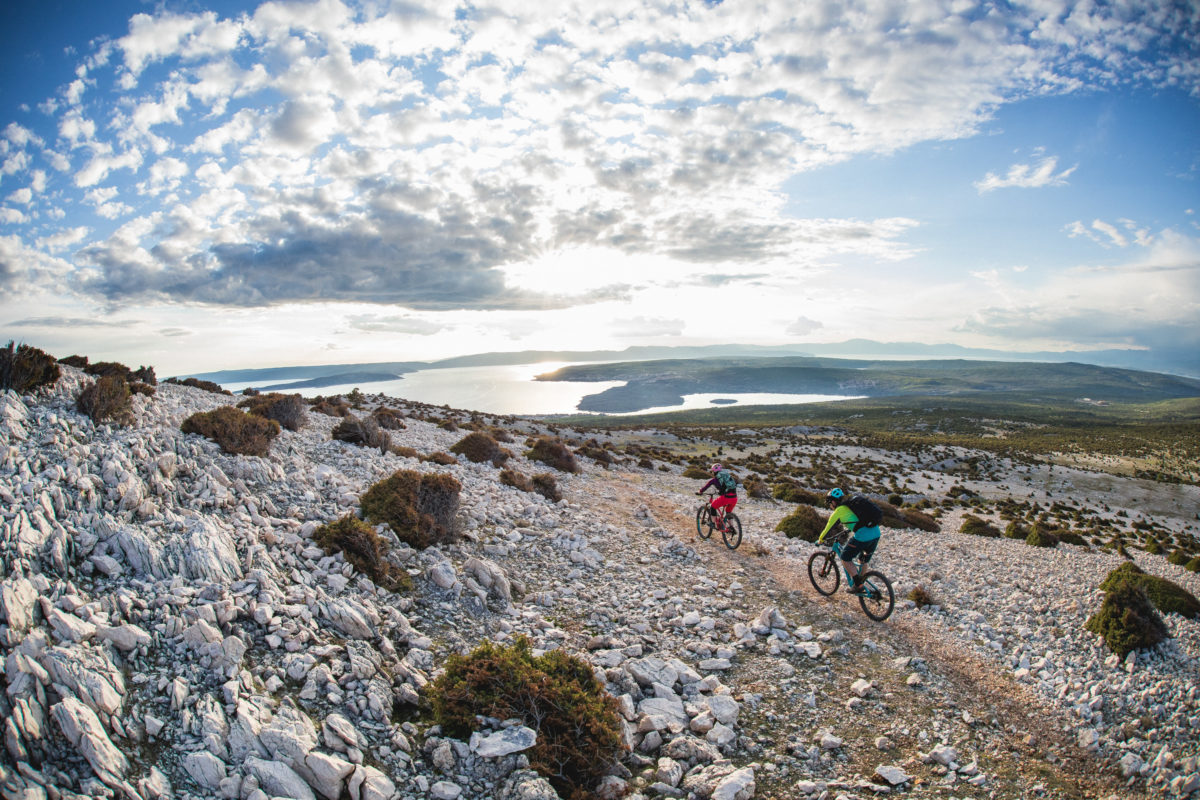 Our destination far below us is illuminated in a burst of red evening light as the sun breaks under the lingering cloud cover. We take our opportunity and make a dash for it, picking our way through the carpet of rocks before being funneled between two stone walls. We reach a split in the trail with a sign; XC left. DH right. Well it’s got to be right, right? The trail is as rocky as ever but with sweeping berms and some nicely shaped doubles, which I’ll admit got me a little too excited. I dinged my wheel off a rock and got that deflating feeling as the air in my tire made a break for freedom.

It didn’t matter too much though, as we were in the final few meters of our route. We came across a group of local lads testing one of their creations, and stopped to chat briefly. It was a refreshing finish to the riding knowing the Croatian scene is youthful but developing, and looks great for the future. 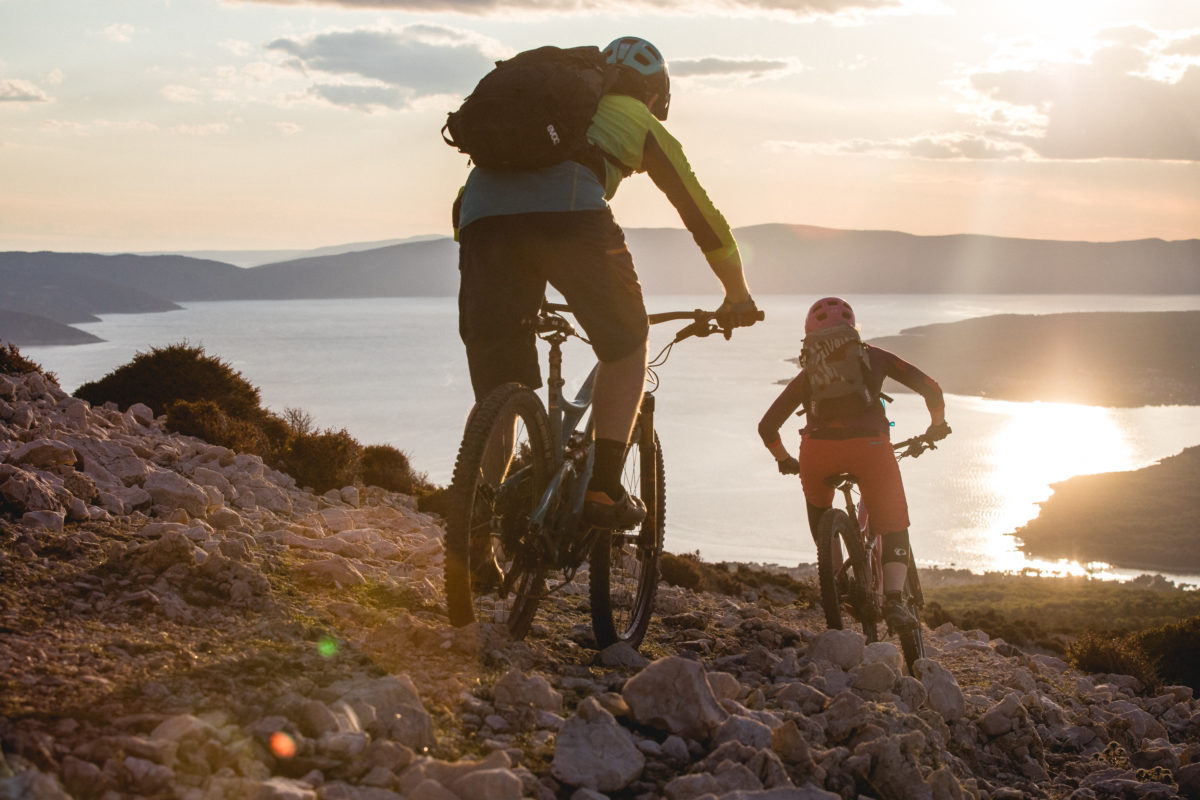 After a long day on the bikes, and it being our final night in Croatia, Danijel insisted it was only right for us to try one of the local Konoba restaurants. We left the main road and drove down a rickety farm road for twenty minutes, flanked by forest and with no signs of buildings or civilization. Eventually there is light ahead and we pull up at an old farmstead, greeted by the chatty host who quickly ushered us inside and, before we knew it, some local schnapps were lined up in front of us. Let’s just say certain members of the group enjoyed them more than others… 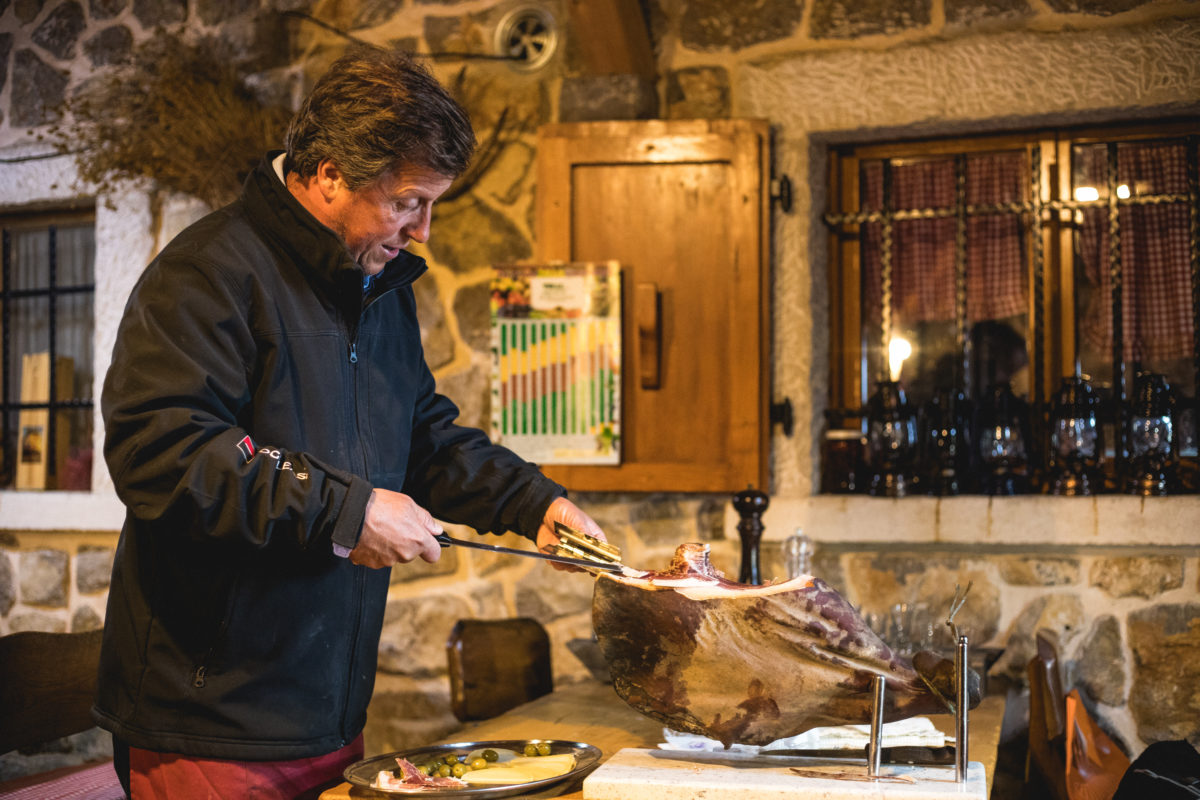 After swiftly devouring a round of ham, cheese, and olives, the owner gets the message and quickly responds with a monstrous pot of bubbling stew big enough for an army. Danijel looked happier than he had all week! We had our work cut out for us and despite the owner’s finest support and encouragement we couldn’t quite see it off. Istria had ticked all the boxes; the cuisine was rich and full of flavour, the locals’ hospitality second to none, and the trails as diverse as they come. Forget the fantasy dragons and fighting of ‘Game of Thrones;’ head north, away from the crowds and into some unspoiled corners of the country. Oh and you might want to take your bike too… 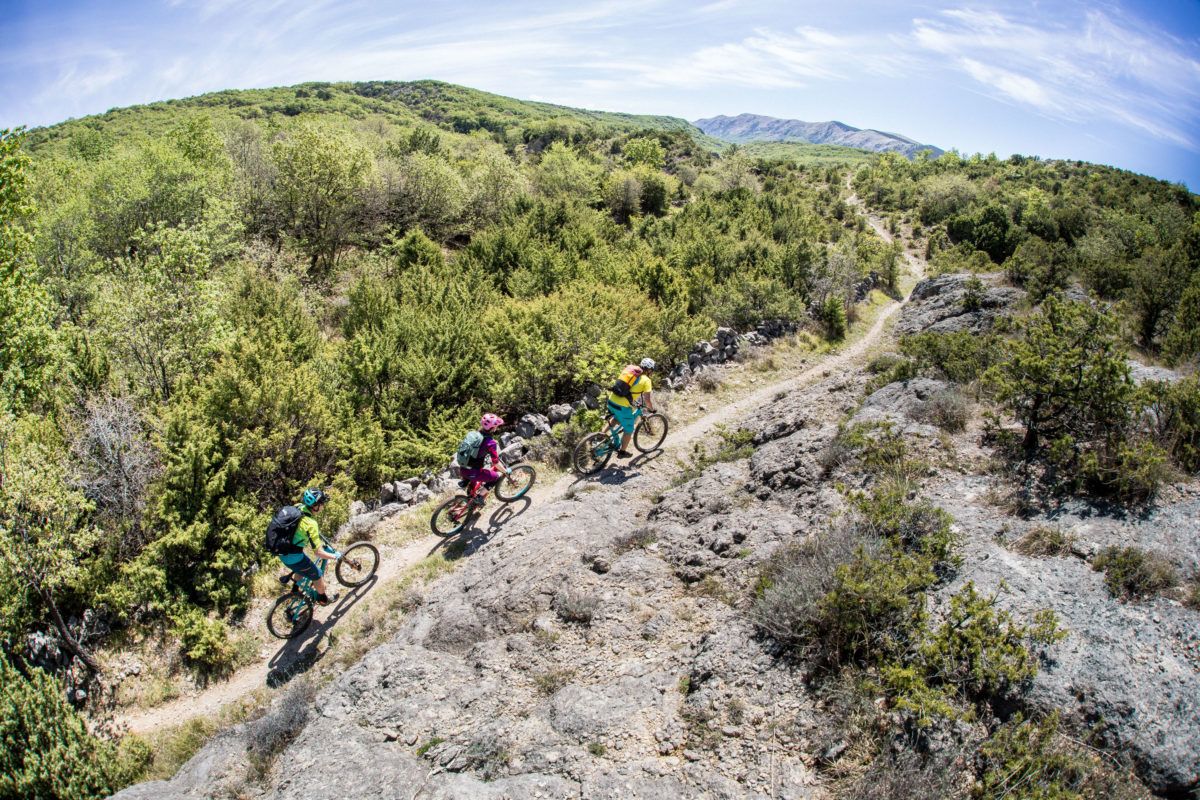 To experience the delights of singletrack and Croatian coastal living in 2018 for yourself, why not check out H+I Adventures newly crafted mountain bike tour.

H&I Adventures
At H+I Adventures we specialize in mountain biking adventures. That’s all we do. We're passionate about exploring the world by mountain bike, and our tours are a carefully crafted combination of physical challenges and cultural adventures.

Culture
The Venerated Italian Superenduro Series is Paused for Another Season
Trails
Grand Targhee Resort Offers Singletrack Nirvana--And It's Getting Better Every...
Trails
Sun Valley, Idaho: Your Destination for Endless XC Singletrack
Community
Up a Hill, Down a Beer: The 2016 TransAlp Race