When the gun went off on day one in Imst, Austria, a strange sense of relief came over me. I’d done everything I could in the previous eight months to prepare for this seven-day, 323-mile stage race through the European Alps, and now the thing was in the hands of fate and luck. Ever since my partner’s Indecent Proposal back in a whole different calendar year, I’d been logging miles on the road bike, the mountain bike, and making hollow and repetitive promises regarding stretches, crunches, and push-ups. The prescribed twelve hours a week on the bike were harder to procure than I’d imagined. Riding to work logged 2.5 hours if I resisted the call of the ferry on the way home and opted instead for ceaseless, punishing headwinds off San Francisco’s Marina Green and Crissy Field, but of course there was always something to keep me from riding to work more than three days a week—night meeting, dinner with friends, fog, House of Cards…

Day one was to be an ogre of a stage: 88 kilometers (55 miles) with 2,960 meters (9,711 feet) of climbing. And that’s hard enough, but then there’s the day after. And the day after that. And the day after that. Lather, rinse, repeat for seven straight days. The TransAlp race, now in its 19th year, brings teams of two from all over the world to tackle some of Europe’s toughest and most beautiful mountain passes. I felt a deep happiness every morning hearing the countries we were from—Austria, Latvia, Germany, Luxembourg, Nepal, India, Canada, New Zealand, Columbia, Costa Rica, and more—as we rolled out onto the cobbled streets of the old world, locals cheering and waving, like we were a big deal.

343 teams finished this year’s race: 113 male teams, 13 female, 46 mixed pairs, 125 masters, and 46 grand masters (combined age over 100 years). 36 folks finished individually, meaning that their teammates dropped out for some reason (or were “disappeared” by their partner…). With its generous helping of gravel and not insignificant number of kilometers on pavement, the pro’s weapon of choice was a hardtail, and my partner and I were astride the closest thing we could stand without actually giving up full suspension—the Specialized Epic. I’d had an Epic in 2013, and loved its speed, its climbing prowess. But it rode like a jackhammer on meth for the descents, so I sold it. But for this race, it was the right tool.

{I wanted to try the Era, the women’s version of the Epic, but couldn’t find a shop with a demo. With no context aside from this, “I want to try an Era but can’t find one,” I e-mailed Specialized. Steeped in the “Specialized is too big, too impersonal” lore, I didn’t expect much. Imagine my surprise when the rep responded that not only did they have one I could try, but he would bring it to me. When that one was too small, he brought me a larger size the next weekend. Now, when I decided I wanted one, there was no medium Era available in the entire nation, but that does not take away from the good service that was rendered here, and I thought it deserved a shout-out.

And while we’re at it, REI. I bought a Garmin. I mounted it smartly on my handlebar. My friend Anne stood on the other side of the usually shallow creek and seemed to be saying words at me. I entered said creek, hit the hole she was apparently referencing, promptly fell over, completely immersing me and my new Garmin. I’ll call her out here for failing to not laugh before asking if I was okay. Anyway, the screen was a scramble of hatch marks, crisscrossing bar codes with the tiny, forlorn edge of the word “distance” peeking through the mayhem. It was toast. On a lark, I took it to REI, and without even the hint of a white lie, I plopped the thing on the counter and said “Hi. I fell in the creek. I broke it. It’s all my fault. What say you.” Nice sales guy looked up my record, found that I wasn’t a serial returner of ten-years-used hiking boots or items from Walmart and said, “Well, how about if we just give you a new system?” For this and #OptOutside, I say “Bless You, REI.”}

It is quite interesting racing in a different country. While many of my fellow competitors spoke English, it was difficult to employ my usual (really stupid) beginning of race jokes: “Why is everyone in such a hurry?” “Are we there yet?” “I’m tired.” One in particular fell quite flat. Wallowing and surfing my way down a mud chute near the end of day one, I mustered up my best Valley Girl voice and bleated out “Oh my God, I’m getting really dirty… it’s like, so gross…” The guy next to me looked over with bleeding incredulity, his lip curled in disdain. “I’m KIDDING!” Ugh. 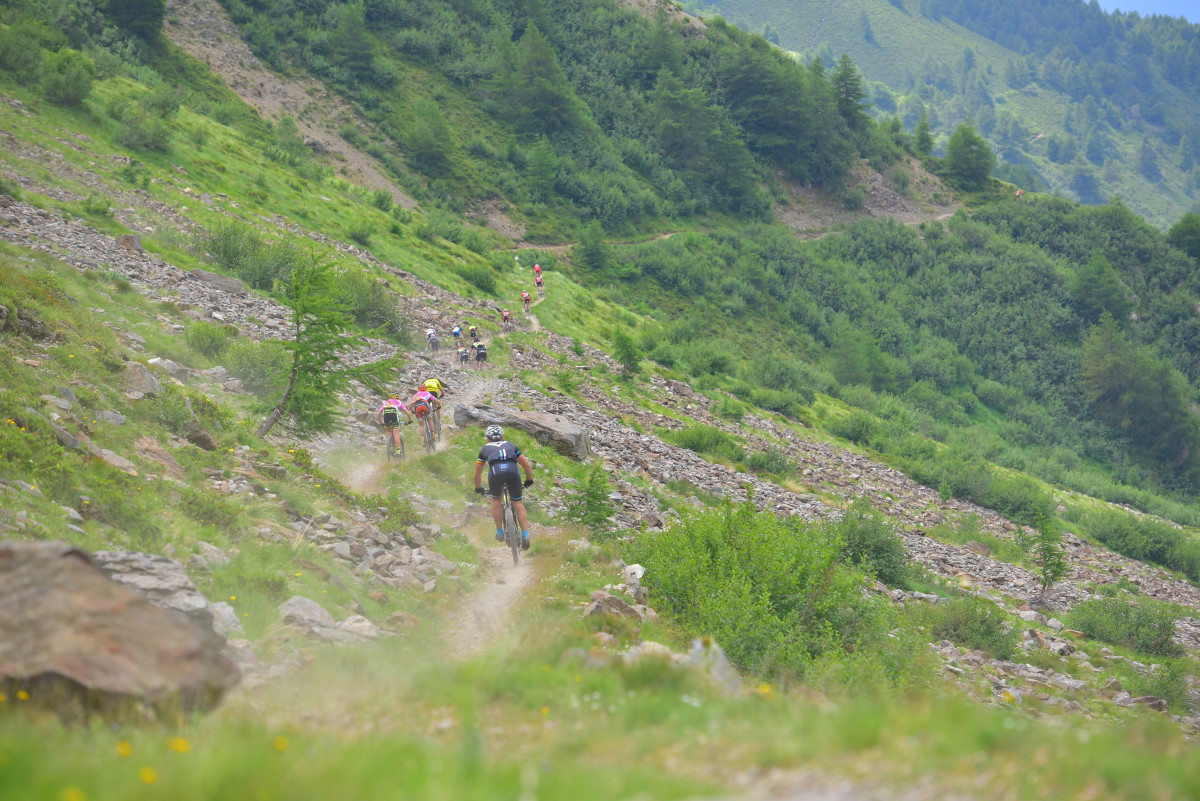 There are several different lodging options to choose from for the TransAlp. The “TransAlp Camp” offered cots in gymnasiums in the towns along the way, or a hotel package spares you the unique experience of racing your ass off then attempting to sleep amidst hundreds of snoring (mostly) men. With either option, a perfectly-executed bag service shuttles your luggage from town to town, and you can also leave a day bag in the morning that awaits you at the finish in the next town with a more than welcome pair of sandals and a change of clothes.

A “Pasta Party” in every town allowed all racers to gather in the evening, chow-down like the calorie-starved fiends we were, and to hear race results from the day, view photos, share stories. But mostly eat a lot of damned food. Two of these dinners were hosted at ski resorts at the top of gondolas with views to break your heart. The Alps are a special, jagged, rugged place, interspersed with the rough remains of Roman roads, babbling brooks, emerald meadows, and cows. Lots of funny cows.

Heading up one of the many long, sustained climbs through terrain only heretofore seen in coffee-table books, the riotous cacophony of cowbell made me actually snort with laughter. They were the beautiful tan, cream-colored kind of cow with the deep, pretty brown eyes like you find as stuffed animals or in movies from Pixar. And they didn’t give one tiny damn about the endless procession of self-flagellating humans parading by and through them—they’d saunter into your path and stop, flick a tail and smack your helmet, or drop a mountainous load for your viewing pleasure. But try to pet one on your way through and suddenly they are gymnasts, capable of lithe moves to avoid your icky, icky touch. I was sure that yelling “More Cowbell!!” would get me a laugh from my comrades, but once again, crickets. I guess they don’t do Saturday Night Live much in the Alps… 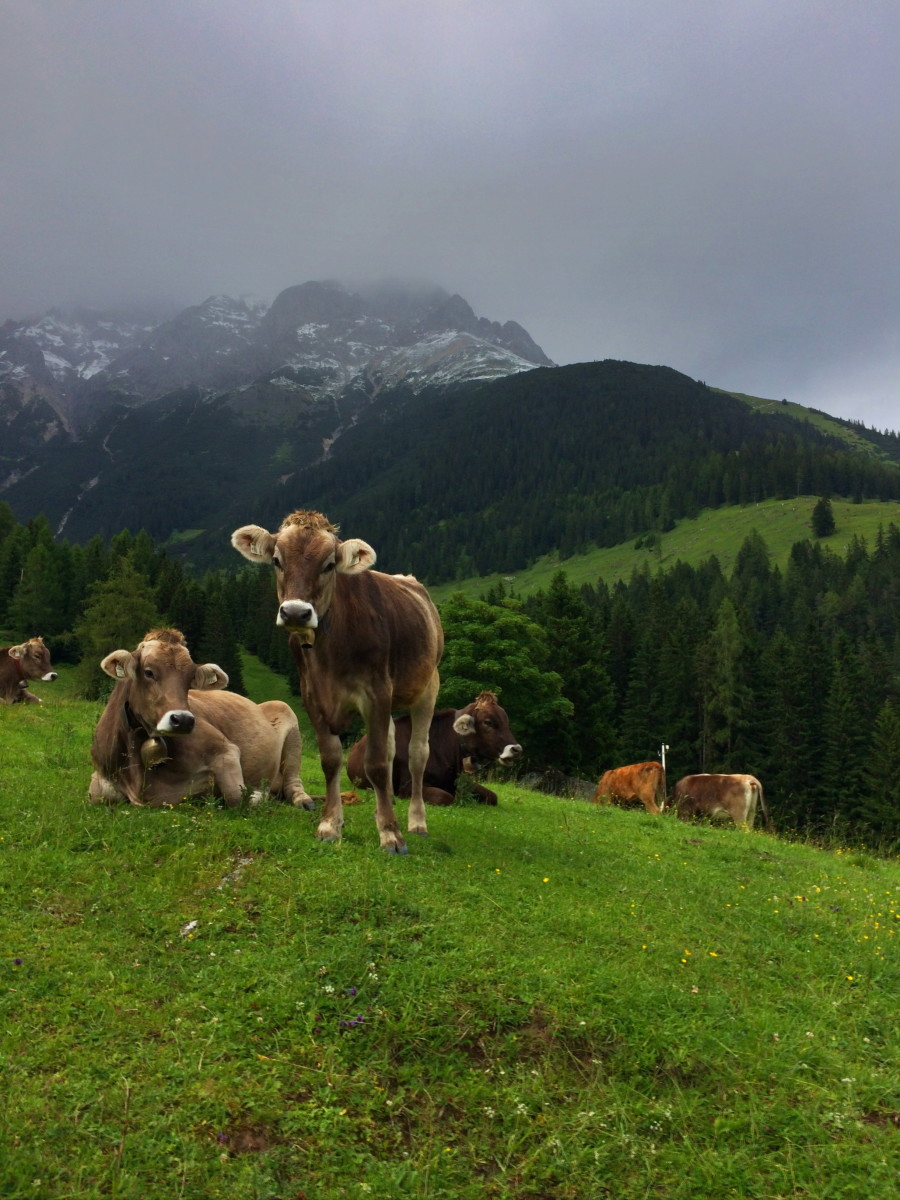 When we started this thing, I went to great pains to impress upon my partner that while the title does indeed bear the word “race,” I’d be riding to finish, to “have fun.” Fortunately, while said partner is indeed quite fast, he also really likes beer. In fact, our team motto is “Up a Hill, Down a Beer.” This, combined with that monumentally awesome European tradition of placing a restaurant at the top of most any and every stunning peak, meant that I’d have relief from his harassment regarding my speed—he’d simply sprint ahead, find a beer shed, and await my arrival with an amber-hued glow about him. On day two, crossing from Nauders, Austria into Scoul, Switzerland, he lured me from the course at the top with a frosty, glittering beverage. It was euphoric. As we sat on that hillside gazing at a crystalline lake, spires rising above and beside, we cheered and heckled fellow racers streaming by.

“Hey! C’mon up! We’re not going to win anyway—why not have a beer?”

A pair of fine English gentlemen I’d had the pleasure of befriending on the grueling, interminable climb came huffing up the trail. Ben took one look at us, engulfed in our beer glow, and deadpanned in his lovely accent “There’s more to life than fun you know…”

And it was fun, but of course there’s a price for everything fun. As noted, I wasn’t there to race, but when the results that night showed us in 47th place out of 51 mixed pairs, I choked on my spaghetti and spat out, “Screw that—no more beer stops for me.” While still slow as hell and utterly lacking in finesse, I did manage to move us up ten places by not stopping for a half-an-hour mid-race. Imagine that. (Partner continued to stop, but finishing time is based on slowest person. So there ya go.)

That we did not really see much of the beautiful towns we passed through felt at times like a missed opportunity, but these hints of regret were barely able to form before the more base instincts of hunger and fatigue ran them down like a bus. Besides, while we did largely miss these worthy destinations, we saw parts of these countries few tourists do. And amidst hundreds of other folks with the gusto to have signed on, I felt as if swept along, buoyed by the collective passion for our endeavor. This isn’t to say it didn’t hurt—my ass may never be the same—but it was a beautiful, honorable hurt that I am proud of.

Winning Men, Hermann Pernsteiner and Daniel Geismayr, completed all stages in 22:28:50; their least time in the saddle was Stage 2 at 2:28:50, the most, Stage 5 at 3:52:09.  Winning women Sarah Reiners Sarah and Cemile Trommer Cemile turned it in with 32:30:02, and the winning mixed team Sally Bigham and Ben Thomas completed all stages in 26:39:46. By comparison, yours truly & Co. bagged all stages in 47:49:55, twenty-one hours and ten minutes behind the winners. Ha!

But that’s okay—for me, finishing was enough.

Community
Swiss Sweep Women's Olympic MTB Race, with Jolanda Neff Taking...
Gear
New Ibis Exie Cross-Country MTB Frame is Made in Their...
Community
3 Takeaways from Olympics MTB and Why XC is the...
Gear
A Peek at the Specialized S-Works Stumpjumper for the Upcoming...
Subscribe
Login
Please login to comment
2 Comments
Most Voted
Newest Oldest
Inline Feedbacks
View all comments

This sounds like an absolutely epic experience all around. Nice job!

And I applaud your decision to skip the beers on the top of the climbs… I don’t think I would have had that kind of resolve!

You are freaking amazing.