A few weeks ago, I told you that I was heading out on a road trip from my home in Pennsylvania to Colorado. My goal was to ultimately meet up with some of my fellow Singletracks crew to ride and hang out in Salida. En route, my plan was to stop and ride as much as possible. I had selected some potential spots, and many of you gave me some valuable feedback. I very much enjoyed reading all your comments, and ultimately added even more trails to my list. I didn’t have nearly enough time to hit even close to all of them, but I did get to ride a few really great places, and had a blast doing it!

Though my original article and potential plan included stops in West Virginia and Kentucky, I ended up getting a slightly later start than anticipated and decided to drive on through these closer-to-home spots. Big Bear Lake and Coopers Rock are only a few hours from where I live, so it would be easy to head down there for the weekend and explore. I also arrived at Cave Run Lake in Kentucky a little too late in the day to get much of a ride in, so I decided to just keep driving and try to make some headway on my westward journey, saving the riding for the next day.

This spot was not on my original list, but early in my second day on the road I started getting antsy. I needed to ride!! So I used the Singletracks mobile app to find some nearby trails. Binder Lake had good reviews and was about 20 minutes off the highway. I decided to take the detour, and it was worth it. The trails are located at Binder Lake State Park, which, when I arrived on a Tuesday morning, was quiet and nearly deserted aside from a few fishermen. I stopped briefly at the trailhead kiosk to check out the map and take a picture for reference in case I needed it, but found that the trails were well-marked with arrows directing the rider to the various loops.

I found that the trails were mostly flowy–somewhat reminiscent of my local Allegrippis Trails, but with less climbing. There were a lot of short climbs and descents, but nothing sustained, and it was easy to get into the rhythm of the rolling singletrack. There were plenty of mildly-technical spots to keep me on my toes, though: rock gardens, rooty sections, bridges, loose descents, and log piles. I got a good two-hour ride in–enough to stretch the legs and get my heart pumping–before shoving my now-dirty bike back in the rental car and hitting the road again.

I learned a lot on this road trip, and one of those things is that there is actually great riding in the Midwest. Granted, I only rode a couple places, but I was thoroughly impressed. Swope Park rid me of all my misconceptions about the “flatland,” offering an oasis of rocky, technical, and quite challenging singletrack–in the middle of a metropolis, no less. I showed up at Swope after driving through Kansas City trying to find my way (I was probably that driver that everyone hates–changing lanes at the last minute, driving too slow while looking for the correct road, etc.), and was met with a parking lot full of bike racks and cyclists in various stages of getting ready or returning from a ride. It was evening, and the after-work crowd was clearly descending upon the trails. 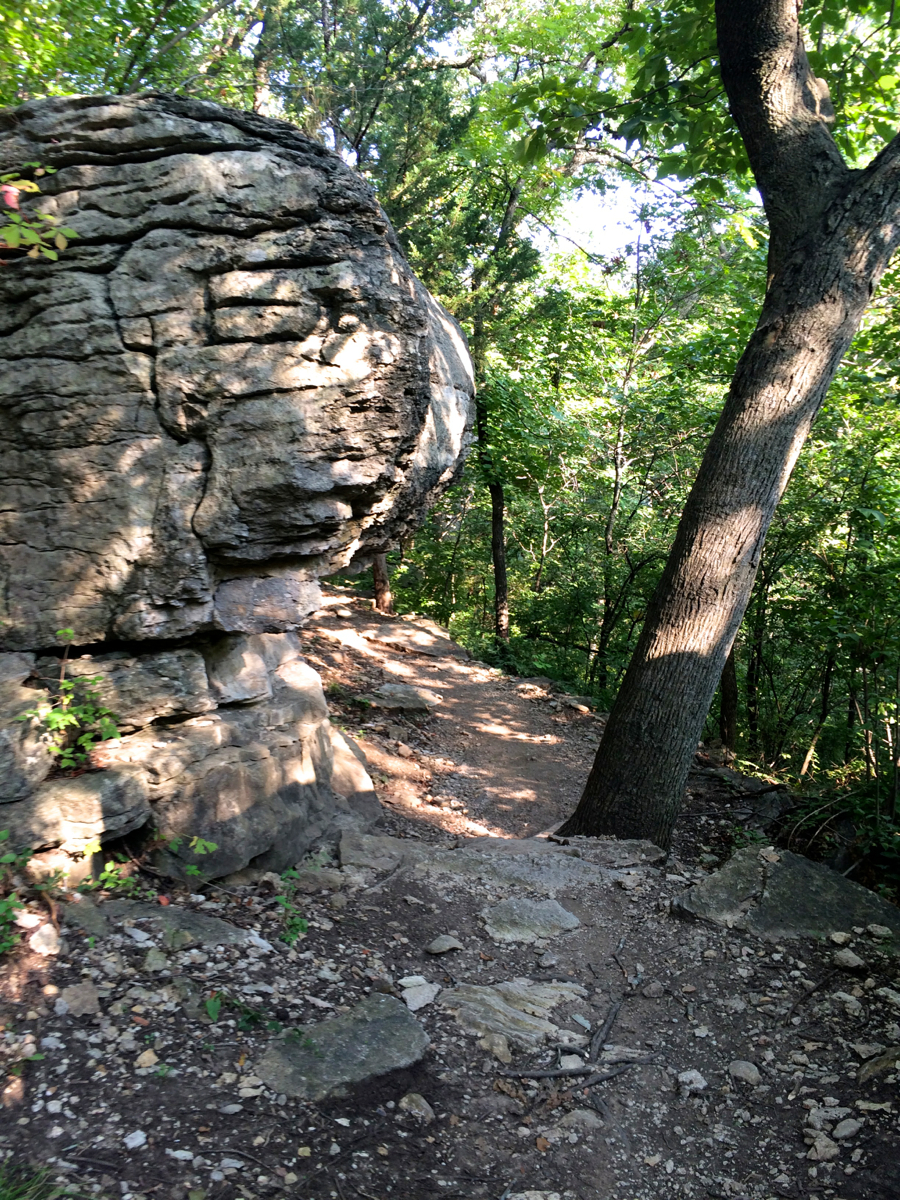 I had downloaded a PDF map on my phone, available via the trail website. There are two main loops–Racho D-Lux is the easier trail, which stays on top of the little hill that is the park, while Wudchuck Run circles the perimeter and winds through and over huge limestone outcroppings. From these two loops there are a number of connectors for a variety of ride options. I opted to head down Wudchuck Run, and was immediately greeted with chunky technical sections linked together by short spurts of flowy trail. It was awesome, and I was having a blast!

And then, my rear wheel started rubbing. I stopped to see what was going on, and realized that I had lost one of my alternator bolts somewhere along the trail! I ended up walking out of some killer singletrack. Lesson learned: always ensure that all your bolts are tight before every ride, and carry spares when you are traveling. Luckily, I was able to find a bolt that did the trick at a hardware store, and $1.59 later, I was back in business.

Of all the places on my list, I think I was most curious about Switchgrass. I was interested to see what Kansas riding would be like, and I had heard mixed reviews about the trails and area. Most people really liked it, but there were a few who thought it was overrated. I was excited to see for myself.

I had spent the night slightly west of Kansas City, so when I arrived at Switchgrass, it was nearing midday. I knew that ideally, I wanted to ride these trails early in the morning or after the sun went down because of the heat, but as I was just passing through with limited time, I just had to make the best of it. I stopped at the park office for a map, and after examining it for a while, decided to park by the bridge and start my ride with the Hells Creek Loop.

The trails are arranged in a stacked loop system and are all directional, so even if you do them all, there is supposed to be no backtracking or overlapping, which is pretty cool. There are about 22 miles of trail in all.

After passing under the bridge, I found myself on mainly-flowy singletrack that was punctuated by sections of rock, sharp turns, and short but steep climbs that kept me alert. The trail would sometimes follow a narrow ledge on one of the many bluffs above Wilson Lake, adding some excitement to the ride. 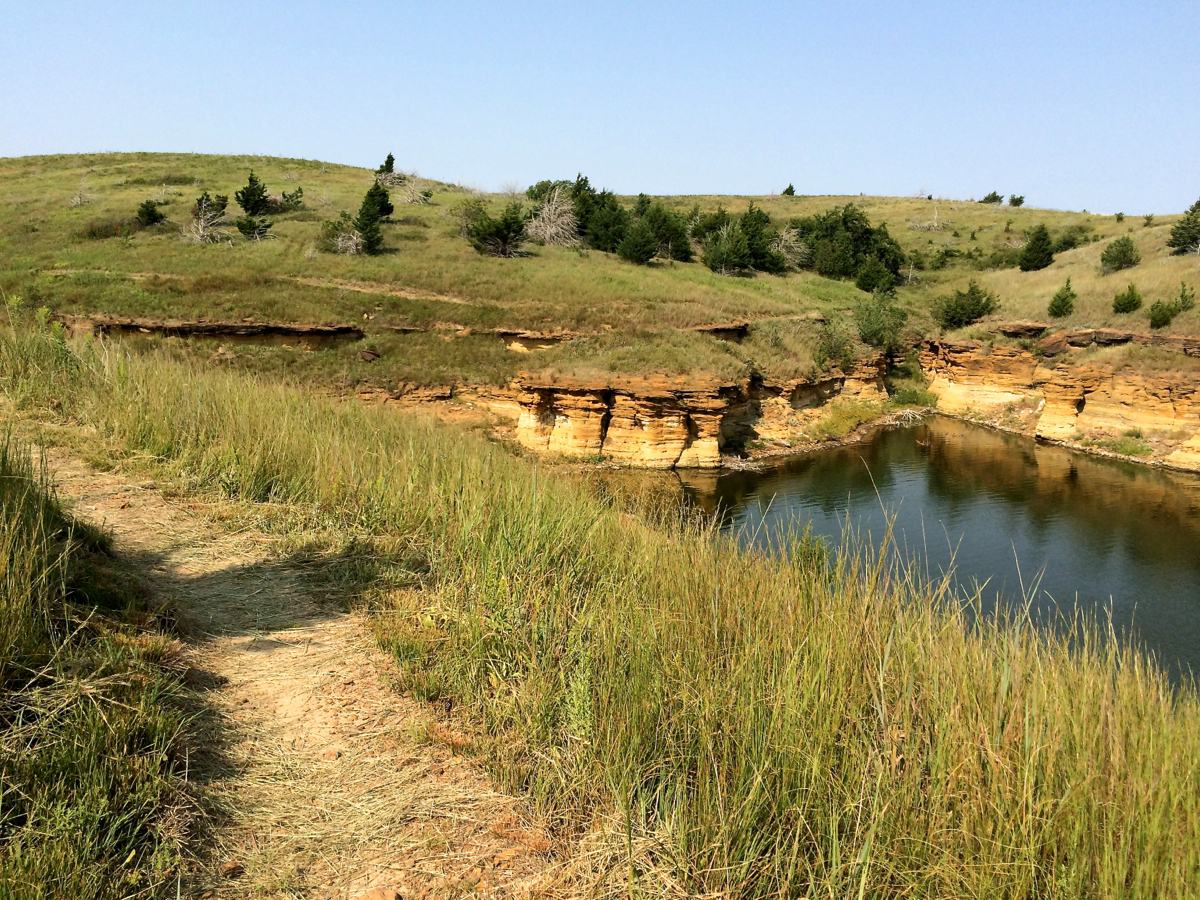 The Hells Creek Loop winds around the bluffs and lakeshore before gradually switchbacking up the the hill and back down the other side away from the lake. I thought the views and scenery were interesting, as it’s totally different from what I’m used to. The wind blew pretty steadily, which was actually quite a relief, because it was about 100 degrees and there was no shade except for under the one tree on the aptly-named Lone Tree Hill.

I wanted to do as much of the trail system as possible, but the heat was really starting to get to me and my northeasterner body, so after completing the Hells Creek Loop, I decided to bag it. I would have loved to sample the rest of the trails at Switchgrass, but if I’m ever back in the area, I’ll make sure it’s either in a shoulder season or very early or late in the day.

After Switchgrass, I was pretty antsy to finally get to Colorado and spend some time with a friend in Boulder before heading to Salida for the Singletracks meet-up. So, after my ride, I packed the bike up, hopped in the air conditioning, and drove straight on through to start the next chapter of my journey.