After spending several days riding in Oakridge, I began to realize there was no way I’d be able to hit even half of the fantastic rides available in the timeframe I had allotted myself. And generally, if I realize such a thing, I try to just shrug off whatever prior commitments I have and hang around until I can say that I’ve ridden the bulk of the trails.

But unfortunately, I couldn’t do that this time, as the most important part of our trip was scheduled for the upcoming week. (Stay tuned…) So, with one day of riding left, I tried to put together an epic, but somewhat off-the-grid, shuttle run.

Most of the big-name, well-known rides are located on the Alpine Trail side of the valley, and while there were definitely trail options and variations off the Alpine Trail that I hadn’t ridden yet, I decided I wanted to try a big shuttle on the southern side of the river. After doing a good bit of reading and a lot of staring at my map, I settled on the Hardesty Mountain shuttle.

I was successfully able to cajole my lovely wife into driving me up the mountain, and waiting to pick me up at the bottom of my route as well. She’s such a sport 🙂

While we were able to make it most of the way up the mountain in our vehicle, the last mile or two was a pretty sketchy, severely washed-out road. Still, 2 miles of climbing is way better than 10, so I hopped on the Diamondback Sortie and started pedaling.

Based on my the map, if you don’t have a shuttle, it looks like looping the Hardesty Mountain trail and using the Eula Ridge Trail for the climb would be quite feasible… but I can’t comment on the difficulty of the climb. 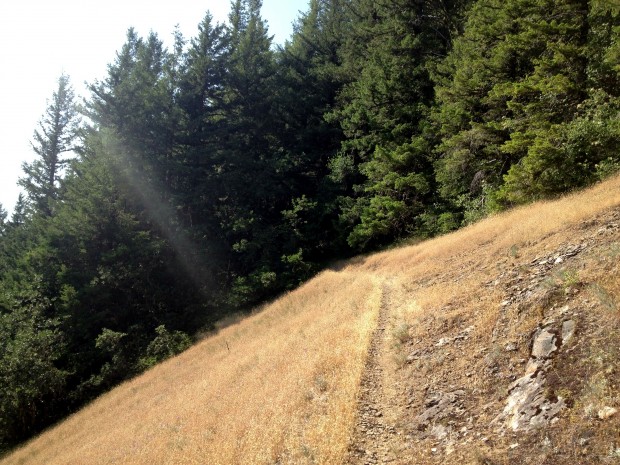 After a bit of singletrack climbing and the aforementioned navigational challenges, I reached the top of the mountain. While the trees have definitely grown up, it looks like there may have been a lookout tower/fire tower at one time:

Finally, it was time to descend!

The descent down Hardesty was an absolute rush! The singletrack was much more reminiscent of Larison Rock than it was of the Alpine Trail: narrow, loamy, fast, quite exposed in spots, and steep… all while still being very flowy! While not quite as steep as Larison Rock, the singletrack still plummeted down the mountain side in a fury of smoking brakes, high-speed turns, and slapping chainlinks!

Once I had almost returned to the level of the highway, I took a right on the South Willamette trail to catch my ride out.

When I planned my route, I had tacked on the South Willamette Trail as a bonus, to get in as much singletrack fun as I could on my last day of riding in Oakridge. Running roughly parallel to the highway across the base of the mountains, I could see on my topo map that it climbed and dipped along to my intended rendezvous point.

What I couldn’t see on a topo map, however, was how overgrown the trail was. At first, it wasn’t too bad… the singletrack was mostly passable.

But as I pedaled deeper and deeper into this 5-mile stretch of trail, the singletrack became more rutted, and much more overgrown. 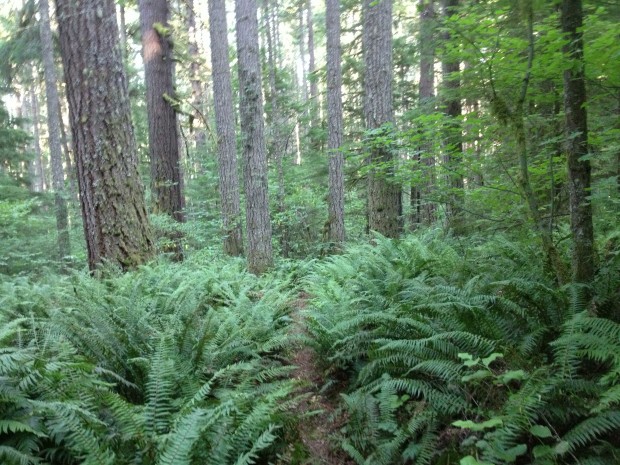 I began slapping through the tall Oregon ferns as they grew up around, and over, the trail. I also noticed signs of heavy horse use, including some horrible ruts in the lower, muddy sections. From what I saw, it’s pretty clear that the only users that frequent this lower trail are of the hoofed sort–not the wheeled sort.

Think the photo above is bad? Think again. Can you spot the trail in this photo? It’s there, trust me: 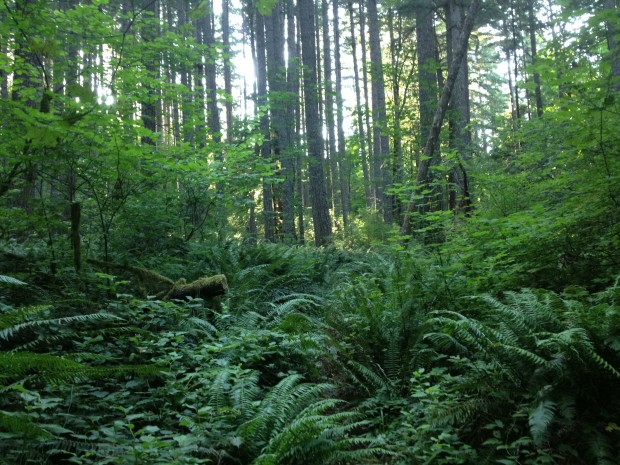 At points such as the one above I was reduced to walking, feeling my way through the undergrowth on the barely-visible pathway. I considered turning around, but at this point I figured that I was only 1-1.5 miles from my rendezvous spot, so I just sucked it up and muscled on.

Finally, I made it through the jungle, and my ride and lovely wife were waiting for me on the other side!

Having ridden such well-maintained, fantastic trails early in the week, I was really surprised to have such a horrible experience on the South Willamette Trail. However, with as much lush undergrowth as is present in these wet Oregon forests, I’m sure that little-used trails are quickly swallowed in vegetation.

My advice: stick to the more well-known routes in Oakridge. While I’m an explorer and I love to check out the more obscure trails, there are more than enough well-known, well-ridden routes in Oakridge to fill a full week of mountain bike bliss! Stick to those routes, and you’ll never want to leave this singletrack nirvana.

While we had to leave Oakridge, my travels weren’t over yet! Stay tuned for more tales from the road.