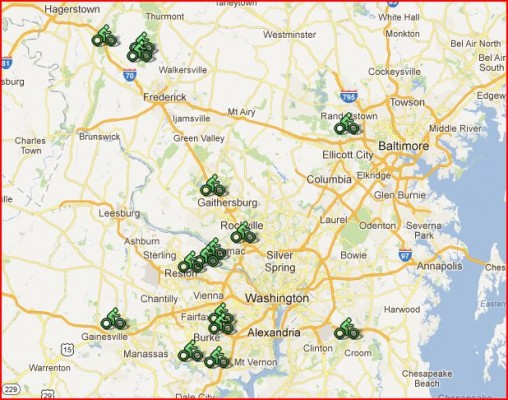 In my last article, I described the Maryland half of DC’s Dirty Dozen, 12 great trails close to the Capitol Beltway.  This time we’re crossing the Potomac to the south and east to find six trails in the Commonwealth of Virgina.  These are not the great, remote rides of Virginia’s Appalachian Mountains, but rather somewhat more modest, yet still quite worthy and far more accessible routes, within easy range of Capitol Dwellers and Beltway Bandits.

For two years, my residence sat in a suburban zone almost equidistant between the communities of Fairfax, Burke, and Springfield.  What that meant was that I was almost equidistant from three great riding venues–Wacotink, Fountainhead, and Laurel Hill–each with their own strength and appeal.

Okay, so there is actually no place called Wakotink.  But Wakefield Park and Lake Accotink Park are so close together and easily connected by a short piece of the Cross County Trail, that I almost always rode them together to add both miles and variety to my ride.

The main entrance to Wakefield is but one stoplight outside the beltway, providing maximum accessibility, but that also makes it crowded, especially since the park hosts many non-bike related events.  Wakefield Park has a nice variety of trails of its own accord ranging from very narrow, twisty multi-purpose trails in dense foliage, to wide open, purpose-built bike trails, complete with huge berms for pulling maximum Gs.

None of the trails in Accotink, however, show any signs of having been designed for multi-use.  Don’t let that scare you away, though, as most of them can be combined to form very entertaining loops.  There are a few steep entries/exits from the various drainages, and this can be a good place to hone your logpile crossing skills.

Fountainhead is the number one destination for Northern Virginia’s more advanced riders.   As of my departure, there were about eight miles of trail which felt like a lot more.  The place is rooty in the extreme and it was obvious why its devotees were so quick to hop on the 29er bandwagon.  Like other trails in the area, there is very little vertical relief, but the trail constantly makes quick drops into and out of the steep drainages, making for a draining (pun intended) ride.

Fountainhead is one of the very few bike-only trails available anywhere and the local bike club does a fantastic job maintaining the trail.  The club can be quick to close the trail when wet, but that only ensures it will remain in excellent condition for your next ride; it’s well worth the wait.  The trails have undergone some rerouting since I left and I understand flow and fun have been improved as well.

This trail network opened to the public during my DC tenure, and it was a very welcome addition to the Beltway riding menu.  The area rests on property that used to be part of the Lorton Correctional Facility.  It’s interesting parking in the shadow of barbed wire and guard towers before starting your “getting away from it all” moment.  Most of the trails are named after the prisoner’s work venues (e.g. Workhouse Loop, Apple Orchard, Dairy Barn, Slaughterhouse loop), so that adds to the sense of history, albeit somewhat dark history.  .

Some bemoan the lack of challenge, and most of the loops are indeed suitable for beginners.   However, the Giles Run trail features excellent flowing and narrow singletrack through gorgeous woods and it has a few spots that will keep you on your toes, including a nice switchback and a sizeable log crossing.   Most of the other loops are wide and groomed with crushed gravel, but that doesn’t mean they’re not worth a spin.  The Slaughterhouse loop in particular has some tight switchbacks, sizeable step-ups and a small skills park at its base.  The Power Station Loop invites high speed flow and even has a couple tabletops for those wishing to catch some air.

But the best thing about Laurel Hill, and what made it particularly welcome, was the fact that those crushed gravel trails shed moisture so much better than any other venue in the area.  When the area gets into a wet weather cycle, where the next rain comes before the last one has dried out, and all the other trails are closed (or should be), one can usually hit Laurel Hill without damaging trail or bike.

There were plenty of rides beyond my little triangle, and I’ll finish with three that round out the local geography nicely.

Like the Cabin John Trail on the Maryland side, this one isn’t on the list so much for the quality of the singletrack as it is for its proximity to the beltway—plus its potential to connect to a much longer ride.

There aren’t many National Parks where you can put knobbies on dirt, but Great Falls National Park on the West bank of the Potomac is one of them.  Okay, so it’s mostly old carriage roads rather than singletrack, but there’s a great hill and some fantastic views of the rapids below.  After crossing the park from North to South, you can hit some rugged singletrack that will connect you with the Difficult Run trail.

The Difficult Run Trail is so named because it follows the Difficult Run Stream Valley, not because the trail is difficult.  There’s no elevation change and no major technical obstacles, save for some rather nasty root gardens.  The difficulty here is the low lying wetlands retain water in the worst way.  The frequent bogs have led to a great deal of trail braiding and sometimes it’s tough to even know where to follow the trail.  Don’t go here if it’s rained recently as it will become an unpleasant mud fest.  Do go here if  you want to hit some fairly easy trail in a pretty area or if you are looking for a long ride, as Difficult Run makes up the first part of the 40+ mile, mostly dirt, Cross County Trail, which traverses the whole of Fairfax County, eventually terminating at the Laurel Hill area described above.

One of the many other parks the Cross County Trail passes through is Lake Fairfax Park, which serves as the riding center of gravity for Northwest Fairfax county residents.   Also listed in the Singletracks database under the name Colvin Run, the park incorporates part of Colvin Run but also provides a nice network of deep, dark, woodsy trails.  This is another boggy one in wet times, so wait for it to dry out, and it can get crowded, especially with newbs who aren’t always up to some of the steeper hills, so be patient and enjoy the woods.  This is an easy detour off the Cross County Trail and after coming out the other end, you can grab the paved W&OD trail back to the CCT proper to continue your journey. 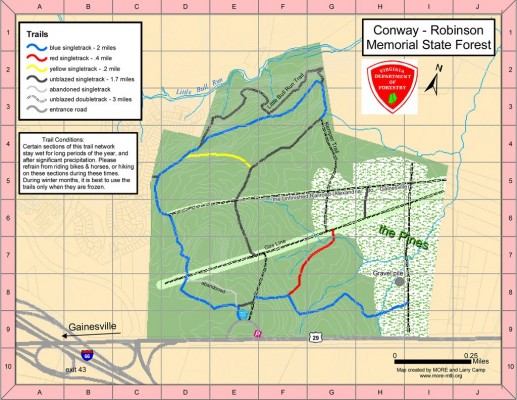 You’ll like this one if you’re a history buff as it sits adjacent to the Manassas battlefield.  Having toured the gently rolling meadows of the battlefield, I figured the trails here would be much the same.  To my surprise, there were some good bits in these woods.  Most of the small trail system is quite beginner-friendly, but if you hit the Little Bull Run trail in the northeast corner of the area, you’ll find some tight switchbacks and entertaining rock moves.

If you find you’ve got to go to DC, either permanently or just for a visit, fear not as there are plenty of worthwhile riding opportunities in the immediate area.  If you’re willing to venture a bit further out, you’ll find plenty of epic riding as well in the Appalachians as they run through Virginia, West Virginia, Maryland, and Pennsylvania.  Check out the Singletracks database for more great rides in these areas.

Just to add a little to the Laurel Hill portion: if you come ride the trail in the summer, cover yourself head to toe in high deet bug spray. The ticks are unbearable.

Fountainhead is a blast! My go-to trail for after work rides during the summer.

I wish you had traveled 40 minutes down the road and covered the Fredericksburg area trails! IMHO we take the cake for the best trails in Northern VA!

Thanks for the add on Laurel Hill–indeed, that is a tick-breeding epicenter!

On those occasions where I had time for a longer drive to get to a ride, I usually headed further into the hills for the likes of the really big rides like Elizabeth Furnace or Reddish Knob, so F-burg was not really on my radar, although it did seem like there was a pretty active MTB culture down there. I did make it down to Lodi Farm once, which was as as good a ride as any in the article. Sounds like I should have hit some others as well!

Reddish Knob/Wolf Ridge is at the top of my list for the most fun ride I’ve ever been on! I’m dying for the weather to allow some riding/camping out that way.

I’ve done only a couple of those trails, but since the MD/DC/VA area is so close and “accessible” (when it isn’t rush hour, it isn’t too bad), I have no excuse not to make a trip out to those places.

MORE does an awesome job of maintaining Fountainhead and a host of other trails in the area. The put on the MoCo Epic rides in October, which help to fund their work. If I had more time available in my daily life, I’d join their group and lend a hand. Until then, I should probably donate a few bucks here and there to help support them. If I wasn’t already booked on the day of the Epic, I’d volunteer my services as a photographer.

And yes, I do need to try the trails out in Fredericksburg as well. The ones JT has posted in his Strava profile look pretty good.