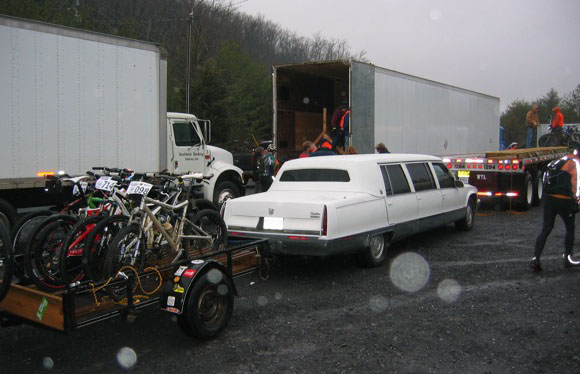 I arrived with plenty of time to spare on Saturday and met up with dgaddis and also some of the Faster Mustache guys before the race. The rain downgraded into mist by the time we got on the bus and during the 45 minute ride to the start we actually got a couple glimpses of sunshine. With temperatures in the upper 30s/lower 40s, perhaps it wouldn’t be such a bad day after all. My biggest concern was the river crossing at the 2 mile mark – would it be a foot deep or would I need to break out my trash bag hip waders? 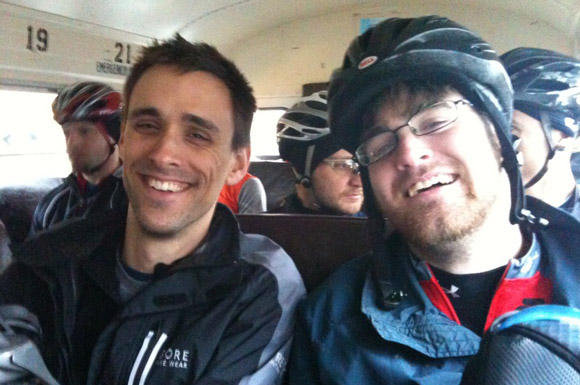 The forest road started out muddy with huge puddles that became unavoidable early on. Reaching the stream crossing, I saw dozens of riders on both sides in various stages of foot undress while a few hardy souls were riding right through the current. Things didn’t look too deep and I figured the puddles would get me just as wet as the stream so I rode right through. The water wasn’t nearly as cold as I thought it would be and it felt great to pass so many riders at once.

I managed to ride the entire first half of the course without stopping once which was a huge improvement over my first time trial. Clearly my 29 Trail training regimen left me with stronger legs! On the climbs I passed several riders, though on the downhills those same riders often returned the favor and passed me back. On the final whoop-te-do descent to Highway 136, the guy behind me executed a textbook 4-cross inside corner slide pass. The trail leveled out at this point and I encouraged the guy to take the lead – he had, after all, earned his position – to which he replied “I have no chain!” Apparently his chain snapped a couple miles back and he was coasting all the way down. Even more impressive!

At the sag stop I sat down and ate a Snickers bar and half a banana. After about 5 minutes I was starting to feel cold so I hopped back on the bike for the ascent up Johns Mountain. For some reason the climb seemed much longer Saturday than it had the month before. At several points I thought I had reached the top only to be disappointed with more climbing. Eventually the trail pointed down for good and I was stoked for the stream crossings at the bottom to wash the outer layers mud off my bike.

Climbing up from Johns Creek, I hit the second and final sag at the top of Pocket Road. It seemed even colder at this stop so I quickly ate another Snickers bar and a whole banana, ready to get this thing finished. My time was looking pretty good so far but I still had 8 miles and the most technically difficult part of the course to go. 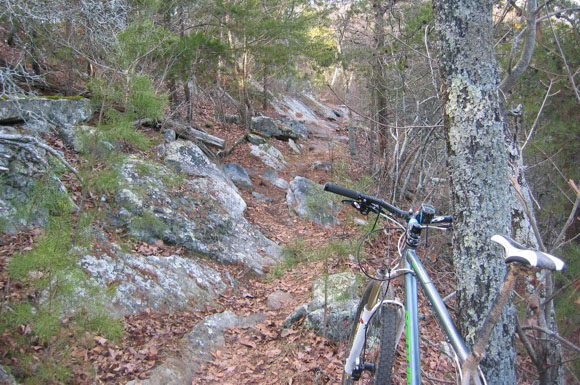 Riding this section of the Pinhoti Trail for the first time last month, I told myself it really wasn’t as bad as I had heard. Sure it was rocky but most of it was rideable and the really bad parts seemed mostly short-lived. Somehow this time, the rocks got worse. Perhaps it was all the rain that exposed new rock knuckles poking out of the ground; maybe it was all the grunting and complaining of the riders around me (I was pretty much by myself at this point last time). Whatever it was, the trail was slowly grinding away all my strength. I wasn’t cramping yet but the miles seemed to tick by in slow motion. Where was that damn tower at the end?!

I passed a few riders on a hike-a-bike up “the wall” and stuck with about half a dozen guys for the next couple miles. I imagined I saw the tower once on a nearby hilltop but it turned out to be a mirage. Apparently I wasn’t the only one seeing things – the riders around me were mumbling about the same thing. By the time I finally decided to stop looking for the tower, there it was – salvation!

I zoomed down the road to the finish, ready to get out of my muddy clothes and soggy socks. I grabbed a bowl of chili and a beer and tucked in beside the campfire for my post-race recovery. 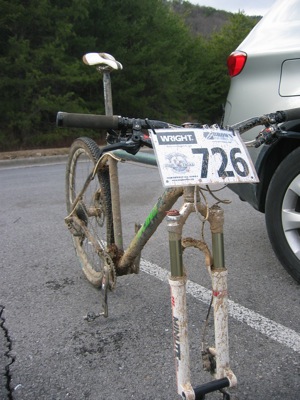 My official time was 4:37:26, more than 39 minutes faster than my first run in January. I’m not sure if that’s so much an endorsement of the 29 Trail training plan as it is better race strategy but either way, I’ll take it! My goal was to finish the second time trial in 4:30 (which was the average for the first race) and by that measure, I was just 3 minutes off my goal (apparently the mud slowed everyone down by 4 minutes over the average from TT #1).

Heading into Saturday’s race I was planning on skipping the third and final time trial in March but apparently there’s a sweet belt buckle on the line for anyone who completes all three 34-mile events (the 3×34 club). That’s all the motivation I need to keep riding…

Gear
Our Most Popular MTB Product Reviews of the Year
Gear
The Marin El Roy Hardtail is Very Slack, But it's...
Community
Kate Leeming on Exploring the Planet by Mountain Bike
Gear
These Bikes are Lightweight, Affordable, and Made for HS Mountain...
Subscribe
Login
Please login to comment
9 Comments
Most Voted
Newest Oldest
Inline Feedbacks
View all comments

I forgot to share some final stats from the past 29 days of riding:

Great job man, 39 minutes is HUGE! And I agree, the rocks did seem worse this time…I’m not sure why either. I felt like I did a much better job of riding them, but there seemed to be a lot more for sure.

I had a good ride on the 17. No cramps this time! Had to stop twice to clean out a contact because mud somehow managed to sneak by my glasses. Those were the only stops I made, and I was able to finish in 2:39 – that’s 19 minutes off last month and 1 minute faster than my previous best.

That’s a great time, congrats on the finish!

Somebody stole 2 miles of trail?

@rmoon – must the mountains interfering with GPS signals. 🙂

My GPS read 15 miles at the first sag both times even though the second half measured 17 (others I spoke with reported similar results). Even reading the official Pinhoti trail descriptions, it *appears* the mileage from section GA10 plus GA11 is a little less than 16 miles (though I’m not sure how closely the GA10 trailhead matches up with the actual race start).

The limo is cool!

Trek7k – you been over your bike yet? I was messing around in the garage last night, and, I’m sad to report that my bottom bracket is dead. It survived Fools Gold, but the Snake ate it. 🙁

[…] will recall I rode the first time trial at the start of my 29 Trails in 29 Days challenge and the second race marked the finale of my journey in early February. A glutton for punishment, I drove to the […]