What do you do when you have to work on your day off? Make an adventure out of it, of course! Suddenly, it hardly feels like work. This past year working with the Forest Service, I worked a full-time schedule of four 10-hour days per week. A couple times I had to work on a Monday, smack dab in the middle of my 3-day weekend. Both times I just made a bikepacking trip out of this. The first time in May was only my second bikepacking trip ever. My second bike-to-work trip was later in the year after logging a few more trips and experiences. Each trip was different, but got me to the same place.

I left from my house in Victor, Idaho on a Sunday afternoon. I took the bike path to Driggs, then connected with several gravel roads to Tetonia. That alone was almost 20 miles. From Tetonia, I connected to the Ashton-Tetonia Rail Trail. The trail is mostly flat, passing by rolling fields with the vast Teton Mountain Range behind you. If you keep your eye out, you may even catch a glimpse of some wildlife.

Not long after passing through Tetonia, I met up with some folks out for a Sunday afternoon ride. They took an interest in my loaded bike and wondered where I was heading. Some time later I actually chatted with a guy from Idaho State Parks, who manage and maintain the trail. It was nice to meet another staff member of the State Parks, which the Forest Service works closely with at the Mesa Falls location.

Since a landowner hasn’t permitted the rail trail to pass through his property, an official reroute took me down the edge of a field. This section comes after a quick jaunt on the highway and an immediate right turn onto a gravel road for a mile.
A friend in Ashton called and asked if I wanted to meet up with him – what do you know? I’m heading there right now… on my bike. He was fishing not far where I was planning to camp that night, so it worked out great. Total length for day one was 56 miles. The sunset was pretty awesome too! 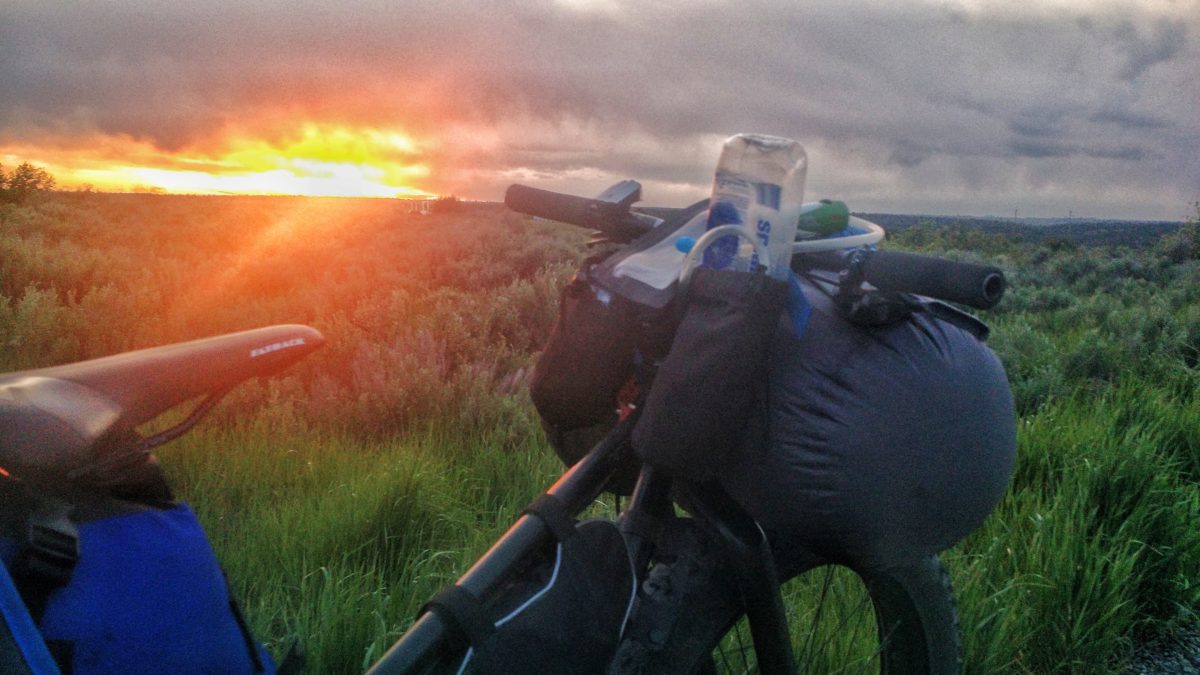 With my destination ending in Ashton, I would need a place to sleep, as public land was too far away for this trip. I made arrangements with a coworker to hang my hammock in a wooded area of their lot a few miles outside of town.

The next morning was only a 5-mile commute on my bike to the Ranger Station. From there, I rode in the Forest Service truck 30 miles to Upper Mesa Falls. After work, I took the long way back to camp with still enough time to relax and cook some dinner.

The following morning I made some coffee and breakfast and packed my bike. I stopped at 511 Main, a pizza and sandwich shop, for some lunch, and asked them where I could find energy gels and bars. The small grocery store in town had none of what I needed. The owners of 511 Main also own the local gym. They were happy to open it up for me – take note future Tour Dividers, as the route passes right by Ashton. 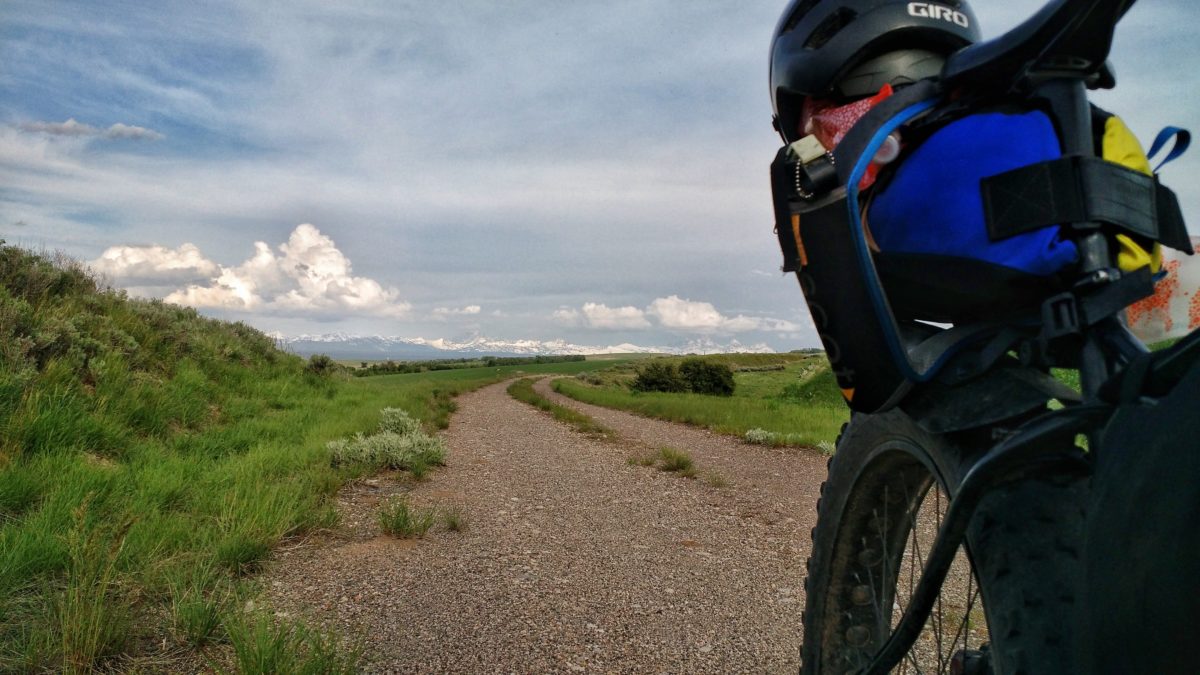 The ride back to Victor went smooth, despite being at a slight incline. About halfway to Victor, I did have to stop to filter some water from a stream. This is yet another reminder that no matter where you’re traveling, pack a water filter… even for big day rides.

I arrived back in Victor around 7:30 that night–plenty of time for a good night’s rest for work the next day. The total trip mileage was about 115 miles.

I loaded the bike with bags packed into my truck and drove to Ashton on a Sunday afternoon. Before leaving Ashton, I rode to the grocery store for a few supplies, where I saw a thru-hiker. I asked him if he was the guy walking along Highway 32 the previous evening and he was. I told him about the awesome rail trail and felt bad he didn’t know about it. He was way off route from the Continental Divide Trail, but he had quite a few misfortunes along his trek. One of those was being pushed off the trail due to wildfires.

After the chat, I headed north out of Ashton three miles on the highway and took a gravel road east. The road parallels the North Fork of the Snake River. With one roller after another, the scenery is incredible, especially at sunset.

The road kicks you out onto the Mesa Falls Byway a half-mile from another rail trail starting at Warm River Campground. The initial plan was to take this trail north to Warm River Springs or even further if I could. However, because I got off to such a late start, it was already dark by this time. I opted to cut my ride short and camp in a more accessible area not far from the road. This meant I only had a four-mile ride to Upper Mesa Falls in the morning. That as I laid in my hammock, I admired the clear night sky and listened to a juvenile great horned owl call for hours.

The next morning I loaded up my bike, boiled some water for breakfast and coffee, and hit the road. A Forest Service truck with a couple people I knew passed me and I chatted with them when they came to a stop. It was nice being at the falls so early, as I had it to myself!

After the workday, I headed back out on my bike, but not before answering a few more questions from visitors. I guess out of uniform I still looked like I knew how to answer their questions… “Yes, the falls are down there. Follow the paved pathways and the sound of crashing water.”

I took the singletrack along the canyon rim, which is always a fun section. From the byway, I joined up with an abandoned railroad bed, which was quite the adventure. From there, I connected to some gravel roads and took them the rest of the way into Ashton. Total trip mileage was 40 miles.

It May Involve Some Creativity

Bikepacking to work will look a little different for each person. In my case, I had two different destinations and was still restricted by time and daylight. A bikepacking trip for you may look like driving to the office, working, then heading on your bike from work up into the woods, then coming back the next morning. Or it could be leaving from your front door on bike and camping near where you work, if you’re fortunate enough.
An alternative is a microadventure overnighter that might involve leaving from your house after work and arriving back in time to drive to the office the following morning. But that is a whole other topic–watch for an article on soon!

Your Turn: Have you mixed work with play? We’d love to hear about your bikepacking trips to work in the comments below.

Great article, Aaron–lemons to lemonade for sure.

I have mixed work with bike play in two ways. First is my daily commute as I have many dirt options between the home and office.

Second is business travel. Whenever I can, I drive, and throw my bike in the car. I can usually stop and get a ride in on my way to and from my destination. I also have the opportunity to get in after work rides at my work destination. With lights, I can even do that in winter.

Thanks John! That’s great! I also drive when I travel and bring my bike with. Of course, commuting to/from work every day by bike is a great thing too!