Tim Woody knows his mountain bike trails. The Anchorage resident was flipping through the latest issue of Outside magazine when he happened upon an ad for the state of Tennessee: “Knees scraped. Nose sunburned. Heel blistered. Burdens released.” The ad shows an interesting handlebar view of a beautiful mountain trail – the only problem is, the photo was actually taken in Alaska 10 years ago. 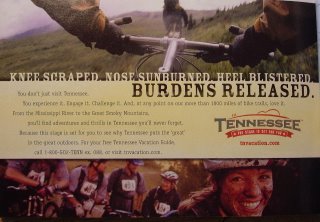 Tim was able to dig up a National Geographic spread from 1997 with the original photo from Lake Clark National Park in Alaska. Looking at the photo it definitely seems like a bit of a stretch – not too many open tree-less mountain vistas in Tennessee. The fact that it’s from 1997 is great too, the bike definitely looks a little dated.

Tennessee’s official response is that they weren’t able to get any good photos in time for the ad campaign deadline so they opted for stock photography instead (I’ve mentioned the risks associated with stock photos in a post on a different blog). The funny thing is they have gotten more press over the mix-up than they would have if they stuck to a legit photo (though the credibility of the claim that Tennessee has good mountain biking is now a bit dubious).

Tim’s complaint was also picked up by newpapers around the country, including USA Today.