Nestled within the Port Hills, Christchurch Adventure Park, though still young, has an already tumultuous history. Given the nature of New Zealand geology — a hotbed of volcanic activity, with the south island located right along a major fault line — it comes as no surprise that Christchurch has seen more than it’s fair share of earthquakes.

February of 2011 saw the city suffer at the hands of a catastrophic quake that killed 185 people, flattened at least half of the city centre including many historic buildings, and destroyed thousands of homes leaving many homeless and without livelihood. Only now is the city starting to recover, and even today it only takes a short walk around the city to see evidence of the quakes in plain sight.

Christchurch people are resilient however, and the city has a strong mountain biking culture, so in 2011 the idea of a bike park was pitched to Select Contracts, located in Whistler, to build a park in Christchurch.

Fast-forward to December 2016, and the park opened to great acclaim after several years of planning and consultancy. The jewel in the Christchurch crown of mountain biking, the park was due to create employment, boost tourism, and give the locals some awesome, easily-accessible trails.

Sadly, only six weeks after opening, the park was ravaged by fire. The fires were much worse than first thought, and the park had to close to fell and remove trees, and to completely rebuilding the park’s trail system.

The park re-opened in Dec 2017, 10 months, later with just a couple of trails. Since then trails have gradually re-opened, with new tracks being built too, thanks to the trail crew and a strong volunteer force.

Luckily, not all the trees disappeared in the fire, nor did the base village — the attractive wooden buildings are set in a small clearing in the forest, and have a real charm to them. Here riders can find guest services, the rental shop with workshop and a well-stocked bike shop, and a cafe/restaurant serving a solid range of great food, quality coffee and a sweet line-up of local beers. Whether you need a pick-me-up or a bit of Dutch courage, you’re well covered! There’s also a pump track for keeping yourself or the kids entertained.

The park now has about 17 open trails, and it’s set to grow further. Incredibly, the park boasts the first purpose-built quad mountain bike carrier in the world. (That is, it’s the first quad lift at a bike park that wasn’t originally built as a ski-resort.) Christchurch Adventure Park also lays claim to being the largest bike park in the southern hemisphere, has four zip-lines, a large cafe/restaurant, rental shop and plans for a mountain coaster.

These are some bold claims and high accolades, but how does the park live up to them?

The lift services around 17 downhill trails, of varying levels, from green to double black, and is pretty quick to get riders up the mountain in around 5 minutes or so. Since the trees disappeared though, it can get a little chilly at the top.

It’s worth mentioning that the park also has a climb trail, for those who want to get to the top under their own steam, but it is quite steep!

Christchurch Adventure Park essentially splits into three sections where trails meet — the top section has a lot of machine-built trail for a mix of abilities, including Airtearoa, an awesome sweeping jump trail full of about 50 massive, beautifully-sculpted tabletops and step downs to rival a certain northern hemisphere bike park.

The green trails are super smooth and flowy with big berms, fun for any ability. There are some intermediate blues, and some of the newer trails are hand-built trails including Yeah Yeah Gnar and Swinger Party. These blue and black trails feature more natural-feeling singletrack with rocks and roots thrown into the mix. Both are serious fun! The top can get a little windy now due to the lack of trees, and it’s usually the least windy in the morning, so get a lap of Airtearoa in as soon as you can!

The bottom half of the park also has a great mix of trails, from fun green trails with some cheeky optional lines developing, plus a flowy blue trail called Handle the Jandal that’s packed with nice easy tabletops. There are also a couple of black trails, the latest of which to open — the Black Pearl — is a double-black diamond that’s super-gnarly with steep rowdy lines, drops, and a large road gap right at the bottom directly under the lift.

The third part of the park is located in the remaining trees directly behind the village. It’s accessed via a link trail which is relatively flat and can get muddy, so a lot of people ride down the road parallel.

There is even the option to ride into neighboring Victoria Park, an area of hand-built downhill tracks. In this area, Kama Sutra can only be described as ‘proper downhill.’ It’s steep, gnarly, and has some big features, which will keep the gravity lot entertained. Shredzilla is a fun black trail with a couple of steep sections and is a lot of fun on a trail bike. Finally, Loess Rider is a nice flowy blue trail with some jumps that experienced riders can boost and still enjoy. 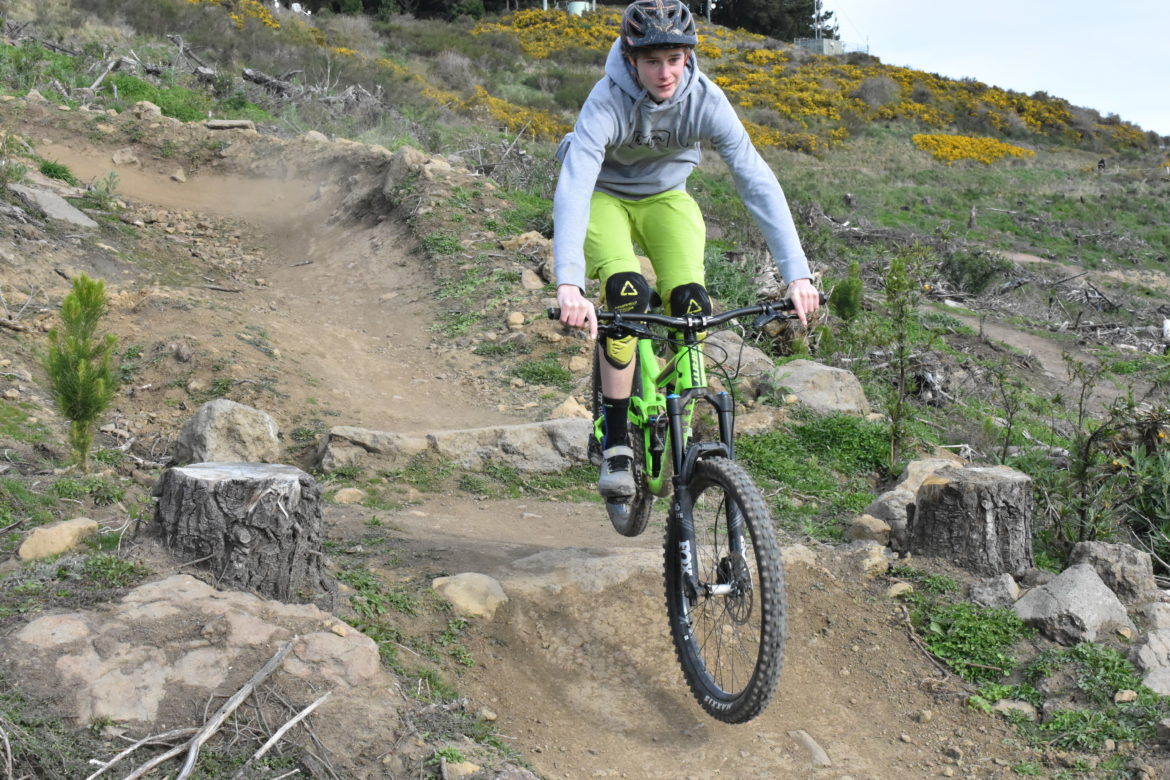 There is still a strong volunteer trail-building force, and the park works hard to cater to local riders with events including pub quizzes, their own (affordable) race series, and extended hours in the summer so local pass-holders can smash out a a few laps after work.

In the few months I’ve spent in Christchurch, I’ve seen the park go from strength to strength in terms of the riding it has on offer, and it’s only going to get better. They have also recently planted around 10,000 trees to replace those that were lost in the fires. It’s only a matter of time before the bike park is back up to full capacity, and let’s be honest, these things can take time. 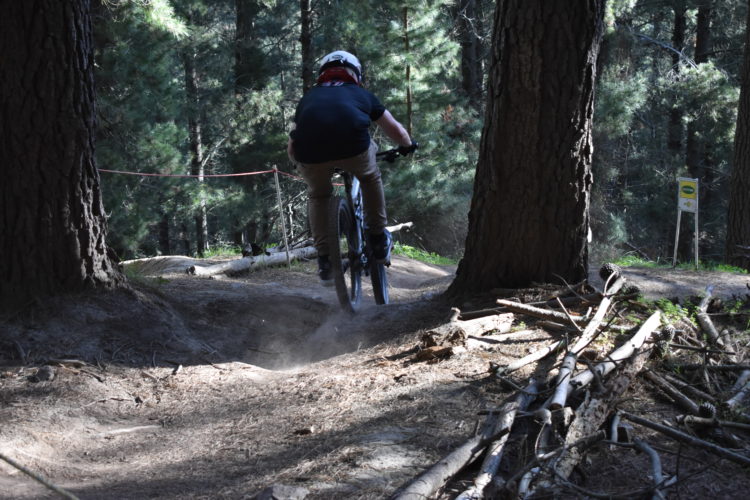 It’s hard to judge the park objectively without either comparing it to what it used to be before the fires, or forgiving it for it’s weaknesses, again due to the fires. The fact is that CAP is a great riding venue in it’s own right and is truly one of the city’s greatest assets. When you combine the park with the other local Port Hills trails, and more further afield (Craigieburn, Mt. Hutt), Christchurch suddenly looks very appealing as a riding destination, and one that I would absolutely recommend checking out if you’re in the country.

The park itself is about a 10-15 minute drive from the city centre (you can see the park from most of the city!), and 20-25 minutes from the airport. It’s an easy drive, and given that the local buses have bike racks, it’s super easy to get to, whatever your chosen method of transport.

CAP claims to stay open 365 days a year, which is pretty amazing, though in reality they are closed when the weather is really bad. Luckily, Christchurch weather is generally pretty good (in this Brit’s opinion), even through winter, and trails are often dry-ish a day or two after rain.

Bike park passes cost $80 NZD for the day, which is in line with other parks, and there are options for limited runs, multi-days, and season passes to cover most bases.

Sam James
Originally hailing from the UK, Sam has been an avid mountain biker for over a decade and a shop wrench for almost half of that, Sam has worked and ridden all over the world in some dream destinations including New Zealand and Australia. Living and working in North Vancouver, BC, Sam wrenches for a high end bike store, and writes for the store and Singletracks in his spare time. Somehow he also finds time to ride his bike a few times a week in between all of that.