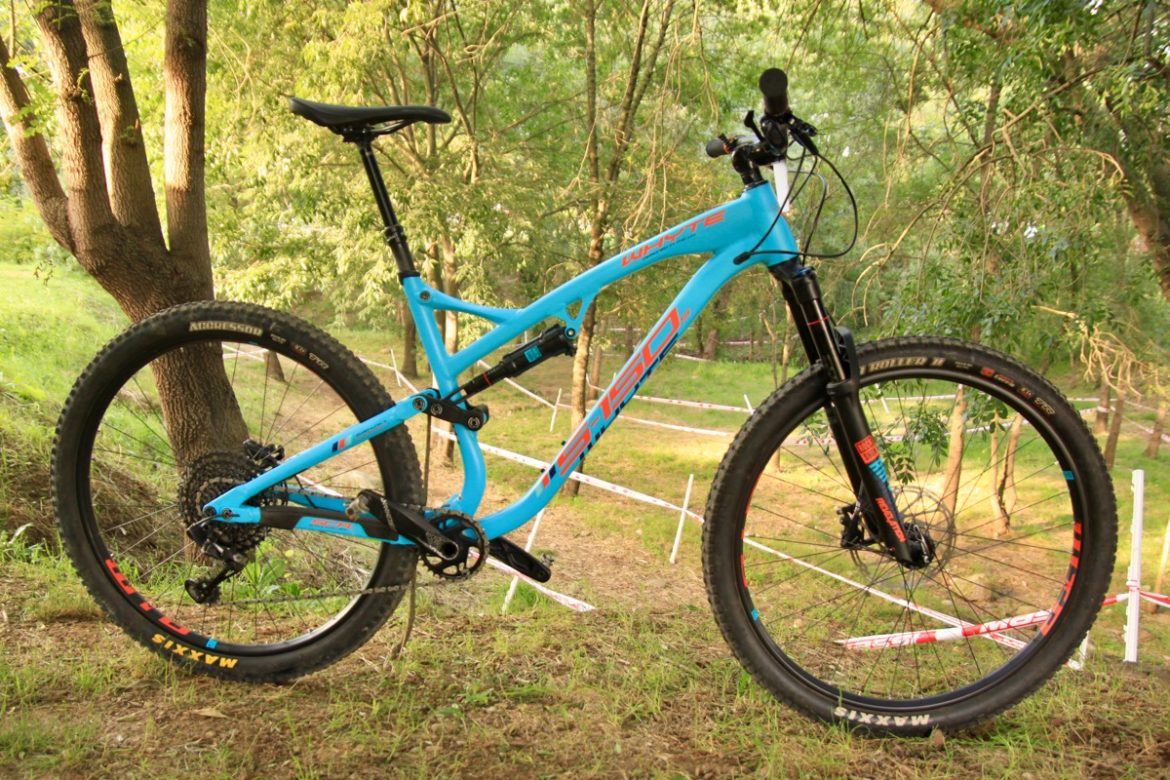 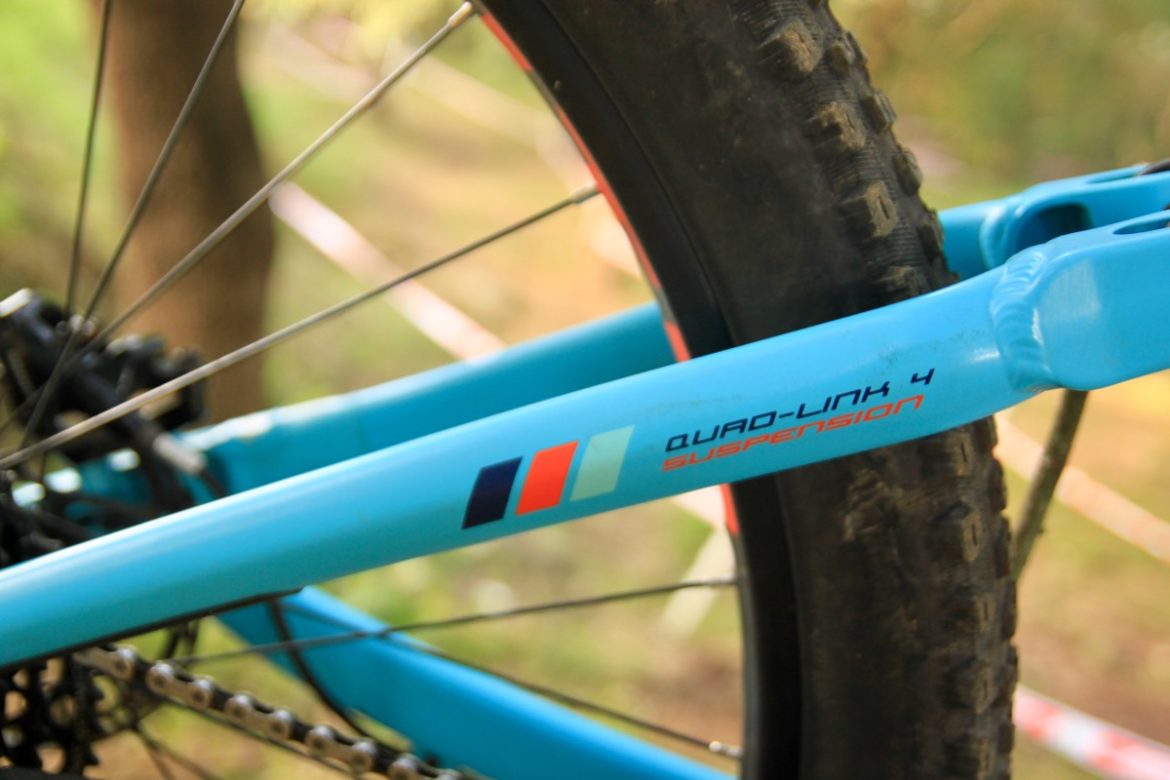 The S-150 S build I tested features an aluminum frame with internal cable routing based around what Whyte calls their Quad-link 4 Suspension system. It’s essentially a 4-bar design, offering 150mm of rear suspension travel. Each of those pivots features “limited rotation, high load bearings” which Whyte guarantees for life. With all the mud, dirt, and grit UK riders encounter season after season, it’s clear Whyte is serious about keeping everything running smoothly. 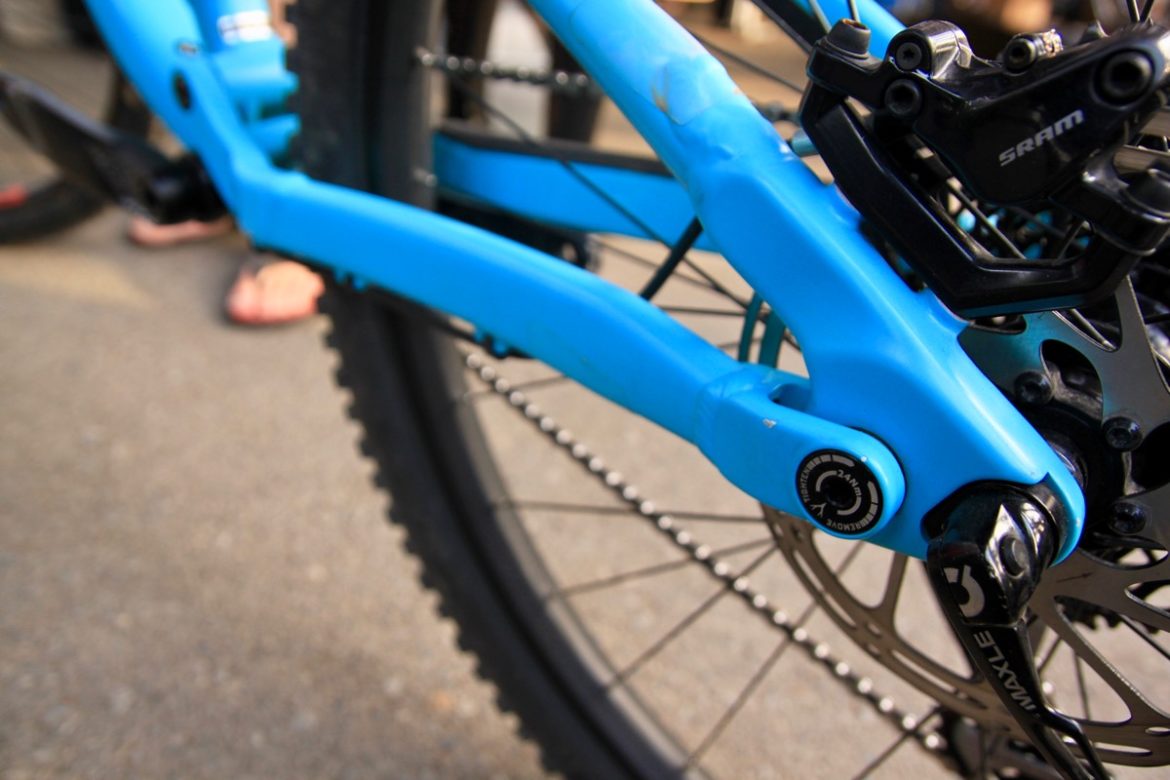 Whyte says the ‘S’ in the S-150 stands for switch, meaning it’s possible to swap out the 29er wheels for a set of 27.5+ wheels and tires. Of course many bikes these days are capable of running 27.5×2.8″ tires, but Whyte claims their frame offers “UK levels” of mud clearance. This is actually a pretty important selling point, as anyone who has converted a 29er knows that tire clearance, particularly in muddy conditions, can be an issue for many bike frames.

The Whyte S-150 is built around a Boost rear end and was designed with the Eagle drivetrain in mind, so running a front derailleur is not an option. A unique weatherproof seat post clamp not only looks neat and clean, it also minimizes muck intrusion into the frame.

Now let’s talk geometry. Whyte is known for producing slack bikes that push the front wheel way out, and the S-150 is no exception, boasting a super relaxed 65.6° head tube angle. Consequently, the S-150 has a long wheel base, along with a long reach, for improved stability. 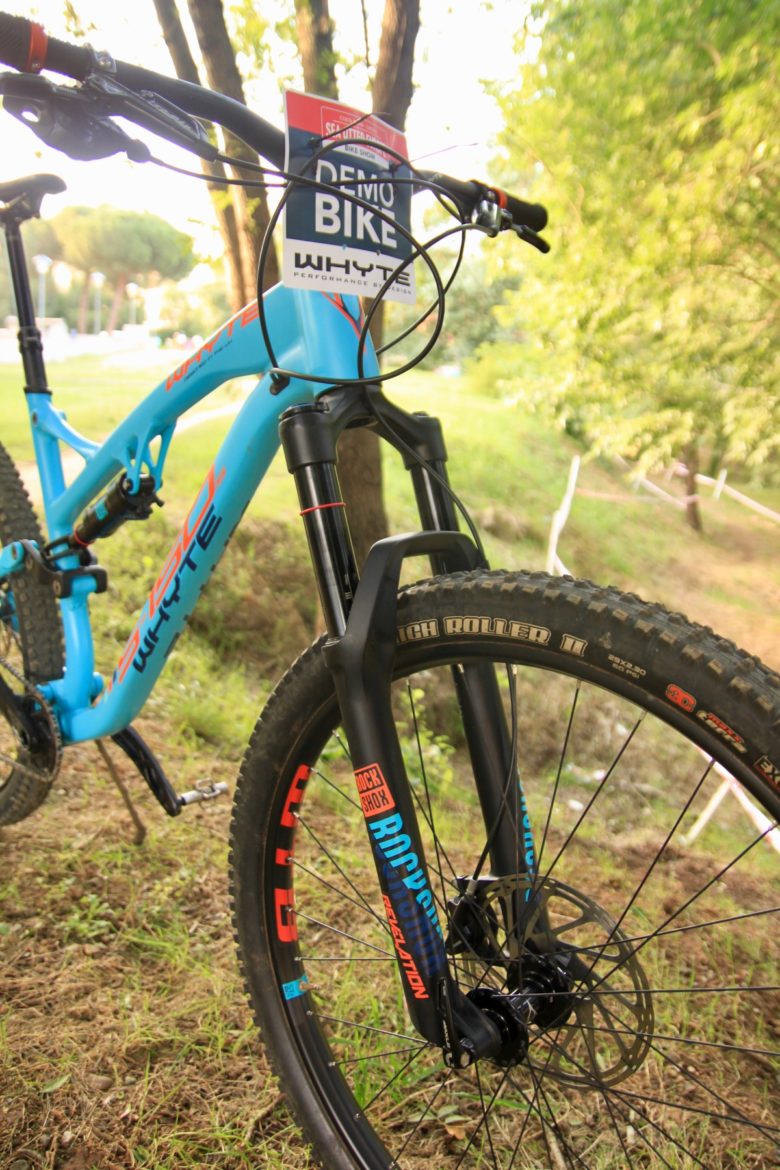 The ‘S’ build is the most affordable S-150 Whyte offers, selling for $2,699 USD (£2850). And still, for that price buyers get a 12-speed, GX Eagle drivetrain, a RockShox Reverb dropper post (a full 170mm on the XL I tested), SRAM Level brakes with a 180mm rotor up front, and Maxxis tires. Admittedly, the 150mm RockShox Revelation fork and the Deluxe RT shock aren’t top-tier, but at this price, I have no complaints. The only other thing that screams “entry level” about the build is its weight, which is 32lbs. or so. 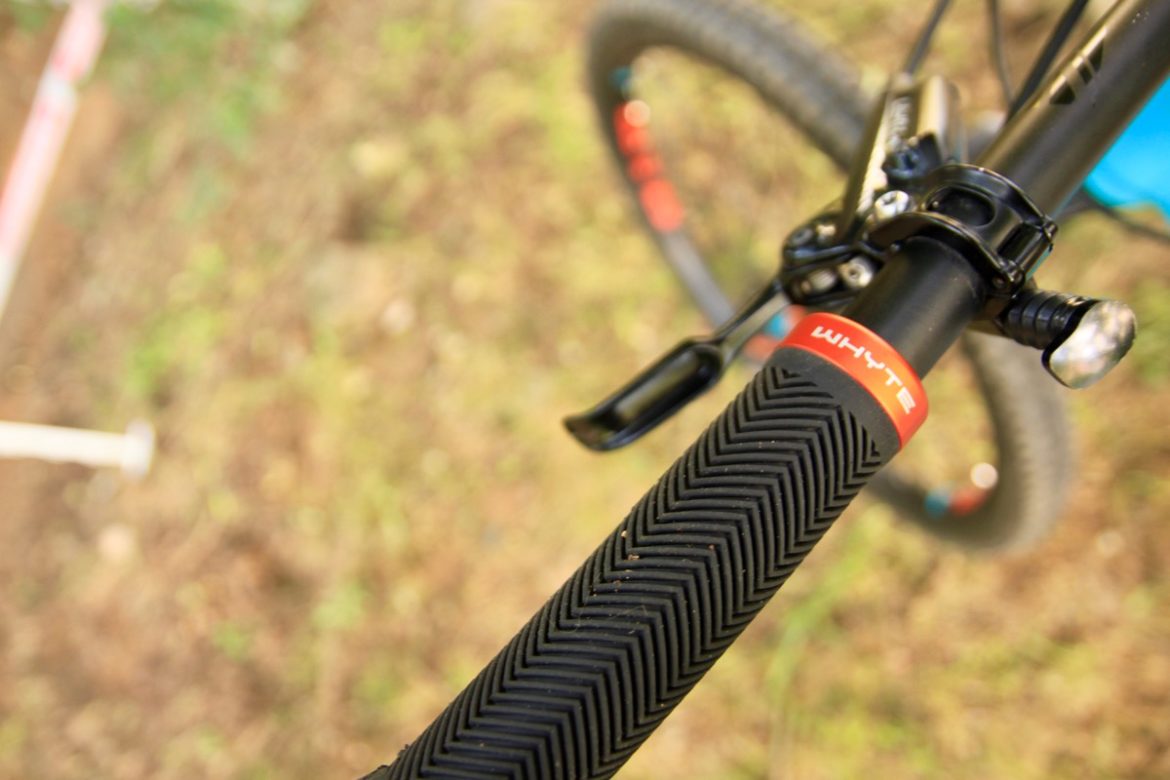 Whyte also offers accommodations for rider height within the build kit. For example, the S-150 is specced with a longer stem (50mm) on large and extra large bikes, and wider bars (780mm) with a bigger rise (30mm) on extra large bikes. The extra large bike even gets a slightly larger rear rotor (180mm) than the other sizes. 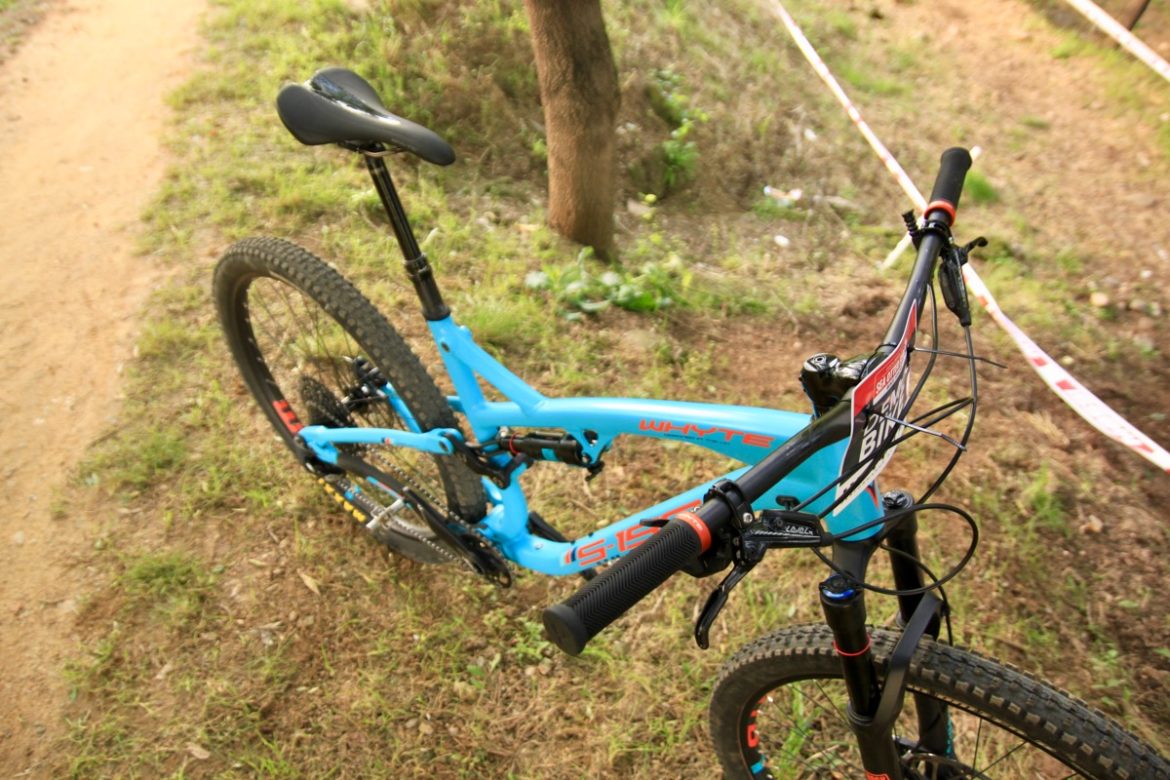 The Whyte S-150 felt great on the climb, despite offering such a slack head tube angle. Sure, having the wheel way out front introduces a little wander, but the reasonable seat tube angle, paired with such a long dropper post, placed me in just the right position to get up the hill with minimal effort.

And despite being on the heavy side of the bikes I normally ride, the S-150 didn’t feel overly difficult to ride uphill, perhaps due in part to the wide range of the Eagle drivetrain. (I’m still running 1×11 on my personal bike.) Of the five bikes I tested on the Sea Otter Europe demo course, I notched my second fastest time up the road on the S-150 without really trying.

I linked up with my new Spanish friend Marc out on the course once again, and this time he was with his local buddy who was fast as hell. We bombed the descents with reckless abandon (well, it felt reckless to me anyway) and the S-150 was up to the task. The bike felt stable and cornered extremely well. The budget-level suspension does leave something to be desired — namely more responsive action and better small bump compliance — but that’s no dig on the S-150, and it’s certainly didn’t come as a surprise to me. 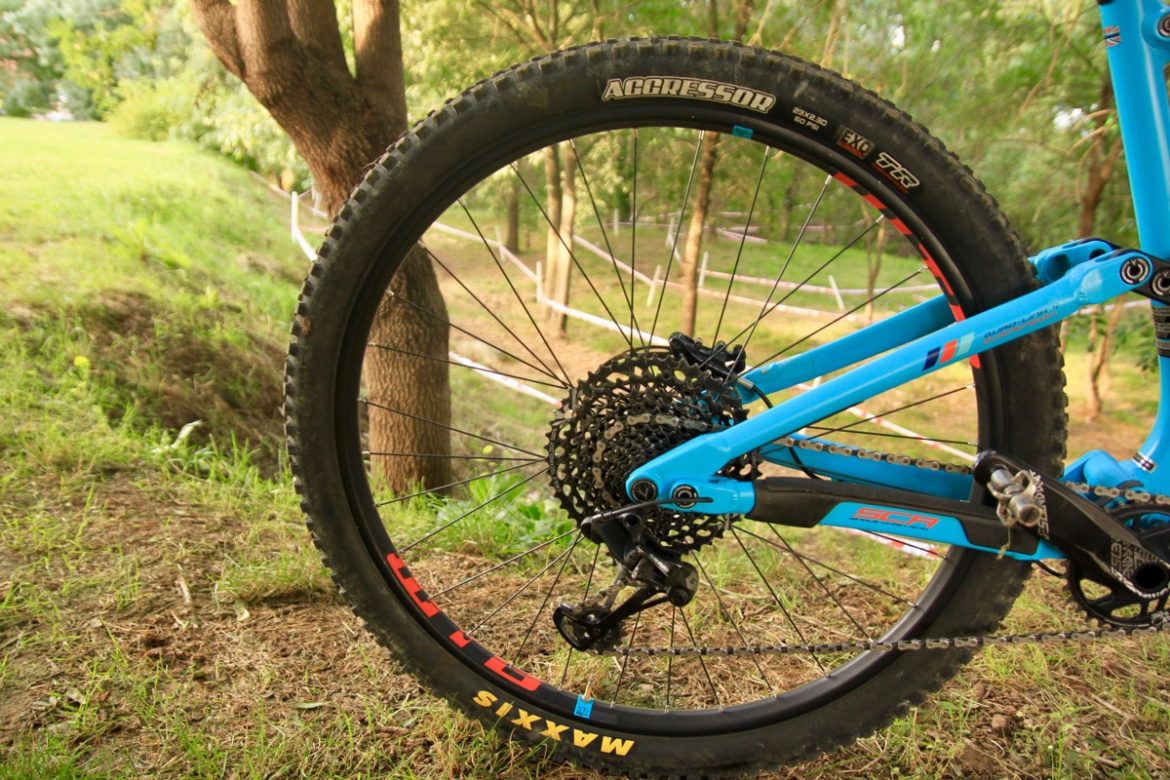 Perhaps my biggest beef based on this short test is with the tire selection, which felt under-gunned for such an aggressive trail bike. I would prefer slightly wider tires than the 2.3s front and rear, with beefier knobs.

All in all, the Whyte S-150 S seems like a great trail bike at an affordable price. The build kit is one of the smartest I’ve seen in a while, and ticks all the right boxes when it comes to trail bikes. Whyte has clearly designed the S-150 with extreme, UK-level conditions in mind, which makes this an even better value when considering how durable this bike should be for years to come, even in challenging conditions.

Looks like a great rig for the money.
Regarding tire choice:
I can see in this day and age that 2.3 doesn’t sound like a lot, but the 2.3 Aggressor balloons up pretty nicely on wider rims. Regardless, 2.3 sounds like a good sized tire for a bike that is spec’ed for wet trail conditions (UK riders, feel free to chime in here).

Interestingly, no mention of chainstay length, and only a vague reference to the seat tube angle.

Another great bike from Whyte. I had considered S-150, but settled on their T-130 as it is better suited for my typical riding conditions. Generally speaking, Whyte’s attention to detail and quality tends to go unnoticed since we’re talking about bikes, after all. But nonetheless, that quality is there. Great customer service as well.

I have the T-130 as well and it’s a really fun, capable bike which got great reviews. After getting into park this year I’m feeling the need for a bigger bike which is still trail-worthy. The S-150 has gotten strong reviews and I would definitely consider this bike. I’ve been impressed with Whyte’s quality and service but I don’t see many here in CO.