Last winter I rode Orange’s Five trail bike, which I absolutely loved. The Five was simple, durable, dependable, and above all: fun. This summer, Orange sent over their new Stage 5, which is essentially a Five with 29″ wheels. Both bikes share the iconic aluminum, made in the UK, Orange frame with its elevated swingarm. In addition, they sport similar geometries and similar amounts of travel.

With such seemingly similar bikes, did I have a clear favorite?

As I do with just about every bike, I chose a size large Stage 5. The frame has 135mm of rear travel mated to a 140mm fork, putting the head tube at a trail-friendly 66.5°. I found the pedaling position comfortable thanks to the steep, 74° seat tube angle. A moderately long reach of 453mm gave ample room for moving around with the saddle dropped, and the low, 335mm bottom bracket made railing turns a breeze.

The geometry of the Stage 5 is very close to bikes like the Santa Cruz Hightower or Specialized Stumpjumper 29. Where it starts to differ is in its longish chainstays (445mm) and wheelbase (1204mm). Overall though, I found the geometry to offer an excellent compromise between climbing and descending, not skewing too far in either direction. Basically, just what you’d want out of trail bike.

Orange’s US distributor Aventuron sent over the RS build of the Stage 5. The RS package runs $5,725, placing it between the Pro ($4,575) and Factory ($7,400) options. With that price tag, you’d be right to expect an impressive build, and the RS delivers. That’s assuming you like SRAM though, as the vast majority of the build is outfitted in their products. The suspension is RockShox front and rear with a Pike RCT3 and Monarch RT3, respectively. RockShox supplies the 150mm-stroke Reverb dropper as well.

The drivetrain is SRAM’s X01 1×11 with carbon cranks, but for 2018 the RS build upgrades to the 12-speed Eagle option. Stopping duties fall to SRAM as well with their Guide R brakes, clamping onto a massive 203mm front rotor and a 180mm rear. Renthal handles steering entirely with a 50mm Apex stem, an 800mm Fatbar, and Ultra Tacky grips. The saddle is an SDG Fly, which is fast becoming a favorite.

One particularly bright spot in the already shiny build is the wheelset and accompanying rubber. Orange went with 30mm wide Race Face Arc rims laced to Hope Pro 4 hubs, wrapped with a Maxxis Minion DHF tire up front and the High Roller II in the rear.

With a beefy metal frame and mostly metal parts, you might assume the Stage 5 isn’t the lightest, and you’d be right. However, it sits right at 30lbs, which is acceptable for a trail bike regardless of material.

Compared to the Orange Five, the Stage 5 needs a bit more spur in its side to get moving. The 29″ wheels, burly rubber, long chainstays, and 30-pound weight all conspire to give the Stage a bit less quickness off the line against its smaller-wheeled sibling. Once up to speed, that sensation isn’t as apparent, but my legs certainly felt it at the end of long rides. I’m glad to see the bike getting the 50-tooth Eagle pie plate for 2018; your legs will thank you too.

Apart from the initial sluggishness, the Stage 5 is a completely competent climber. As a single pivot, you’ll get some feedback through the pedals in certain situations, but it’s an easy trait to adapt to. The wide rims and meaty tires provide an abundance of traction for clawing up the chunkiest of climbs. A smaller tread on the rear would add some giddy-up to the Stage’s climbing manners, but as is, it’ll get you to the top… eventually.

Small bump compliance from the Monarch was just okay, with noticeable stiction off the top. This wasn’t something I experienced on the Five I tested, but that bike used a much higher end Fox Float X shock. I’ve also been riding more bikes with metric-sized shocks which are perceptibly more supple, which played into it as well. Once into its travel, the feeling from the Monarch improved, though. I did bottom out the shock numerous times, but that has more to do with the bike’s personality, which eggs you on during descents.

Up front, the Pike proved a great match for the Stage. At 140mm of travel with Boost spacing, the fork is plenty stout — even for a large rider like myself. Its stroke was supple, controlled, and consistent, just like every other Pike I’ve ridden.

Get your Solo cups out, ’cause this bike likes to party! I threw the Stage down the steepest, gnarliest descents I could find in North Georgia. How steep? Try 1,800ft of elevation loss in under two miles. The slack front end, long reach, chainstays, and wheelbase imbue a remarkable level of confidence when things get fast and steep. Despite a moderate amount of travel, the Stage is impressively composed at speed. 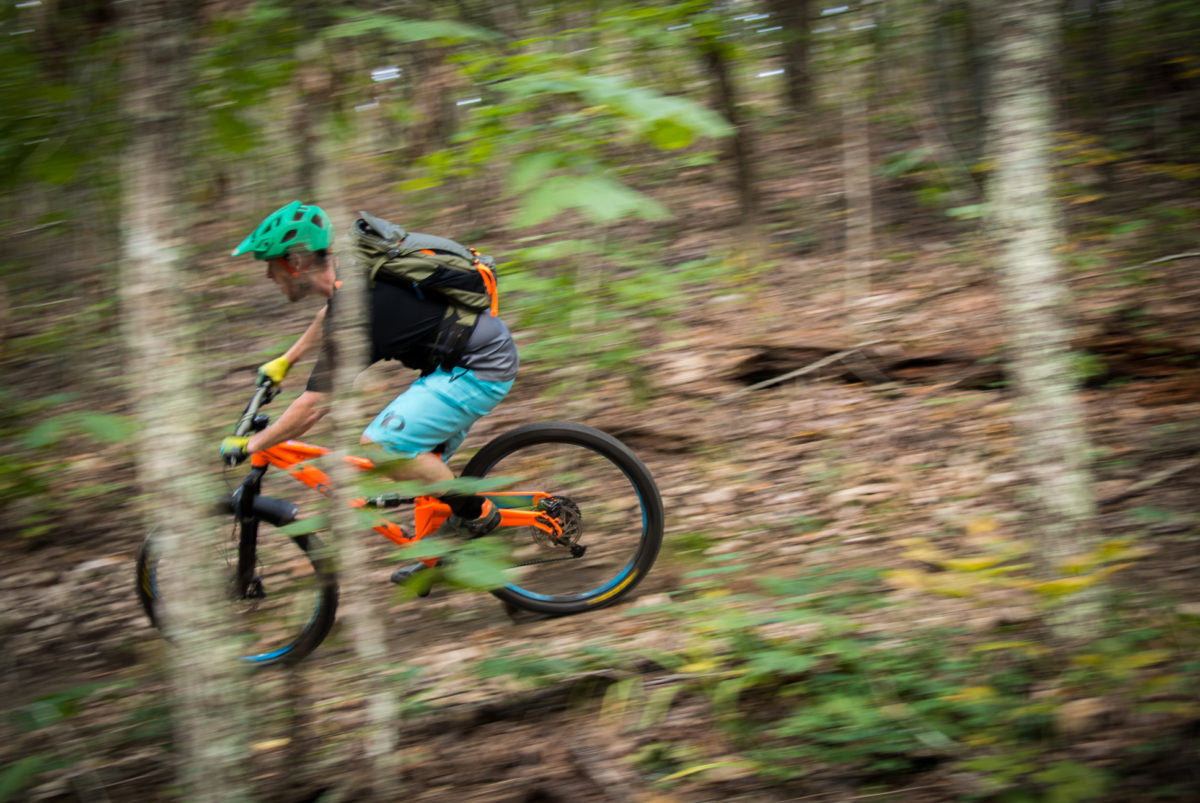 Those long chainstays didn’t impact the Stage’s cornering prowess as much as I anticipated. Its length was evident in tight switchbacks, but with more room to run, the bike locked into corners as if on autopilot. Credit that to the low bottom bracket and again to the superb traction from the wheels and tires. For such a long bike, the Stage’s eagerness to switch directions was a surprise. S-turns were an absolute delight: unweight the bike, flick it to the side, drive through your heels, repeat.

The Stage loves to gain speed and does so quickly, so kudos to Orange for speccing a 203mm rotor up front. One thing I’ve been relearning this year is that if you want to go really fast, you need really good brakes. This particular set of Guide brakes was up to the task and trouble-free. 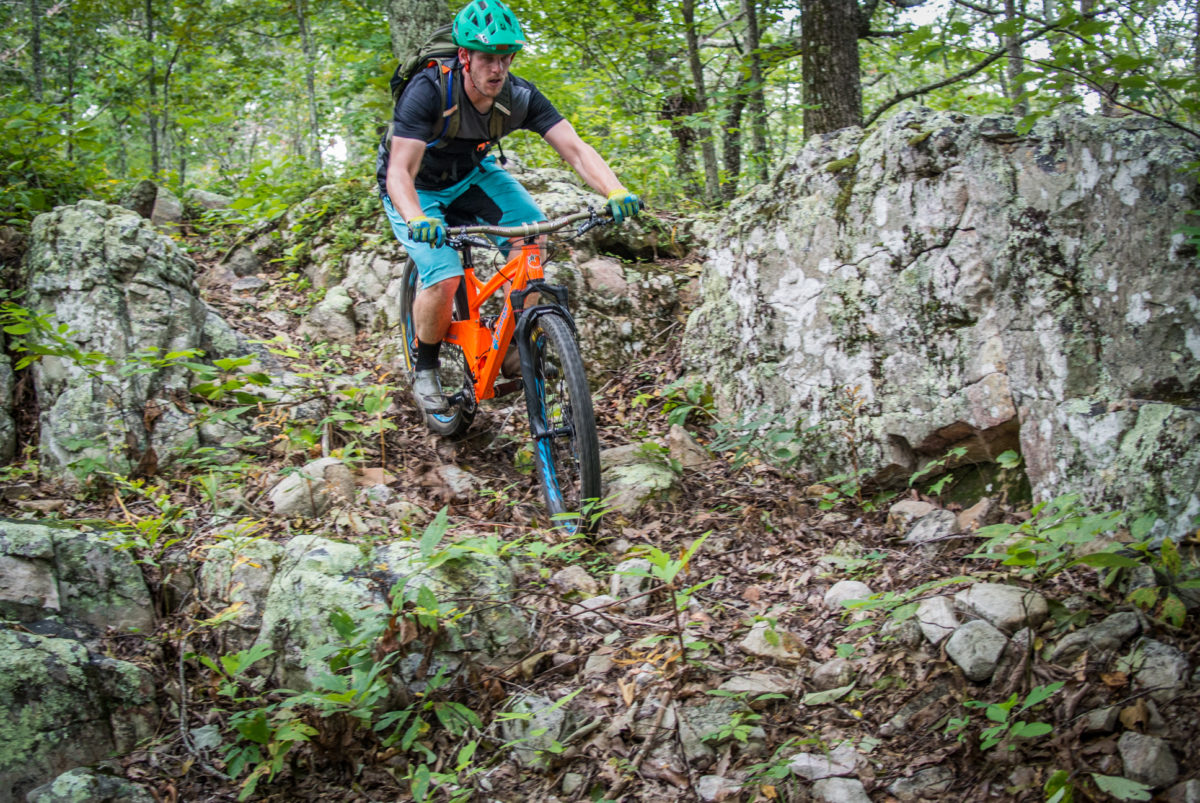 Back to the question I posed at the start: did I have a clear favorite between the Stage 5 and the Five? Personally, I’d give the Five a slight edge. It doesn’t give up much in plow-ability to the 29er, but the Five is markedly snappier from the gun. I was surprised I liked the Five more since I typically prefer 29ers.

Some riders will never understand the appeal of Orange bikes, and I get that. The elevated swingarm creates a certain aesthetic not everyone likes. For others, the suspension isn’t “fancy” enough. Or maybe it’s because they don’t come in carbon. Or, it could be the price. Whatever the reason, Orange’s bikes aren’t for everyone, and that’s probably part of the reason I enjoy them so much. I’m lucky in that I get to ride a shit ton of different bikes for my job. In my experience, Orange makes some of the best-riding — and just sheer-fun — mountain bikes on the market. 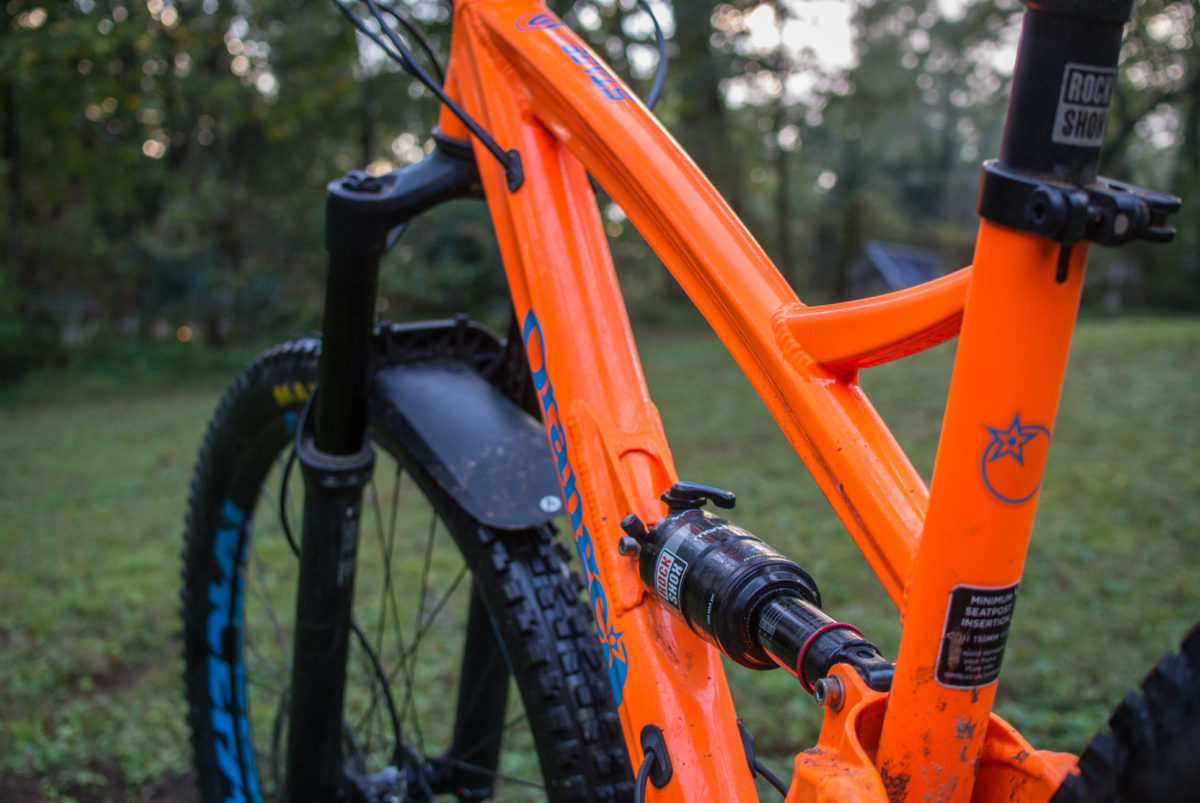 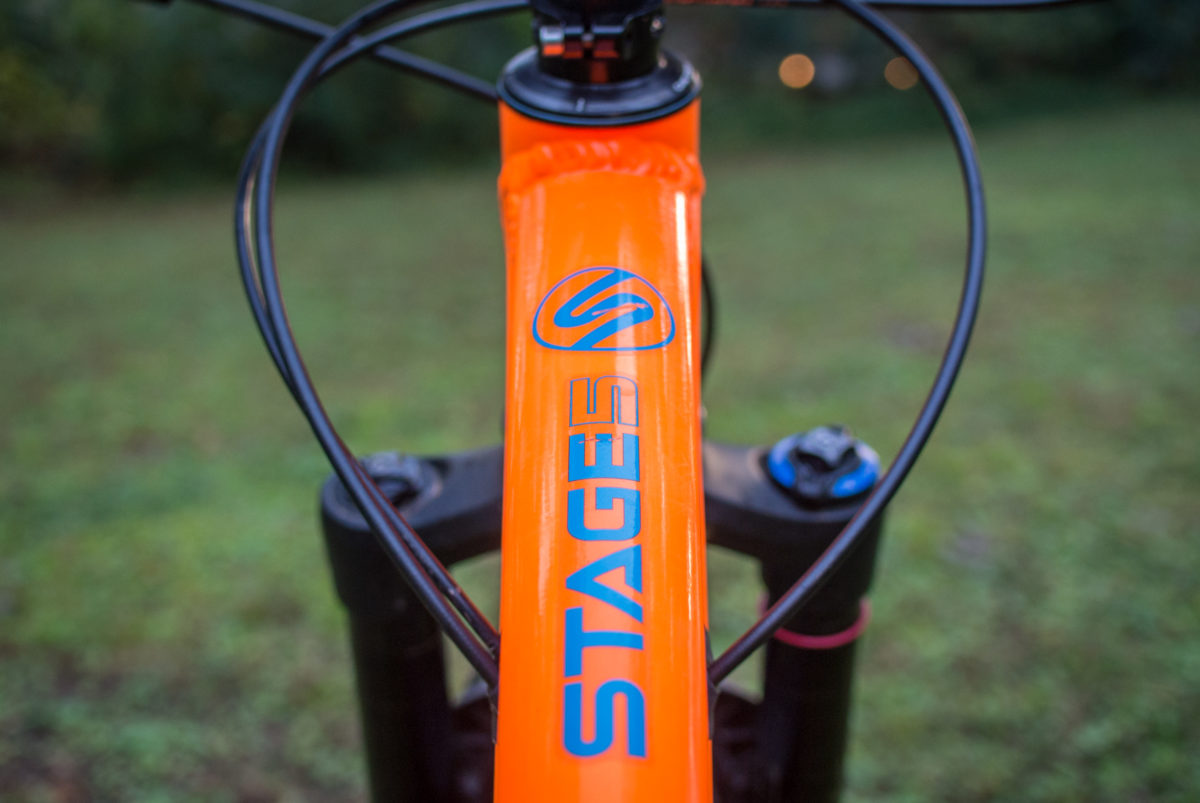 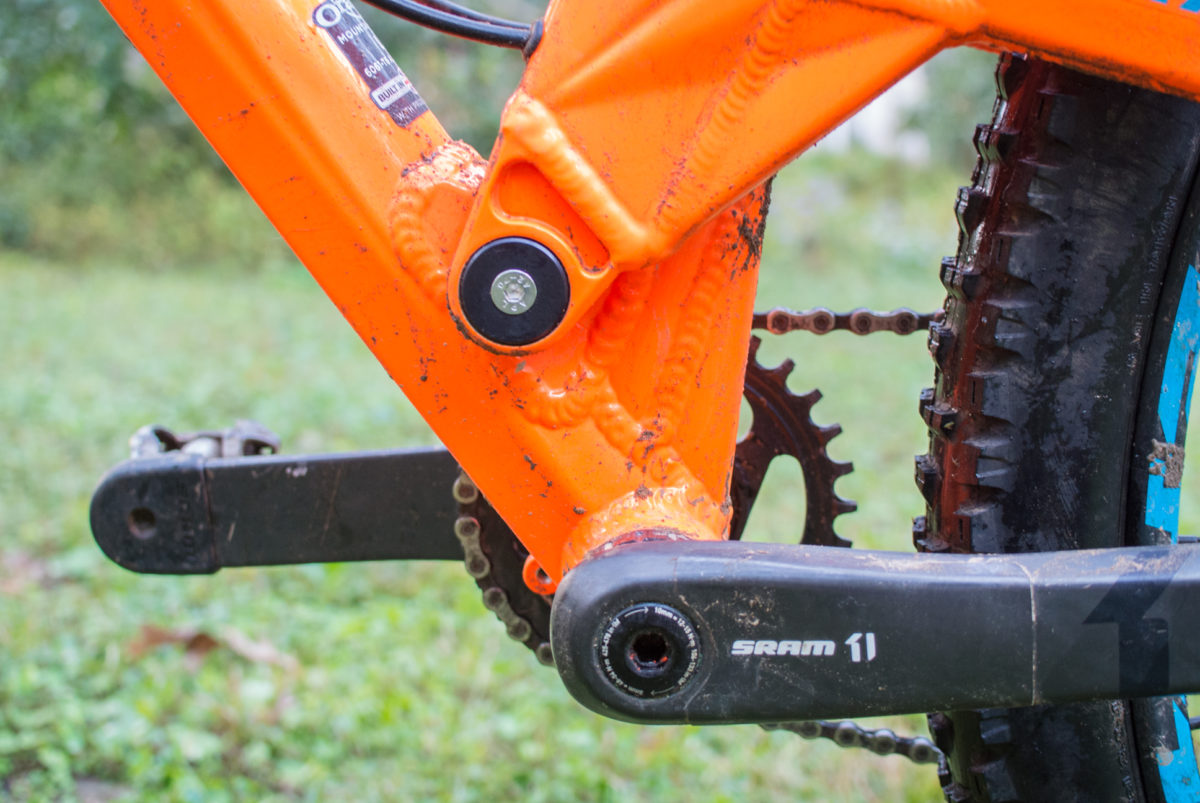 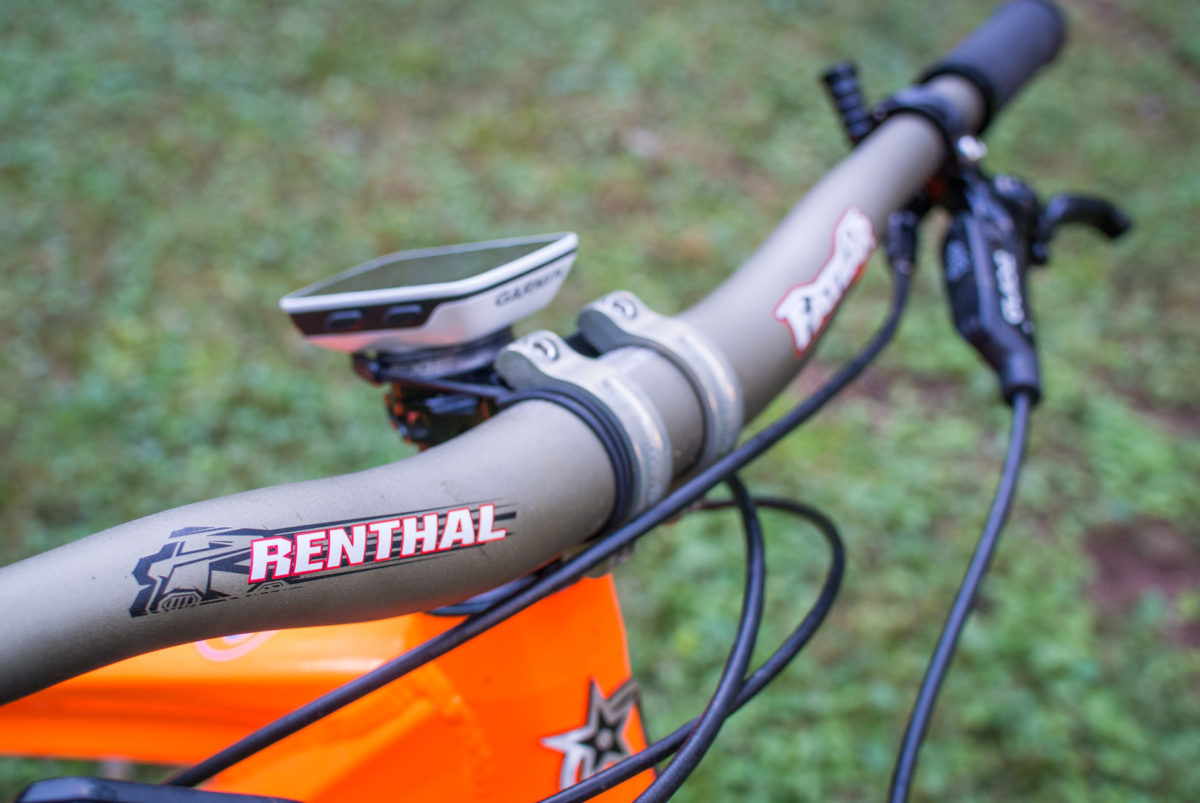 Thanks to Orange for lending us the Stage 5 for review.