Until the explosion of the fat bike, cycling was a warm-weather sport for most people. But now, as more of the masses take on the snow and frigid temperatures, there’s also more of a demand for high-quality cold weather gear. 45NRTH, based out of Minnesota (where they really know cold), meets that demand with their line of winter cycling accessories and apparel, including footwear, gloves, pogies, headwear, and pedals.

Right before this winter season, I treated myself to a pair of 2014 Wolvhammer boots–45NRTH’s warmest cycling boot–and it’s definitely been one of the best bicycle-related purchases I’ve ever made. In the past, I had gotten by with shoe covers, or riding in hiking boots with flat pedals on the colder days, but none of that really cut it. My feet tend to get cold more easily than anything else, so when I was deciding on a winter boot, I knew that I should just go all-in and get the warmest. 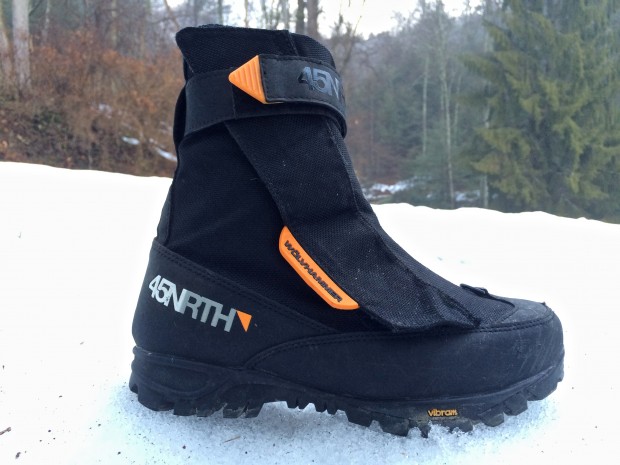 Despite the hefty price tag ($325), I was immediately very pleased with the Wolvhammers. They are quite a bit heavier than many other cycling shoes or boots, but don’t feel clunky at all. They’re actually much more comfortable than my regular bike shoes to walk around in, and are perfect for snowy and icy conditions, when hike-a-biking is often necessary.

The outside of the boot features a waterproof-breathable membrane, which allows moisture from the inside, such as perspiration, to get out, while blocking water from the outside from coming in. I’ve put my foot down in streams and not gotten wet, as long as the water doesn’t enter the boot from the top. There are hooks for gaiters built into the boot for deep snow or extremely wet conditions to alleviate such an issue.

In my experience, the sweat-wicking mechanism also seems to work pretty well. I’ve used the boots in temps into the 50s, and even though my feet were a little too warm, they stayed fairly dry and didn’t get soggy. 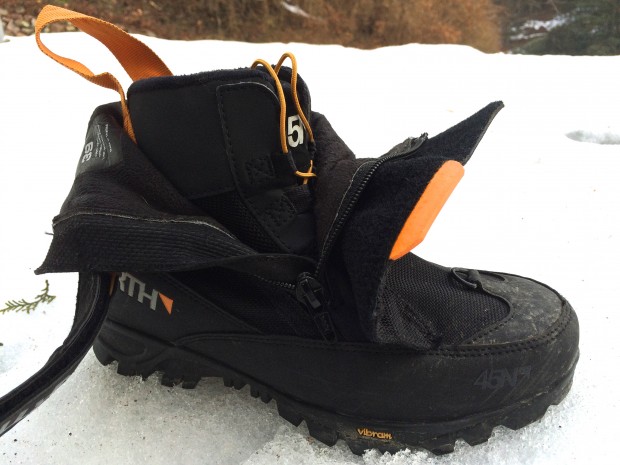 The inside of the boot is lined with Primaloft Gold and uses Aerogel technology in the insole to help prevent the cold from seeping in from the cleats. Aerogel uses very tiny air pockets for insulation, remaining ultra-thin and compact while delivering extremely low thermal conductivity.

The Vibram sole is grippy and durable, and quite reminiscent of a hiking boot. There is a hollowed-out spot on the sole for the cleat, but it also comes with a bolt-on cover should you choose to ride flats instead.

The boots are kept snug by a draw cord, and the outer shell closes with a zipper and velcro flap to keep out the weather. I have found that the zipper can be a little tricky to close at times, especially if I’m wearing thick socks and a double layer of pants, but it’s very effective otherwise and has held up well for me. I know a couple others who haven’t been quite so lucky, though–I’ve heard of the zipper breaking on multiple occasions, which is a bummer considering the price of the boot, but keep in mind they’re also being tested by the most extreme of conditions. 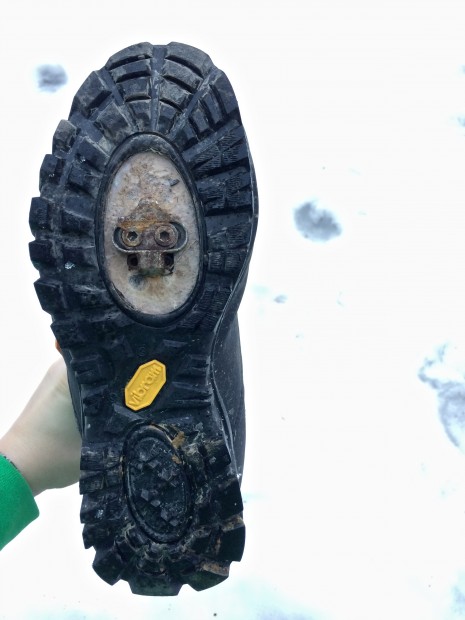 The Wolvhammers are rated for 0-25 degrees, but I’ve worn them in temperatures slightly below zero up to temperatures in the 50s, and they were comfortable enough throughout that spectrum of conditions. Below zero, my feet definitely got pretty chilly after some time on the bike, but they were definitely warmer than if I had been wearing any other shoe I own. For me, they are most comfortable from about 10 degrees through 40 degrees, but my feet tend to be colder than most.

I much prefer the Wolvhammers to shoe covers even in the in-between temps, so I’ll choose to wear them with a lighter sock until it’s time to switch to the summer shoes. 45NRTH does make a lighter shoe, the Fasterkatt, which is an excellent choice for transition seasons.

If you haven’t gotten the picture already, I think the 45NRTH Wolvhammer are pretty awesome. I can confidently say that my cold little toes have never been happier, and the Wolvhammers have definitely made winter riding much more comfortable.

Nice review! I was going to get myself a pair of these this winter, but somehow winter is already over here… at least, down in town. Maybe next year.