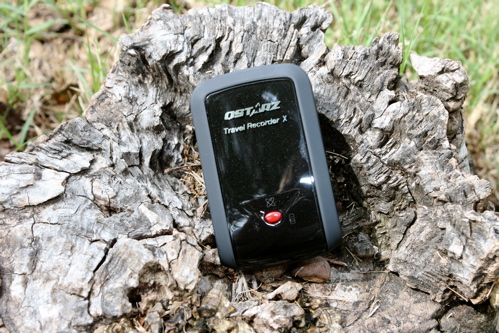 Regular readers know I’m a nut when it comes to GPS and mountain bikes and these days it seems like more and more riders are catching the fever. The problem? Using a GPS on the trail and managing the resulting tsunami of data is still pretty complicated. That’s why I’m super impressed with the Travel Recorder X from QStarz – it’s GPS made simple.

Before I get into describing the Travel Recorder X, it’s important to talk about the competition. The latest GPS units from Garmin and others sport color touch screens and hundreds of menus and functions packed into a fairly bulky package that’s not really designed for mountain biking. The software included with these GPS units is generally just an afterthought and is often both limited and confusing at the same time. These GPS units are great if you’re looking for a multi-function solution or if you need navigation functionality but for most they are simply overkill.

If, however, you’re looking for a simple, reliable way to map trails and geo-tag photos along the way, the Travel Recorder X is your man. I have to admit that when I first opened the box I thought the Travel Recorder X was a joke – it looks just like a pager from the 1990s (minus any kind of display). The GPS has just one switch and a single button for marking waypoints and the first time I used it I wasn’t sure if the thing was even working. Still, I turned it on, tossed it into a webbed pocket on my Camelbak and rode. Back at the car, I switched the GPS off and forgot about it, not sure if it recorded anything at all. 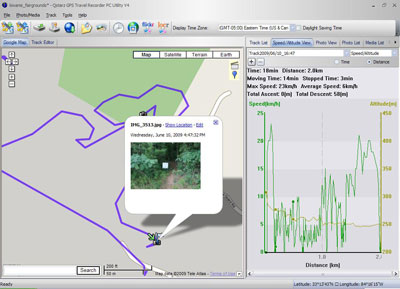 Back at home I fired up the included software and after a few missteps installing the driver I was able to quickly download the data and to my surprise, I saw a Google Map with my exact route! The software even includes a track editor that lets you move and delete trackpoints and waypoints. You can split and merge tracks and even export your data to other formats (like GPX, KML, even HTML) for use in programs like TopoFusion and Google Earth. Seriously.

The really cool part about the included Travel Recorder software is that it makes geo-tagging and sharing photos simple. I tossed a directory of pics I snapped along the Kiwanis Fairgrounds trail into the program and it automatically placed the correct pics in the correct locations on the Google Map – done in less than 5 minutes. Sharing your geotagged pics and maps is simple too with the built in flickr, locr, and HTML export buttons (here’s a quick map I created). You can also use the Travel Recorder software to view things like speed and altitude data from you ride, among other things. 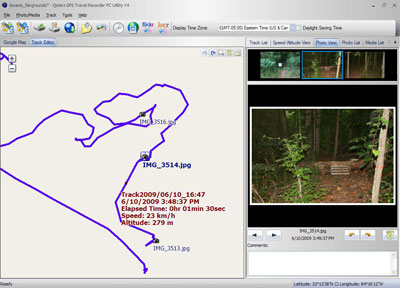 The Travel Recorder X can be paired with a PDA, smartphone, or laptop using the included Bluetooth connection which makes this little device even more versatile. Remember, there’s no screen on the device itself so if you want to use it for real time navigation you’ll need to pair it with a phone or computer. QStarz claims a 15 second satellite fix and the Travel Recorder X uses a built-in rechargeable battery. A USB and DC plug for the car are included.

If you’re still trying to wrap your head around the idea of a GPS without a screen, here’s an analogy: if the Garmin Colorado is an iPod Touch, the QStarz Travel Recorder X is an iPod Shuffle. While the Travel Recorder X may not be for everyone, it’s the best solution we’ve seen for simple mapping and geotagging photos on the trail. At just 2.2 ounces it’s also one of the lightest and most compact devices we’ve seen and includes some truly great software to boot. Pick yours up for less than a hundred bucks!

ON the hardware side I enjoy similar (basic) functionality with my cheapo Royaltek, but it looks like this one comes with WAY better software.

I’m going to check it out!

Also, did you notice the sports/training software add-on at the Qstarz web site?
http://www.qstarz.com/Products/Software%20Products/QSports-F.htm

Nice, I hadn’t seen that. Looks like it has a lot of the same functions but also includes a calendar view and better graphs / stats.

I’ve always wanted a micro-recorder to be built into my GPS unit.

For example, if I’m riding a trail to prepare for upcoming work. I could hit the “mark” button, then hit the record button and give a brief description of what needs to be done there. Go home and download it all and print it.

Does thing do that?

No, it just records GPS data. Might be an iPhone app out there that does what you’re talking about…

Now if you had a voice recorder that added digital timestamps (like a camera does) to voice files, then you would be in business. You’d still need both devices and you’d also need software to match GPS data and voice data but it seems totally possible.

My GPS acts as a simple logger like this one, but I have an app loaded on my Palm Treo where I can connect to the GPS via bluetooth, grab my coordinates, and enter a note to go with it, then do other stuff with it later, for example match it up with a photo or make a google maps point of interest.

Dam.
and I just spent how much on a GPS and software? Oh well.

My contact at QStarz tells me the “Sports Recorder” units come with the sports/training software but I’m guessing that software doesn’t allow you to geo-tag photos like the “Travel Recorder” software does. One of their Sports GPS units looks small enough to put on a keychain:

There’s freeware for geotagging, so that’s no big deal.

Anyway, can you report on the durability of this unit? I’m in the market for another logger as my Royeltek has crapped out and their tech support is no help 🙁

I can’t comment on long term durability but I’ll say since this thing is so simple it will probably last a while. In terms of tech support I wouldn’t get your hopes up on QStarz or any other GPS manufacturer 🙂

That is pretty sweet, and seemingly painless. I think I need one.