We recently asked Singletracks readers which devices, if any, they used to track distances during mountain bike rides. As it turns out, there are a number of approaches being used out there, with no consensus on the best method.

Looking at the chart below, it’s obvious that using a smartphone app alone to track trail distances is the most popular choice among mountain bikers today. Most apps are free or have a minimal cost associated with them — generally less than $10 — which makes them generally less expensive than even the most basic cyclocomputer. 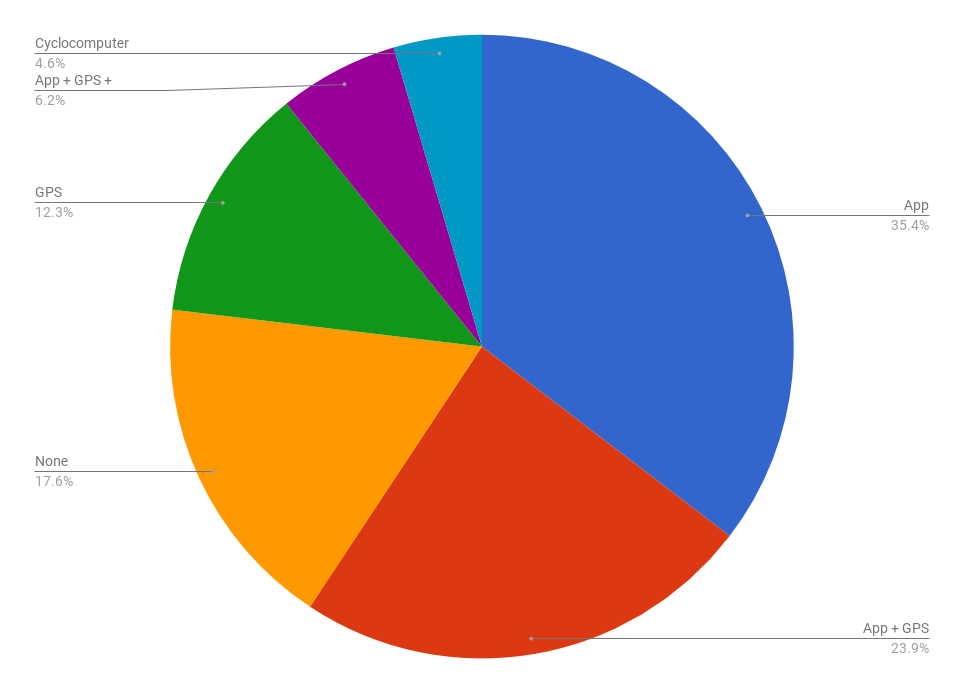 Not only that, another 18% of survey respondents don’t use any device to track distances on the trail. Altogether, that means 53% of Singletracks readers spend little to nothing to track the distances they ride.

The Unconcerned Outnumber the Truly Obsessed

Going back to the nearly 18% of mountain bikers who report not tracking distances on the trail at all, it’s interesting to compare this to the 6.2% of riders who feel the need to use an app, GPS, and cyclocomputer for their rides. Essentially the unconcerned riders outnumber the obsessed by nearly 3 to 1. Perhaps this is due to some sort of backlash to all the tech that has invaded our lives, or maybe some people still don’t own a smartphone. It’s hard to say what’s motivating this particular segment of riders.

But what about the riders who use both an app AND a GPS to track ride distances? In my personal opinion using two devices is going a bit overboard, but clearly many riders choose to do so: almost 24%. Let’s just say these riders are merely obsessed, but not truly obsessed.

Have We Reached Peak GPS?

I was able to dig up some survey data about GPS use among mountain bikers dating back as far as 2006. 11 years ago, there were no smartphones, and using a GPS for mountain biking was pretty rare: only 15% of our readers reported using one on the trail. That number crept up fairly steadily through 2010 (the last year for which we have data) when 26% of riders reported using GPS.

Fast forward to 2017 and 42% of mountain bikers are using GPS on the trail, either alone or in combo with another device. The trendline going back to 2006 is a nearly perfect fit with a straight line increasing 2.5% per year. So if I had to guess, I would say GPS use will continue to increase next year by roughly 2-2.5 percentage points. It seems smartphone apps haven’t killed the GPS for mountain biking just yet.

App use is quite robust among mountain bikers, however, with 66% reporting use of a smartphone app for tracking riding distances.

What, if anything, surprises you about these results?

I use a few apps to navigate / track mileage. Strava, endomondo, trail forks and mtb. All have their strong points but the common denominator is they are on my smart phone. I never ride without it, love having it as for the safety aspect.

I measure trail miles by how quickly and for how long I collapse after the ride.:nerd:

I wonder if folks in the survey got confused and answered App + GPS when using only a smartphone… they are technically different components in the phone. If not, seems a bit over the top to use both.

Where are all these surveys I keep reading about on here? I’ve not been surveyed!

Interesting results. Never seen anyone with phone, gps and cyclocomputer mounted on the bike.

I have great luck using my TomTom GPS watch that tracks running as well as cycling. It uploads all my data to Strava and a couple other sites I use to track my activity history.

I often use both a phone app, and my watch GPS. Only because sometimes the GPS watch or app has a problem and loses satellite reception and I use the other as a backup. My watch GPS has many more variables it tracks (such as heart rate) than my phone, so I rely on my watch if it is working fine.