SRAM offers three categories of complete wheelsets to cover the spectrum of mountain bikers: Rise, Roam, and Rail. Those monikers probably give you a clue as to each wheel’s intended purpose. Rise wheels are for XC racing, Roam is a general-purpose set, and Rail is for more aggressive riding. Within that last category, SRAM offers the Rail 40 and Rail 50. The 40s, tested here, are the less expensive of the two options with a retail price about $700 for the set.

If you’re looking for wheels with mega-wide rims, these aren’t them, so feel free to stop reading. While the rims have a deep profile, especially for aluminum, they measure “only” 23mm internally. SRAM opted to use a true UST rim profile, likely for compatibility with the broadest range of tubeless tires.

Spoke count is low at 24 front and rear. The spokes themselves are double-butted and bladed. For ease of repair, the Rails use the same length of spoke front and rear, drive side and non-drive side. SRAM calls that little bit of tech Solo Spoke. 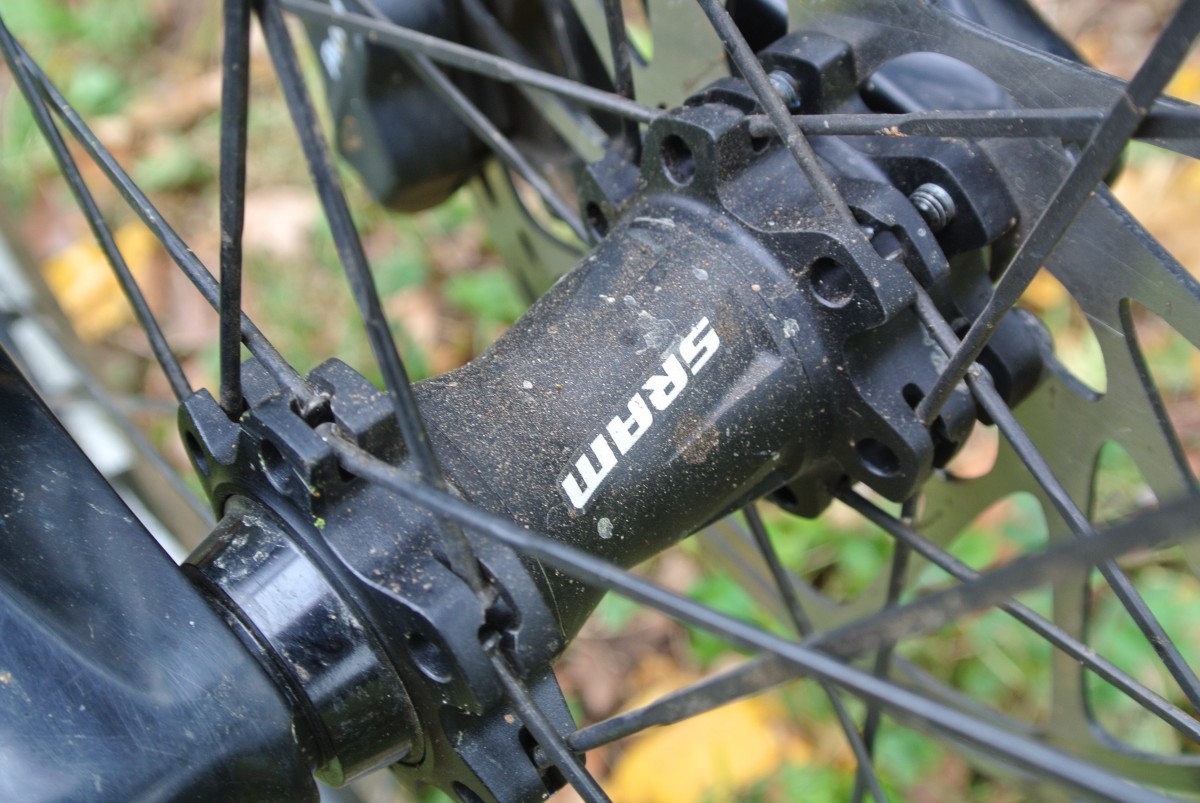 As you would hope, the hubs are convertible to a variety of different standards. Rear hubs can be fitted with either 10-speed or XD drivers. Since SRAM–along with Trek–pioneered Boost spacing, it’s no surprise that the Rail 40s are available with 15×110 front and 12×148 rear hubs. Rear hub engagement is decently quick at 6.9-degrees. There are four pawls, but they are offset so that only two are engaged with the drive ring at any given time.

Aesthetically, the Rails look sharp with their matte black anodized finish and minimal graphics. The finish proved to be durable, and even after a few months of riding, the wheels look great.

During the test, I used both Maxxis and WTB tires on these wheels. The WTB tires were a really tight fit, although that’s a product of the bead, not the wheels. The same tires were difficult to mount on other rims. Maxxis’s tires went on without a struggle. Regardless, getting the tires to seat was accomplished with a standard floor pump.

I have to admit that I was concerned about the low, 24-spoke count. Even though these wheels are designed specifically for rough terrain, I’m a big dude and I’m rough on wheels. My personal preference is to have 32 spokes. For the most part, I needn’t have worried. Riding the wheels revealed them to be surprisingly stiff and robust. However, on one particularly wonky landing, I was able to burp the rear tire and cause a couple spokes to loosen.

Interestingly, the rim had very little wobble to it after this mishap, which leads me to believe the rims themselves are stout. After a couple of turns of the spoke wrench, I was back in business, and the wheels remained true for the rest of the test. I did bottom out the tire on the rear a few times, but the rim has remained dent-free.

What’s more concerning to me is burping the tire. I’m not sure exactly what pressure I was running, but it couldn’t have been too far off my typical 30 PSI in the rear. Granted it burped during an extremely sideways landing on my part, but I think a wider rim could prevent this almost entirely. Burping a tire used to be a somewhat regular occurrence for me several years ago when running tubeless. However, after moving to rims that were 25mm wide internally–or wider–it hasn’t been an issue. The Rails are just a hair narrower at 23mm, so maybe it was just an isolated incident.

These wheels are noisy, and I’m not talking about the sound of the freehub. When you’re loading up the wheel in a turn, there’s audible feedback from the spokes as their tension changes. It can be distracting, and had me thinking that my spoke tension was off. At first I would stop and squeeze the spokes to make sure none of them were loose, and they’d be fine. Eventually, I learned to keep riding, but it’s not something I should have needed to worry about in the first place. The freehub itself does make a nice buzz when coasting, without being obnoxiously loud.

Also, the XD driver body comes off the hub–with your cassette attached–too easily. I found this out the hard way. I had taken the rear wheel off to work on my bike and leaned it against a pole in my basement. A few seconds later I heard a “SMACK!” and saw my cassette lying on the concrete floor. The cassette was ok, but I can only imagine how much it would suck to damage an expensive SRAM 11-speed cassette, or to have a pawl fall out during a trailside repair.

The Rail wheels do have some good things going for them. They’re stiff, not too heavy, the rims are burly, and rear hub engagement is quick. However, in my opinion, the wheels need some improvements before I could recommend them. The rims are too narrow. It’s not necessary to go all the way to plus-sized territory, but I’d like to see them at least 25mm internally. They need more spokes, which would probably keep the pinging and popping noises to a minimum. Also, the driver body should not come off so easily. Like I said, they aren’t bad wheels, they just didn’t “wow” me in any one particular area.

At the $700 price point, there’s no shortage of competition for complete wheelsets. If you’re savvy and mechanically-inclined, you could even put together a custom, hand-built set with wider rims and a lighter weight. SRAM is not a company to rest on its laurels, though, so I suspect they already have some improved wheels in the pipe.

Thanks to SRAM for providing the RAIL 40 wheels for review.

I actually went back to zoom in on your pics to make sure you were in fact testing the Rails and not the other two SRAM wheels… Rise or Roam or whatever. 24 spokes?! I mean it def wasn’t a surprise you tweeked them a little, but I am surprised a man of your stature didn’t completely taco. That said, I used to run some SRAM Rise and really really liked them in Wisconsin until I totally obliterated the rear hub JRA.

Yeah, like I said it makes me think the rims are ridiculously stout on their own. Like Mavic 823 beefy.