Durango Bike Company is a small mountain bike brand that was recently founded in Durango, Colorado. While the company might be new the man behind it, Jeff Estes, has been working in the mountain bike industry for decades. The bikes from Durango Bike Company, all handmade in Colorado, are making a big impression regionally in the Rocky Mountains, and are beginning to filter out across the rest of the nation as well. 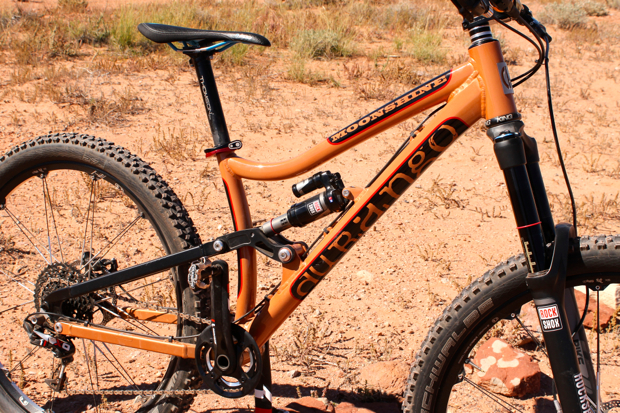 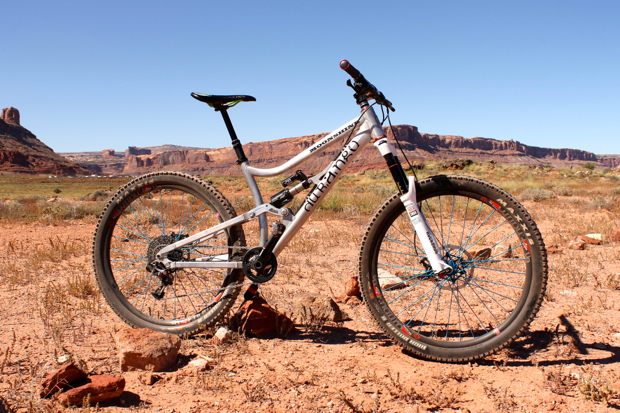 At Outerbike 2014 I had the chance to demo the Moonshine 650b, which sports 6.5 inches of travel and a 67-degree head tube angle. I spent some time chatting with Jeff about the bike, and he gave me a detailed rundown on the Moonshine’s history and development.

Jeff Estes: “I’ve been in the industry for over 20 years working for a lot of different companies over the years, and what I realized is that I think aluminum is the best material to use for longevity. Our tubing is custom drawn in the US from Alcoa. We don’t attach anything to the top tube and we don’t attach anything to the seat tube so it gives a lower center of gravity, and it lessens the weight on the upper end of the bike, so everything is really down low. We also worked really hard to make sure that the bike is completely balanced, so you’re not too much in the rear and not too much in the front. Tight chainstays, slack head tube angle, six and a half inches of travel, but designed around two inches of sag, so effective travel you’re only getting about four and a half inches. So it’s definitely a trail bike, but in the enduro scene right now we’ve been doing really well on it and we’ve had a lot of racers actually really love it for enduro, because it pedals so efficiently climbing, but it’s so smooth and [has] such a low center of gravity on the downhill.

“A couple of the other things that we did to lighten the bike–it’s actually three quarters of a pound lighter than the carbon fiber Bronson–but it’s aluminum with a lifetime warranty on it, which is cool. If you look at the chainstays and the brake stays on it, these three are 34% thinner walled than the [brake side chainstay]. The reason is it lightens up the rear end, but the brake side chain stay is where 90% of bikes break when they break, because braking forces are so extreme nowadays. With disc brakes, it wants to pull the rear end that direction. So we beefened that tube up. 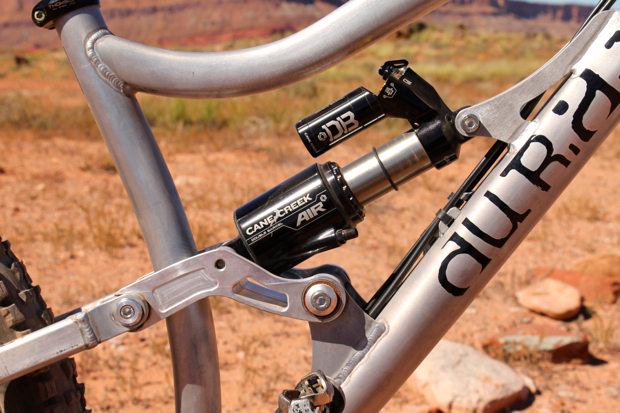 “We only give three options on the bike, and that is dropper post or no dropper post, the rear shock option–the stock rear shock is going to be the Monarch Plus from RockShox, the upgrade is going to be the Cane Creek DBair–but it’s a half-pound heavier. If you’re a hucker, or if you do big drops, things like that, then that’s the shock that you want. If you’re more of a cross country or a trail rider, then you can go with. . .the new DB Inline [for the upgrade], which is a half pound lighter. . .and then wheel options. So our stock wheels for $5,495. . .[are] the Crank Brothers Iodine 3s. For 400 bucks more you get the Industry 9 Torch Enduros. And the Torch Enduros, hands down, [are the] best wheels made right now. . . .Most hubs on the market have 36 points of engagement, have three pawls, and engage every ten degrees. That’s probably 90% of the hubs out there. That’s what XTRs do. . . .Chris Kings have 64 points of engagement, and they engage every 6.9 degree. Industry Nines, the Torch Enduros here. . .have 120 points of engagement, 6 pawls and they engage every three degrees. So they’re hands down the best on the market right now, bullet proof, and super lightweight. 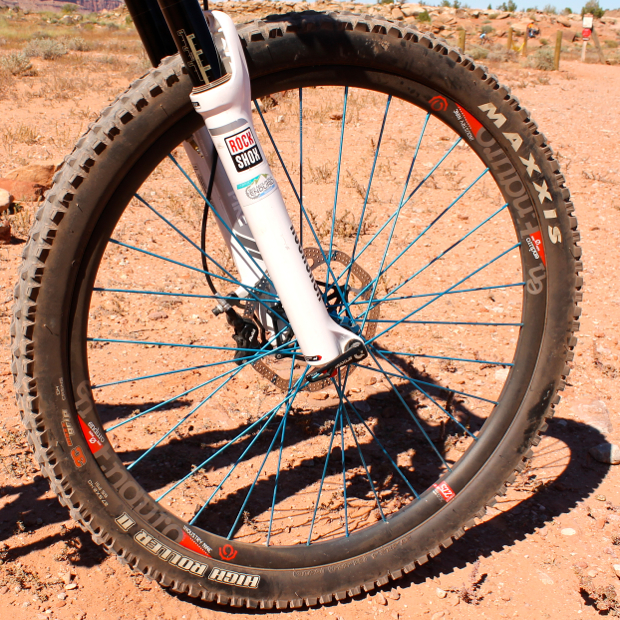 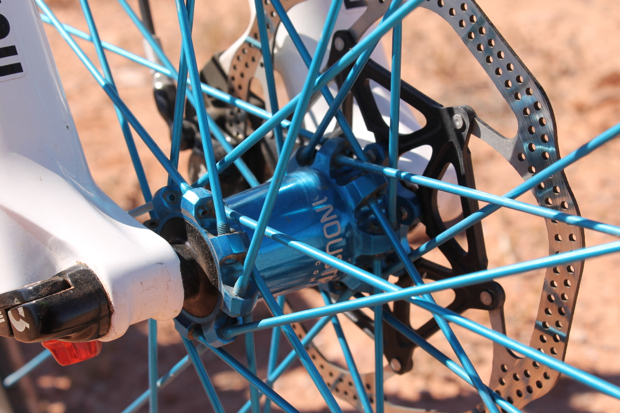 “. . .We do enduro bearings on all of our bikes. We also have brass inserts in between every bearing. . . .Most companies have aluminum on steel. When aluminum rubs against steel not only does it heat up, but it starts to wallow out after a period of time. That’s when you get a lot of play and a lot of slop in the rear end of a bike, when it’s just starting to wear. Brass is softer than the two. Brass doesn’t make any sounds when it starts to wear, so you don’t get a sloppy-sounding bike or even a sloppy-feeling bike laterally in the rear even when it starts to wear a little bit. Also, brass is really inexpensive. So to replace all of the brass inserts on this bike is only twenty two bucks, and you only have to do it every two years. And that’s if you ride four days a week. So just a little bit of thought like that that goes into it after being in the industry for so long that makes a big difference in how the bike holds up over the long term, and in how it rides now. . . .

“We’re using a modified four-bar linkage design. The reason we’re doing that is because you don’t get any chain growth whatsoever and you don’t get any brake jack. Most designs, especially if you don’t have a pivot back here or if you’re like a Kona and you have a pivot up here, the chain is trying to align itself with where the pivot is on a regular basis. If there’s no pivot at all, then when your suspension is activated your chain gets longer or shorter, which in turn makes it very difficult to shift when it’s under load. If you notice that you have to back pedal or let off your pedal stroke when you go to shift most bikes, and on this bike you don’t have any problem doing that whatsoever. You can shift anytime you want to. 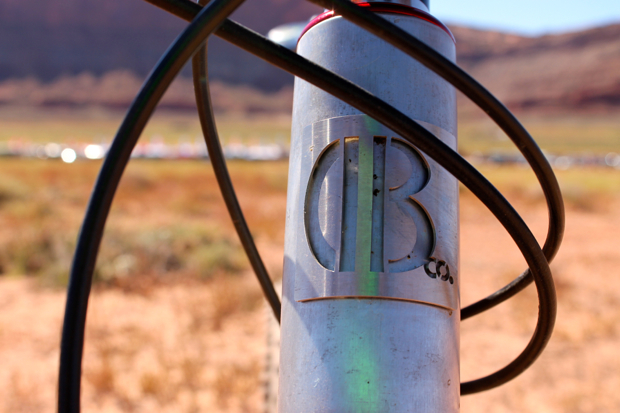 Greg: So is this all your own suspension design then? Or did you have to license out any patents?

Jeff: “We didn’t have to license out any patents or anything like that because the Specialized FSR design patent just went up about a year ago. So it’s essentially an FSR design. But I was with Amp Research back in the day with Horst Leitner Lightner who developed the original MacPherson strut or the FSR design, and then he sold it to Specialized. I was the sales manager for Dagger mountain bikes back in the day and that’s the design that we used with Dagger, and we hand-built everything in Southern California in Anaheim. They let us use the design for about two years before Specialized gave us a cease and desist. And that’s when the patent was in effect, so I had to wait 17 years before I could start my bike company because it’s the design I wanted to use. Kinda interesting.

“But the interesting thing is if you look at any auto sport or motor sport or anything in the world that uses suspension, 99% of it is a four-bar linkage of some sort, whether it’s a Formula One race car, whether it’s a trophy truck, regardless of what it is. You don’t find any of the other suspension designs that you find in the bicycle industry on anything else other than the bicycle industry. And in my opinion if it was THAT fantastic, other companies would want to use it for other things. And you can’t find it in motorcycles, you can’t find it in the little radio controlled RC cars, you can’t find it in trucks or vehicles, the only thing you find in any of those things is a modified four bar linkage.” 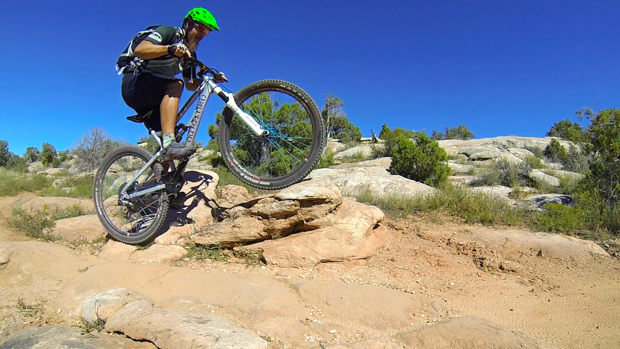 While I only got to ride the Moonshine on a short test loop at the Outerbike venue, I had a blast doing it! With a 67-degree head tube angle and 6.5 inches of travel, this is one burly bike that embodies all of the best qualities of the long-travel 27.5. Maneuverable, fun in the air, and great in the corners, the Moonshine was a true ripper!

While the ride I took it on wasn’t burly enough to truly punish the Moonshine’s suspension (just one of many reasons why long-term reviews can’t be beat), I slammed it into rocks, played around with some boulder crawling, and slalomed it deep into the berms. Two things are certain: this bike corners like it’s on rails, and it’s extremely forgiving in the gnar. 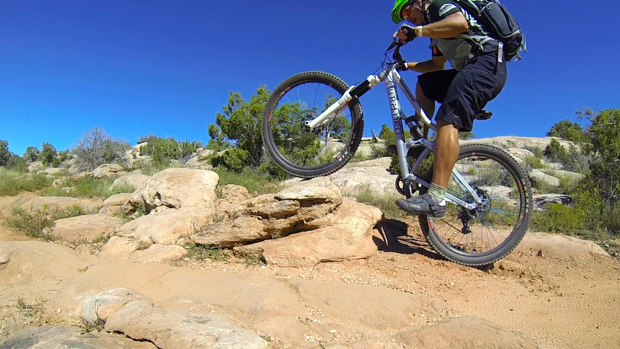 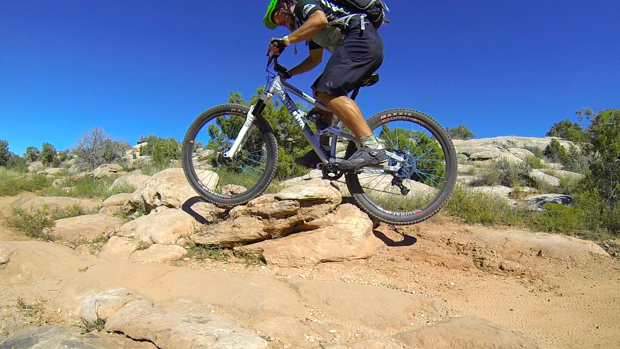 I’ve spotted the Moonshine at a number of the Big Mountain Enduro races, and while I have no doubt it’s a great race bike, the word I came away with after my test ride was “playful.” The geometry and component spec on this bike is fun and great for playing around, and inspired me to shirk top speed and instead seek out all the side hits, hip jumps, and ledge drops–even if they weren’t the fastest line.

Bottom line: if you’re looking for a great-handling 27.5 full suspension enduro rig that’s handmade right here in the US of A, but at a price point that can compete with outsourced made-in-China frames, you’re going to have a tough time finding a bike that can fit the bill better than the Durango Bike Company Moonshine.