Its not often that I put on a pair of glasses and think wow. In fact, I dont think its ever happened before, and Im a guy who tends to spend a lot on fancy-pantsy eyewear. I have a pair for running, a pair for road rides, a pair for mountain rides, and two pairs for just walking around looking mysterious.

In short, sunglasses, to me, are a lot like bikes. You need one for each type of activity you intend to pursue, plus at least one for getting around town.

I was pretty sure I had my eyewear game dialed when I put the Tifosi Podiums on my face, but I was wrong. Like velociraptors, drawing me into the jungle and then attacking me stealthily from the side, the Podiums caught me by surprise. Clever girl!

Check out the Podiums, modeled below by my helpful assistant Etsy Bender. 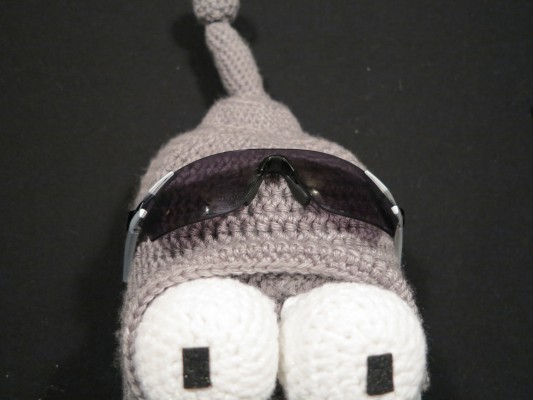 Now turn to the side, please, Etsy Bender. And cough. Thank you. 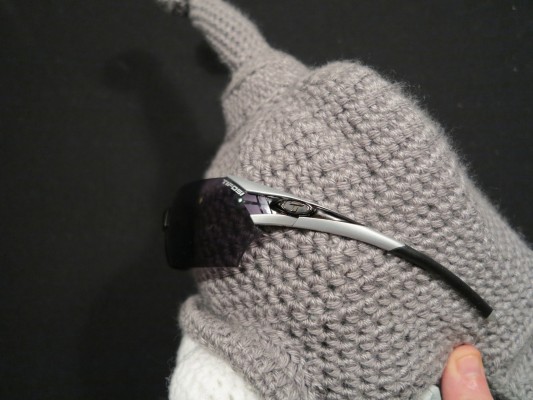 The first thing I noticed was the unobstructed field of view the Podiums offer. The frames attach to the lenses on either side, but they attach far enough out of the way that they dont obstruct corner-of-the-eye sight lines. This is something Id very much liked to have had when I was still racing. Now that Im just a fat sack on a bike, well, I still think its pretty awesome.

On road rides Im currently wearing the Oakley Jawbone, which is world famous for being the very fastest sunglasses money can buy. Why else would so many riders in the pro peloton use them? I also have them in white, which is the fastest road color. Cool and fast as the Jawbones are, they have somewhat thick frame pieces, which make it a little harder to look quickly over my shoulder to see who is about to embarrass me on a climb. The Podiums, on the other hand, give me an unobstructed view of my oncoming shame. 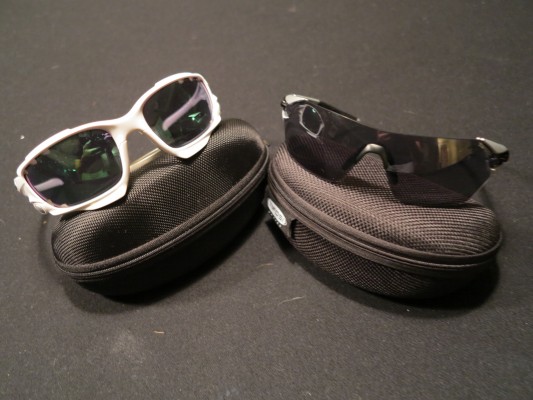 On mountain rides, I dont care nearly as much about being able to look behind me. The most important feature I need from eyewear on a mountain ride is keeping sticks from poking out my eyeballs. I also need them to not be too annoying in the process. Im currently wearing a pair of Smith Buzzsaws that I got something like ten years ago. Theyre great, but they do tend to fog up when the going gets hot and Im sweating like a hungover mule on fair day. Speaking of which, who is getting these mules drunk? Not cool, guys. Hilarious, but not cool.

I have yet to have the Podiums fog up on me. Ive taken them on runs as well as rideseven one ride home when I was caught out in the rain and had to pedal for over an hour in a downpourand they were clear as could be. Im no aerodynamicist, but I think they might get a little bit better air circulation because of the way the lens stands out away from my handsome, rugged face, thus helping to stave off the dreaded lens fog.

The Podiums come with three lenses: grey, salmon-colored, and clear. They also include a combination storage bag and lens wiping cloth, and everything fits inside a zip-up case. Theres even a soft holder for the spare lenses that velcros into the case. Check it out. 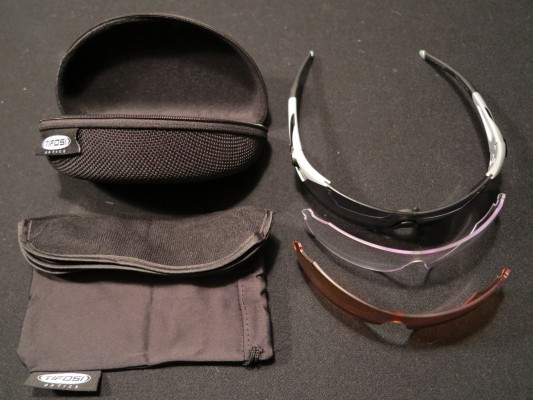 Exchanging the lenses was a little scary the first time, because youre basically making the exact movements that a person would make if they wished to churlishly break a pair of sunglasses. I am no churl, so I checked the included instructions a couple of times to make sure I had it right. Once I got used to it, though, it was easy. Just snap off the temple pieces, clip on the little thingy that rests on your shnoz, and off you go.

The only drawback I can think of, and this is admittedly minuscule, is that the styling of the Podiums does bring to mind a certain guy named Bret, if I may borrow an example from my favorite quasi-professional bike blogger from the New Amsterdam region. Lets face it, though. Im a guy who has no compunctions whatsoever about shoveling his love handles into garishly-colored skin-tight clothing and galavanting about the countryside on any manner of two-wheeled contraptions, so what do I know about fashion? Zip, thats what.

What I do know is that Ive spent way too much on eyewear, because these Podiums cost a hell of a lot less than any of the other sunglasses Ive been perching on my beak. I found the model I have for around $80 out on the wild Internet, and my Jawbones cost more than double that figure.

So, if youre looking for comfortable sunglasses that let you see in a lot of directions, dont fog up, come with a sweet case and accessories, and even cost half as much as some pricier models, grab yourself a pair of the Tifosi Podium. And if you want to buy the pile of sunglasses that I was wearing before I got the Podiums, we can talk about that too.

Thanks for Tifosi for sending the Podium sunglasses for review.

Great read and a nice assessment of these glasses. I’m testing a similar pair and I totally had the same feeling when swapping out the lenses–it seems like something is about to break. I guess it just goes to show how strong the lenses actually are.

As you said, the styling is a little dorky (I call it overly-sporty) but it’s tough to argue with performance.

“They’re great, but they do tend to fog up when the going gets hot and I’m sweating like a hungover mule on fair day. Speaking of which, who is getting these mules drunk? Not cool, guys. Hilarious, but not cool.”

Just a small note: I’ve since done a night ride in these glasses, with the clear lenses in and they did fog up a little whenever I stopped, but it was nowhere near as bad as my old ones.

The jawbones might be the fastest, but they doped…

I have a pair of Uvex that I really like, but they tend to fog up on slow, sweaty climbs. I might need to check out some of these for cyclocross.

LOL I’ll give em a look. I’ve been thinking I need some purpose built shades/clears. my fishing glasses just don’t cut it if it’s humid or the trees are thick, and schlepping along the home Depot clears is a pain to. And keep the mules on the water wagon, they’ll still sweat just fine.

I have a pair of Tifosis, too, but they’re another model. The ones I use have two interchangable lenses rather than just one. They also sport little vents in the corners of the lenses that really do allow more air to circulate behind them, thus reducing fog-up. They aren’t fog proof, by any means, but thet are certainly more resistant to it than they would be without the vents. They tend to fog up mostly on slow, uphill climbs, but they clear up almost immediately as soon as I start moving faster on the downhill side. My experience with riding glasses has been that the way they sit on your face has more bearing on the frequency and intensity of fog-up than does the particular brand/model. That is to say, that a model that works well for one person because it sits a little further from the face, for example, might not work very well for another upon whose face they fit a little tighter. The paradox for me is that I like glasses that ride close to my face and wrap around the sides some. The vented Tifosis are hands down the best compromise I have found in terms of the fit I like and a reduced tendency to fog. The fact that they came with three sets of lenses for differing light conditions just adds icing to the cake. I paid $73.00 for mine at a local shop.

I don’t know who Bret is, but I think that’s a good thing…