Normally, the only sounds fellow riders hear from me are natural ones, like wheezing, swear words I learned from a stevedore, and the occasional crying brought on by the shame of sucking so badly at bikes. But now that I’ve gotten my hands on the JBL Clip bluetooth speaker, I have the option of playing music to cover the sounds of my suffering.

The only question now is what music to play. Me, I’m a pop music fan. My favorite is the collected works of one miss Katy Perry, although I also enjoy Taylor the Swift and even K€sha.

On a recent ride with my buddy Jeff, I busted out the JBL Clip and queued up my customary pop songstresses. Jeff made a sour face. I asked him what could possibly be wrong, but his answer was unintelligible. I figured out I couldn’t hear him because I had Katy Perry’s “Teenage Dream” cranked up to maximum, though. The Clip gets really loud.

Once I turned Katy down a bit via the convenient buttons on the side of the Clip, Jeff repeated that the only acceptable trail music is reggae.

“When people hear you playing reggae, they think, ‘There goes a really cool guy,'” he said.

I pointed out that Katy Perry doesn’t have any reggae songs. Duh, Jeff. He just blinked at me and then rode away. Score one for us, Katy.

It raises an interesting question, though. Is there a universally accepted trail music, and if so, why is it Katy Perry?

Gettin’ Clippy With it 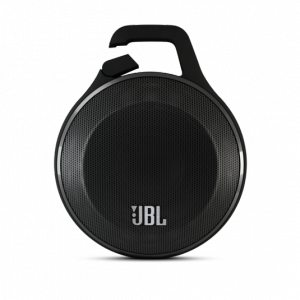 Music choice aside, anyone who wishes for an easy way to listen to some tunes on the ride has a great option in the JBL Clip. As the name implies, it has an integrated carabinerish clip that makes it pretty easy to snap onto a hydration pack strap.

The JBL Clip also functions as a bluetooth headset. It has a microphone in it, which means you can answer calls and talk to people with it. Personally I don’t even like using my phone to talk on the phone. Send me an email or keep it to yourself, I say. Except for my immediate family, of course. From them I accept messages via carrier pigeon.

The Era of User Error

My one complaint about the JBL Clip was that it had no button to stop/start playing music, but I realized that this button is missing because of something called “user error.” I read the instructions and discovered that pressing the button with the phone picture on it will pause/play in addition to picking up/hanging up calls. My bad, JBL, but in my defense, one doesn’t normally look at a picture of a phone and go “Yes, this will pause music.”

But that wasn’t the only case of user error. When Jeff and I returned to my vehicle, the Road Pig, I discovered that the JBL Clip had fallen off the hydration pack strap where I’d last seen it. Jeff asked why I hadn’t noticed that the music had stopped, but I’d gotten scratched by some briars along the ride and had been complaining even louder than usual.

I wanted the Clip back pretty bad, but I didn’t want to be the one to go back down the trail to look for it, so I faked a butt muscle cramp. Jeff rolled his eyes, but he went to look for it anyway. Thankfully, he found it. Jeff’s a cool guy. Too bad he doesn’t like Katy Perry more.

Short story convoluted, I like the JBL Clip a lot. It’s louder than you might think it would be given its small size, at 107mm tall, but it’s also pretty light at 150g. If you like to listen to music on your ride, it is a pretty neat alternative to earbuds at $49.95.

Go get a JBL Clip, queue up some Katy Perry, hop on your bike, and rock out with your cogs out.

Thanks to JBL for providing the Clip for review.

This is a really nice speaker. I should’ve called finders keepers before retrieving it from the woods.

No way buddy. This is mine.