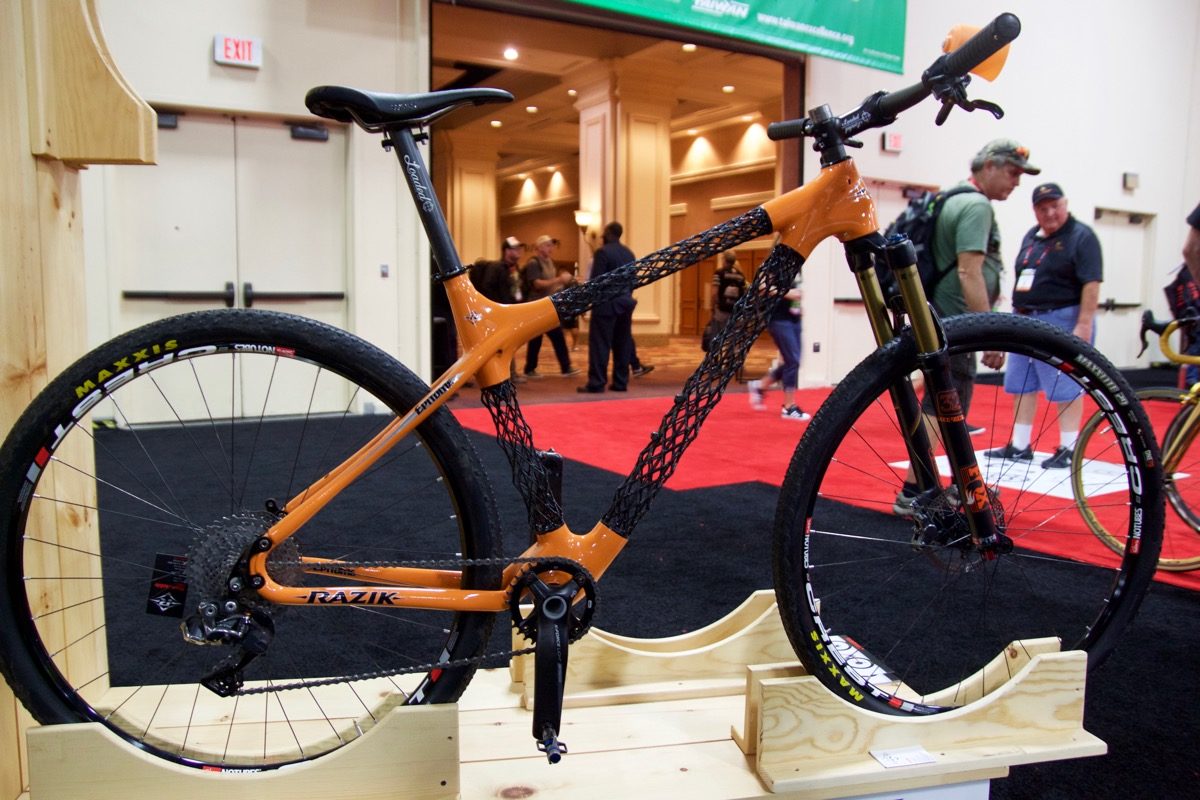 The all new Razik Epitome is a carbon hardtail mountain bike that utilizes a unique carbon Isotruss framework in place of traditional top, down, and seat tubes. The company claims this not only makes the bike lightweight but also strong. So strong, in fact, that Razik doesn’t even set a recommended rider weight limit for the bike.

This isn’t the first carbon Isotruss mountain bike we’ve seen. In fact, a company called Delta 7–the former rights holder of the design–was showing a mountain bike called the Arantix as far back as 2008. 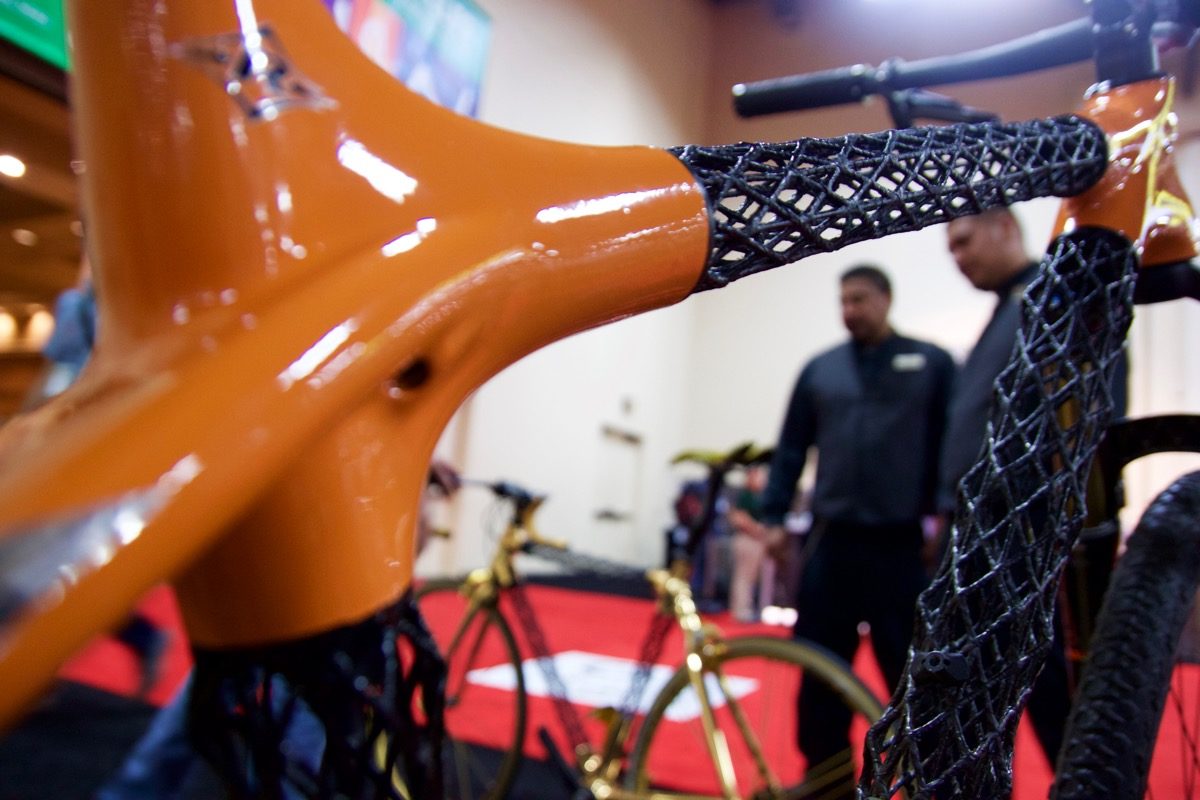 I got to take a close look at the Epitome last week and I noticed a couple interesting things. For starters, this bike has ports for internal cable routing which, in theory, gives bikes a cleaner look. The bike on display didn’t actually have any cables hooked up but one can only imagine that the internally routed cables will be visible inside the Isotruss. On the upside, this should limit the amount of cable fishing involved in installing new cables. To be fair, Razik says the bike only features “semi-internal cable routing.” 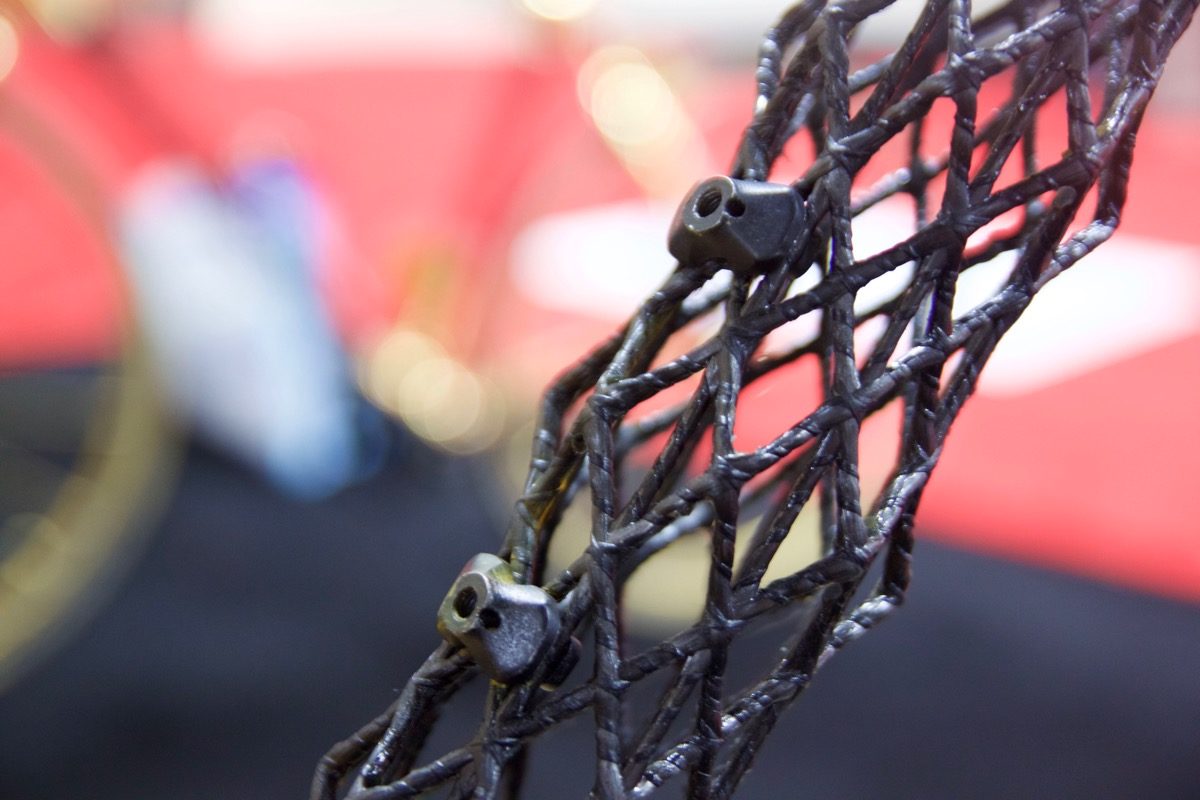 Razik did manage to place a set of bottle cage mounts on the frame, but honestly the placement looks very strange. I imagine getting these spaced and aligned correctly is a challenge when the frame “tubing” is seemingly so irregular.

Looking beyond the carbon Isotruss, the Epitome features attractive, swooping chainstays and interchangeable dropouts that allow the bike to run either 27.5 or 29er wheels. Razik also touts a “controlled flex tail” and “vibration damping” which both sound promising, especially if either eliminates some of the usual harshness one would expect from a full carbon hardtail.

Now, for those who are interested in snagging one of these unique rigs for themselves, the price may be a bit of a letdown: $4,599 for the frame only, making it possibly the most expensive hardtail MTB frame on the market.

What do you think about the look of the Razik Epitome?

Well, how much does it weigh? If there is not significant weight savings what would be the point?

There is not any significant weight savings over other high-end carbon fiber bikes (weighs about 8.8 kg). The design may look cool, but in reality it’s not a major improvement over existing tech.
source: http://www.singletracks.com/blog/mtb-videos/watch-the-lightest-mountain-bikes-at-interbike-2016/

It does look cool and unusual. But I wonder how much extra weight it will gain during muddy ride?

That would be a real mess after the first mud hole.