In case you hadn’t noticed, mountain bike tires are getting wider (some say fatter, but I think that’s rude) and tubeless-ready designs are taking over. Check out the latest tires from Maxxis we previewed at Interbike last week. 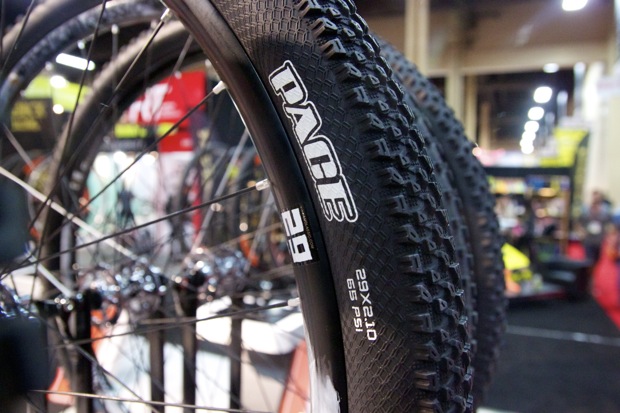 The Maxxis Pace is a new XC tire that was announced earlier this year and by the looks of it, this one is a fast roller that should work well on hardpack. The tightly spaced, smallish knobs bring to mind the Small Block 8s, but with a more aggressive bite. I love the braided sidewall detail, though I’m told it’s mostly just for looks. 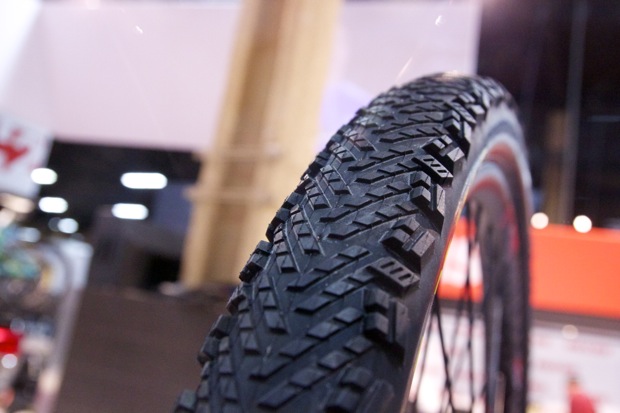 The Maxxis Tread Lite is another fast rolling, low resistance tire that’s essentially a semi-slick (though not quite). The sidewall knobs are standard height, allowing the tires to hook up in corners while the center tread gets out of the way when you want to go straight and fast. In the past I’ve been a big fan of this type of tire–maybe it’s time to give it a try again… 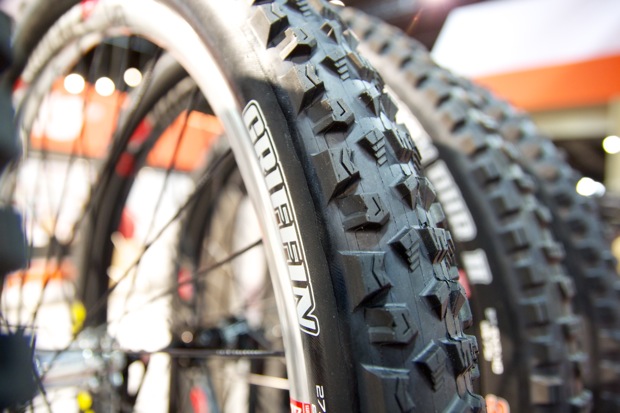 The Maxxis Griffin is a new 2.4in freeride/DH tire that’s offered in both 26 and 27.5 sizes. Just check out those stair-step knobs–these tires should be able to tear into some dirt and probably rip out the roots while they’re at it.

We also saw Maxxis fat bike and 29+ tires at the show, and it was really interesting to see just how massive a 3″ 29+ mounted tire is compared to even a 4″ fat bike tire! I got a chance to ride the Chronicles on the Chumba Ursa and honestly Maxxis nailed it with this tire. It’s a fast roller (which is what 29er riders expect) but offers the width and volume that makes the whole 29+ concept tick. 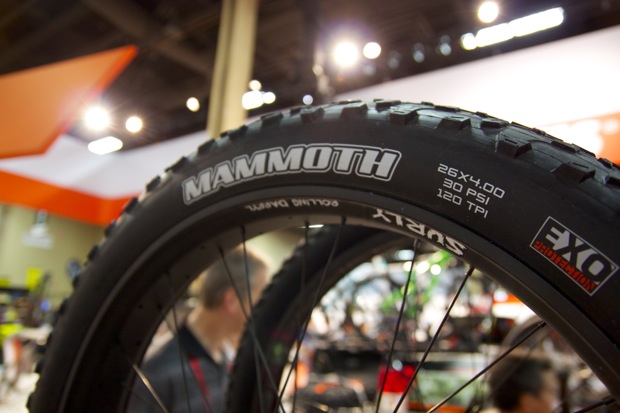 Maxxis’ fat bike tire is the Mammoth and it’s a 4″ 120 TPI tire that’s definitely gaining some traction (pun intended).  No word on whether the company will be offering a 5″ tire anytime soon but you never know–it seems like a ton of “prototype” tires have been leaking out of Maxxis this year. So far the company has been really good at responding to the market and producing the tires mountain bikers need.

One final note: Maxxis is working to make most of the mountain bike tires they offer tubeless-ready (TR). I asked why they don’t just make all tires TR (since you can run tubes in a TR tire) and was told some buyers who run tubes don’t want a TR tire. Bah! So for now we’ll keep looking for TR-versions of our favorites, though at least it should get much easier to find them.