The Mountain King is best described as an all conditions tire. Featuring an open design and an alternating pattern, this tire self-cleans while it rolls. Alternating intermediate knobs and aggressive cornering knobs work hard under braking and cornering.

Inside the tire it gets interesting. The ProTection carcass is a second generation version that is 25% lighter, 30% stronger (puncture resistant), and offers improved rolling resistance (tire deformation) over its predecessor. The complicated structure of varying the number of plies (four at the center and three along the sides) and changing the threads per inch (240 along the center and 180 again along the sides) contributes to the improved puncture resistance. 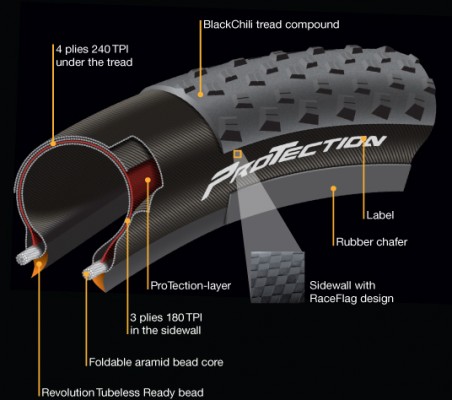 Not only is there an improvement in the overall performance of the tire, but it offers improved sealing from the added ProTection layer. Another additional feature is the Revolution tubeless-ready beads, which aid in the sealing of the tire to the rim.

Finally, the Mountain King II tires are made from Continental’s own Black Chilli rubber compound, made in Conti’s own Korbach factory. What sets this synthetic/natural rubber blend apart from other tires is the addition of nanometric carbon soot particles which essentially allow the tire to conform to the surface it is riding on.

Installing the Mountain Kings on a set of Enve M70thirty rims was a tough job (with lots of expletives used). I cannot say why, but I think it may have had to do with the rim tape that was being used at the time. I had to use a full sized air compressor to get these tires to seat. Other than that, I had little issue getting the tire to snap in place. I opted to use Continental’s own Revo Sealant, rather than Stan’s. The use of the Revo sealant ensures there will be no compatibility issues, which sometimes arise. 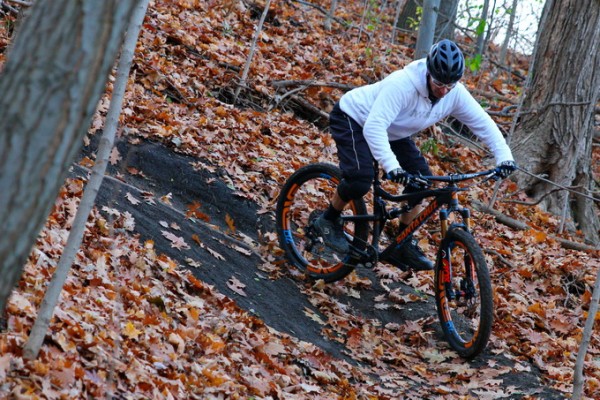 Since these were marketed as an all-conditions tire, I was keen to confirm that claim. On the website and on the back of the packaging card it does say that the tire works for Hard/Dry conditions all the way to Loose/Soft conditions, but Continental stops short at claiming they will work in mud.

Most of the summer in Toronto was fairly dry. The trails close to town have hard packed clay as a base and rocks or roots for obstacles. Out of town the trails are mostly compacted dirt, which is also heavily fortified with growth or rock. Depending on the type of ground you’re on, or when things get a bit damp, the ground acts very differently. The clay base tends to get greasy faster than mainly dirt ground, which gets slow and soft.

The Mountain King feels like a fast tire–it doesn’t feel like one of those tires that buzz underfoot. Surprisingly, they have a decently-smooth feel to them when going fast. In fact, they feel downright snappy when you get on the pedals with them.

I ran them at 28PSI with no issues, despite my fat butt. With these tires mounted on Enve M70thirties, I was very impressed when forcing them into the berms: no squirming whatsoever. The double tooth side knobs did a great job holding the tire in line.

On the rocks and roots, I can only think of Gecko-like adhesion, with no noticeable side slipping along sides of rock. This is partly due the the wider rims on the Enves but mostly due to the Black Chilli compound that does its little molecular shuffle as it hits the surface of what you’re trying to roll over.

During my review I had very little wear on these tires. Despite all the rocks and roots, I had no issues at all with side wall cuts or damage. This is something that I was keenly looking for as I had heard the older versions had these issues. Gladly I can confirm that the new tires have resolved those issues.

On the down side, slimy conditions will cause the tires to pack up with mud. But overall it’s a decent rolling tire. You may not win races with these, but for playing around in the forest and just riding your bike the way it is meant to be ridden, the Mountain Kings shine. They will last a long while and offer up good grip on most everything.

Thanks to the folks at Continental for providing these tires for review.

Gear
What is 'Too Heavy' for a Mountain Bike?
Gear
4 Mountain Bike Saddles, Reviewed for 2020 [Review]
Singletracks
Get Ready for a Bikepacking Adventure with these Gear Picks
Videos
Enduro Racing from a Photographer's Eyes [video]