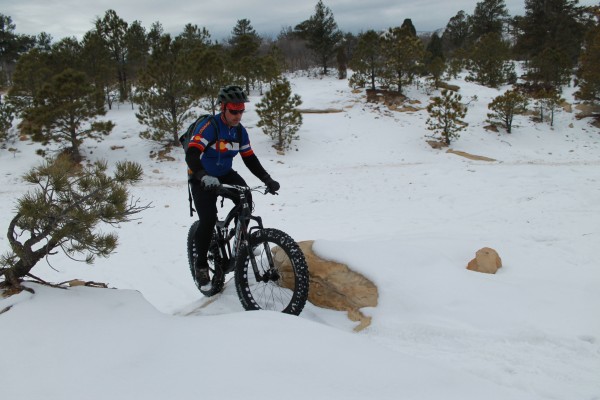 Marketing professionals would say I am not an “early adopter.”  When shaped skis replaced traditional skis, I eschewed them for the better part of a decade, opting instead to stick with my skinny sticks.  I soldiered on on a hardtail mountain bike for years after full suspension captured the mountain bike market.  I still don’t own a flat screen TV or a smart phone.  So, being the old curmudgeon I am, I was surprised to be given the opportunity to do a full review of an all-new full suspension fat bike, the Foes Mutz.  Fat bikes, although rapidly gaining popularity, are still in their youth in the marketplace, and fatties with suspension are in their infancy. For an introduction to the Mutz, check out last week’s “on review” article here.  For ride impressions, keep reading. 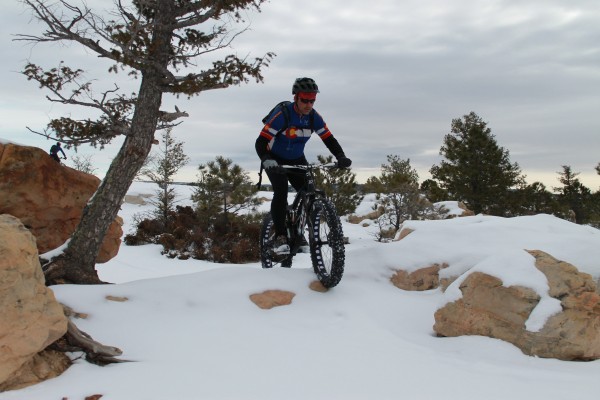 Why Ride a Fatty Fully?

Fat bikes are for riding on the snow, so why would one need any suspension, let alone 140mm of rear travel?  Three reasons:

Handling on the Mutz

Foes Racing has a rich heritage in downhill. That mindset seems to make an appearance in all their bikes, and the Mutz is no exception.  If you want to get from point A to point B on a decline, in the shortest amount of time possible, a Foes will do that for you in a no-nonsense way.  If you want to do it on a fat bike, then the Mutz is definitely your ride.

Once it gathers just a little bit of momentum, the Mutz positively lays waste to just about anything in its path.  Line selection?  Hardly relevant.  You get to pick the line, not the trail.  And even if you choose wrong, the Mutz might just still deliver you out the other side unscathed. This ability of the bike to ride true was most welcome both in the chunk and in deep snow.  While flying down The Chutes in six inches of fresh powder (as fast as I would on my bike when dry), there was some inevitable fishtailing, but just like in dry chunk, wherever I pointed the front end, it would hold the line and the back end would follow. 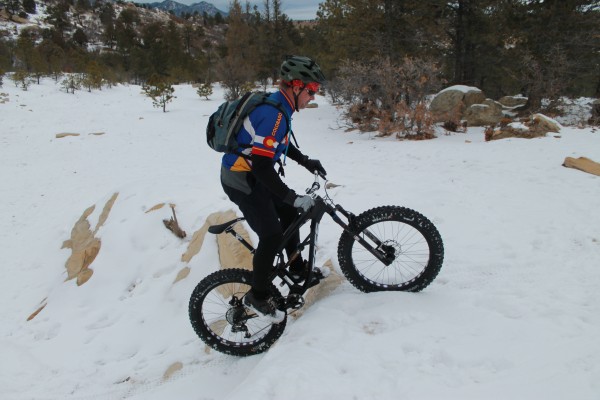 A mechanical engineer who only looks at suspension on paper, or a rider who thinks it takes some kind of fancy linkage to create a great suspension might turn his nose up at the Mutz’s relatively-simple single pivot–and that would be a mistake.  Foes’ attempt to keep it simple while still generating outstanding performance is spot on.  The suspension soaks up all manner of chunder without unduly disturbing the rider.  Which is not to say the suspension completely isolates the rider rom the trail; the Mutz gives just the right amount of positive feedback to keep the rider in tune with what’s going on under his knobbies while eliminating the negative feedback associated with single pivots, like brake jack or unwanted chain growth.

To fully utilize the suspension, one must use the CTD adjustment on the shock.  If I left the shock in descend mode during a climb, it would bob enough to notice, and the reverse is also true; if I left it in the climb mode on the descent, it would buck a bit.  But when properly adjusted, I could stand on the pedals with no noticeable loss of efficiency and on the descents, the suspension would absorb every hit and re-extend to be ready for the next one like an Olympic mogul skier. 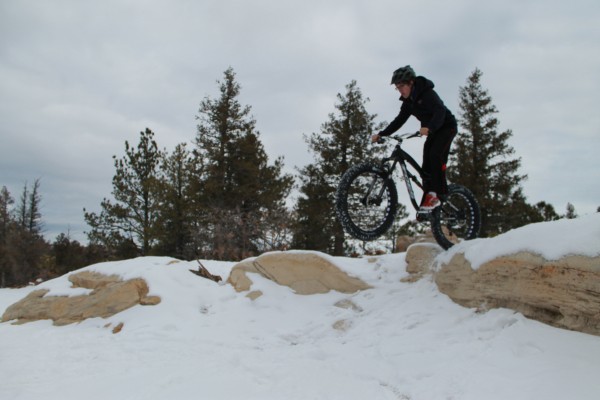 That pedaling efficiency becomes very important on the climbs since the Mutz is no flyweight, and I did feel most of its 34 pounds on long climbs, especially when pushing fresh snow.  Leg strength and endurance are your best friends when climbing.  The fat tires and suspension become your new best friends when climbing rocky, technical trails.  If you’ve got the leg strength, you can simply hammer the Mutz up and over, or even straight through any obstacle in your path.  That fat rear tire would grab and propel over many an obstacle which has given me pause, especially in snowy conditions. 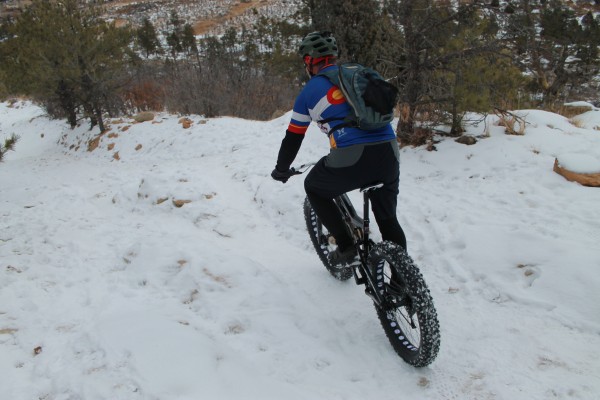 While the Mutz is perfectly suited to a bull-in-a-china-shop rider, it was also highly maneuverable.  Tight, v-shaped switchbacks were no-brainers, especially going down.  I was afraid, given Foes’ history and predisposition toward downhill bikes and my preference for long cockpits, that the Mutz would ride too short for me.  It turned out that the Mutz’s geometry was perfectly neutral and allowed me to comfortably stretch out yet still drop my butt fully behind the seat when things got steep and deep.

The one handling drawback I noted with the Mutz was that it is not the easiest wheelie-ing bike I’ve ridden.  Real effort was required to keep the front end up, which caused me some concern when hucking.  Fortunately, you can screw up a huck pretty bad and the Mutz will compensate nicely on the landing.

The component spec Timberline picked for the bike performed to perfection throughout my eight days with the Mutz.  Of particular note was the completely reliable and seamless shifting offered by the Oneup 42-tooth cog mated to the SRAM 1×9 drivetrain for a far-ranging 1×10 setup. That true granny cog was a welcome addition given the Mutz’s weight and the grade of some of the hills I was snowplowing up.  If I hadn’t known it was a conversion, I would have assumed it was a full 1×10 straight out of the box.  The wide handlebars added to the confidence-inspiring handling of the Mutz, and the Surly wheelset rolled fast and free.

The most impressive individual component was the set of 45North tires.  These had fantastic traction on every surface including icy, hard-packed snow and fresh powder.  These tires were the one upgrade from the base build on my test sled, but I would almost consider them a necessity to be able to fully push this bike through its performance envelope.  The one component disappointment I had was the seatpost. It didn’t drop. This bike positively screams dropper post.  Along with the tires, that is the other upgrade I would recommend.

So who doesn’t want this bike?

Despite the weight (which is still comparable to other similarly spec’d fatty fullies), I would have no qualms taking this bike out on just about any ride.  But if you’re a gram counter, this will definitely be overkill.  Also, if you’re buying a fat bike strictly for winter riding and spend winter time riding fire roads and groomed XC ski or snowmobile trails, you’re still better off with a standard fully rigid fat bike.  For everyone else, though, this bike is likely to join the corners of your mouth to your ears.

For a great video of pro riders putting the Mutz through its paces, click here.

Gear
We Are One Arrival All-Mountain Bike in for Test
Community
Thanks for Reading Singletracks
Progression
Why Different Bikes Call for Different Saddle Angles, Shapes, and...
Gear
Epic Memorial Day MTB Deals Up to 50% Off
Subscribe
Login
Please login to comment
1 Comment
Most Voted
Newest Oldest
Inline Feedbacks
View all comments