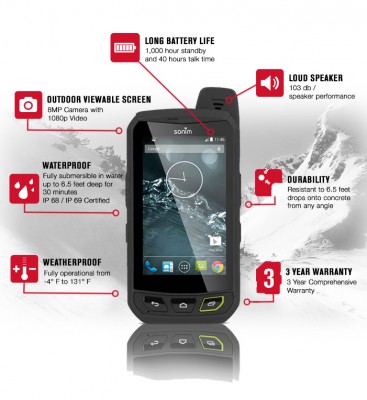 Having a phone on a ride is nice. If you have the right apps and you haven’t smashed it to bits yet, your phone can serve as a GPS-enabled HR monitor, wayfinder, and, if you’re that kind of person, even a jukebox. 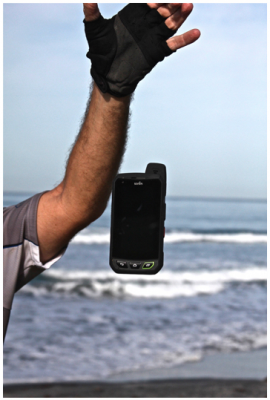 (Please spare me your vitriolic emails about how no one should ever listen to music on a ride. For me to care any less would require surgery or massive amounts of sedatives. Possibly even the former to implant the latter.)

But the reality of mountain riding is that it occasionally includes what I like to call an Off Bike Event, which in my case usually means my speed has exceeded my ability. I’ve been lucky so far. I’ve only smashed myself up on rides; never my phone.

Sonim hopes to end phone smashing altogether with their XP7, though, a totally unlocked Android phone. They say this thing is so tough that even the hairy gentleman pictured at right can drop one at the beach, pick it up, and then take a hairy selfie at the beach.

True, we’ve seen rugged phone protection solutions before, but the XP7 integrates a big battery and a larger, louder speaker which you can use to irritate mountain bike purists who will then get all tough about it in your Facebook comments.

If the idea of a super rugged phone with a big speaker and long battery life gets your crank a-spinning, or the idea of supporting phone innovation is interesting to you, why not check out Sonim’s XP7 Indiegogo campaign here? Phones will run you $579.

It has a couple of weeks left yet in the funding campaign as of this writing, but it’s pretty close to being fully funded so it’ll probably go.

We have “flexible funding” set up. Essentially what that means is that we will be delivering the phones and any “perk” purchases no matter what – whether the campaign gets fully funded or not, customers can be 100% confident that they will get what they order.
Again, Sonim is an established company and the phones are already produced (we’re not gathering funding for production like a lot of entrepreneurs and start-ups that use crowd funding, we’re using Indiegogo in a slightly nontraditional way).
Also, . . . there is a $250 down option if they didn’t want to front the whole $579 right now.