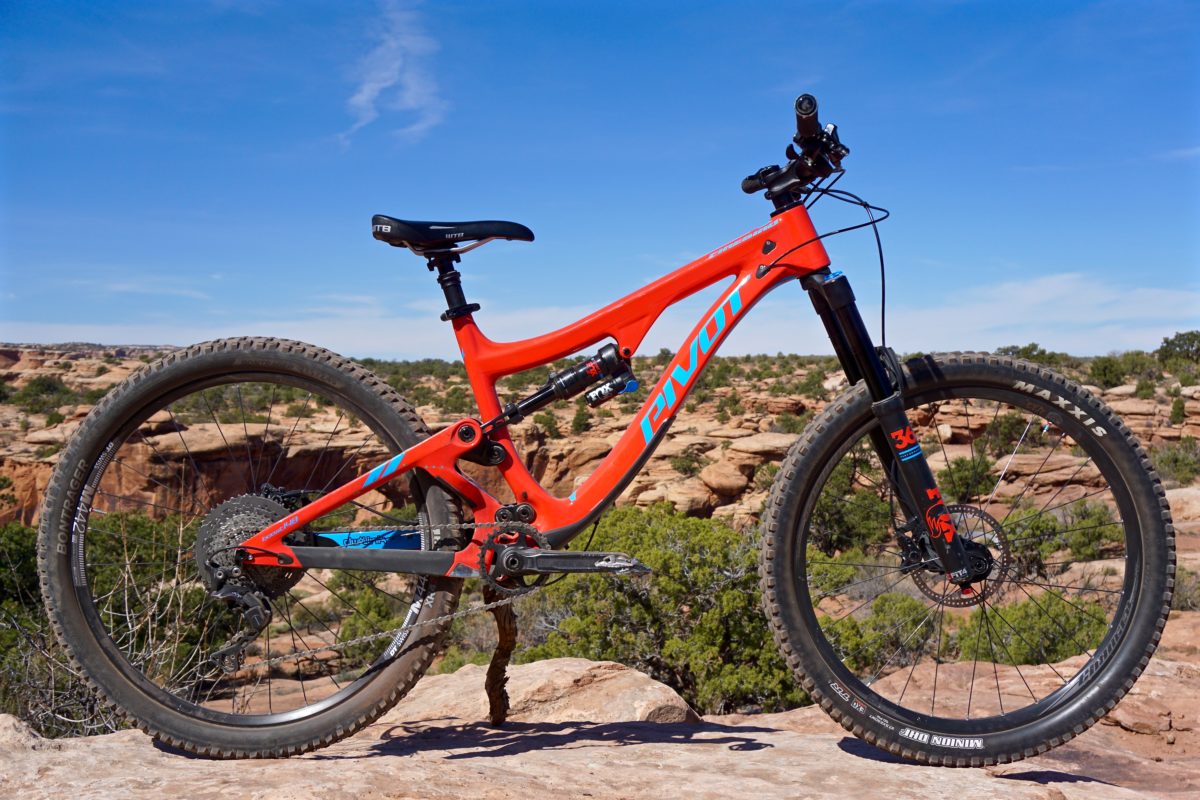 The Pivot Mach 6 was once praised as one of the most versatile bikes of its class and helped usher in the Enduro Era. The Pivot Phoenix DH is, well… a pure downhill machine. A clear division between the all-mountain and downhill categories is usually enough for most bike companies to get along. However, Pivot completely smears that line with the 170mm-travel, EWS thoroughbred, revised Firebird (here’s what the Firebird used to be).

First, a shout-out to some friends that made this review possible…

Moab eats bikes. It’s a boneyard for chains and an inner tube’s worst nightmare. Moab is where knobby tires go to die and an extra rear derailleur hanger is the cost of entry. And for that, we thank shops like Poison Spider Bicycles allowing riders to beat up their bikes instead of our own. 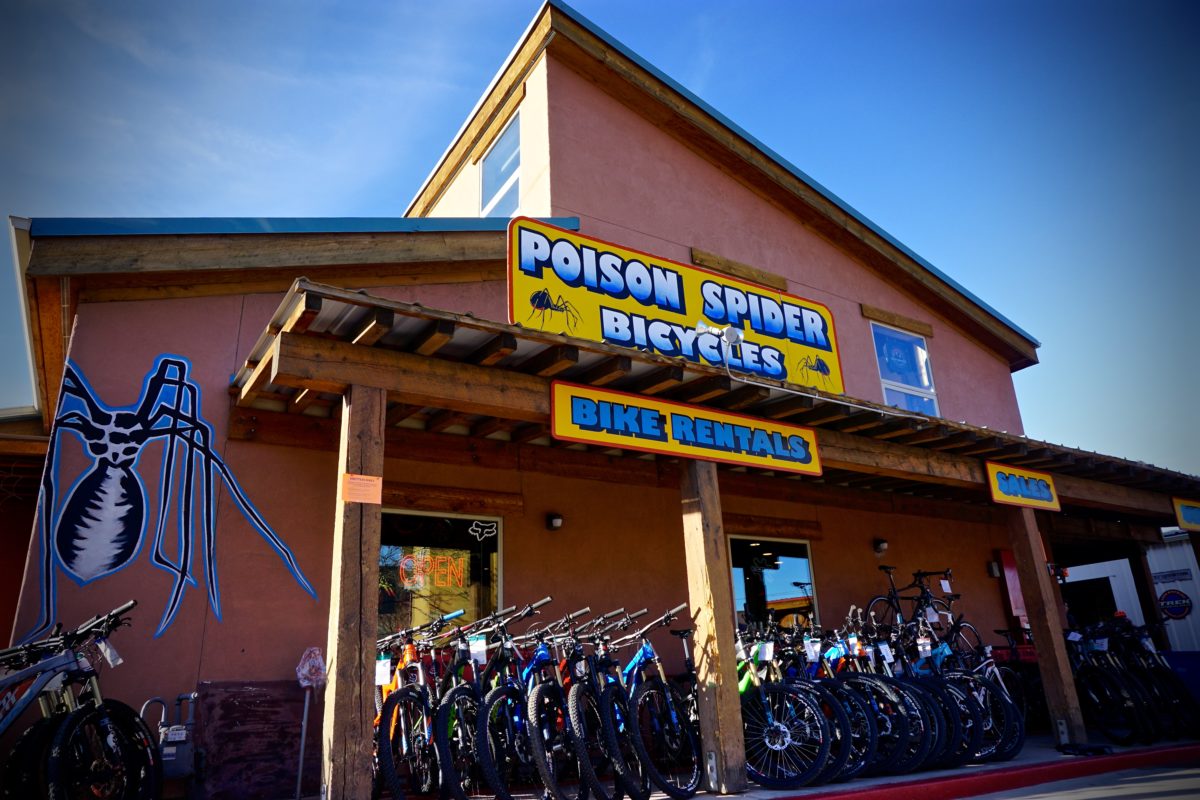 Situated on the north end of Main Street, Poison Spider may be one of the first bike shops you see when you roll into town and, given their large inventory of goods and stellar customer service, is likely the only shop you’ll need during your visit to Moab. New this year, Poison has an online shuttle reservation system allowing customers to select from a handful of drop points, pre-pay for a specific date and time, and track when shuttles are full. The online system frees up shop staff from constantly fielding phone calls so they can focus on getting more people riding sooner.

On that note, let’s talk about a bike I demoed this go-round from Poison: one Pivot Firebird.

Bottom Line: The Pivot Firebird is a downhill bike that you can pedal. 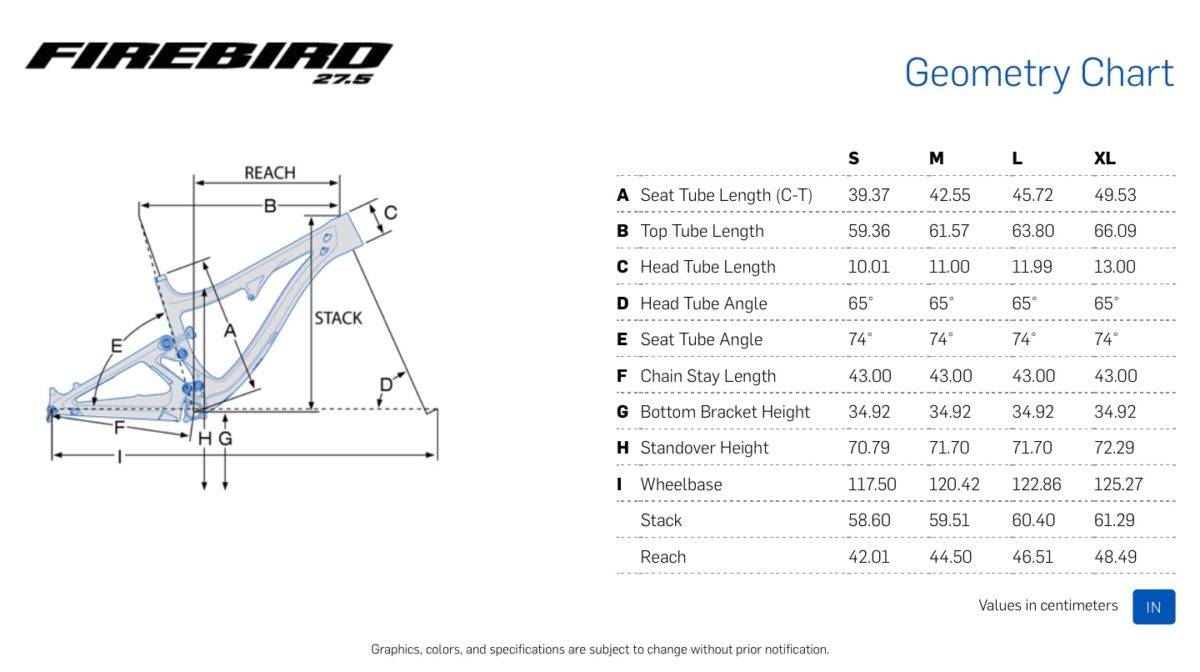 With one of the longest reach measurements (445mm, medium), a super-slack 65º head angle, low standover, and short seat tube length, there is no wondering what the Firebird was designed to do (crush descents, mow rock gardens, and not so much as flinch at drops beyond your pay scale). Yet, it’d simply be a mistake to think it’s a point-and-shoot-only bike, as the Firebird still retains a certain playfulness with its 430mm chainstays, climb-ability with a 74º seat angle, and agility from its overall design and construction. 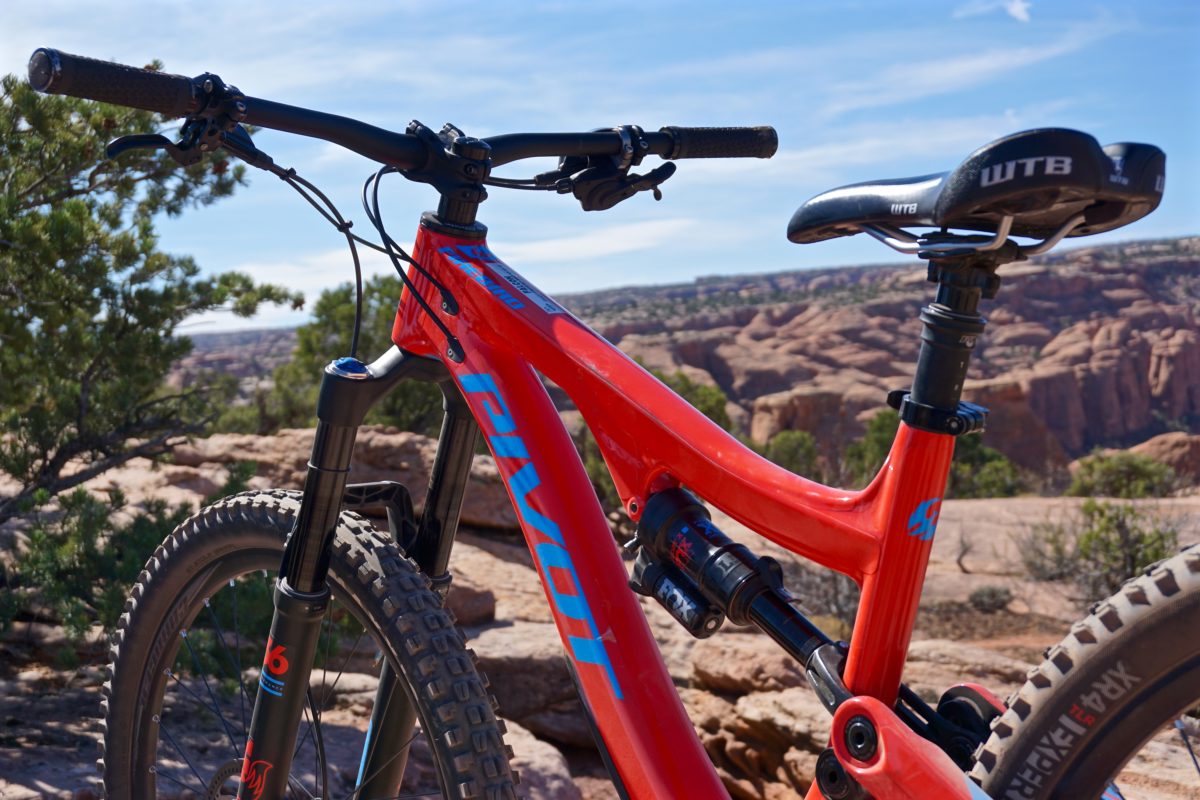 The Pivot Firebird is built on a 27.5″ wheel platform boasting 170mm of DW-Link-optimized rear wheel travel. The stock Fox 36 fork travel matches the rear at 170mm and, as if that wasn’t enough, a 180mm single crown or even larger dual crown fork also works with the Firebird’s geometry. The Firebird Team build comes with a Fox Float X2 Factory shock while Pro and Race builds have an X2 Performance and Float X, respectively. With the exception of a DT Swiss M442 wheelset and Bontrager XR4 rear tire, I demoed the Firebird Race build, and you can find more details on build options on Pivot’s website. Here’s the skinny on the not-so-skinny Pivot Firebird: 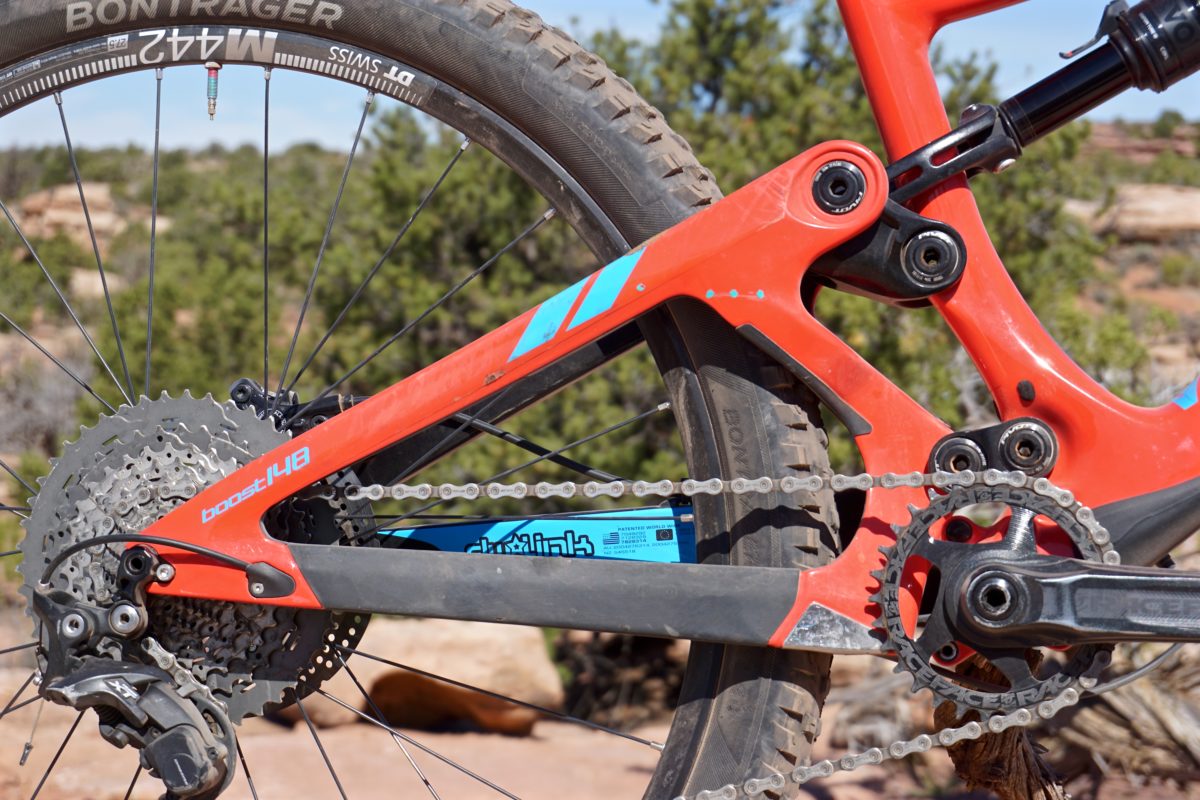 DW-Link is a four-bar mini link suspension platform highly regarded for efficient pedaling independent of shock damping. Dave Weagle and Pivot designed the Firebird’s rear axle path to move rearward during the first third of travel before moving vertically. Pivot claims this variable wheel path does well to soak up square edges, provides high anti-squat while eliminating pedal bob, and decouples suspension performance from braking and pedaling forces. Pivot also asserts that the Firebird works best with the progressiveness of the highly tunable Fox Float X2 air spring and that using a coil-over would very likely result in harsh bottoming. That said, if you are a die-hard coil fan, Pivot has trialled and approves of a custom-tuned PUSH ElevenSix.

If there’s one thing that surprises most who’ve never been to Moab before, it’s not the degree of exposure; the amount of rocky terrain; or the quantity of water, chapstick, and Advil you’ll consume in a three-day period; but that catching a shuttle to “the top” doesn’t mean you still won’t climb – A LOT! What’s more, many Moab trail climbs involve steep 4×4 trails lined with large, repeating ledges and littered with loose rock. For the most part, Mag 7 and Porcupine Rim are downhill-oriented, but I wouldn’t define these trails as “downhill,” per se. This distinction was important for me, as I had little doubt the Firebird would descend confidently, and was more interested in how it would pedal.

And the Firebird does climb. In fact, it climbs surprisingly well. After three hours and 27 miles on Mag 7 (in other words, I’m tired), we ventured out to prove the Firebird’s uphill prowess on the HyMasa Trail – a classic Moab staircase climb – to access the goods on Captain Ahab. While the Fox Float’s lever-actuated damper reliably firms up pedaling, I quickly lost interest in toggling between Open and Firm as Dave Weagle’s suspension platform practically mimics these characteristics on its own. Even on standing uphill spurts, the Firebird’s high anti-squat (160-115%) provided a supportive base for mashing, although I would suggest increasing fork damping for even better climbing performance.

The rear wheel remained glued to the ground, propelling me up and over monstrous square edges, with some limitations on absorbing bumps while pedaling (pedal kickback). This is a well-known characteristic of many designs with such high anti-squat equipped with a 1x drivetrain.

For better or worse, the Firebird is a very long bike. Its reach values range from 420 to 484mm, with sprawling wheelbase measurements of 1175mm to 1252mm. These figures have downhill stability and speed written all over them, especially in wide open, gnarly terrain like that of the Porcupine Rim trail. Two very capable riders in my group were no match for the Fox 36 raked at a 65° head angle, allowing me to easily pull away during high-speed stretches, mowing down wave after wave of jagged rock fields. The super long top tube meant I could simply squat into the bike, with less rearward shifting in order to counter the physics of an endo.

Given the Firebird’s affinity to high-speed descents, it compromises in tight and slower technical terrain. The Captain Ahab trail is one of Moab’s premier downhill runs, but requires a great deal of maneuvering at both slow and higher speeds, revealing some drawbacks to the Firebird’s long geometry and suspension. While the short, 430mm chainstays do well to maintain nimbleness through turns and facilitate lift over slow drops, the Firebird does require a bit of body english to do so.

Three rides on the Pivot Firebird is hardly cracking the book, but they were some of the fastest and fiercest that Mountain Bike Mecca has to offer. While Pivot boldly states, “the Firebird is the no-compromise, Holy Grail of long travel mountain bikes,” it’s certainly not for everyone. One look at the numbers and most experienced riders will know if the Firebird is an appropriate option.

With travel spilling over the 160mm mark and sprawling wheelbases, the Firebird can be a handful in the tight and twisty, while practically riding itself once up to speed on wide-open, technical terrain. It doesn’t climb any better (or worse) than most 150-160mm enduro bikes but will descend better, making the Firebird a deadly enduro weapon, perfect bike park companion when you don’t have room for a dedicated DH bike, and a good all-arounder so long as you have the terrain to stretch its legs.

Thank you Poison Spider Bicycles for setting me up with the Pivot Firebird!