The Trance has been a fixture in the Giant product line-up since it’s introduction in 2006. Originally it was a 4″ travel 26er, and subsequent years saw the travel grow to 5.5″ and a 29er version. Giant has kept the 5.5″ of Maestro travel, but they have settled on 27.5 as the wheel size of the future. 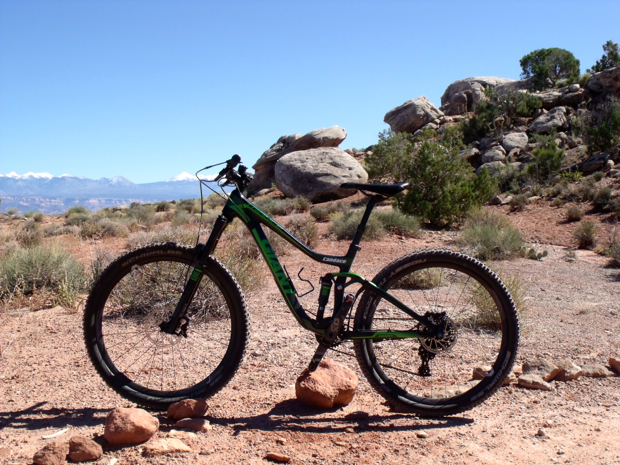 The “Advanced” designation means this model has a carbon frame, and with it comes a RockShox Revelation fork and Monarch rear shock, and SRAM XX1 drivetrain and Guide brakes. Rounding out the components are Giant-branded cockpit and wheels, also carbon, and some Schwalbe Nobby Nic tires. This complete bike will set you back $7,750.

As with all of Giant’s bikes, the Trance is well-built with no squeaks, creaks, or rattles. The shifting, brakes, and dropper post all work flawlessly, despite being abused by trade show attendees. I bring this up because it speaks to Giant’s durability.

Out on the trail, the Trance glides along the with all the finesse one would expect of a design of this maturity. It climbs well, if not quite as nimbly as the Anthem. It descends confidently, although it’s not as gravity-oriented as the Reign. What it does shine at are long rides on varied terrain with minimal fuss. On my test rides (two of them) I wasn’t wow’ed by anything, but I wasn’t annoyed, either. I actually found myself just enjoying nuances of the trail. I found rocks to play on, dug through some sand, climbed on slickrock, etc. I was also able to take in the view and converse with my daughter. I guess what I’m saying is this: if your rides tend to be less competitive and more social, then the Trance is a logical choice.

This isn’t meant to diminish the capabilities of the Trance at all. On the contrary: it’s the quiet confidence and excellent balance of this model that allow it to be such a transparent part of the ride. Think of the Trance as an average of all of Giant’s other models, and a bike that perfectly defines the “Trail” category of riding. 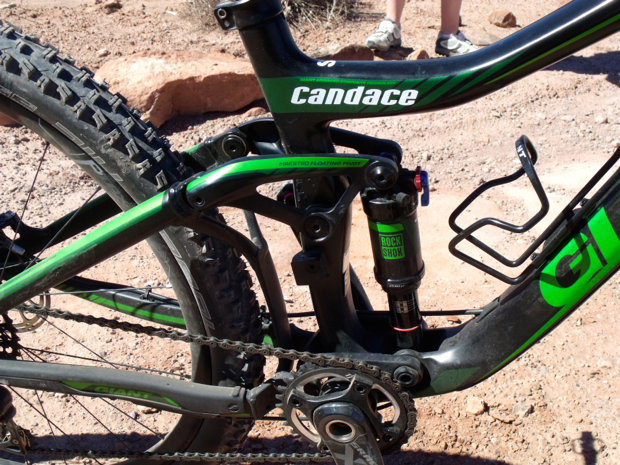 If you’re looking at bikes like the Santa Cruz 5010 or Scott Genius 700, have a look at the Trance as well. If your riding is a bit more gravity-oriented, or if you like to dabble in some enduro racing, then the Trance SX with its 140-160mm travel-adjust Pike can keep up.

There is also an alloy version that comes in three component levels that list for $2,125, $2,550, and $4,050. (If you’re a female rider and need a women’s specific fit, the LIV Intrigue features a similar design to the Trance)

Bottom Line: The Trance is a regular mountain bike for regular riders who want a quality build that will work day in and day out, for years. (By way of example, my 2006 Trance is still going strong, 8 years later!)