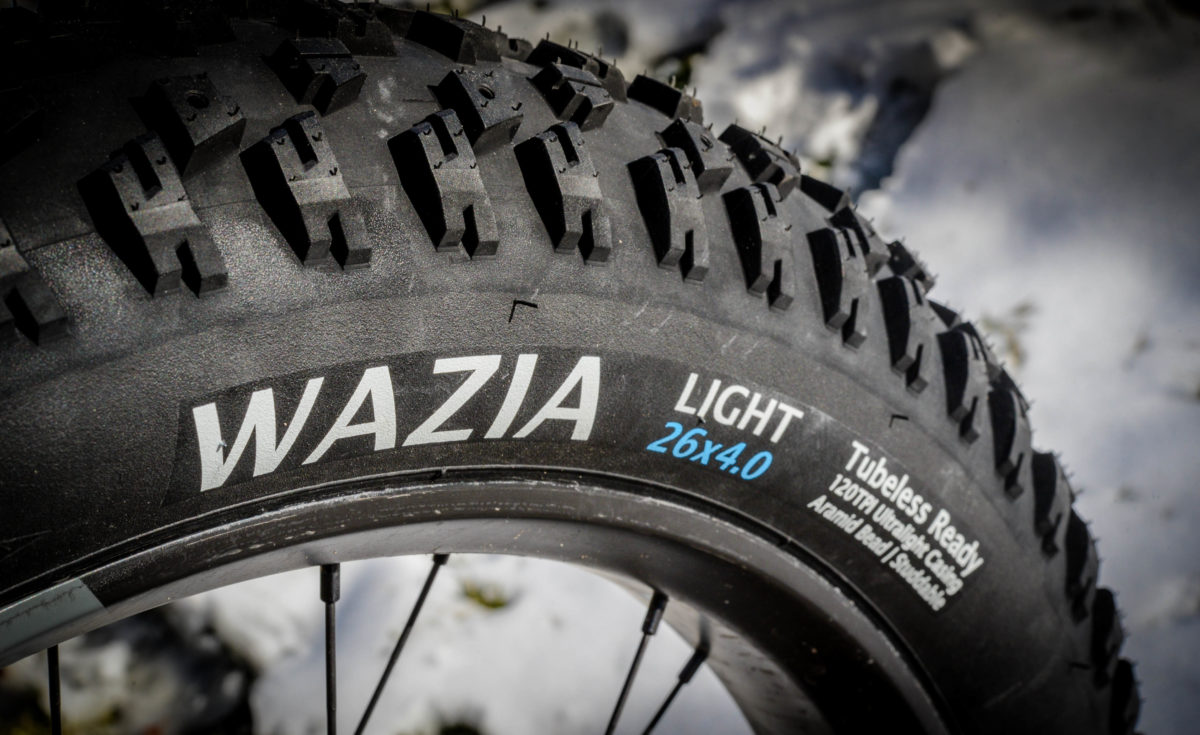 Unless you are a hardcore bike tire enthusiast, you may not be aware of this upcoming brand that has been keenly carving a niche in the world of rubber. With a focused line that is shared only by brethren models Elwood (gravel) and Chunk (dirt), the Wazia is Terrene’s concerted effort to manufacture a durable and competitive fat bike tire for snow trails and beyond.

I was sent the Wazia 4.0 Light for review, which boasts a sticky 60a compound mated to a pliable, ultralight, tubeless ready 120 TPI Aramid bead. It has a fast rolling rounded contour with studdable knobs and a fairly aggressive side profile designed around a medium-large footprint for rim widths of 60-85mm. It’s relatively light at a reported 1380g (mine actually weighed in at 1478g).

The Wazia also comes in a burlier “Tough” model with a 60TPI TekSheild casing, and both of these are also offered in a 4.6-inch width. Pre-studded versions of the “Light” are offered as well. 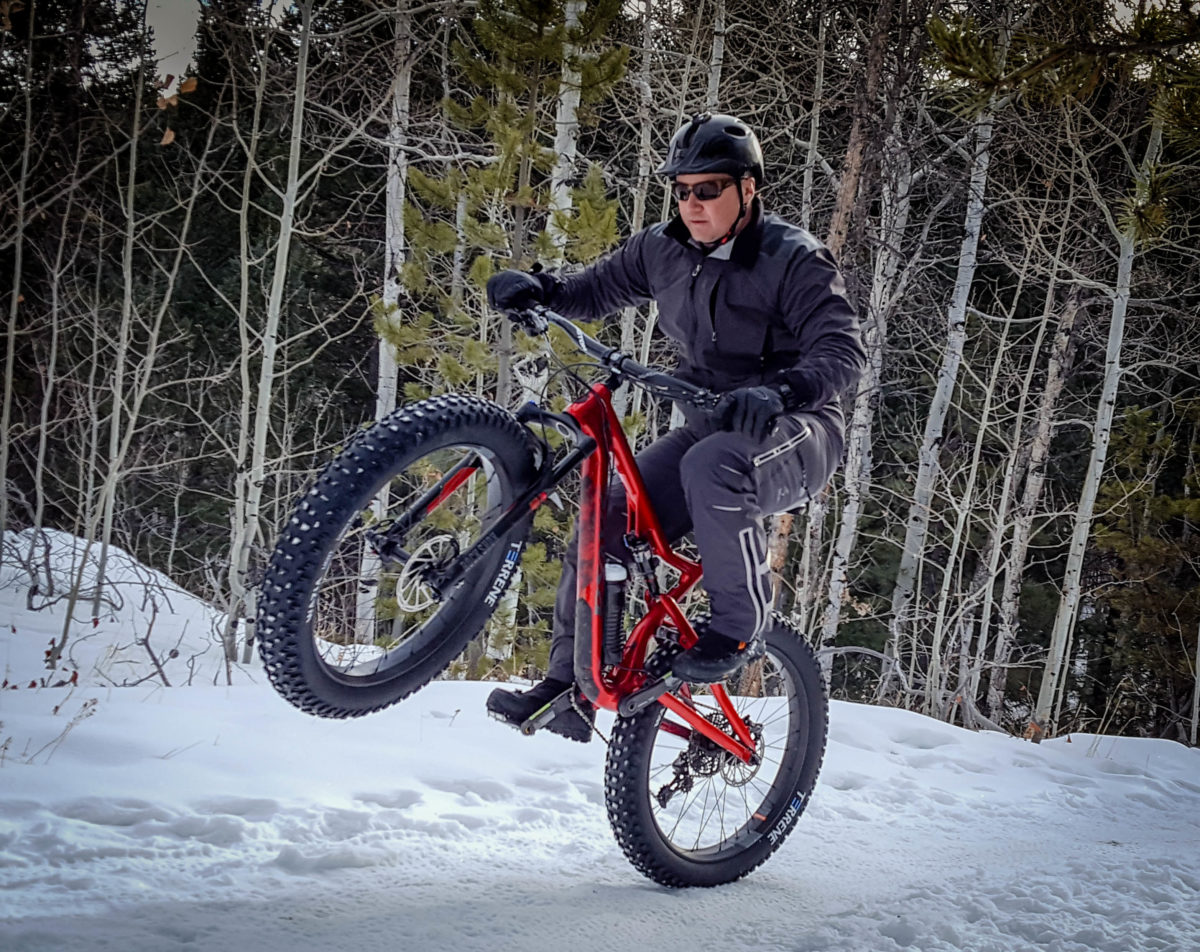 Using an air compressor with the valve core removed, the Wazia Light tires mounted up to my Whisky 70mm carbon rims without any fuss. I allowed them to sit overnight with about 15psi and they maintained pressure, but I decided to prophylactically add 3-4 oz of Orange Seal Endurance sealant to each tire (just in case) and never experienced a flat during the duration of the test period. 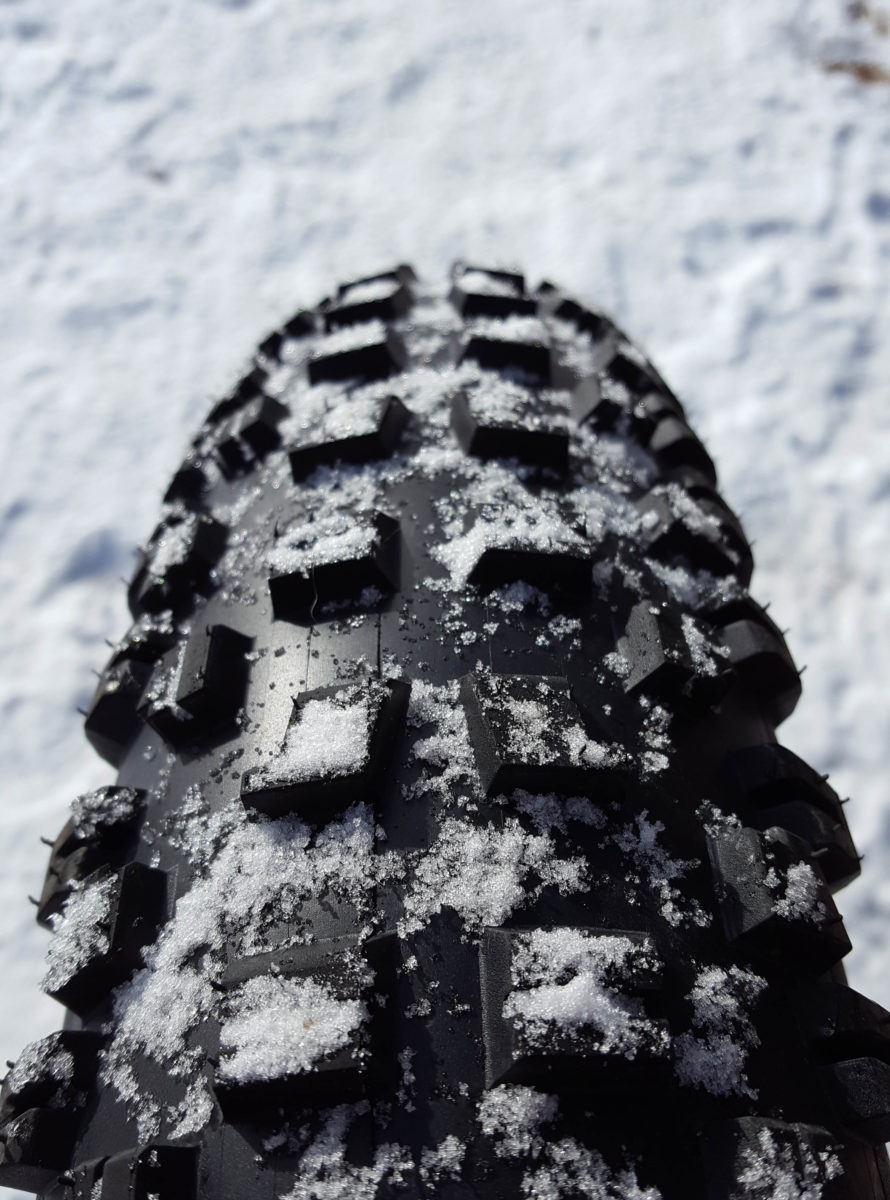 Colorado experienced a good series of snow storms in January, and I was fortunate to test these tires on a variety of mixed conditions right out of the box: crust, ice, packed powder, deep powder, and some dirty stuff in between. In contrast, February was unusually warm, so about half of my testing was actually done on dry dirt.

As expected, the Wazias performed best in packed powder, commensurate with the tread design. Where I live, there are several trail systems that get abundant shade and offer winter-long packed powder goodness, which was the ideal stomping grounds to prove what the Wazia tires were capable of. 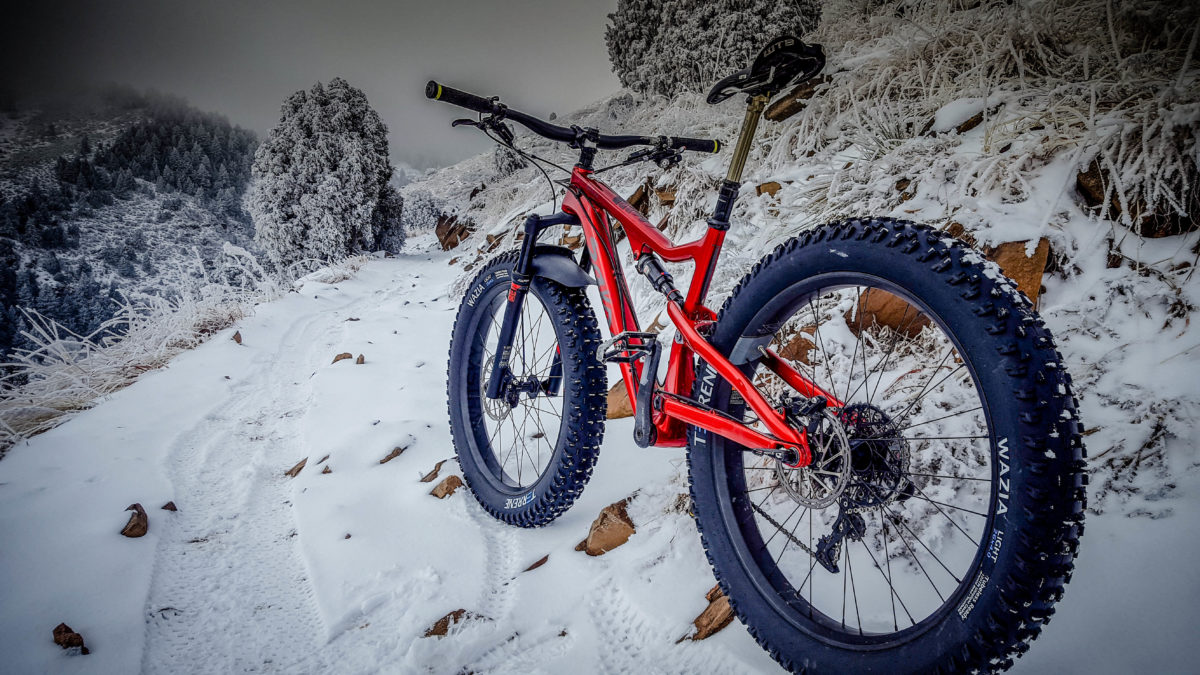 Even on steeper uphill climbs, the Wazias maintained superb traction, and only started to struggle when the grade was steeper than 15-20% on slushy sections, or uphill on icier ones. The tires maintained such excellent traction on packed snow that I found it easy to let the brakes go and just let the bike fly where it wanted. The fast downhill sections of these trails were reminiscent of “hero dirt,” with a sticky-traction feeling and the ability to slide just enough to roost around corners. It was amazing, and the tires did not disappoint. Despite what some might consider insane speeds going downhill on snow, I never felt that I pushed these tires to their limits, and they never let me down.

In deeper powder the tires also handled very well, with a good bite that shed clingy snow and maintained consistent traction in the 4-6 inches that I tested them in. Most rides consisted of “mixed conditions,” and the Wazias did not skip a beat when tasked to transition from snow to permafrost to dirt to ice. They were relatively fast-rolling on dry dirt as well, and absorbed square-edge drops and stuck to rocks in more technical sections.

Wazia tires are manufactured with stud pockets, and I elected to purchase some aftermarket studs and try them out. I’ve learned that no matter how good a tire is, ice is like kryptonite to any non-studded tire. Having 300 tiny pieces of metal protruding from bulky knobs not only helps with traction, but can also save you from serious injury. The worse crashes I have had on a fat bike in winter were rolling fast over patches of ice in corners, camouflaged by a fresh inch of powder. For anyone that has experienced this, you’ll recognize that ice will lay you down faster than you can even put a hand out. 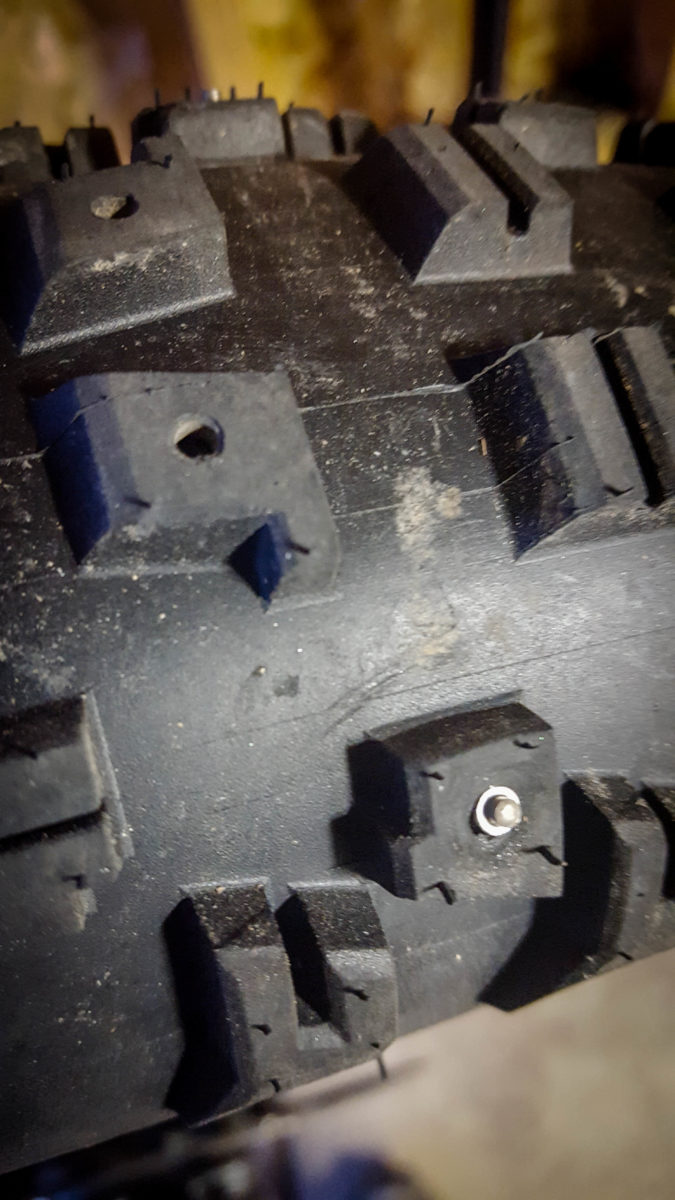 Terrene offers the Wazia in a studded version, as I mentioned, but you can save some money if you install the studs yourself. Be forewarned, however, that installing 300 studs by hand is a time consuming, tedious, painful endeavor. It took me hours of twisting and pushing, coaxing and cursing, to finally get all of the studs seated in their final resting place. In the end, however, having studded tires was worth it. They changed the characteristics of the traction completely on some thaw-freeze sections… particularly on grittier sections of crunchy ice that melted with a bit of dirt frozen into it. The tires still slipped on the slicker sections of ice, but even on a steep downhill section, the Wazia tires maintained traction and I never floundered.

There are a lot of naysayers when it comes to studs, so I have been hesitant to try them for years. Weight has always been one of the biggest counter-arguments, but the 300 studs I purchased only weighed 0.15 lbs for both tires. That penalty seems negligible, and I would argue that having studs is a tremendous benefit in most winter riding conditions. With studs, the Wazias stayed glued to packed powder with uncanny precision, which allowed me to open the bike up and push it harder. The only unfortunate downside to riding variable conditions with studs installed is that I lost about 25 of them on one particular ride that had a lot more dirt than I expected… and that is only because I was having way too much fun skidding and jumping the bike around. 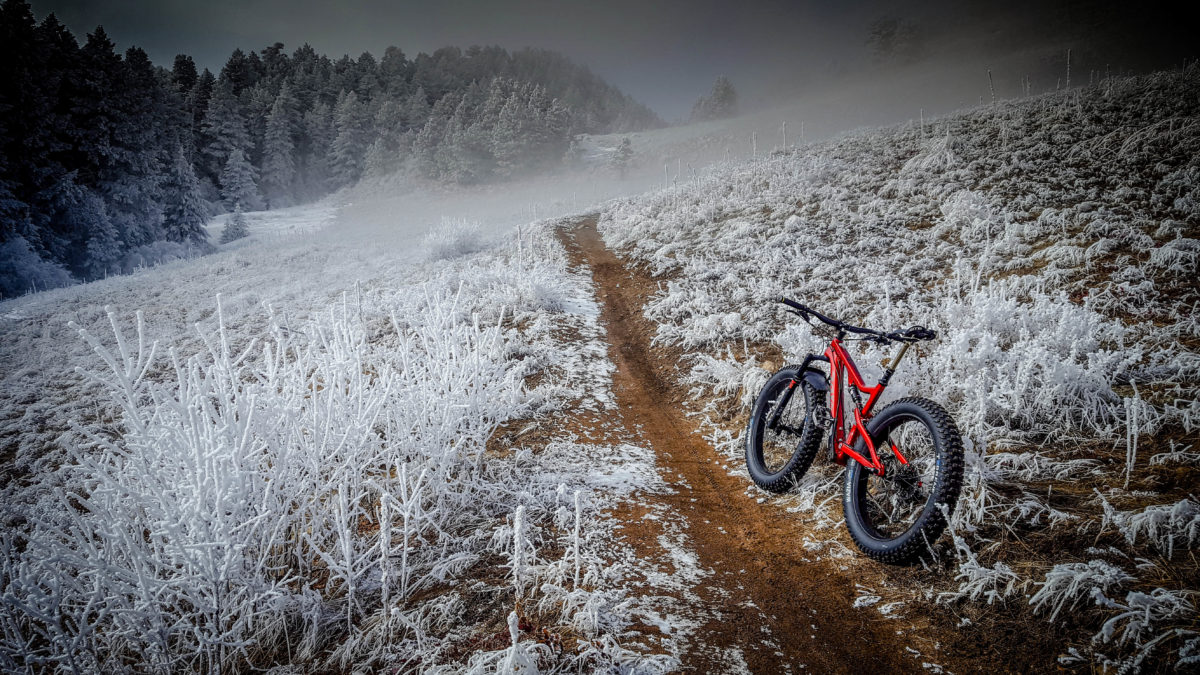 The Terrene Wazia tires are relatively light, competitively priced, and have gobs of traction–from dirt to ice. Having a studdable option is an enormous advantage for many riders in places like the Midwest and East Coast, too, and a worthwhile upgrade if you spend half of your riding season on a fat bike. If you are in the market for a performance all-rounder fat bike tire, the Terrene Wazias should definitely be on your short list. 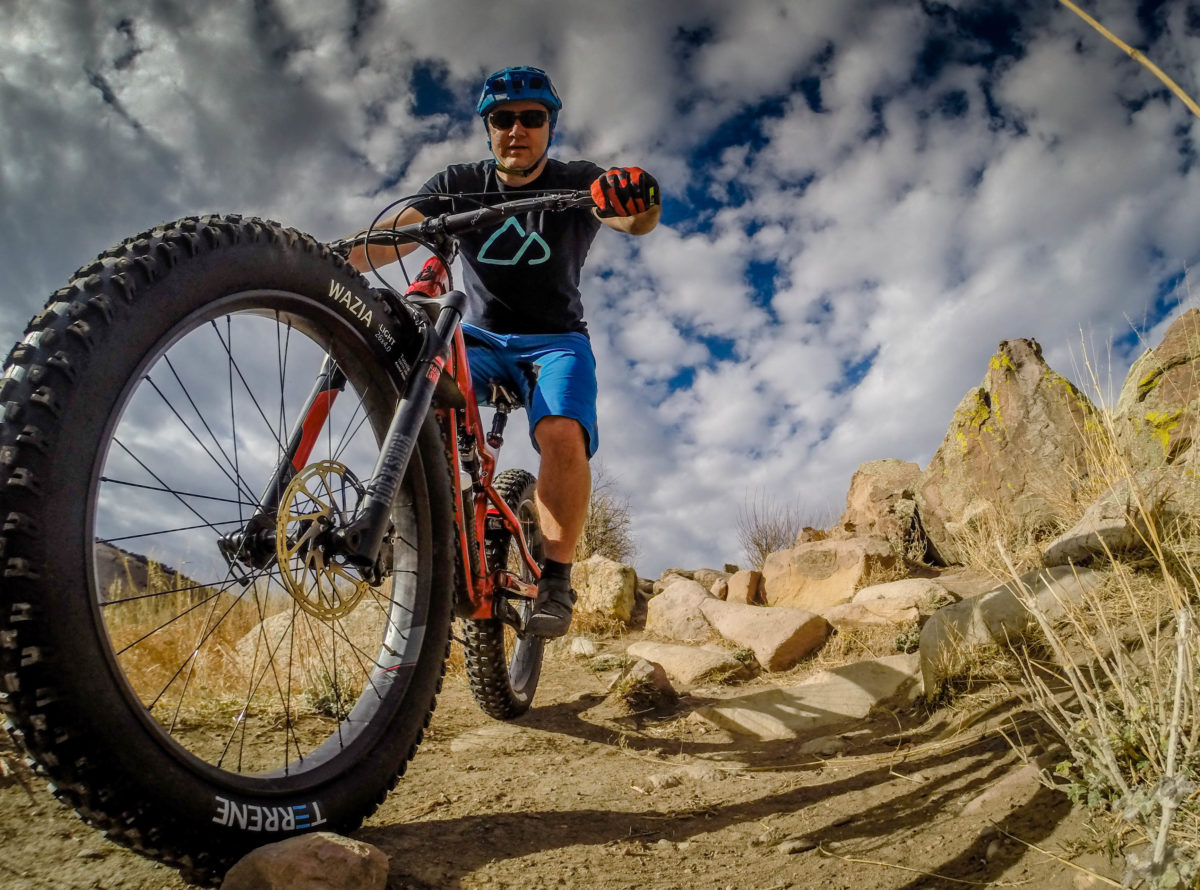 Thanks to Terrene for sending the Wazias over for review!

I’ve ridden some much heavier ones than that on my fatty…and yeah, it’s a workout

I have a Framed Woftrax Carbon fatbike, hard tail and Bluto forks. It came with the Terrene Cake Eaters. I haven’t ventured on ice for good reason and all snow conditions conducive to riding the traction has been good. The dirt trails, mostly grown over logging roads with plenty of debris in the road, has been great as well. Did you review the Cake Eaters as, tool? My question is between the two which is the better tire? My Framed has 27.5 X 4 tires and I haven’t looked to see if the Wazia comes in that size.

“The worse crashes I have had on a fat bike in winter were rolling fast over patches of ice in corners, camouflaged by a fresh inch of powder. For anyone that has experienced this, you’ll recognize that ice will lay you down faster than you can even put a hand out.” FWIW, commercial studded tires like these won’t do a thing to improve that situation. The studs aren’t long enough to reach through the snow. You hit the ground just as fast.

Otherwise, studded tires are great. I hadn’t heard of this brand.

Pro Tip: Use a soap spray to lube the holes before you try to seat the studs yourself.