Bike companies come and bike companies go.  Even if they don’t disappear, they often fall on hard times.  Some top quality brands never really recover (anyone try to buy a Titus or Maverick lately?).  Even venerable Schwinn, once the hallmark of quality bikes in America, is now schlepping out bargain basement bikes for the big box stores.  Smaller companies have an even tougher time staying relevant in the marketplace, but they can do so by being adaptable or by finding a niche and mastering it.

Chumba is one company who appears to be springing back from a down cycle (pun intended) by doing both.  Chumba is reinventing itself as a quality purveyor of made-in-America steel bikes which provide reliable and fun service for those savvy enough to find them.  The Ursa is a perfect example of this philosophy, and the excellence with which Chumba is executing it.  For all the tech talk on this delightful “29+” bike, check out last month’s “on review” article covering the nuts and bolts of the Ursa.  For ride impressions, keep reading.

In skiing, one of the characteristics we speak of with regard to any ski is its edge-to-edge quickness.  Narrower skis are very quick edge-to-edge, hence their use in slalom racing.  Fatter skis, designed for floatation in bottomless powder, are not quick edge-to-edge.  So it is with bicycles.  Try banking a fat bike in the tight and twisty like you would a race sled with 2.0s on the rims and you’re going to find it sluggish.  Amazingly, this is not the case with the Ursa.  On paper, the combination of 29″ wheels, already known for being less maneuverable than the 26s  they replaced, and the fat, 3″ tires would seem a recipe for stable but uninspiring cornering.  However, I found the Ursa to be shockingly quick edge-to-edge.  If it wasn’t as responsive to steering input as a twitchy race bike, but it sure felt like it was, and without being twitchy.

Not only do those big, fat tires dart around much better than expected, they also provide the best security I’ve ever experienced, including full-fledged 4″ or 5″ fat bikes.  How much of this is attributable to the frame and how much the choice of the Maxxis Chronicle tires, I’m not sure.  What I am sure of is myself, and my ability to stay secure on any surface when riding the Ursa mated to the Chronicle.

This setup was most welcome on many of my local trails which are composed of decomposing Pikes Peak granite, a rock that readily breaks down into seemingly-bottomless pea-size gravel.  On the most gravelly and unpredictable routes like Captain Jack’s, where I often find myself doing some less-than-elegant surfing on my 2.4s, the Ursa just begged me to charge faster, and surprisingly, to lay her over at high angles on sketchy and even off-camber turns, with no fear of breaking loose.  The bottomless sand I encountered on the El Cerro trail in New Mexico would have made a ride on my usual steeds a miserable suffer fest, but the Ursa actually made it fun.  I even had occasion to take the Ursa out in the snow, and again rode with confidence.  Even sudden transitions between starkly different surface conditions posed no horrors.

I’ll Take Mine on the Rocks

The Ursa is designed for self-supported, epic backcountry journeys.  It has attachment points galore for your bikepacking gear.  Again, one would assume this would make for a stable but less-than-inspiring ride and again, one would be wrong.   The Ursa was indeed a faithful companion on long rides without hope of rescue, but it was also a joy on quick 1-2 hour sprints through local techy venues like Palmer Park and Ute Valley Park.  Being able to grip anything at any time really enhances the fun of a ride.

Just as really fat tires on a 26″ frame give an outer diameter closer to a 29er, putting 3″ tires on a 29er give you something even bigger.  The rollover provided by the Ursa took the 29er thing to a whole new level. On lines I would normally avoid due to treacherous wheel traps, the Ursa coaxed me into taking them straight on, which I did with gusto, finishing with a goofy grin that just wouldn’t go away.  I wondered about the inclusion of routing for a dropper post on such a bike, but spent most of my time joyfully riding on terrain where a dropper post would have been most welcome.  The Ursa is still a fully rigid rig, so it remains a fact that if you dive bomb her hard into crazy chunk, she will buck a bit.  The relatively long top tube and chainstays also keep the Ursa from ranking high on the huckability scale.  This is not your first choice downhill or enduro racing bike, but for any other application, she’ll carry you through with grace and dignity. 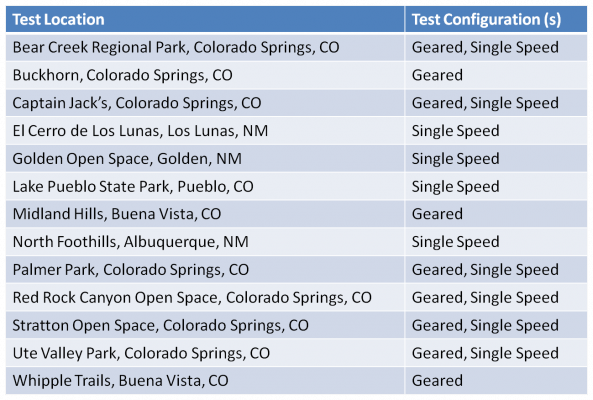 As if the inherent versatility of the bike’s frame and wheel combination weren’t enough, the Ursa frame allows for either geared or singlespeed operation.  Colorado’s front range isn’t exactly the most singlespeed-friendly venue, so I approached this portion of the review with some concern.  Of course, having fallen in love with the geared version, being able to keep the Ursa a few extra weeks under any circumstances was a most welcome event.

For my fitness level and the severity of my terrain, the relatively light 30×21 setup Chumba shipped me turned out to be just right.  If I lived in a less mountainous locale, I would opt for a slightly harder gear ratio.  All the joys of singlespeeding are most evident on the Ursa.  That surprising edge-to-edge quickness, and the confidence inspired by the big, fat wheels, are force multipliers with regard to preservation of momentum, so very important in singlespeeding.

The XT/equivalent parts kit on the Ursa performed as expected: smoothly and reliably in most cases.  Shifting in the original 2×10 configuration was uneventful: as it should be.  Since their inception, I have preferred XT disc brakes for their simplicity and performance, but the pair on this Ursa, while brimming with power, seemed to lack modulation.  They were quick to go straight from open to fully locked, and I had to really lighten my touch to get them to behave like the XTs on my older bikes.

The Whisky 9 carbon fork proved to be a real highlight and something I would consider to be a mandatory upgrade for anyone purchasing this bike (unless using it as a pure bikepacker, in which case the Surly Krampus fork remains the best choice).  In addition to being way cool with its internal in-the-fork hose routing, the light weight of the Whisky fork made for easy wheelies, greatly enhancing technical climbing where frequent and/or large step ups must be executed. The light fork effectively compensated for the wheelie challenge posed by the bike’s stretched out geometry.

Remember making that transition from dating for fun to looking for someone you could settle down with for the long haul?  Remember when you realized that really fun guy/gal wasn’t really all that stable and wasn’t going to make a good long-term mate?  And how many people have settled down for security and stability only to find those things come at the expense of spontaneity and having a wicked-good, let-your-hair-down-and-party good time? The Chumba Ursa somehow manages to max out both the fun and the stability factors, will do so for years on end, and will always look mighty fine doing it.

Glad to see you got a chance to take the Ursa on the snow! Fun bike in the dirt yet still seems capable in the snow.

Yeah, I was quite pleased to get the early season snowfall. The Ursa acquitted herself admirably. I was afraid the “mid-fat” might be a compromise which fell short in both areas, but rather it turned out to be crazy fun on the dirt and highly capable in the snow.