Us mountain biking types rarely let a spat of foul weather keep us off our bikes for too long, and the good people at Sweet Protection have designed more gear to help make braving the weather a bit more enjoyable. Hopefully their newest jacket, the somewhat oddly named “Delirious,” will help riders maintain their sanity while out in suboptimal conditions.

According to Merriam-Webster, to be delirious means to be “affected with or marked by delirium.” Going one step further down the dictionary rabbit hole, delirium has two meanings: “1. an acute mental disturbance characterized by confused thinking and disrupted attention usually accompanied by disordered speech and hallucinations” or “2. frenzied excitement.” Personally, I would like to think that Sweet Protection’s design intent with the Delirious jacket erred more to the side of the second definition, as experiencing acute mental disturbances while out on the trail is typically not a welcome scenario. Though I didn’t experience any bouts of frenzied excitement while wearing the jacket, I will admit that I was stoked at the prospect of putting some waterproof gear to the test, as I have a bit of a masochistic streak when it comes to weather-related testing. Maybe I have delirium after all…

There’s a reason why so many people know the Gore-Tex brand name — the material is just about as waterproof as fabric can get and has become the de facto standard when it comes to making gear for heavy-duty weather resistance. However, Gore-Tex’s strongest asset also has a tendency to work against it if there’s any amount of cardiovascular work involved for the wearer — just as well as a Gore-Tex jacket can keep water out, it can keep sweat in. Thankfully, Sweet Protection has designed their Delirious jacket using Gore-Tex Active, a much more breathable material that still provides a proper amount of waterproofing.

In my experience with the jacket, I ran a bit on the warmer side, though I wasn’t nearly as muggy as I’ve been in older Gore-Tex gear, as there’s understandably still a good amount of heat retention when wearing a hardshell. With materials science being bound by the laws of physics, one can’t have their highly breathable waterproof cake and eat it too, but when you’re out in unfavorable conditions, an extra bit of heat isn’t the worst thing. With adjustable cuffs on the sleeves and an adjustable waist draw, I was able to regulate that stored heat a bit to try and achieve that Goldilocks level of warmth.

With Gore-Tex being the material of choice, effective waterproofing was all but guaranteed, so long as the Nordic seamstresses were careful with their stitching. Thankfully, the Delirious jacket is expertly crafted with cleanly-sewn seams joining the panels, which are fully taped to keep any moisture from sneaking through the jacket.

For the sake of Singletracks readers everywhere, I subjected myself to Washington state’s famously unfavorable rains and am happy to report that Sweet Protection’s jacket did an admirable job of keeping me dry in most conditions. 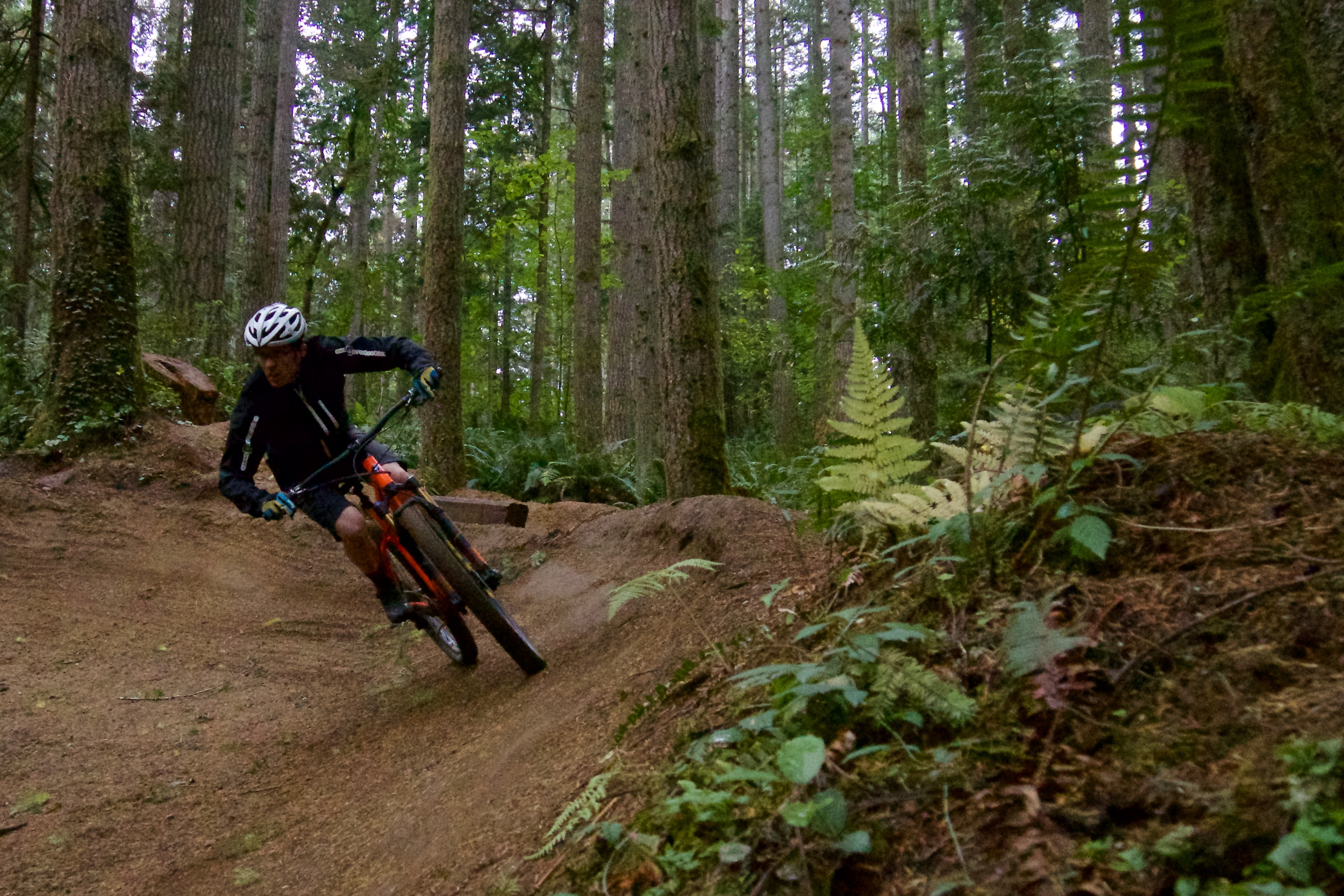 One peculiar aspect of the jacket was its lack of a hood, which is all but standard in the world of rain jackets. On days where Mother Nature opted to spit instead of pour, the missing headcover wasn’t too much of an issue, but on more classic PNW days, the hoodless jacket did come up a touch short in terms of all-out dryness. The neck of the jacket can be cinched down to offer a bit of a seal, but I wasn’t much a fan of the “being choked by a very weak man while I’m riding a bike” feeling that the elastic band gave me, so I found myself forgoing the tightening altogether. This led to a bit of rainwater finding its way in, but on days when it’s really pouring, how often will you find yourself out on the trail? As time wore on, and the rest of the jacket’s merits shined through, the lack of hood became less an issue for me, but it’s worth mentioning for those who don’t shy away just because of a little monsoon.

While Sweet Protection may have skimped on material to cover the cranium, they did an admirable job with the cut of the jacket elsewhere, with ample material left to cover the posterior. After rides in sloppier conditions, I was saved some the shame of a brown stain on my rear, thanks to the long tail of the Delirious jacket, which made walking into the local dive for a post-ride beer much more comfortable. In addition to the extended rear of the jacket, the overall cut of the jacket is fairly generous, allowing for multiple layers to be added, should the rider want to venture out for a frostier ride.

Overall, Sweet Protection’s Delirious jacket is a solid, if not simple, piece of wet weather riding kit. While there weren’t any real whiz-bang exciting features, the designers’ focus on quality was much appreciated, with clean stitching and top-tier materials being the main selling points of the jacket. With a name that implies frenzied excitement, I would have expected a jacket with a little more panache, but the classic lack-of-colorway of jet black has its appeal as well.

If you’re a rider that just likes dead-simple gear that will work with minimal fuss, then the Delirious might be your new go-to. If anything, wearing it protected this rider from experiencing hypothermia-induced delirium, which is always a plus.

Thanks to Sweet Protection for providing the Delirious Jacket for review.

Progression
Sizing Up or Down Plus Handlebar Widths and Crankarm Lengths:...
Gear
These MTB Deals are Fire, including 40% off Patagonia Dirt...
Gear
The Maxxis Minion DHF Tire is Still the One to...
Gear
Never Underestimate the Power of a Good Zip-tie
Subscribe
Login
Please login to comment
1 Comment
Most Voted
Newest Oldest
Inline Feedbacks
View all comments

Alec, any idea why the company didn’t include a hood? Did you ask? For me, there are plenty of times where I get hit by a summer monsoon and get off the bike to let the storm go by. It is definitely nice to have a hood when off the bike in hold mode. No hood is a deal breaker for me. Plus, I often use my rain jacket as an outer thermal layer in early winter riding (rides in the 20s F). I find the hood really helpful on long descents to keep the head and ears warm.