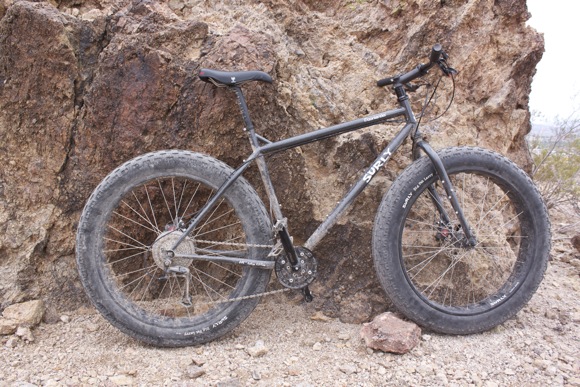 These days the trend seems to be toward fatter and fatter mountain bike tires and no one is pushing the envelope more than Surly. By now you’ve probably seen the Pugsly but this year the company is taking things to a whole new level with the Moonlander. 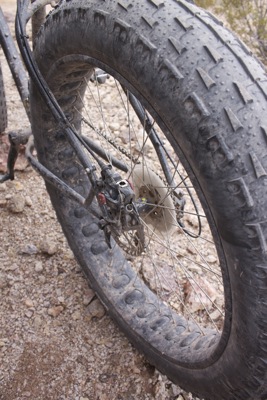 At first glance the Moonlander looks like a two-ton beast that has no business riding anywhere but in a flat, straight line but I decided to give it a spin around the singletrack loop at Outdoor Demo. Despite the ginormous wheels and heavy tires I was still able to pass riders on more traditional bikes steaming up the road proving to me this is bike is more than just a concept bike or a gimmick. And although the rims on the Moonlander are officially 26″, with the tires the wheels have nearly the same effective diameter as a 29er.

On the loose, sandy trails the Moonlander seemed to be at home and felt like it floated over much of the terrain. Of course that also meant it was terrible at cornering (surprise!) but the ultra high volume tires provided a nice cushion that almost felt like a suspended bike over small rocks despite being fully rigid. A couple of times I caught myself looking over my shoulder to spot the truck I was sure was following behind me, only to realize the deep, crunching tire sound I was hearing was coming from my own wheels.

The rims on the Moonlander called “Clown Shoes” feature two rows of spoke holes and can be laced in a number of configurations. The demo rig I tested was laced on the drive side of the rim only which looked odd at first but didn’t seem to affect the ride. The Moonlander features a steel frame and rigid fork and comes with 3.8″ Surly Big Fat Larry tires. The space-y, reflective flake paint job is other-worldly. 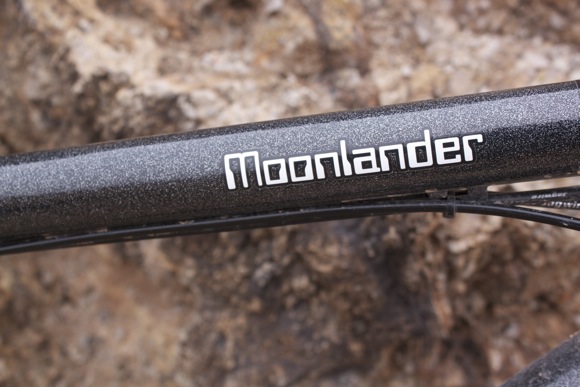 I think for me to own one of these bikes I’d need to move somewhere where it snows at lot or at least grow a full beard. Still, the Moonlander is a fun and unique bike for cruising around or even hitting the trails just as long as you don’t take yourself too seriously out there. 🙂

I happen to own a Pug and I ride it on singletrack all the time and it is my most often weapon of choice. I live up in New England and I thought it would be a big mistake to ride it all year round, but it is by far the most fun to ride. Next time you ride a fatbike check the air pressure, I run my tires 18psi in the front and 15-16 psi in the rear for summer riding and I have had no issues with cornering what so ever!

I acually want to try a ‘fat front’ setup on my SS. Got a spot near town I think it would work really well…..

Just thought I’d point out that the Larry is a 3.8″ tire, but the Big Fat Larry that the Moon Lander comes with is 4.7″. I am seriously considering this for winter and summer riding here in MN, but need to hop on one. I was told it’s good in muddy environments and on the dunes as well though.

Thanks for the correction phranquy. The tires on the Moonlander are definitely larger than the Pugsly!

I gotta say,,,,,,this thing just flat looks like a Mountain Bike….thr rigid frame and fork,the fat tires,the dirt strewn look.I rode a pugsly once and was blown away by how they ride,I can only imagine that surely has raised all bets…

How does a studded tire, on a regular mtb compare to a fat tire? I ride my bike all year. Although I can’t ride in all snow conditions I can ride in most. I would like to have a fatbike, but I think my money might be better spent replacing my 6 year old bike, with another all mountain, and keeping a set of studded tires around for the winter. ALSO, I have heard that the fatbikes get hard to control on fast down hills because the wide tires act like basket balls and are uncontrollable at speed. I don’t own or have ever ridden on studded tires or a fatbike, just looking for information.