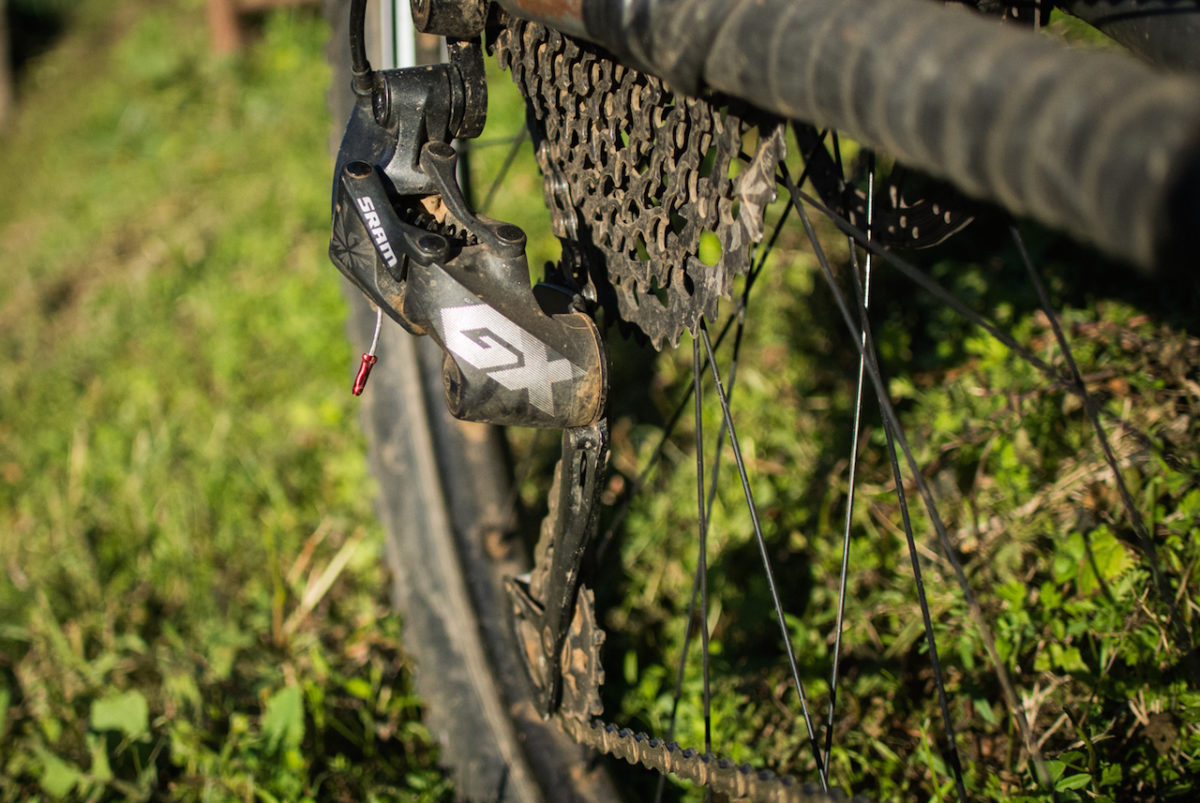 By now, we all know the story of SRAM vs The Front Derailleur. Our own survey results indicate it’s a battle SRAM is winning. Last year, SRAM upped the ante on 1x drivetrains with their high-end XX1 and X01 Eagle groups. Eagle added a 12th cog to the cassette, which is notable itself, but the real news was the size of that gear: a whopping 50 teeth. An 11-speed SRAM cassette offered 420% range (10-42T), but the 12-speed increased that to 500% (10-50T).

What does all this mean for the average mountain biker, though? Obviously, the 50T cog gives you a super-low gear for climbing — that’s the clearest benefit. Even top-tier trail bikes hover around 30lbs and they continue to get longer and slacker, which makes climbing a chore. The return of the granny gear is a welcome homecoming for tired legs everywhere. More low-end gearing is probably enough to sell many riders on 12-speed by itself. But another major — and often overlooked — benefit to the Eagle drivetrain is the ability to run a larger chainring.

Granted, this may not be applicable to everyone, however, it’s an important consideration for racers and riders that want more usable range.

The original SRAM 1x-specific group — XX1 — launched in 2012. It took SRAM another three years to release the midrange GX equivalent, so the quick turnaround on GX Eagle came as a surprise. Just a year after XX1 and X01 Eagle debuted, GX Eagle started popping up on bikes and in stores. I tested the 11-speed GX group back in 2015 — and it’s still going strong — so I thought it would be useful to compare the two.

A couple notes on the charts below. The prices listed are full MSRP for the least-expensive configurations; depending on the crank chosen the price may increase. I didn’t include the BB in the cost or weight breakdown since there are several options. As for the weights, those are actual, measured weights.

Of course, you can find deals on 11-speed GX now that Eagle is out, but it’s impressive that only $58 separates the two groups. All of the price increase is, unsurprisingly, from the cassette. The similar price point means complete bikes previously spec’d with GX 11-speed should cost about the same with GX Eagle on them.

As for the weight, there’s an 89g (3oz) penalty with GX Eagle. Again, most of the increase is due to the giant cassette, but the derailleur contributes as well. SRAM trimmed nearly 60g off the Eagle cranks, though, bringing the overall weights back in line.

In terms of price and weight, it’s essentially a draw between the two. When talking about performance, the clear winner is GX Eagle. GX was already a solid performer but Eagle is better in nearly every way. The shifting action is lighter at the lever, and it’s crisper, faster, and more precise. Chain retention is at least as good. Dropped chains were already an extremely rare occurrence with 11-speed and I have yet to drop one using Eagle.

The performance gap between the various Eagle groups (GX, X01, XX1) is minuscule. If weight is a concern — or if you just have the means — then by all means, go with one of the higher-end groups. Otherwise, GX leaves little to be desired. 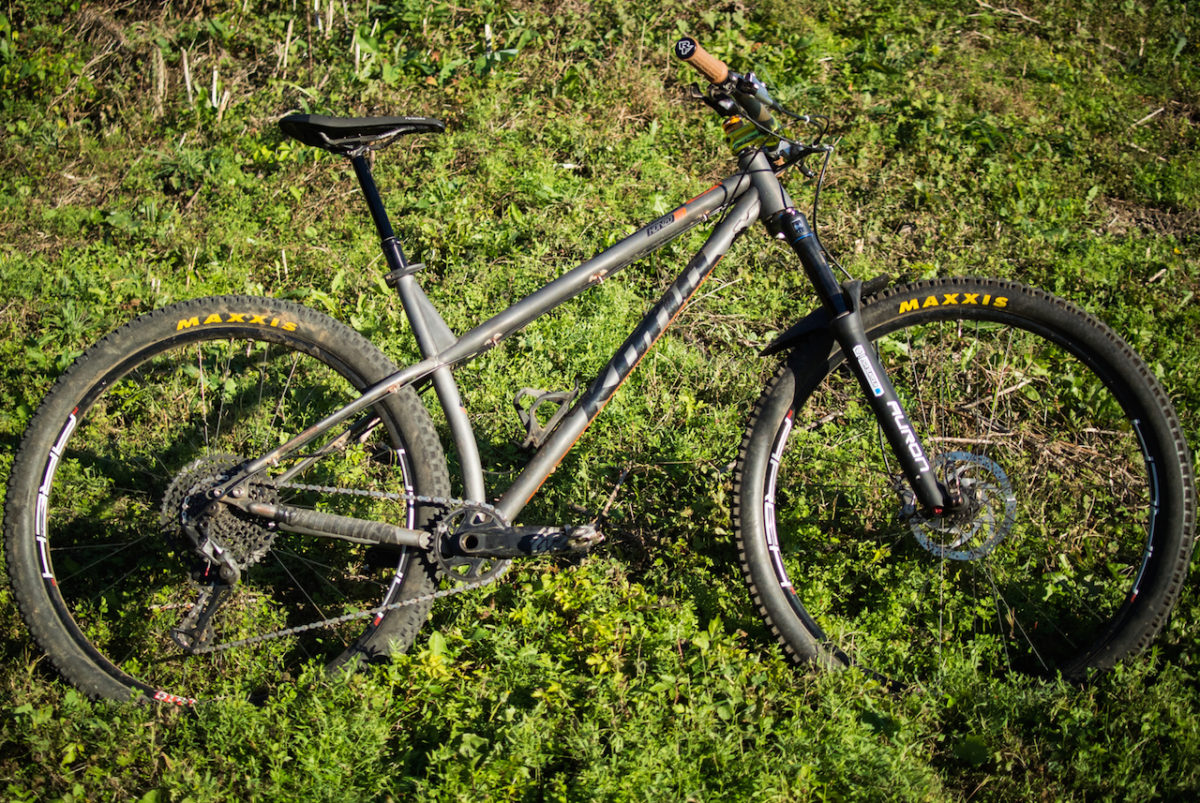 My steel-framed 2017 Kona Honzo hardtail served as the platform for the GX Eagle test. Kona tailored the Honzo’s geometry for maximum fun: it’s a long, low, and slack bike. Oh, and it’s heavy. I haven’t weighed the complete bike — because I want to remain ignorant — but I suspect it weighs at least 30lbs. With that in mind, I chose a 32T chainring for the crankset. If I were running an 11-speed drivetrain, I’d probably go with a 30T.

Installation was straightforward, with a couple notes. First off, setting the “B-gap” is crucial for optimal shifting performance. SRAM provides a small plastic gauge with the rear derailleur and has detailed videos on YouTube for how to use it. I set the B-gap by myself on my hardtail but you will need help on a full suspension bike since you have to compress the rear shock to the sag point. The other thing I would recommend is to make sure your rear derailleur hanger is perfectly straight. This is something you should do for any drivetrain, but with such small gaps between the gears on 12-speed, it’s a vital step. Most home mechanics won’t have a derailleur alignment gauge, so you’ll need to visit your local shop.

Once I had the drivetrain installed and tuned it ran smoothly for the duration of the test. Regular cleaning, lubing, and a couple turns of the barrel adjuster was all it took to keep it humming along. On a big backcountry ride, I took a huge stick in the rear derailleur which negatively impacted the shifting. However, the culprit turned out to be a tweaked hanger and not a problem with the derailleur itself. That encounter — along with a few assorted off-the-bike moments — left me impressed with the durability of Eagle overall.

As I mentioned before, Eagle’s shifting performance itself is a big step above 11-speed GX. Shifts going up the cassette, in particular, are quick and tidy, even into the 50T. Coming back down from the 50T to the 42T is the only notably slow shift on the whole cassette. This shift takes a little more thumb muscle and there’s an audible “cah-chunk” as tension is released. I miss the dual-release of Shimano’s shifters but after a couple swings and misses with my index finger, I remember that’s not an option.

The chain stayed in place while pedaling backward, including on the 50T cog. That’s an impressive feat considering the severe chain angle from the ring to the cog. I’ve ridden numerous 11-speed Shimano-equipped bikes that drop the chain down the cassette during backpedaling, particularly in the largest cog.

After a few hundred miles the chain and cassette are still in good shape. The cassette especially seems to be fairing well, showing less wear than the 11-speed GX cassette did at this point.

So GX Eagle shifts great and is durable, but it can’t be all roses, right? Here are a few potential drawbacks to mull over.

For many, price is the main factor under consideration when upgrading components. When it comes down to nickels and dimes, Shimano’s groups cost less from online retailers. I’m not casting judgment one way or another here, it’s simply a fact of the current bike market. A comparable SLX M7000 drivetrain runs about $275 — over $200 less than GX Eagle. Even if you bumped up to XT, you’re still only looking at $330 for the drivetrain.

Also, if your wheels use a Shimano driver, you will need to convert them to a SRAM XD driver to use the cassette. Depending on your hub, that’s another $50-$100+ you’ll have to spend. Of course, with Shimano you get 11 gears instead of 12 and a 46T large cog instead of a 50T, but those are first-world problems.

Replacing the wear items on Eagle costs more, too. The cassette, while well-made, will eventually wear out. When it does, that’s a $200 item. Inexpensive 12-speed chains are $30 a pop and an Eagle chainring runs $100. Pro tip: invest in a chain checker tool and replace your chain as needed to prolong the life of your drivetrain.

Should you decide to run a larger chainring, invest in a bash guard of some sort. Going up to a 34T (or even a 36T) from a 32T means you’ll have less clearance over roots and logs. Protect that expensive chain and ring!

The GX Eagle rear derailleur needs a long cage to handle all the chain. A longer cage means there’s more derailleur hanging out there to get snagged and possibly broken. Anecdotally, I picked sticks and leaves out of the pulleys more frequently compared to 11-speed.

And finally, adding a heavier cassette and rear derailleur to a full suspension bike means you’re increasing the unsprung weight. Doing so impacts suspension performance. Honestly though, if this is really a concern, you should probably be riding an internally-geared bike.

Inevitably, riders will claim that SRAM slapped another cog on their 11-speed groups just to sell more stuff. They’ll say they’re just fine with their 11-speed drivetrains, that they don’t need 12-speed. Okay, fine. But that’s something we hear about every new product: I don’t need bigger brakes; I don’t need a longer-travel fork; I don’t need wider rims; and on and on. After riding Eagle drivetrains on numerous test bikes and now conducting my own long-term test, I can tell you — definitively — it’s better than 11-speed. The difference between SRAM’s 11-speed and 12-speed groups isn’t “game changing” like swapping from rim to disc brakes, but it’s also more than a marginal improvement.

Whether or not you need Eagle is a personal choice, but I certainly want it on all my bikes now.

Thanks to SRAM for providing their 12-speed GX Eagle drivetrain for review.

If the cost of the 10-50 GX cassette is a deterrent, and/or the cost to upgrade your hub to an XD driver, SunRace makes their CSMZ90 11-50 12-speed cassette, which fits standard HG drivers. The caveat is that you lose the top-end gains because you’re still stuck at 11T top gear, so range is not the full 500%, but it’s a WHOLE lot cheaper if you’re not rocking XD, not to mention the SunRace CSMZ90 can be had for almost half the price the GX 10-50 cassette (and, of course, weighs a lot more at 586 grams).

I have had my GX Eagle for 3 months, covering 1000 miles. At this point it shifts as well as my old Shimano SLX with 5000 miles on it. Which isn’t too bad; but more disappointing than impressive. Two weeks into this Eagle’s service the chain jumped the lower jockey wheel and jammed in the derailleur cage. This might have bent the hanger or derailleur a bit, because its shifting was ruined—as in not rideable. The Bike Shop fixed it good as new. But after a few more weeks it developed a ticking noise in gear 9, and the occasional ghost shift to or from this gear. Unfortunately, I frequently use this gear for near level riding, especially on the street to and from local trails. No amount of barrel nut twiddling improves it. I’ll try a new cable and housing when I get the chance. But so far, the my GX Eagle has been less reliable and far more finicky than my Shimano derailleurs. In fact, my really old SRAM X-9 on a 3×9 drivetrain still works better than my GX Eagle.

Agreed DRCbrath. I have bent 2 derailleurs and 1 hanger since I started using GX in May 2017. One time, a small stick got jammed in lower cog and bent it beyond repair. Inherently, because the cage is longer, it is at more risk of bending. I ride in New England and there are plenty of baby head rocks sticking up and sticks everywhere in the fall. Plus, I am an aggressive rider and hit big drops and technical stuff. On my old bike I had an Shimano 1×11 and never bent the derailleur. I contacted SRAM and asked if they were seeing any trends in this and they told me no. My guess is not many all mountain/enduro riders are using a 1×12. If I bend this one, I think I’m going to go back to 1×11