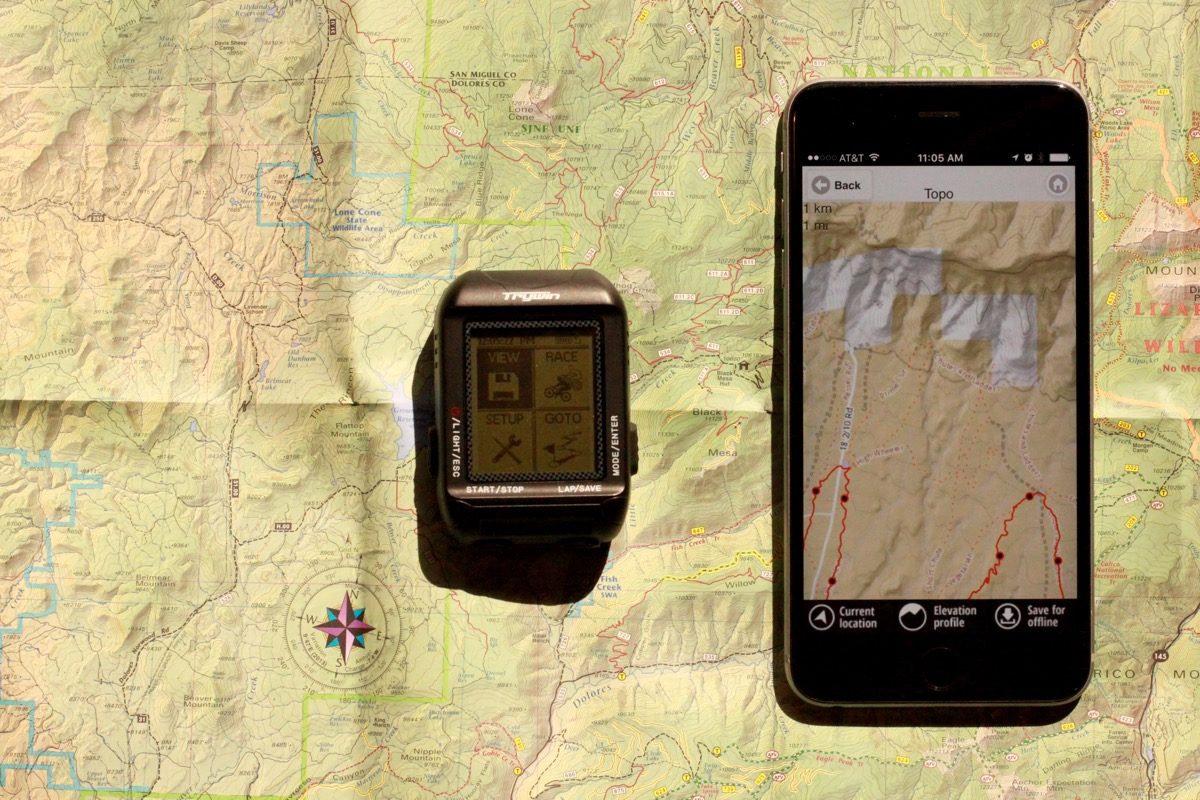 With so many great GPS apps for smartphones available these days, many mountain bikers are asking themselves: “should I ditch my GPS unit and just use my smartphone on the trail?” And for those who don’t own a GPS yet but are considering purchasing one, answering this question will ultimately cost or save hundreds of dollars.

Many mountain bikers are already using their smartphones as a mountain bike GPS, but the truth is this solution isn’t for everyone. Here are the pros and cons of using your smartphone to navigate trails or record your MTB rides. 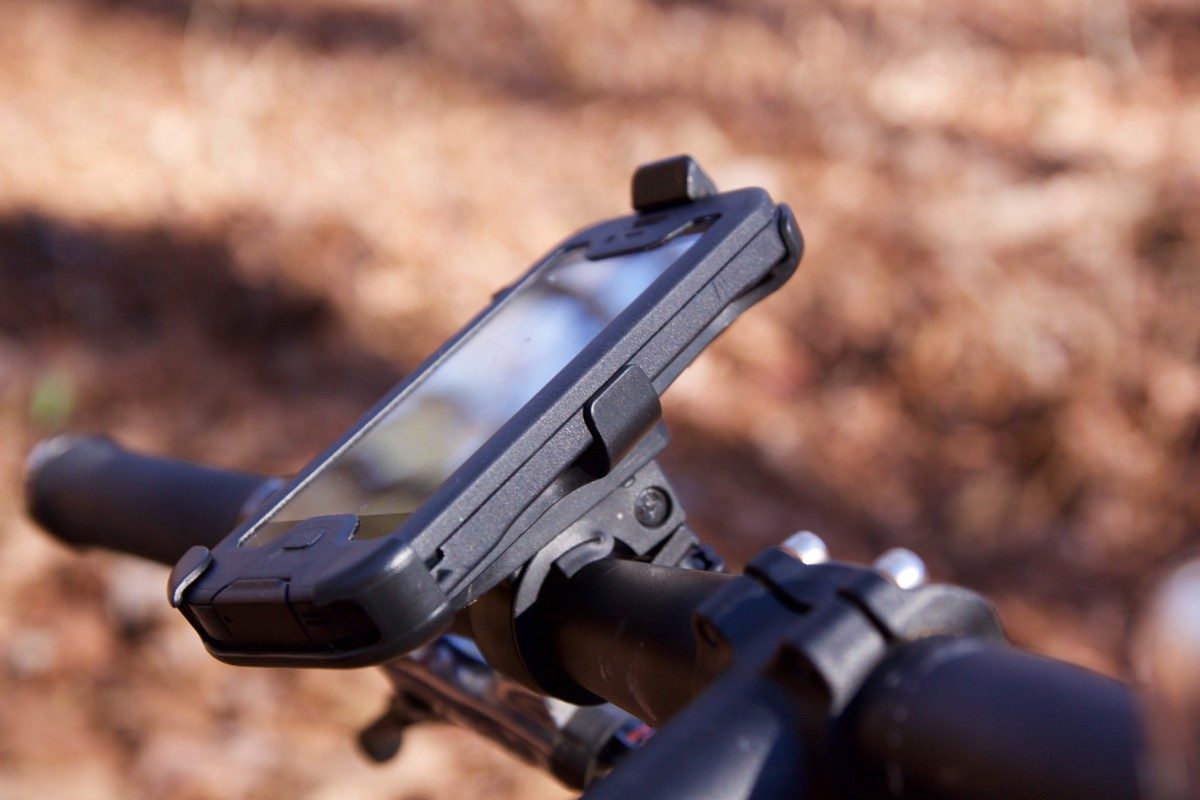 Smartphone screens are better. Not only are smartphone screens higher resolution than those on dedicated GPS units, they’re also generally much more responsive. High-res screens make it easier to see map details, and users can utilize familiar pinch and swipe motions to navigate map screens.

One caveat when it comes to smartphone screen quality is that smartphone screens can be difficult to view in bright light conditions. Many dedicated GPS units have screens that are designed to remain highly visible in most outdoor light situations.

Sharing GPS data is a cinch. Because smartphones have data connections directly to the internet, getting GPS data off the phone and into cloud services like Strava, Endomondo, and MapMyRide is automatic. Many dedicated GPS units have this ability, but often piggyback off smartphones or need to be in the vicinity of an open wi-fi connection. Smartphone GPS apps open up the possibility of joining a friend mid-ride or getting instant feedback on your performance.

Mapping options are unlimited. Because smartphones are often connected to a data network, it’s possible to view many different types of maps within various GPS apps. There’s no such thing as a perfect map, and not only that, maps must be constantly updated to remain accurate. GPS devices cache static maps, and are limited to the maps loaded ahead of the ride. Smartphones, on the other hand, have the ability to grab fresh and varied maps in real time, assuming they have a data connection (more on that later).

Smartphones have cameras. There are a few GPS units on the market that have cameras built in (even video cameras), but the image quality from these devices leaves much to be desired. Clearly a camera isn’t required for GPS navigation or tracking, but many users enjoy taking geo-tagged photos to document their rides.

It’s not all sweetness and light when it comes to using a smartphone as a cycling GPS.

Dedicated GPS units get much better battery life. If you’ve ever used a smartphone GPS app, you’ve probably seen a warning that states GPS use can significantly drain your battery. Depending on your smartphone, you might be able to get 4 hours of continuous GPS use during a ride, compared to 12+ hours from a dedicated GPS device.

For this reason, many bikepackers and marathon racers rely on dedicated GPS devices to get them through their rides.  In fact, some GPS units can last 24-hours or more on a single charge, while others utilize standard AA batteries which can be easily swapped out during an epic adventure.

Smartphones are fragile. Not only are smartphones fragile, they’re also much more expensive than most GPS units. Many riders simply don’t want to risk damaging their smartphone in a crash. Of course there are special cases designed to minimize damage, but these can be bulky and in some cases, can cost as much as a dedicated GPS unit. Still, many of us bring a smartphone along on our rides anyway for emergency communication purposes.

I regularly ride with my smartphone and often use a GPS app while I’m riding. A couple months ago, I had my phone in my front shorts pocket for easy access to the camera and GPS. Well, I took a spill crossing some wet railroad tracks and landed on my side, crushing the screen on my smartphone. The screen was completely blank so I took it in for repair ($200). But once I started using the phone, I realized the camera was broken too. Another $200 repair followed. 🙁 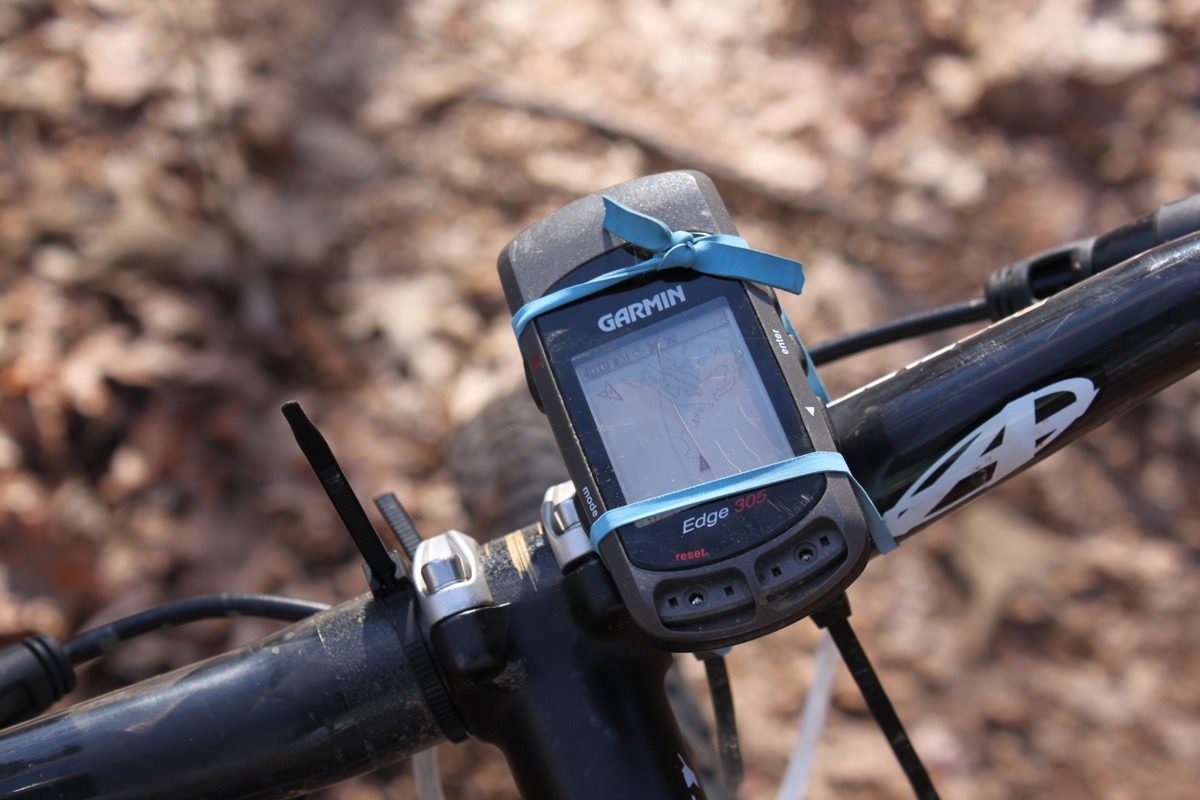 By contrast, I crunched a Garmin Edge GPS in my car door and despite the unit cracking open like a walnut, it still worked for years after that.

As stated earlier, dedicated GPS units also have screens that are optimized for outdoor use, with minimal glare and backlit displays for night riding. Cycling GPS units also come with dedicated mounting hardware, while smartphone users will need to purchase an after-market solution for attaching the phone to a set of handlebars.

I’ve tested a few smartphone bike mount solutions and honestly none of them were great. Smartphones are big and slab-shaped, which doesn’t lend itself to easy handlebar mounting. In a best-case scenario, riders are left with a wind sail jutting off the front of the bike, begging to be caught by an errant branch.

GPS units don’t rely on data connections. Many mountain bike rides take place well beyond the reaches of cell towers, which limits the effectiveness of many smartphone GPS apps. While many apps do offer the ability to download map data ahead of time, dedicated GPS devices are better suited for grab-and-go rides.

So what’s the verdict? Unfortunately, there isn’t one. Depending on how you plan to use GPS technology on the trail–for navigation, fitness, or documenting rides–and how you prioritize the items listed above, you may find one solution better than the other. The good thing is there are plenty of choices out there, and there’s no right or wrong answer!

What do you think: Do you prefer a smartphone app or dedicated GPS for mountain biking?

Phone for me. Cold always zap the phones battery though, that’s why I don’t mount it and just keep it in my pocket. My friend always mount his, and on blistery rides, his phone always dies before the end of the ride.

What’s a good GPS device to have for mountain biking? The Garmin Edge 1000 looks like the best one, but can it be used to find single track trails?