When I purchased my first iPhone back in December 2011, I knew I was going to be rough on it. I’d destroyed regular cell phones in the past, and generally my lifestyle (riding mountain bikes all the time) tends to be hard on the gear and phones I use. I also knew I didn’t want to spend oodles of money on an insurance policy, so for Christmas I requested a case that would function as a physical insurance policy of sorts. 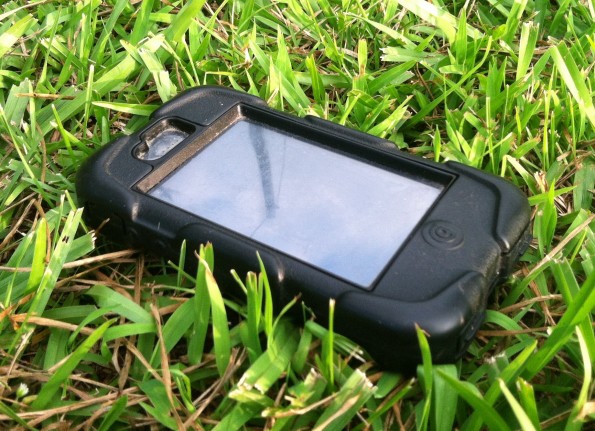 The Survivor case is designed to protect against rain, drops, wind-blown dust… just about anything you can imagine. Designed from the inside-out with “a shatter-resistant polycarbonate frame clad in rugged, shock absorbing silicone” and a “built-in screen protector,” the Survivor is purposely over-engineered to protect your iPhone against all sorts of harm.

According to Griffin, the Survivor case is military-spec, with a designation number of 810G. To help showcase how durable the case really is, Griffin created a Youtube video about two years ago featuring a couple employees doing durability “testing.” This video has gathered over 1.3 million views… it’s pretty entertaining to watch them escalate from accidentally dropping it on concrete, to slamming it against a wall and punching holes in the plaster, to finally peeling out on it in a car:

While I personally tested the iPhone 4/4s case, Griffin also makes Survivor cases for iPhone 5, iPad, iPad mini, iPod touch, Galaxy S Series, and Kindle Fire devices. They’ve also created new renditions of the Survivor, including the Survivor Waterproof, Survivor Slim, Survivor Clear, and Survivor Skin. The cases are also now available in a wide range of stock color choices, but if that’s not good enough, you can design your own custom case. With this massive selection, Griffin most likely has a Survivor case to fit your needs!

While I didn’t go through a testing process like the dudes in the video, I have done an ultra-long term test of this case. I’ve been using this case since late December 2011 until the present–an 18 month-long test. 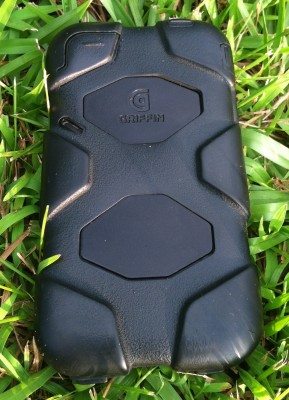 Over the course of my test, I have used my iPhone for absolutely everything. I’ve jogged with my phone while listening to music–and have dropped it while running, causing the phone to go rolling across the concrete, quite like the beginning of the video above.

During the course of those hundreds of rides and thousands of miles, I have royally abused my phone in just about every way possible (withOUT trying to actually destroy it). I have tossed it into my hydration pack and had it clanking around with my tools. I’ve crashed onto it while it was in my pack. I’ve even had it fall out of my pack while riding, and subsequently spent hours looking for it, out on the trail.

My iPhone has also accompanied me on many rides where I didn’t bring a pack. On those rides, I’d just shove it in a jersey pocket. When I would pull it out later, it would regularly be soaked, slick with sweat. Yes, that’s just kind of nasty, but the phone worked perfectly fine.

I’ve even used the phone in downpour conditions with mud on my hands. After the Cohutta 100, the case was covered with dirt and grime from using my phone while my hands were muddy, but my iPhone itself suffered no ill effects.

While this version of the Survivor isn’t intended to be completely water proof, it is water-resistant. My iPhone has successfully survived numerous rainstorms on the trail as well as having Mountain Dew spilled all over it while sitting on my desk. Not just once–but two or three times.

Despite all of this abuse, after a year-and-a-half, whenever I pull my phone out of the case, it looks absolutely pristine. In all honesty, my phone looks just as good as the day I bought it. For $49.99 (MSRP), I have had an absolutely reliable–and much more affordable–insurance policy in the form of this case. I have absolutely no qualms about my phone surviving World War Z with the Survivor encasing it!

While I couldn’t be much happier with this case, I do have one or two small complaints.

The over-built rubberized construction can be hard to get in and out of my pocket during day-to-day use, and I quickly found the belt clip wasn’t worth the effort. The rubber tends to stick to the inside of my pocket, making the phone difficult to remove. I have chalked this up as a small price to pay for the superior protection this case provides, but other people might not be so forgiving. For those people, I imagine the new Survivor Slim would be just the ticket! 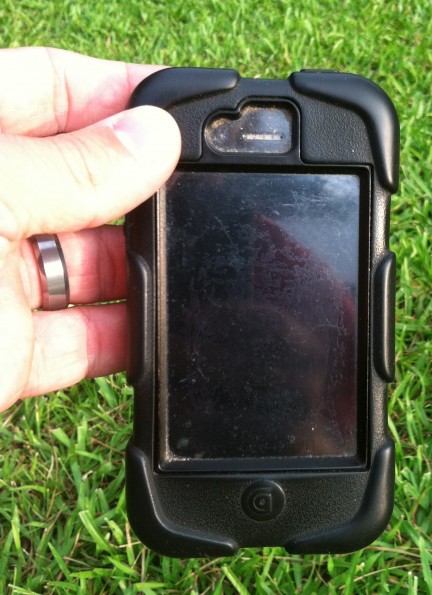 Finally, after 18 months of use and abuse, the plastic screen cover is showing significant wear. It’s grimy, and severly scratched and worn-out. The scratches are most visible along the bottom where I’d swipe to unlock, and on the right side for scrolling. The wear on the screen has gotten so bad that, while the phone is usable, in sunlight the scratches will reflect light, making the screen difficult to see.

Small quibbles aside, the Griffin Survivor has provided incredible protection for my smartphone over the last 18 months, for only $49.99. If I had to replace my case every 1.5 years, at $50 per case I would still be way ahead of the folks that are paying $4.99 per month for insurance, with a $50-$125 deductible!

If you’re looking for the perfect case to protect your iPhone on all your mountain bike excursions, you must consider a Griffin Survivor!

I’ve been using a LifeProof case lately and REALLY like it. Relatively slim, no grippy silcone to stick to your pocket, and it’s water proof, not water resistant. We went to the beach this weekend and I left it in the pocket of my trunks all day. It’s not perfect either though, the port for the charger is a little undersized, so the “stock” charging cord fits fine, but most aftermarket ones will not work.

I like where your head’s at! I just got a life proof in for review about a month ago……

I like mine. The screen protector has gotten to wear it touches the screen in one spot causing what looks like an oil slick in a parking lot…maybe I need to take the phone out and give it and the inside of the case a good cleaning with rubbing alcohol.