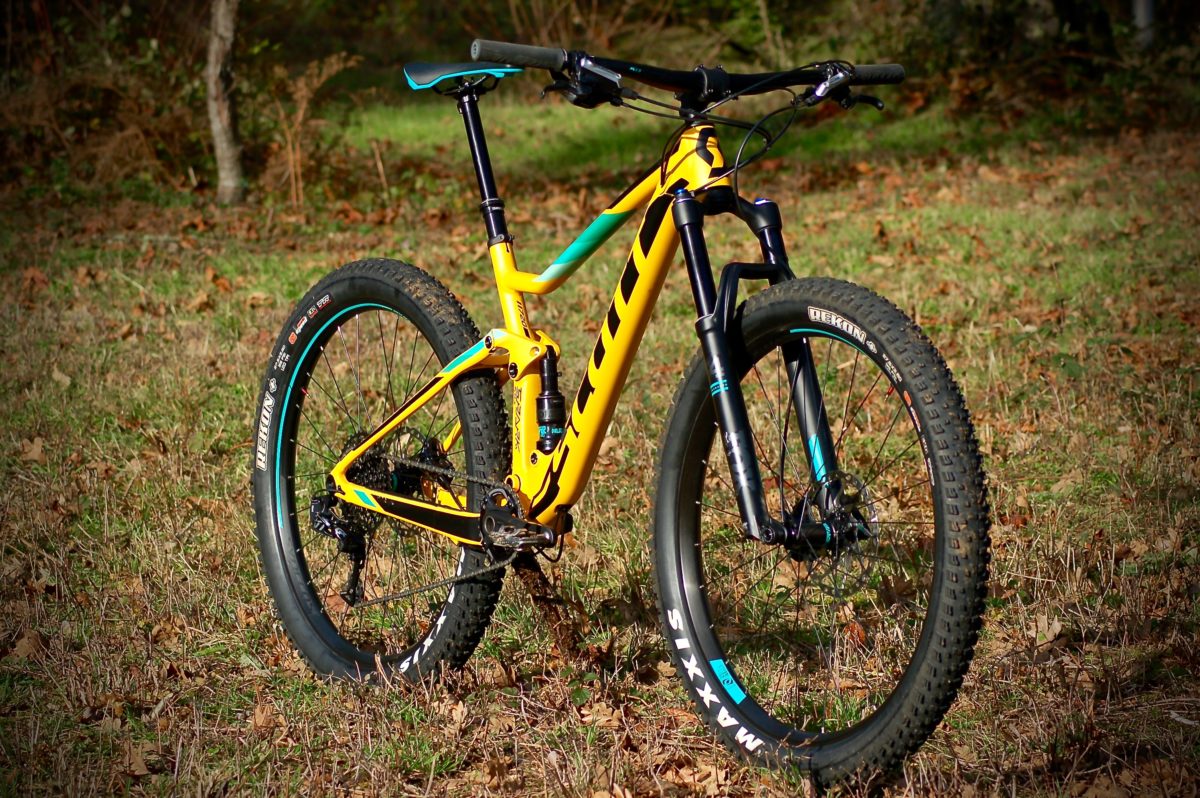 During Scott’s press camp in Crested Butte, CO last summer, our Chief Editor, Greg Heil, unveiled the latest revisions to the Scott Spark line of XC and trail bikes. Due to his affinity (and the curiosity of 99.9% of mountain bikers who’ve yet to try one) for plus wheels, Greg spent most of his time on the Spark Plus. After accusing it of “redefining the limits” of a trail bike, I was beyond stoked to take delivery of the Spark 720 Plus for a long-term review.

Bottom Line: The Spark 720 Plus is marked by an affordable, yet trustworthy, components package, up-to-date geometry and style, and a bit of innovation that’s actually worth talking about. The 720’s stout wheel and tire combo produces a heightened sense of confidence and larger margin of error for a short travel trail bike that, for some riders, will be more capable than its standard-wheel contenders. The Spark Plus is a bike that anyone can get along with for a very long time, as it clearly wasn’t a cursory effort by Scott in a plus-sized race to the bottom. 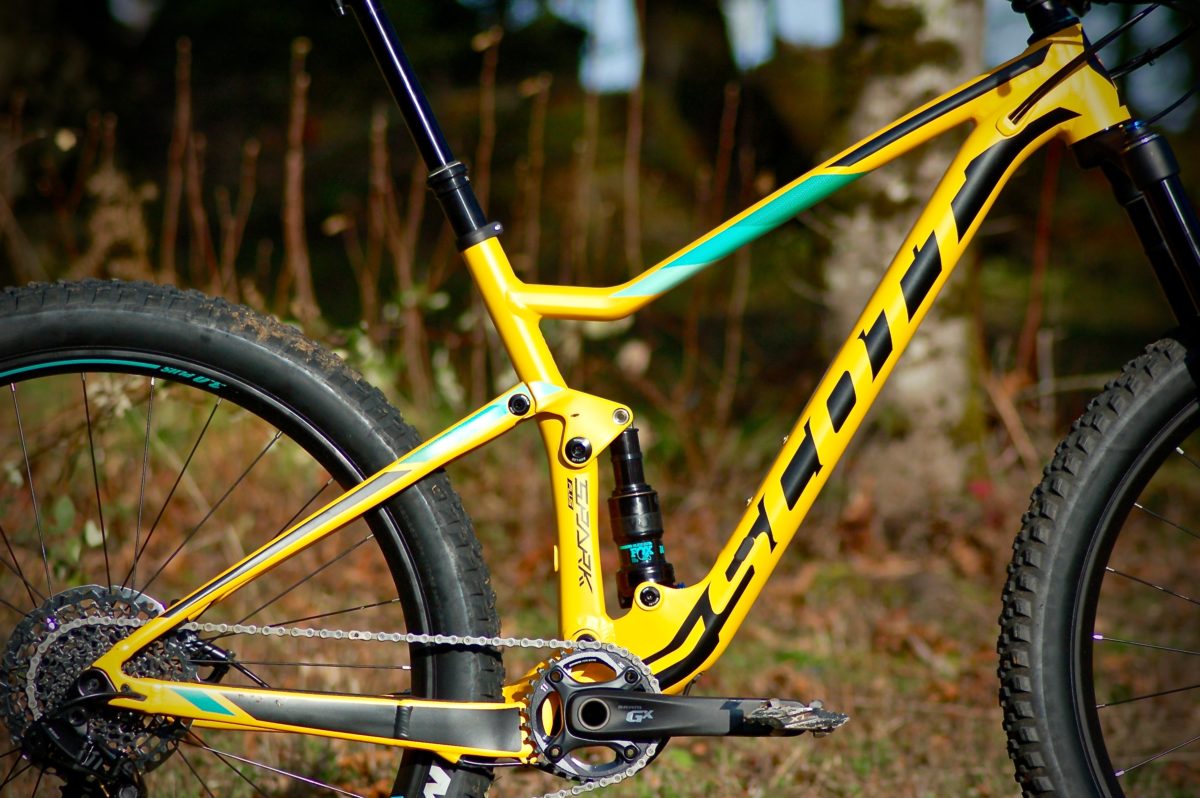 Scott’s Spark lineup starts with 100mm of travel on one of the lightest, race-ready, and winningest full suspension 29er XC mountain bikes on the market in the Spark RC.

More of an everyman’s XC bike, the standard Spark follows with 120mm of travel and no less than 24 build options, including 29″ and 27.5″ platforms and four women-specific (Contessa) frames. To close the gap between Scott’s smaller Spark XC whips and the Genius, which sports 160mm of rear travel on a 27.5″ design, Scott extended the Spark lineup with yet a longer-travel fork, 148mm rear spacing, and meaty 2.8″ tires on 27.5x35mm wheels in the all-new Spark Plus 700 series. Customers have their choice between six Spark Plus build kits (including two Contessa women’s frames) with prices ranging from $8,000 to $2,700 USD. Here, I review one yellow/black/turq Spark Plus 720, which retails for $3,699 USD. 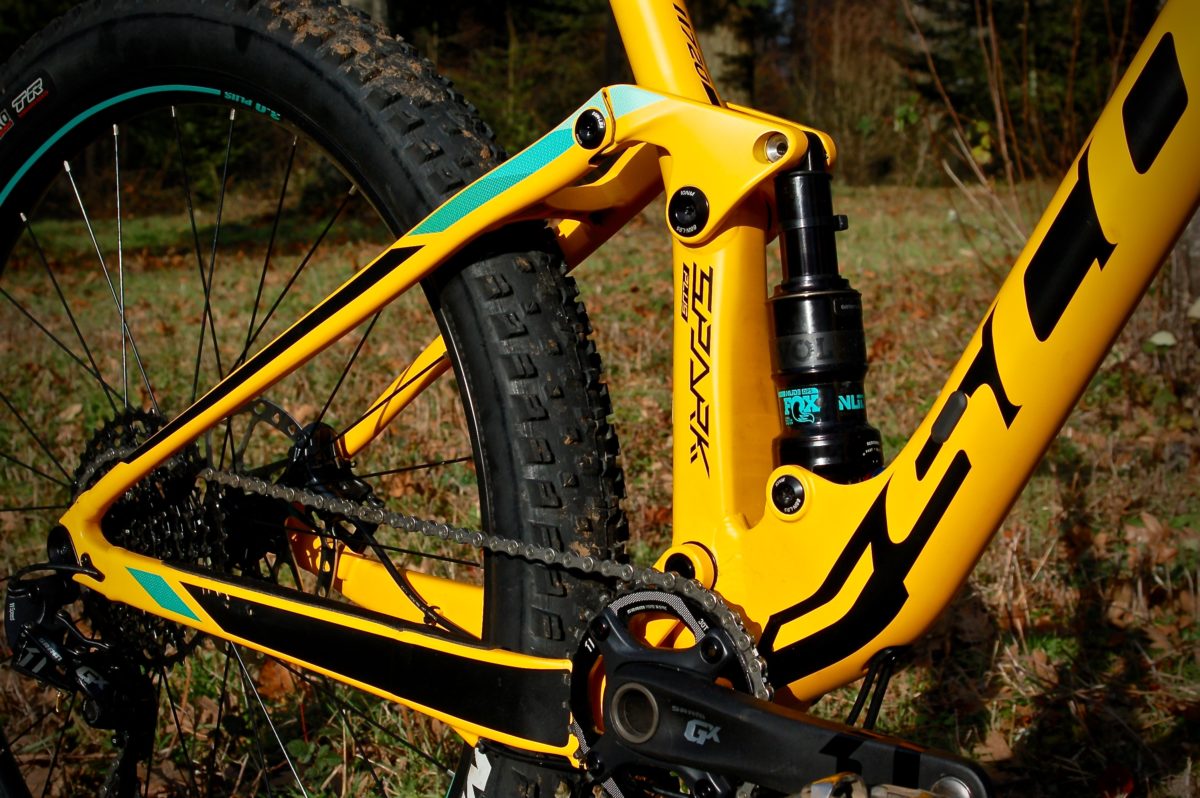 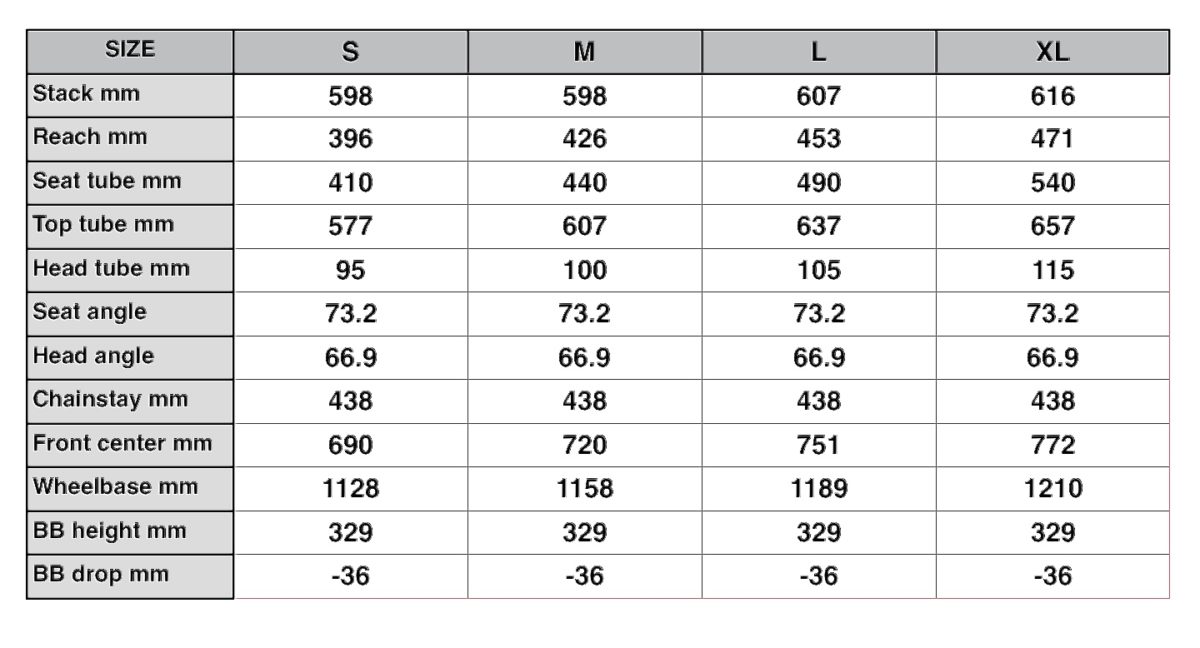 On paper, the Spark Plus geometry looks about as well-balanced as you could expect from a trail bike. Across all sizes chainstay (438mm), seat angle (73.2°), and head tube angle (66.9°) remain the same. The expected incremental changes between sizes occur in most other dimensions, including the stem, which starts at 50mm for sizes small and medium, increasing to 60 and 70mm for the large and XL sizes, respectively. The bottom bracket sits 329mm from the ground which wasn’t apparently low, until I experienced a higher than normal pedal strike count over the course of my review time. 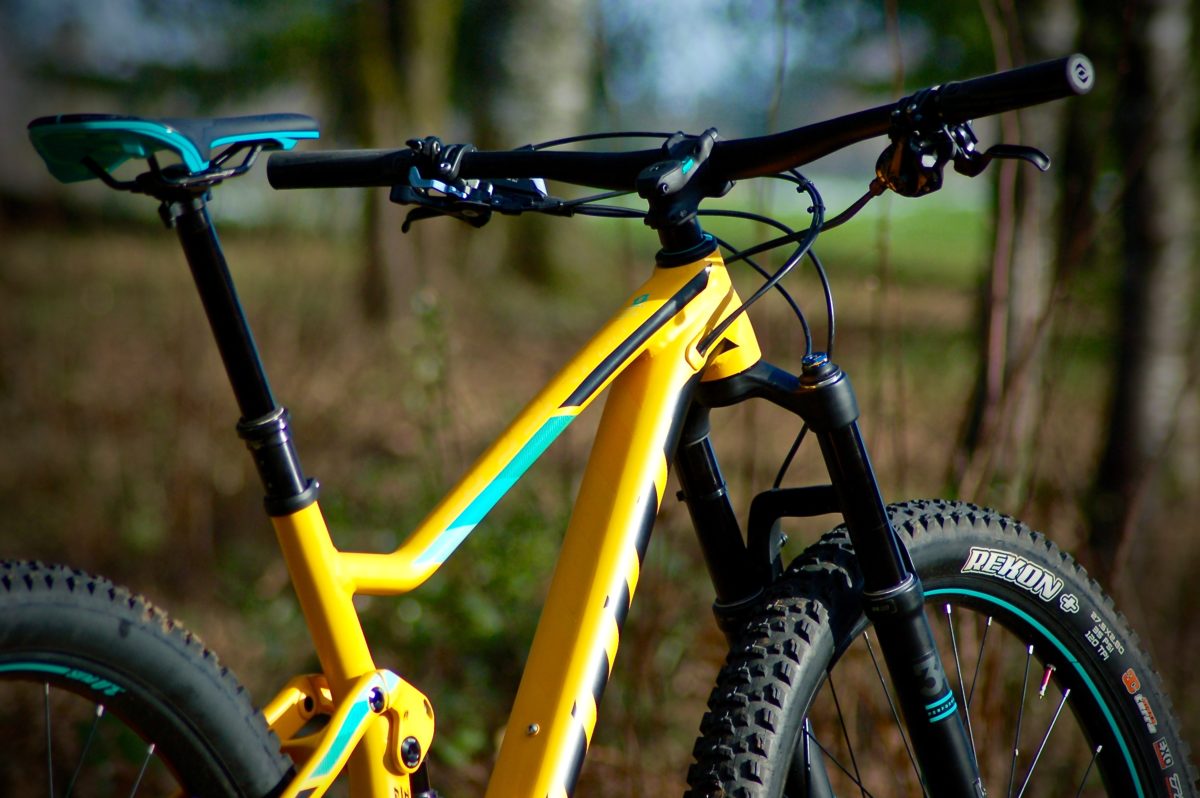 The Spark 720 Plus frame is constructed using hydroformed alloy, has a tapered headtube, press fit bottom bracket, and employs Scott’s own Fox Nude shock to actuate the rocker link-driven solid rear swing arm in an effort to achieve a stiff, lightweight frame. The complete Spark Plus weighed in at a respectable 29 pounds (tubeless, without pedals). Internal routing ports at the head tube accommodate up to five individual housings, and exit points are located on the underbelly of the down tube, at the distal end of the drive side chainstay, within the seat tube for internal seatposts, and along the side of the down tube if you choose to run a side swing front derailleur.

Scott has adopted metric sizing for their Fox-manufactured Nude shock and has also taken advantage of a trunnion mount, in which hardware inserts through the shock body instead of a separate eyelet. The trunnion mount increases shock stroke by 7mm (45 vs. 38mm) over their previous 190mm eye-to-eye shock, making better use of frame space and design to provide a cleaner and more compact look, lower standover height and center of gravity, and clearance for bottle cage mounts within the front triangle.

As a linkage-driven single pivot, the Spark’s pedaling performance relies on a well-tuned shock, but also benefits from Scott’s TwinLoc remote system which simultaneously adjusts shock and fork damping from a single lever situated at the left grip. The two extra cables required to perform this magic creates a bit of a cluster at the bar, but I was ultimately won over by the ability to alter suspension behavior at the flick of a finger. This on-the-fly actuation is also made possible by the Scott/Fox Nude tech featuring two internal air chambers that, depending on TwinLoc toggle, offer three settings: a larger volume allowing more sag and a slacker position with more available travel (Descend Mode); a smaller volume, shorter travel, less sag, and a steeper, more agile geometry (Traction Mode); or full-lockout (Climb Mode). 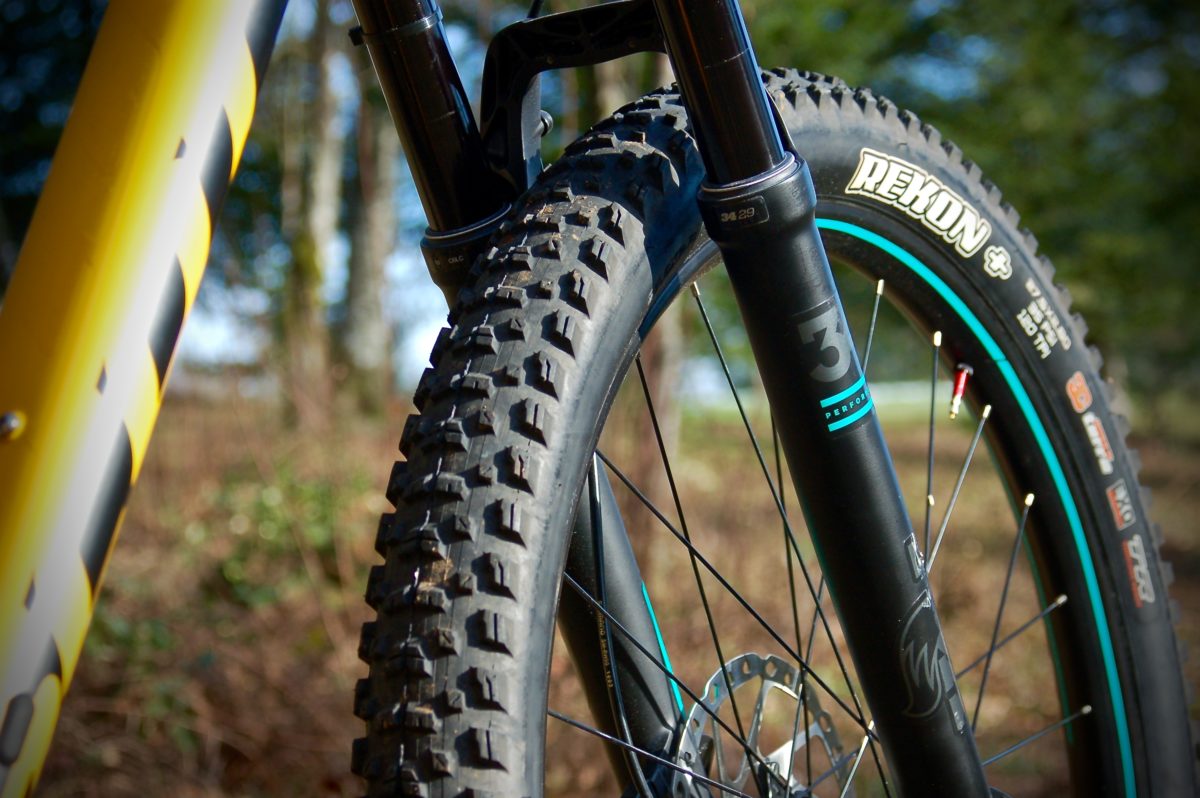 Consistent with the mid-level price point, the Spark 720 Plus build features mid-pack components more concerned with a combination of price and durability than bling and weight, including a Fox Performance 34 Boost (110x15mm), SRAM GX1 1×11 drivetrain, and Shimano M615 hydraulic disc brakes. Scott’s house brand, Syncros, supplies the headset, stem, bars, and a less-than-comfortable saddle. For the dropper, Scott chose the Fox Transfer, and it may be noteworthy that the 720 is the lowest-tier bike in the Spark Plus family where a dropper is included. Syncros was also employed for wheel duty with 35mm-wide, 28-hole rims laced to Formula hubs with 2.8″ Rekon rubbers from Maxxis. Scott makes no mention in regards to 29er wheel compatibility for the Spark 720 Plus, but does state so for their Genius Plus line. 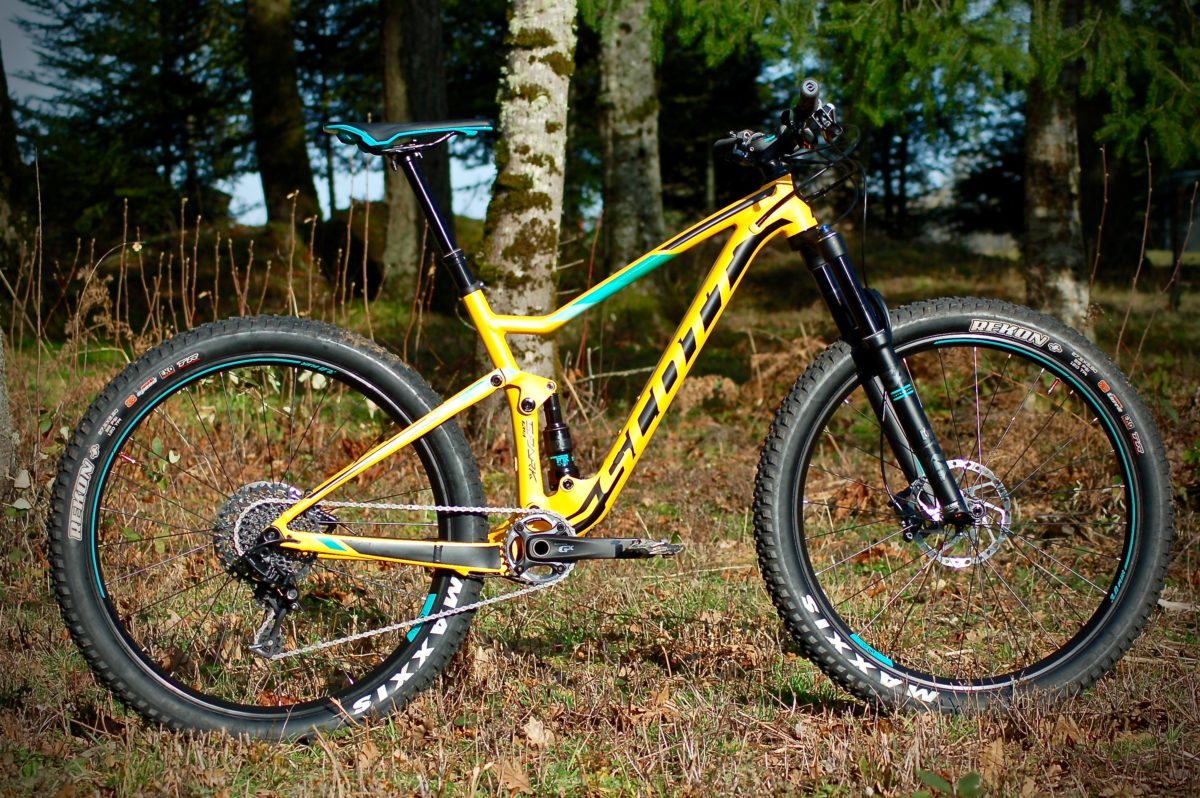 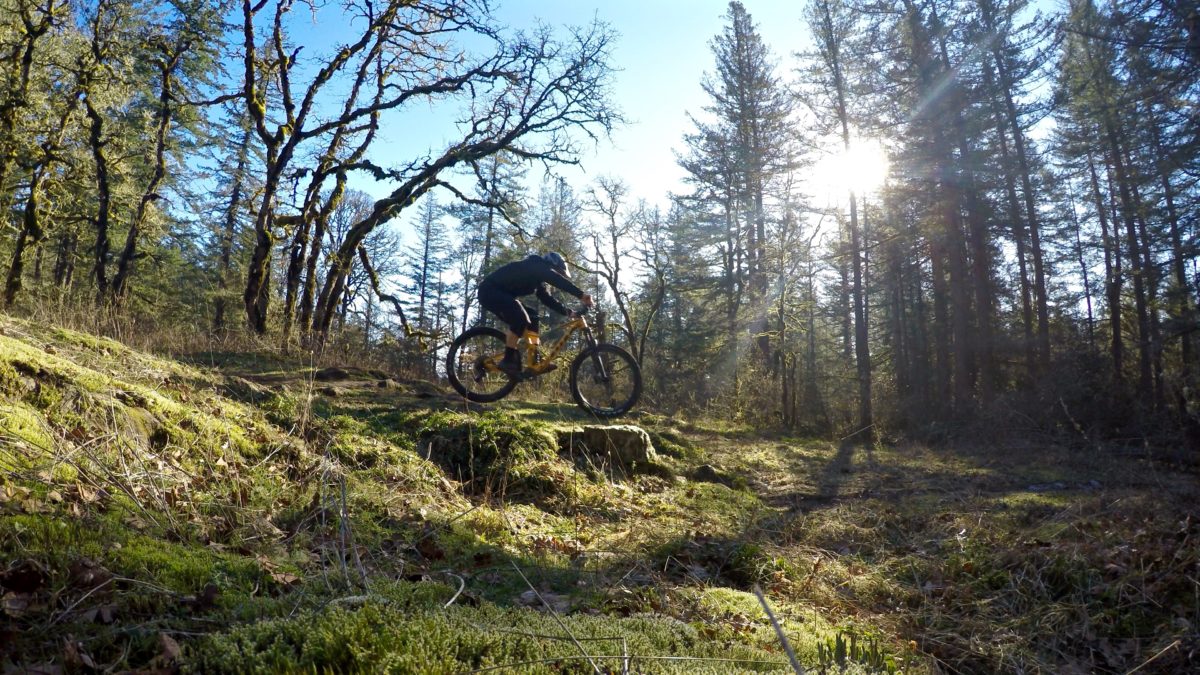 Riding the Spark 720 Plus

While most of the excitement regarding a full suspension plus bike revolves around wider tire options, it would be a mistake to overlook Scott’s chosen suspension platform for the Spark. While a single pivot is by no means innovative and often lost in the hype and gimmickry of four-bar virtual pivot designs, Scott’s use of a robust, yet compact bell crank coupled with a solid rear triangle attached inferiorly to the down tube results in a relatively lightweight, maintenance-friendly, and stiff rear end. Any lateral play on the Spark Plus would be the sole responsibility of tire choice and pressure (more on that below). 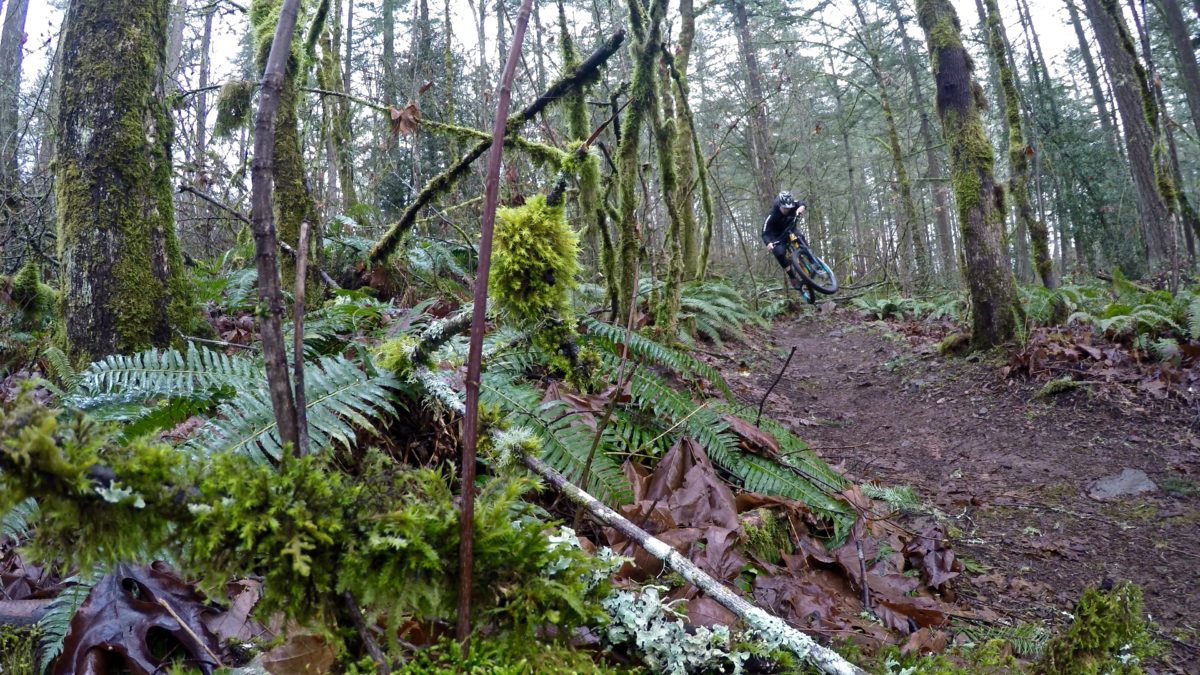 Although simplicity and reliability rule the world of single pivot, pedaling efficiency with this type of design is highly dependent on the Fox Nude shock tuning, which is enhanced by the two important features: a trunnion mount fitting more shock into less space (see explanation above) and Scott’s TwinLoc remote, enabling on-the-fly shock damping. Save for long fire road climbs, I found little reason to lockout the suspension, and even during seated singletrack climbing, the Spark is composed, demonstrating little pedal bob. Where the Spark 720 Plus suffers is during standing sprints with the shock in Descend Mode. While four bar linkage platforms usually skirt these energy-sapping effects by design, the Spark’s efficiency is back on track with one click of the TwinLoc lever, dropping rear travel to 85mm while simultaneously damping fork suspension. 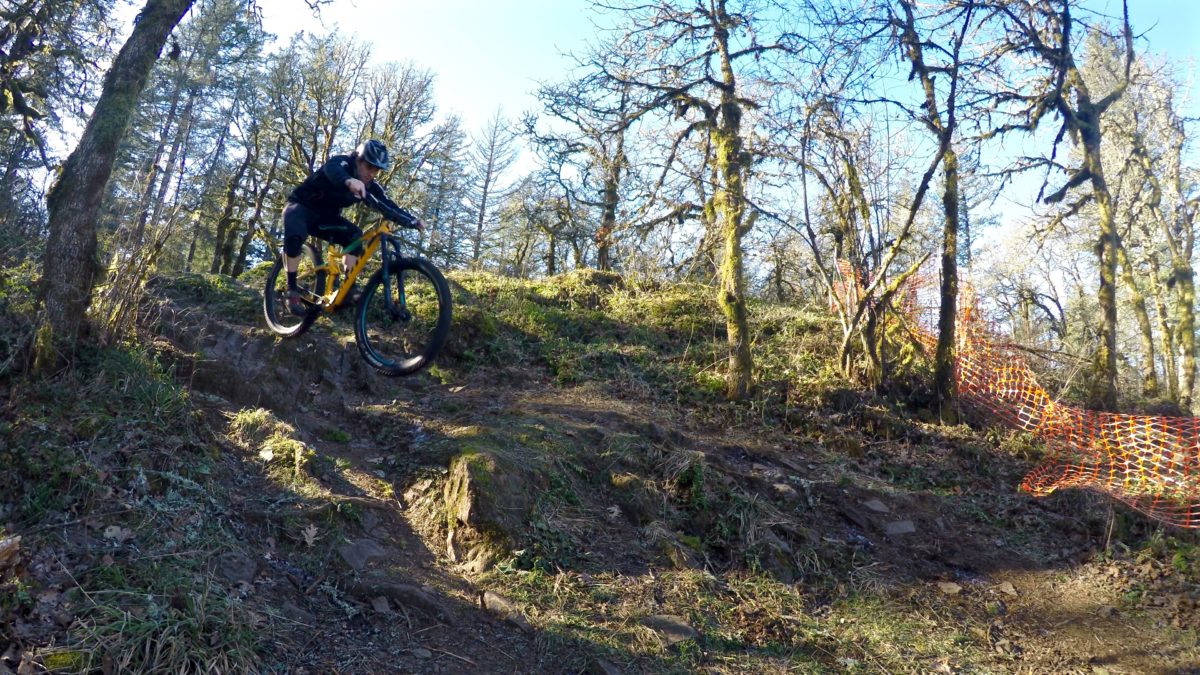 If there’s one thing I’ve learned about plus bikes, it’s the compromise between superior traction and the increased rotational weight furnished by, in this case, 35mm-wide wheels and 2.8″ rubbers. I liken this tradeoff to that of longer travel bikes: while they won’t win any hill climb race, a long-travel bike will get you to the top only so you can rage back down. And that’s exactly what the Scott Spark does. With a reliable Fox Transfer dropper post, a 50mm stem atop modern frame geometry (including a bottom bracket as low as most enduro sleds), and tire pressures in the mid-teens, the Spark 720 feels enormously planted on fast, wide-open terrain, while maintaining nimbleness through tight, repeating corners. I would later swap the Rekon+ tires for a set of burlier 3.0″ Terrene Chunk tires, which further enhanced the Spark’s traction and propensity to get rowdy. “All this fun,” I thought, “on a 120mm-travel bike.” 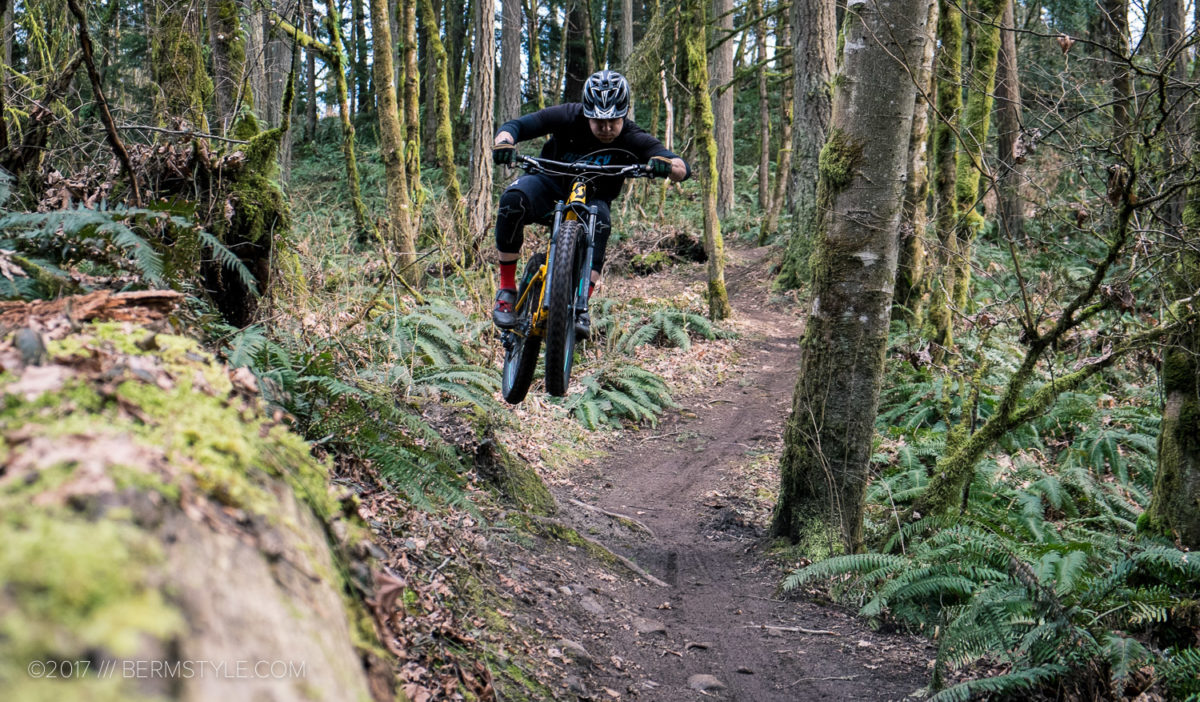 While not necessarily inherent to the Spark Plus alone, rather a characteristic among many a full suspension plus bike, is a battle between the damped and undamped. Much consideration goes into shock configuration (setting sag, rebound, etc.), yet little can be done to tire performance outside of selection and pumping air into a tubeless setup. At 14-16psi in the set of Maxxis Rekon+, traction is ever-present on the Spark Plus, but the acclaimed stability of a 2.8-3.0″ tire on 35-40mm-wide wheels still creates an undamped squish that seems to fight a carefully-tuned suspension under certain scenarios. This unruly feel was most often perceived from the rear end when plowing through chunk, pumping groomed flow trail, or during hard cornering–basically whenever I needed to drive weight through the bottom bracket in search of traction. As predicted, this tire squirm would dissipate as I increased tire pressure, but you must decide where to cut off increases in psi before diminishing the key advantage to the larger tire–traction! A mistake overlooked by plus-size engineering, or a just another compromise accompanying evolving standards? 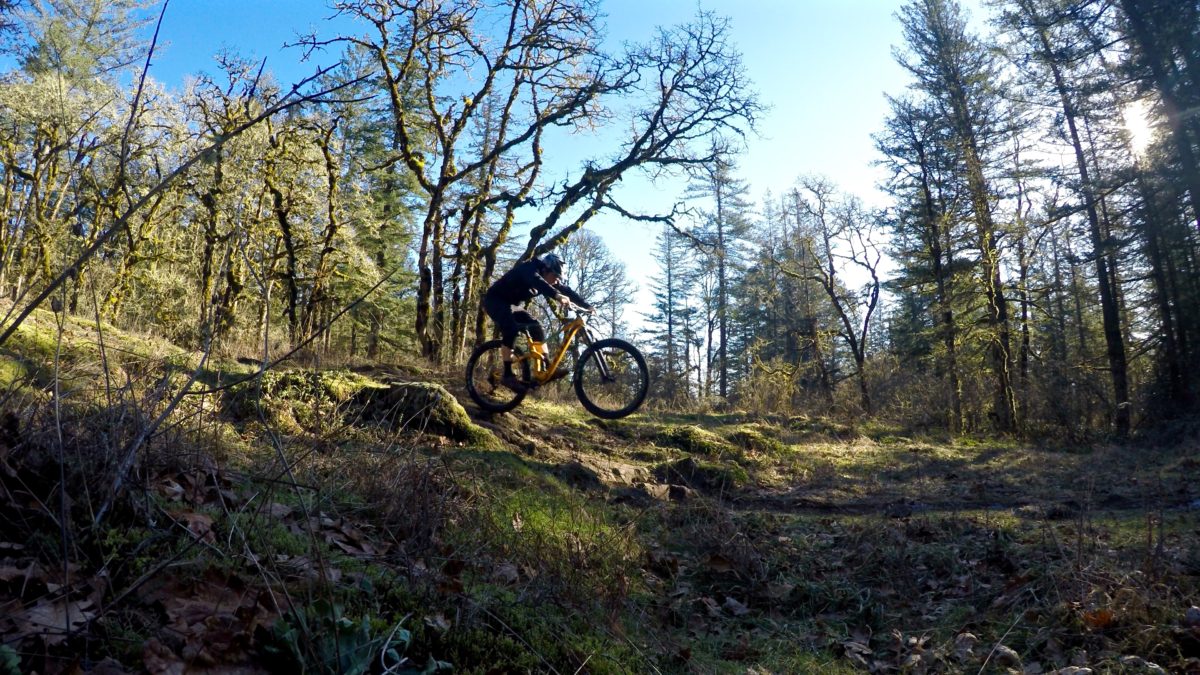 It seems so rare to get a mid-level build in for review with such high-end tires, and for the set of Maxxis Rekon+, I thank you Scott! What’s more, you likely won’t find yourself running out to drop additional cash on cockpit bits, as the stock Syncros 760/50mm, handlebar/stem combo is one with which most can be happy. Fox’s Transfer Performance post performed flawlessly, feels light at the lever, and, other than Kashima Coat, appears to be no different than its bigger brother, Factory.

As we wait for The Eagle’s span to wrap its wings around entry level lineups, SRAM’s GX drivetrain with a 42-tooth big cog coupled with a 30-tooth ring has proven to be quite the capable group lately, and was so throughout my time on the Spark.

With 180mm rotors (front and rear), Shimano’s M615 brakes were always ready and willing when I was, despite steep descents on heavy hoops.

A bike’s contact points are always an easy target and while I wouldn’t last much longer on the Syncros saddle, I was pleasantly surprised at the comfort and durability of the lock-on grips from the same manufacturer. 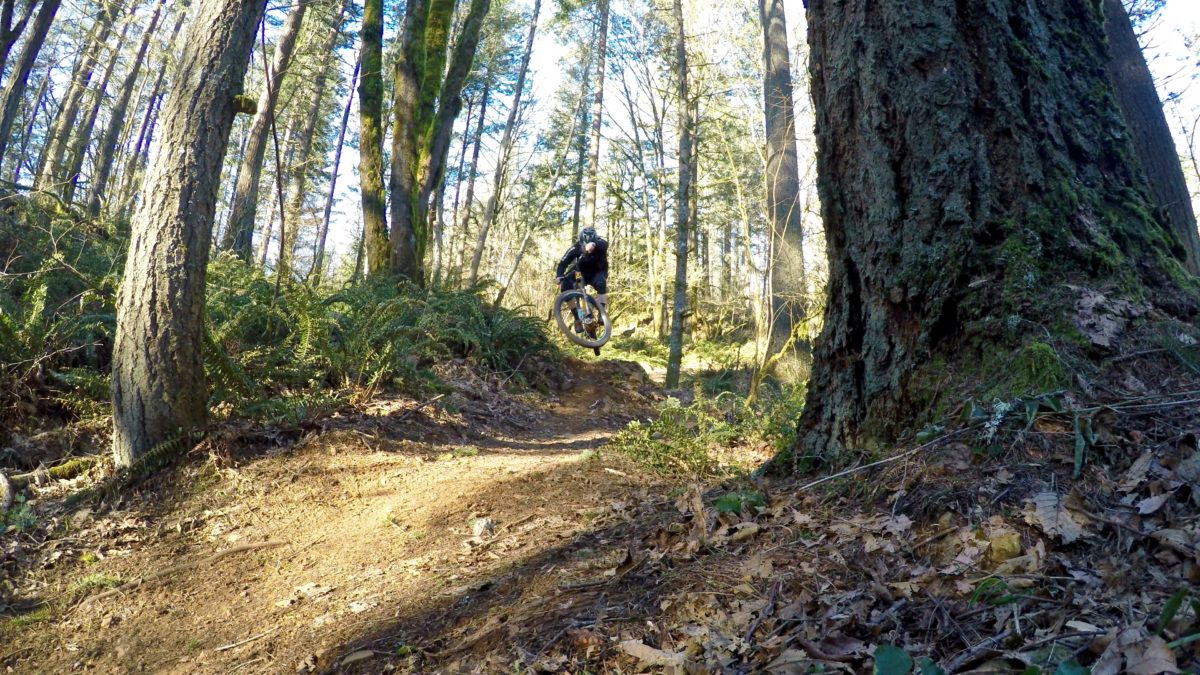 After a few muddy months throwing the Spark Plus around, it’s clear this wasn’t a cursory effort by Scott in a plus-sized race to the bottom. The 720 build is marked by affordable, yet trustworthy components, up-to-date geometry and style, and a bit of innovation that’s actually worth talking about. Although shock options are severely limited, the suspension platform is more than capable for most trail applications with the added bonus of being one of the most compact designs available.

On to the next page for bonus photos.

Gear
Mountain Bike Tire Repair Tips: From Emergency to Semi-Permanent
Gear
Never Underestimate the Power of a Good Zip-tie
Gear
The Maxxis Minion DHF Tire is Still the One to...
Gear
These MTB Deals are Fire, including 40% off Patagonia Dirt...
Subscribe
Login
Please login to comment
2 Comments
Most Voted
Newest Oldest
Inline Feedbacks
View all comments

I have this in my top 5 on my next bike list. If 2.6″ tires were swapped for the 2.8″, would that take care of the too much odd squish feeling you described?

Hi, Nice post! Can you tell me how much room was left on the back with the 3.0 inch tires?