Camelbak claims the new Palos reservoir-based waist pack is the first designed specifically for mountain biking. This comes as a surprise to me, especially since I’ve been wearing waist packs, or as I like to call them, fanny packs, for a few years now. But come to think of it, none of the reservoir-based packs I’ve worn were MTB-specific; they were all designed for general cycling or even trail running. Does designing a butt bag with mountain bikers in mind really make a difference? After testing the Palos, I’ve decided the answer is “yes.” 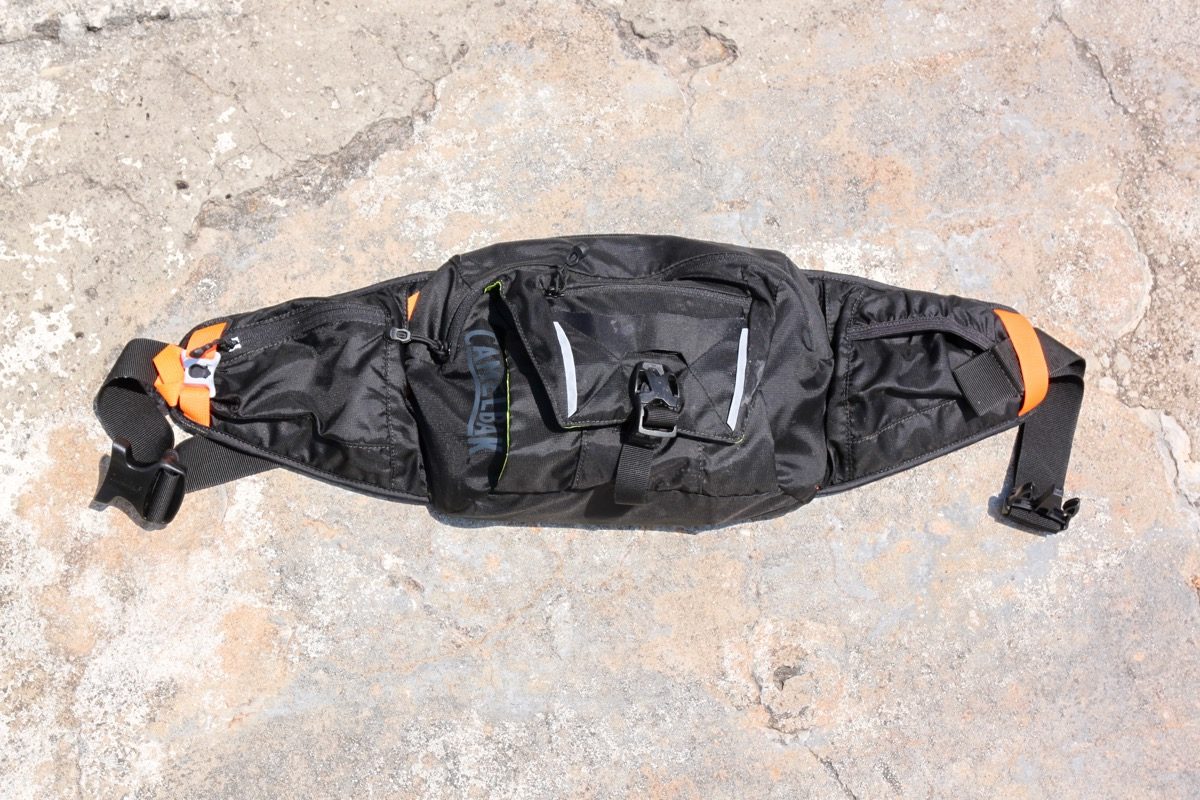 The Palos is not the first waist pack from Camelbak. In fact, I’ve been wearing the company’s FlashFlo LR waist pack for a couple years, and while it’s worked really well for me, it was never designed with hardcore mountain biking in mind. The Palos, by contrast, adds features like a strap for soft body armor and an easy-access tool roll. Two small zippered pouches for snacks or energy shots have been added to the waist belt as well. 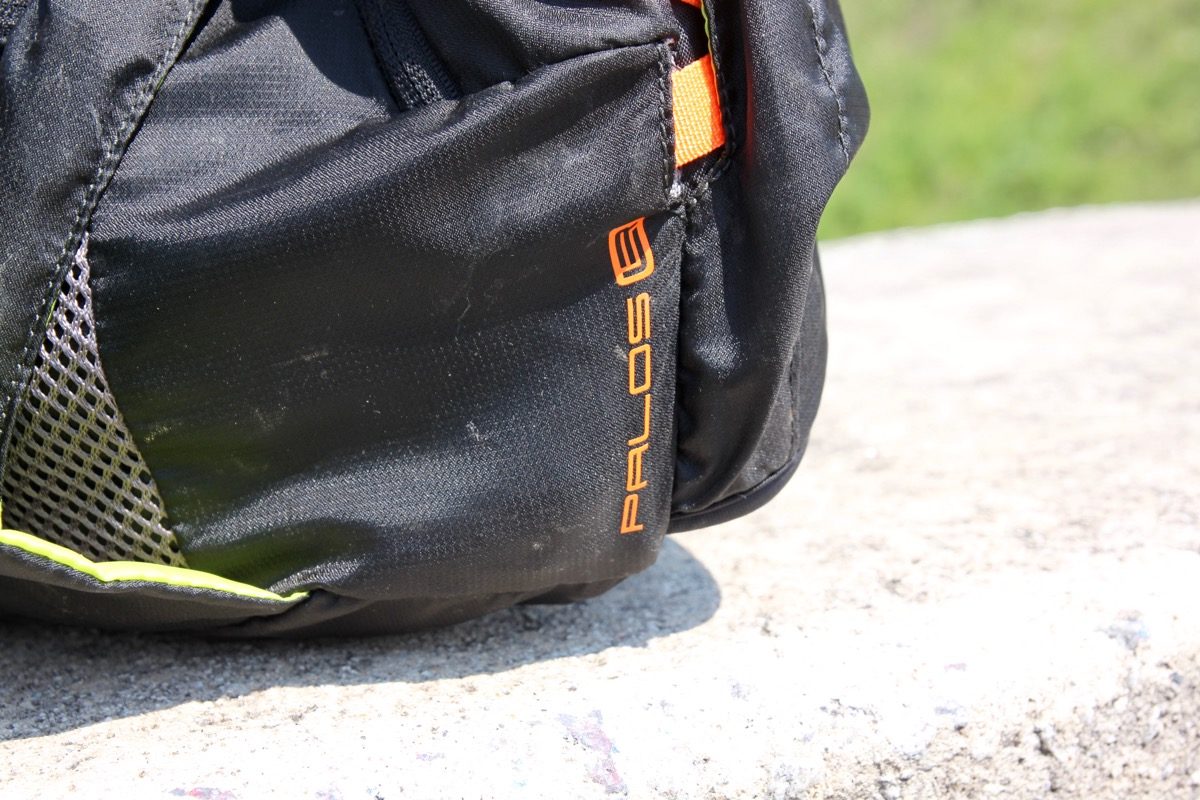 The Palos name actually pays homage to a local trail in Oakland, CA by the same name, though the more well-known Palos in Chicago was my initial guess. Either way, it’s fitting that this pack is named for an after work ride where a pack like this could come in handy. No, the Palos isn’t meant for embarking on an epic backcountry adventure, but it is well-suited to after work rides and suburban, weekend warrior duty. 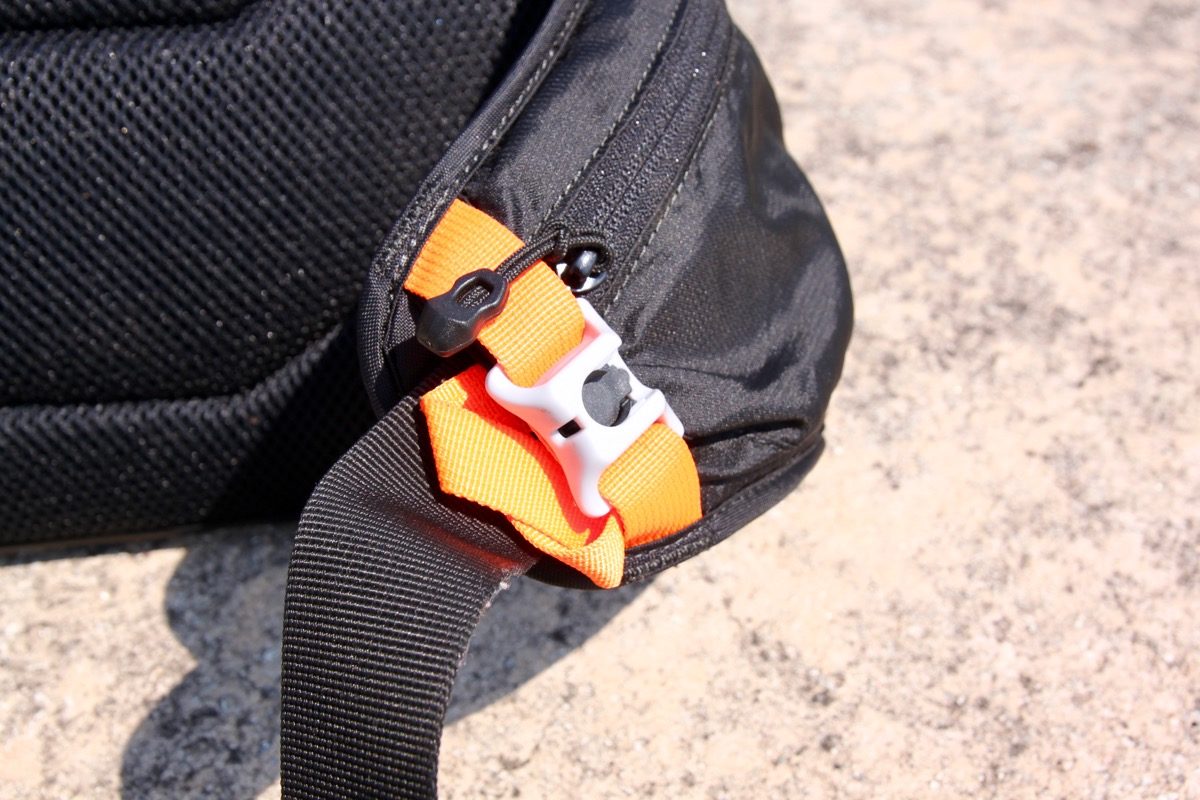 Like the FlashFlo LR, the Palos includes a 1.5L reservoir with a magnetic clip on the hose to keep hydration within reach. Personally I prefer to carry water in bottles attached to my bike frame, so I immediately ditched the reservoir, which freed up more room for gear. With the reservoir the pack has about 150 cubic inches of storage space, and removing the reservoir adds another 90 cubic inches or so.

With all that space, I can fit my DSRL camera with a big lens plus tools, snacks, keys, phone, and a pair of arm warmers. Without the camera, there’s room for an extra layer, plus knee warmers too.

Beyond adding special straps, zippers, and pouches for MTB-specific items like tools and body armor, the Palos offers improved comfort and stability on the trail. Other waist packs on the market have narrower waist belts that tend to allow the pack to roll up and down when the trail gets bumpy. By contrast, the Palos waist belt is wide, which has the side benefit of distributing belt tension and reducing the tendency of the belt to dig into the stomach and waist. 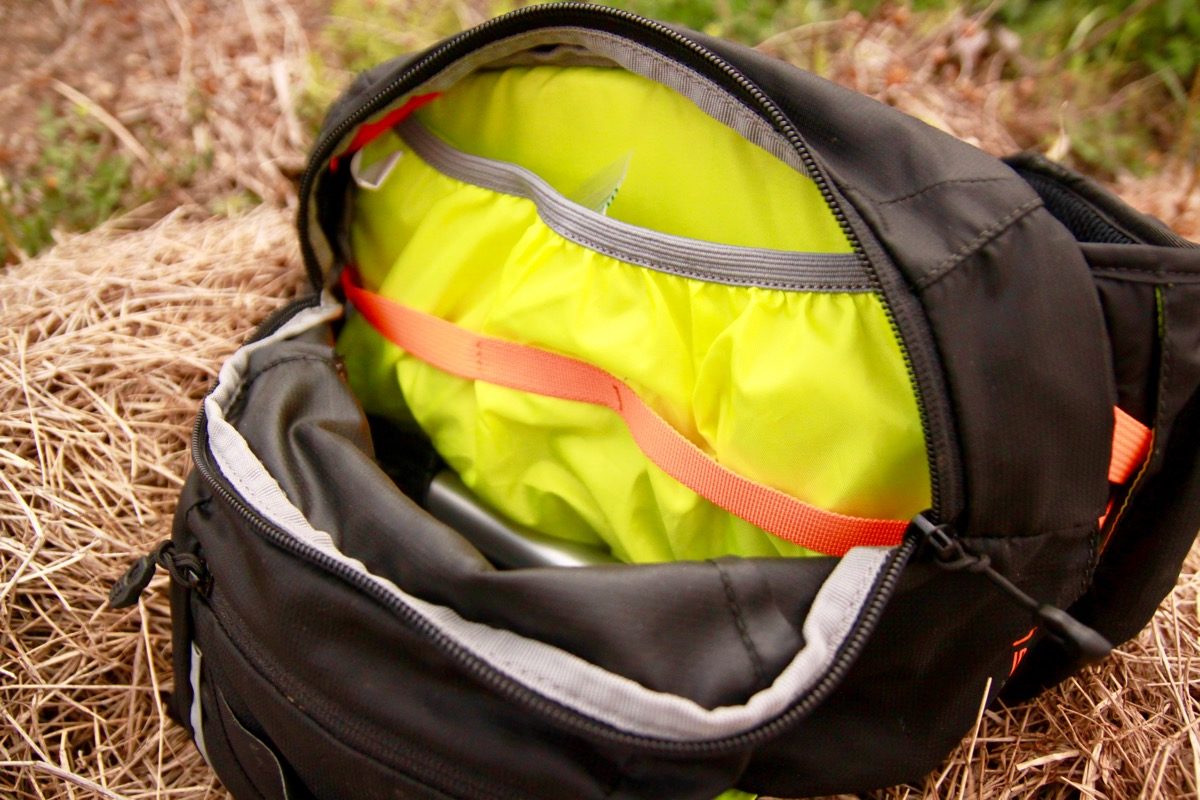 The Palos pack is slimmer than other waist packs on the market, going for a tall, rectangular shape instead of a fat, squarish one. This does make it slightly more difficult to fit certain items like DSLR cameras and cans of liquid refreshment, but for squishy items like extra layers, the change is minimal. The upshot is that weight is kept close to the rider’s body rather than hanging out and bouncing in the wind.

After wearing the Palos for a couple months now, I can confirm that it is indeed more comfortable and stable than any of the other fanny packs I’ve worn. All of the buckles, closures, and materials used on the Palos pack ($70 USD) are top notch, as one would expect from a company like Camelbak. The pack is lightweight and looks great too.

It’s clear that Camelbak took a fresh approach to the waist bag with the Palos, and the result is a bag that feels great on the trail while offering mountain bike specific features like a tool roll and soft body armor storage. While this pack isn’t going to take you into the backcountry, it’s a great option for after-work and suburban rides.

Thanks to Camelbak for providing the Palos waist pack for review.

Gear
Never Underestimate the Power of a Good Zip-tie
Progression
Sizing Up or Down Plus Handlebar Widths and Crankarm Lengths:...
Gear
These MTB Deals are Fire, including 40% off Patagonia Dirt...
Gear
The Maxxis Minion DHF Tire is Still the One to...
Subscribe
Login
Please login to comment
2 Comments
Most Voted
Newest Oldest
Inline Feedbacks
View all comments

Me too MP. This might really “fit the bill” for me for my shortest rides.