I spotted something totally new and unexpected at Outerbike this year: a full suspension fat bike from Turner, dubbed the “King Khan.” Mtb-mag.com reported on the 24th of September about a supposed “prototype turner fatbike,” but if the bikes I saw rolling around at Outerbike are any indication, the King Khan is anything but a prototype. For one thing, there were quite a few copies of the King Khan heading in and out of the venue, constantly being demoed by the rabid fat bike fans and new converts alike. For another, this bike is totally dialed, as my ride experiences can attest. 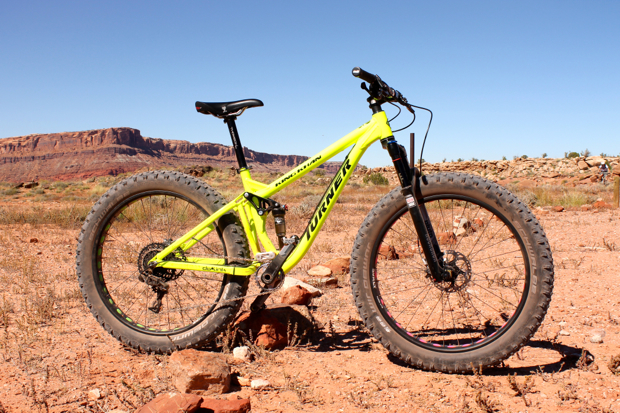 While the King Khan still isn’t listed on the Turner website, I’d hazard a bet that it’s going to be in production pretty soon–if it isn’t already. As a result of the lack of official information I can’t provide details on the final build kit and pricing for this bike, I can relate the build that my test bike featured. The bike I rode was built with a SRAM XX1 drivetrain, high-end Magura brakes, Schwalbe Jumbo Jim 26×4.00″ tires, Surly Marge Lite rims, a RockShox Bluto fork, and Fox CTD rear shock. 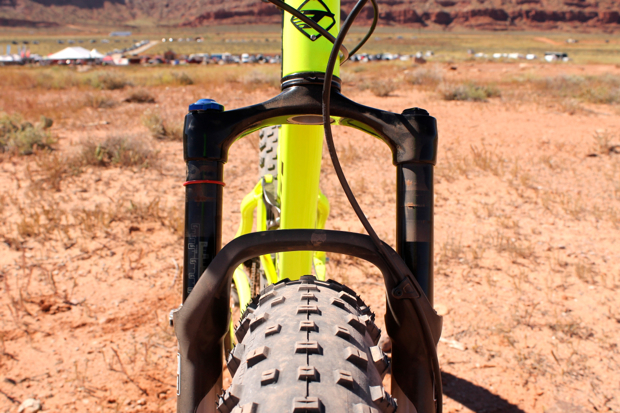 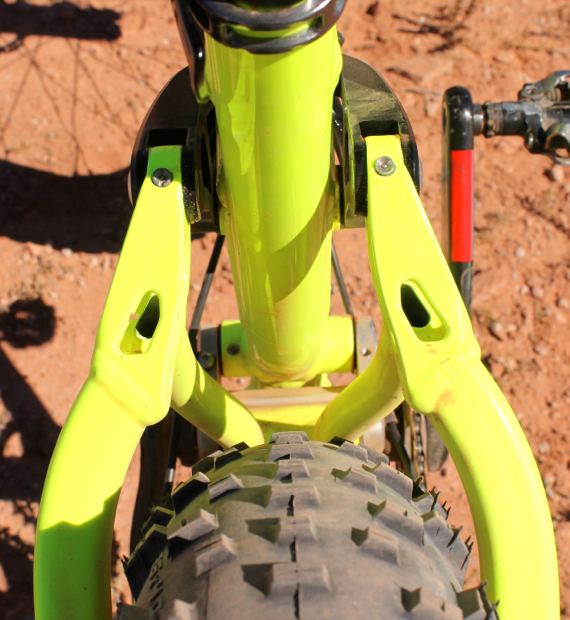 This was my first time riding a full suspension fat bike, or a fat bike with any suspension for that matter. Until I swung a leg over the King Khan, I couldn’t really relate to Jeff’s rave review of the RockShox Bluto, his conversion to summer fat biking, or his assertion that the Salsa Bucksaw was “was easily the best bike I’ve ridden this year.” But once I experienced a full suspension fat bike for myself, all of a sudden it clicked. 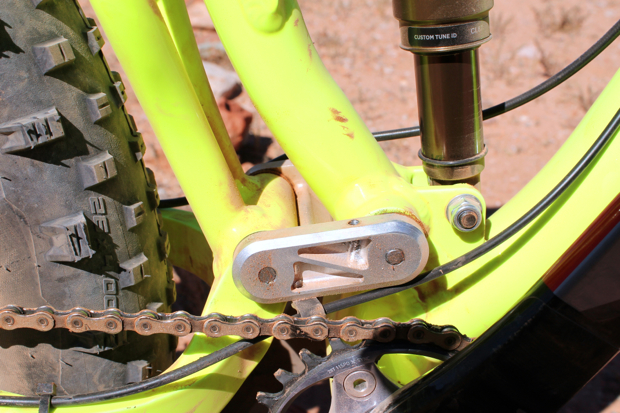 I began my test ride by playing around with the handling and the suspension, being new to the whole FS fat bike scene. With the RockShox name on the fork, I don’t know why I thought the Bluto would handle or feel any worse than a normal fork–it went squish just like I should have expected. And the rear end features a standard Fox CTD shock, so I don’t know why I expected anything different there, either. These aren’t jury-rigged parts that were cobbled together to create a full suspension fat bike. Instead, these are purpose-built components with detailed engineering and testing that are designed to handle well–and they do.

As I got rolling into the loop, I played around with jumping and cornering on the King Khan. Yep, everything worked great, and with exceptional fat bike traction. As the trail progressed, I got held up behind some slow riders–as I did on pretty much every single loop. Oh, the joys of riding short circles in the desert with 800 of your best friends. 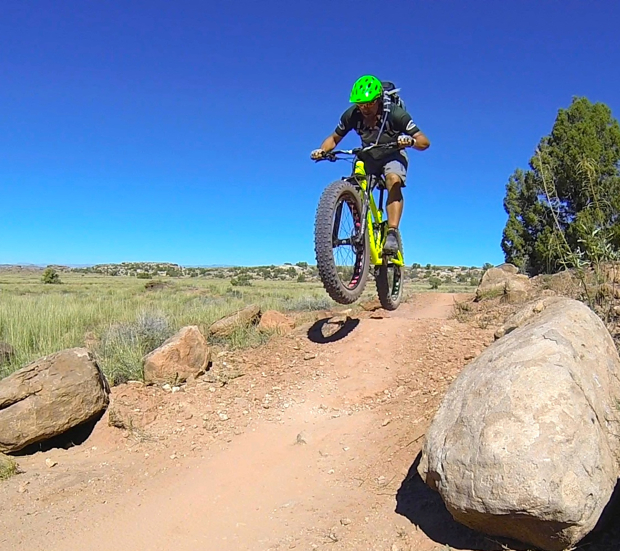 On the one section where the trail opened up to a 4×4 road before diving back into the singletrack 100 yards later, I swung out fast to the right to pass, flying downhill and dropping the hammer. My passing zone featured a big rock garden, so I launched off of an upraised rock ledge lip, gapping out about 15 feet over the rest of the rock garden, passing my slow-pedaling trail obstacle in mid air.

As I kept my acceleration going, railed back into the singletrack, and blasted through some S-turns, I suddenly realized: I had forgotten I was riding a fat bike… and I mean that in the best way possible. None of the bad qualities that some fat bikes exude–heavy weight, gyro effect from the wheels, poor cornering–were present in the King Khan. Instead, I was just focusing on riding fast, having fun, catching air–pretty big air, at that–and railing through the corners. And I was doing it all on 4″ tires.

In fact, I think there are some serious benefits of rolling on the big tires versus your normal skinny treads. For one, the traction is superb, and can tackle all sorts of loose sand and rocks–which places like Moab have in spades. Secondly, and maybe even most importantly, technical rocks and features just disappeared below the King Khan. Jeff already wrote about this, but I finally got to experience it for myself. Simply put, all of the rocks and rock gardens started to look and feel smaller as I got a feel for what the King Khan could handle. This full suspension fatty smoothed out everything in sight… honestly, it felt like cheating somehow. I felt a little guilty for how easily and carefree I could tackle trail obstacles. Mountain biking is supposed to be challenging, isn’t it? Well, with the King Khan, you can still be challenged… you’ll just need to find technical rock gardens and massive trail features that you may have never dreamt of riding before! 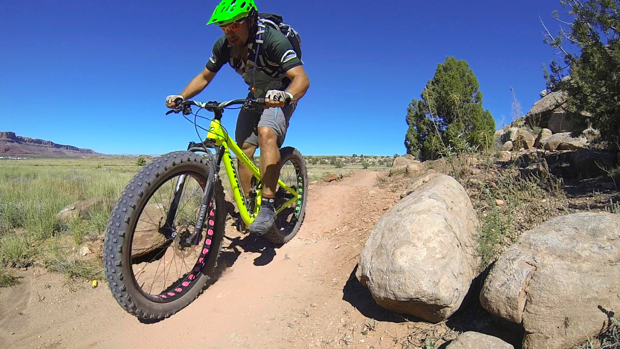 After experiencing how natural and how fluid of a ride the King Khan provided, I think we need to stop talking about fat bikes VS the rest of the world and start talking about “mountain bikes,” and just focus on whether or not the bike in question rides well. Sure, we’ll always discuss the different benefits and costs of a certain bike, but with rigs like the Turner King Khan, Salsa Bucksaw, and Borealis Echo entering the market, the line between “fat bike” and “mountain bike” is disappearing. These are all great-riding bikes, and ultimately what you use the bike for is up to you.

Community
News: Race a Fat Bike in NC Without Freezing Your...
Gear
On Review: Norco Sasquatch
Gear
The Diamondback El Oso Dos is all the Fat Bike...
Gear
REI Co-op Brand adds an Affordable Fat Bike to the...

Excellent review! I hadn’t heard about this bike but it looks and sounds really dialed which is awesome. Love the name too.

Fat tires are kinda like magic on the trail and I agree, it’s not fair to say a fat bike isn’t a mountain bike or even that it’s a special type of mountain bike. One of the key specs we talk about with FS bikes is how much travel they have and I would argue that the next most important spec is the amount of tire clearance. I want to know how wide I can go!

Speaking of going wide, definitely stay tuned for my review of the Ibis Mojo HDR and Ibis’s new 41mm rims.

My daughter and I also rode this bike, and it changes everything we thought we knew about fat bikes. I was amazed at how fast I could push it, especially in places where I’d normally be concerned with sliding out, and climbing technical obstacles definitely felt like cheating!

The guys in the Turner booth said they have taken to calling the King Khan an ATB (All Terrain Bike).

Yes! I made this same comment in my Motobecane On Test article. In the old days, people were calling our sport ATB but the bikes at the time didn’t really live up to that moniker. I think the new breed of fatbikes finally makes the idea of an all terrain bike a reality.

I’m not usually a fan of Turner aesthetics, but that is one sweet looking bike! For some reason, that Turner style seems to look better sitting on those fat wheels.

Okay so we need to arrange an opportunity to ride the King Khan, Bucksaw, and the new Foes fully fatty all side by side.

Sounds like fun to me! And don’t forget the new 9zero7 fatty.

For all you gents who have ridden the Bucksaw as well as the King Khan: which one should I get? I am an average to advanced rider, currently riding a Stumpjumper FSR EVO 29. I am not interested in snow riding, just sandy, rough terrain in the high country while on adventure trips. Also, is carbon worth the extra $$? Thank you for your time. Tom

Hi Tom, unfortunately I haven’t personally ridden the Bucksaw yet… but I really want to! Jeff has ridden it, and he loved it. To be honest, many of the specs seem similar between these two bikes, although as you mentioned the Bucksaw is now coming in carbon. If you have the money to go carbon, I’d personally go for it… should be a sweet rig!

I have purchased the Bucksaw, I have not ridden the King Khan yet.
So far i have put about 100 miles on the bike, I love it, It is a different experience that you have to ride one to understand.
Like fat tired bikes, sand, snow and mud are not an issue to get through. You just peddle through everything. You stay in the saddle where you may have gotten out while riding a hard tail.
The only thing i have noticed is that since you are peddling all of the time, that every once in awhile i will brush a peddle across the ground. This usually happens in rolling terrain.
I ride a size small frame, which may or may not make a difference.
I would highly recommend a test ride. This type of bike is not going to be for everyone. You can go fast, but the build up of speed is slower, once you get there it is fairly easy to hold however.
I do not see that carbon is going to be worth the extra money, i purchased the bucksaw 2, which does not have the dropper post and has the dual front derailer.
This was perfect for the type of riding that i planned on doing.

Thank you for the input, Subnormal. I ended up buying the Bucksaw 1 and so far I really like it. I am just a bout to head to southern TX and can’t wait to use it on some of the sandy trails.