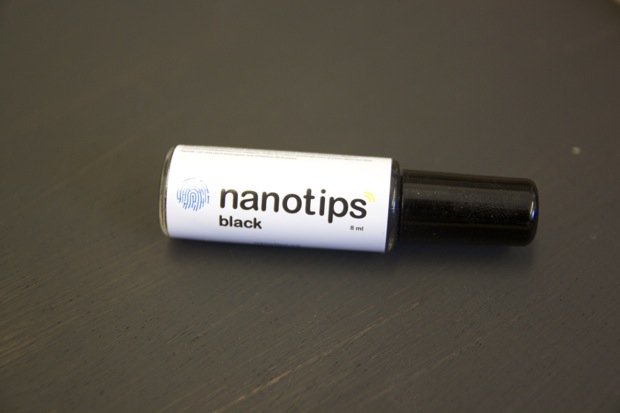 I use my iPhone on the mountain bike trail all the time, but that usually involves taking my gloves off to even get past the lock screen. Smartphone touch screens and most gloves just don’t go together. And that’s why Nanotips exists.

Nanotips started life on Kickstarter where the goal of raising $10,500 was blown away with $72,000+ in contributions. Clearly a lot of folks felt the need for a product like Nanotips.

There are a couple other ways to get around the bike glove / touch screen issue: wear fingerless gloves (not as comfortable IMO) or buy a pair of bike gloves that are touch-screen compatible. That second option isn’t as readily available as you might think, and even when it is, the glove fit might not be exactly what you’re looking for. Nanotips is for folks who like the gloves they’re currently using, but want to bring the gloves up to 21st century standards.

Nanotips is a liquid that can be applied to the finger of any glove to make it compatible with touch screen devices. It’s simple to use: just shake the container to make sure it’s well mixed, paint it on the finger(s) you want to use with your device (it even smells like nail polish), and dry with a hairdryer.

I found the process to be fairly simple, though I learned a couple things along the way. First, drying with a hairdryer is critical–and it takes longer than the 2-3 minutes suggested in the instructions. If the liquid isn’t dry when you first try to use it with your device, you’ll end up with goop all over your screen (though it does come off). It’s also important to use the correct Nanotips product–Nanotips Black is for thick glove materials while Nanotips Blue is meant for knit materials. Nanotips Black went on smooth as butter on the fingertip side on my Answer Fall Line gloves but on the sides and top, the more breathable knit material didn’t get a good coating.

Nanotips recommends covering your treated glove fingers from knuckle to tip and to get the sides coated as well for optimal results. I didn’t realize how much of my finger I used for swiping and typing on my phone but clearly it’s much more than just the tip. 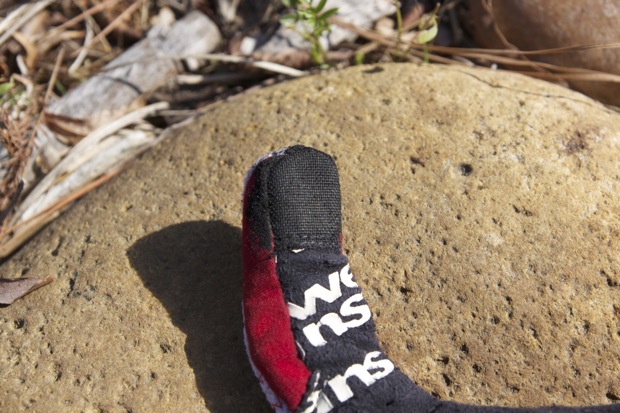 Once my gloves were treated, they worked like a charm with my iPhone. Admittedly, my accuracy suffered a bit with gloves on, but the upshot is every touch was registered correctly as if I was using my phone barehanded. If your gloves are any color other than black, the application may look a little messy like mine, but function over form, right?

A package of Nanotips Black costs $20 and can treat about 30 glove fingers. The coating is said to last at least a couple months, though that will depend on usage and conditions. The Blue version treats slightly fewer fingers, and each application won’t last as long as the Black.

With the successful Kickstarter campaign completed, Nanotips are now available for purchase at nanotipgloves.com.

Thanks to Nanotips for providing this sample for review.

This is a pretty ingenious solution to an annoying, everyday problem. I dig it!

Yeah…I wish it lasted longer..but I love the concept and think I’ll be looking around for some as my gloves are hit or miss even with a factory phone friendly application. Maybe they should just make smartphones more mountain bike friendly? Waterproof, shockproof, hi rez camera, GoPro Sync, and voice activated phone/shutter app. Anyone want to go in for another Kickstarter idea? 🙂