Ever wonder what MAVIC really means? Well, it’s actually an acronym for Manufacture d’Articles Vélocipédiques Idoux et Chanel. That name came about in 1889, which is pretty far back, as you can imagine.

Since I’m not one for going too far back in history, fast forward to today and we have a company that has been around for well over a century and has come up with a ton of innovative products for the cycling industry.

This year is no different. At Interbike, Mavic decided to go low key this time round, inviting specific dealers and media instead of the general public. We had the privilege to sit down, have a great breakfast, and go over some of the new gear for Mavic. 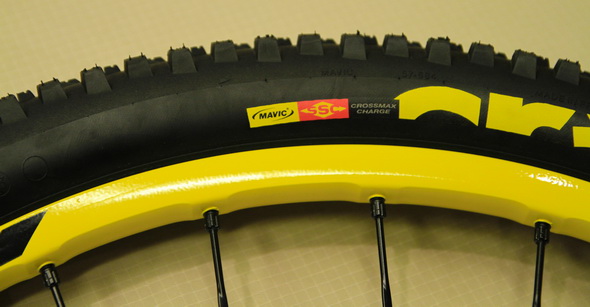 The big thing for Mavic is what they like to call “System Integration.” It has already been happening on the road side of the company, and is now filtering onto the MTB side. According to Zack Vestal (Mavic PR guy extraordinaire), they are looking at each component and grouping them together as a system. No longer is Mavic stopping at just the wheel, but they’re taking that added step and designing a tire to match perfectly with the wheel and its function.

Mating a specific tire to a rim has a few key advantages. For one thing, the tire is now made exactly to fit the rim, making it easy to mount, and more importantly providing a perfect profile for tire retention and sealing.

The other big deal is tread pattern and compound, which of course isn’t very new to the tire market in general. However, Mavic designed the front tire around a 2.4″ carcass with a high grip front tire and a 2.3″ rear tire maximized for power transfer. 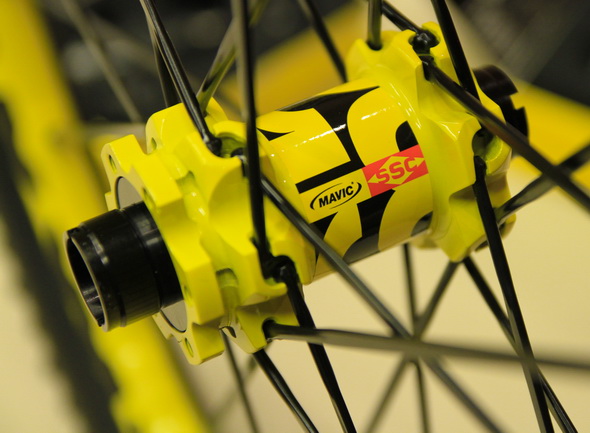 Now I only had a chance to take a look at some of the gear (wheels and shoes), but you can see is that Mavic, true to their name, is keeping the famous SSC and yellow on their top tier gear.

Pictured above was the new Crossmax Enduro wheelset, available in 26″ or 27.5″. They tip the scales with a total weight of 3610g (or 1710g wheels only) for the 27.5″, and a weight of 3460g for the total weight of the 26 inch versions. Overall, the weight was kept down to a minimum while strength, stiffness, and response were kept as high as possible. Mavic tackled each wheel with a different approach, using a 21mm cross section for the rear and a 23mm cross section up front. 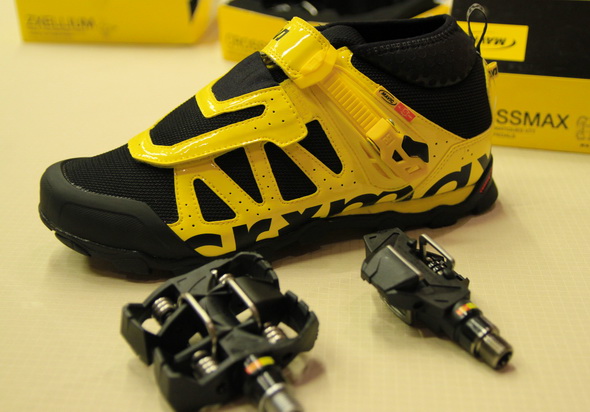 Another example of integrating things as a whole are the pedals and shoes. They haven’t tried to hide it, but essentially what Mavic has done is team up with Time to produce and brand their pedals. According to Zack, both companies share the same business philosophy and goals. Working together on the pedal project made sense, especially since both companies are only 2 hours away from each other in France. Consequently the pedals share the ATAC retention system, which separates foot angle and retention from spring tension, keeping pedal reaction consistent.

Two new lines of pedals, the Crossmax SL and XL, both provide you with a choice of a lightweight, efficient pedal or a more robust, oversized-bodied XL. There are two pedals in each range, with carbon bodies and Ti axles on the top versions, while the next step down uses CroMo axles and carbon bodies. Both pedals carry the SSC designation. For all you weight weenies (me), the Crossmax SL Ti comes in at 241g, the SL at 284g, the XL Ti at 330g, and the XL at 375g. This is pretty cool, considering that other pedals can easily eclipse 450g. 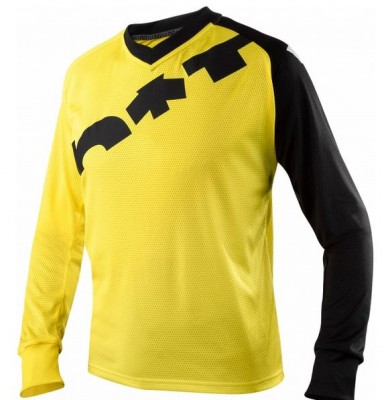 The Mavic goodness doesn’t stop there! With an expanded offering of high-tech wear, you can find trail wear, as well as race wear. The expanded Stratos and Notch lineups look pretty cool. Notch has 4 colorways to choose from, with the logo as shown on the right, to solid colors of green, blue, or red.

The new Notch helmet comes in at 310g, has 18 vents, and a compact micro adjustable strap. 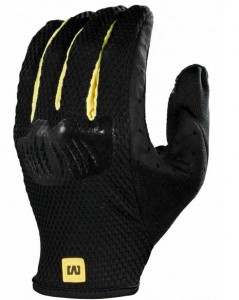 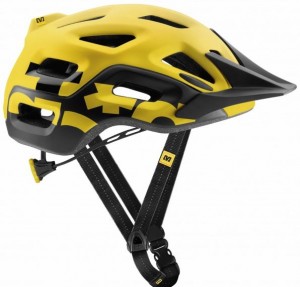 Progression
Sizing Up or Down Plus Handlebar Widths and Crankarm Lengths:...
Gear
These MTB Deals are Fire, including 40% off Patagonia Dirt...
Gear
Never Underestimate the Power of a Good Zip-tie
Gear
The Maxxis Minion DHF Tire is Still the One to...
Subscribe
Login
Please login to comment
7 Comments
Most Voted
Newest Oldest
Inline Feedbacks
View all comments

Mavic is actually French for ‘unreliable hubs’. That being said, they make some crazy good products even if they are jaundiced.

Did you have a set that failed on you? If so which ones. And could you describe what happened. I am interested and I am sure the folks at Mavic would be interested to know…

Maybe one day Mavic will catch up with the rest of the MTB world and offer some wider rims.

Quoted sizes were inside bead to bead numbers (where it really counts).

Looking at the Enduro wheels at Interbike, they hold their respective tires well with a good tire profile..

Oh okay, that’s good then, I assumed those were the outside measurements. It seems like this is the year that both Mavic and DT Swiss are finally getting onto the wider is better bandwagon. DT has several new rims coming out that look really nice.

Ouch, no love for Mavic here. I’ve been testing the Enduro helmet and it’s great. I also love my wheels but then again I’m not running super beefy tires.

I haven’t personally used their shoes, but I love how they look and the styling and design behind them.