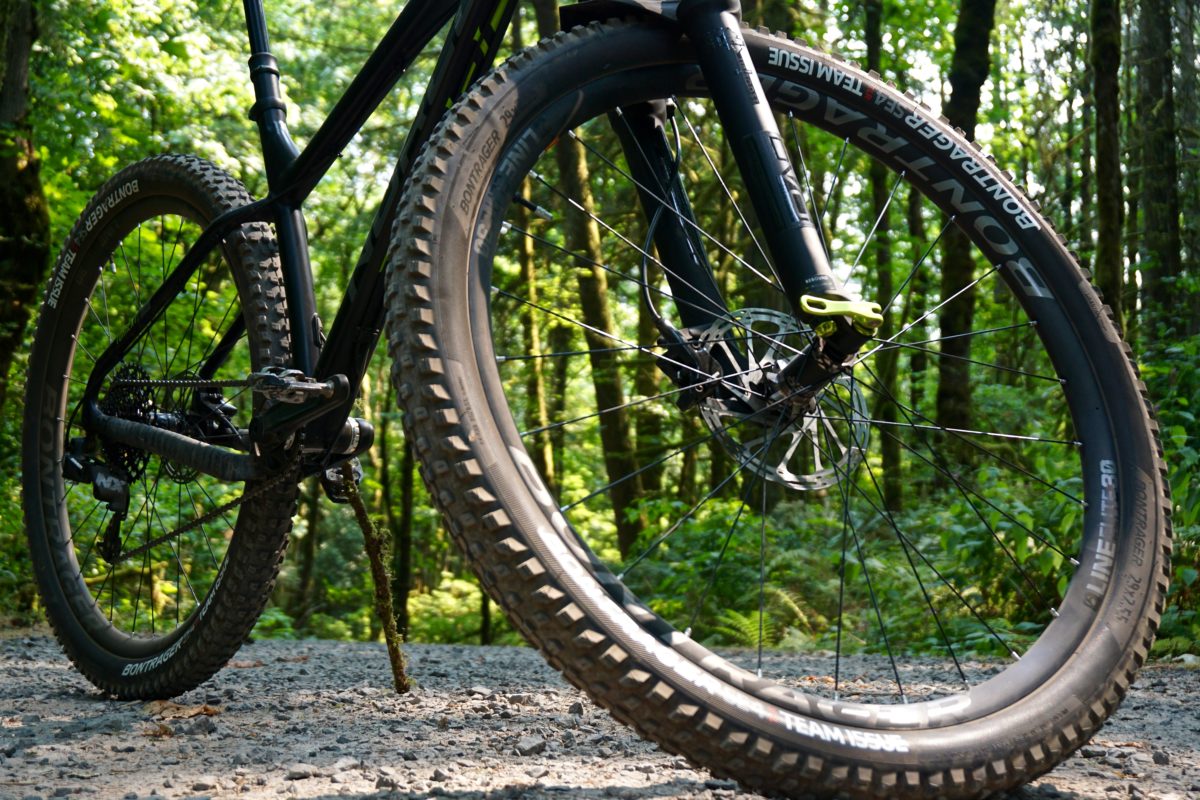 Bontrager made a splash earlier this year with the introduction of their Line Pro carbon wheels, featuring an extremely competitive price point — $1,200 for a complete set! Along with that announcement, the Trek-owned component maker laid out an entire spread of new hoops from 23mm-wide XC to 30mm enduro. To boot, Bontrager MTB wheels are now sporting some of the fastest hubs on the market while still maintaining a budget-minded approach.

Although this review is confined to the aluminum Bontrager Line Elite Boost version in the 29″ diameter, the Line Elite 30 is also available in 27.5″, as well as non-Boost for both diameters.

As its name suggests, Bontrager’s Rapid Drive 108 rear hub offers a whopping 108 points of engagement. Using six offset pawls within a 54-tooth drive ring, a near-instantaneous design provides engagement every 3.3° of pedal stroke. That’s almost as fast as Industry Nine’s hubs (engagement every 3°) and faster than Chris King — hubs that cost almost as much as a complete Line Elite 30 wheelset.

Bontrager employs 28 double-butted DT Aerolite spokes in a “stacked” arrangement on both the front and rear hubs. The hub flanges have seven fin-shaped segments — each drilled twice — to accommodate two straight-pull spokes with opposing insertion points. Per Bontrager, stacked alignment optimizes the bracing angle to make the wheel stiffer. 28 spokes is a little low for my comfort level, but the stacked lacing coupled with a wider rim and Boost spacing might be the ticket to compensate for a lower spoke count. 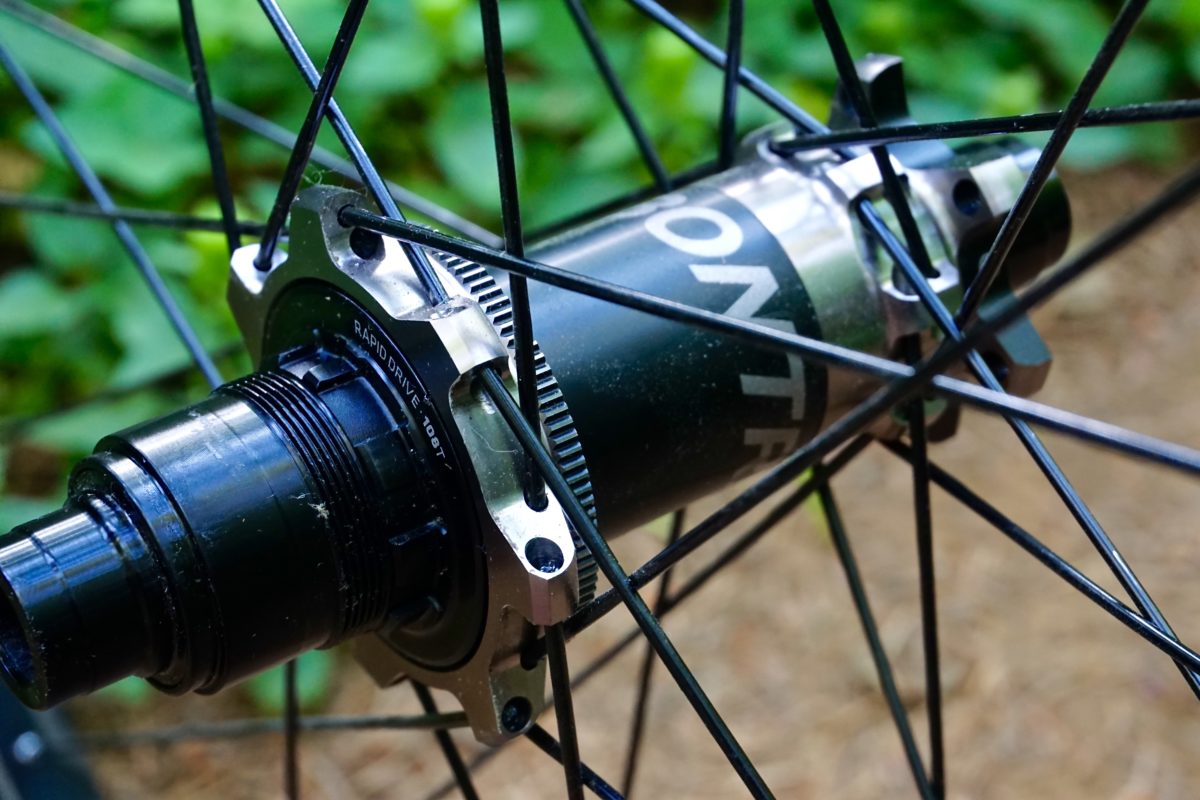 Despite the name, the actual internal width of the Line Elite measures 29mm with an outer width of 33. I’m guessing “Line Elite 29” would’ve been mistaken for the wheel diameter, not the width. The inner profile reveals a near-hookless bead with a drop channel and bead lock sealed with a Bontager rim strip (more on that below). As rims trend wider, most wheel manufacturers seem to be settling on 30mm as the width for all-around riding on a new range of wider tires. 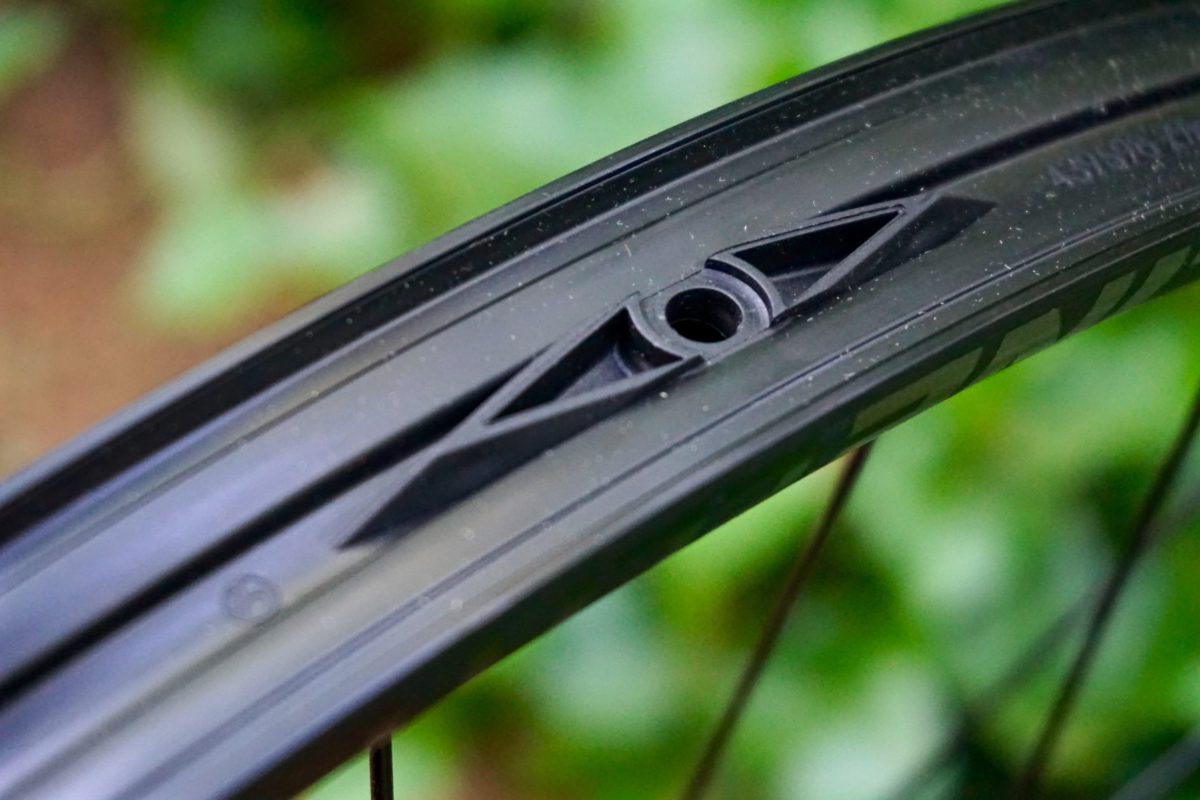 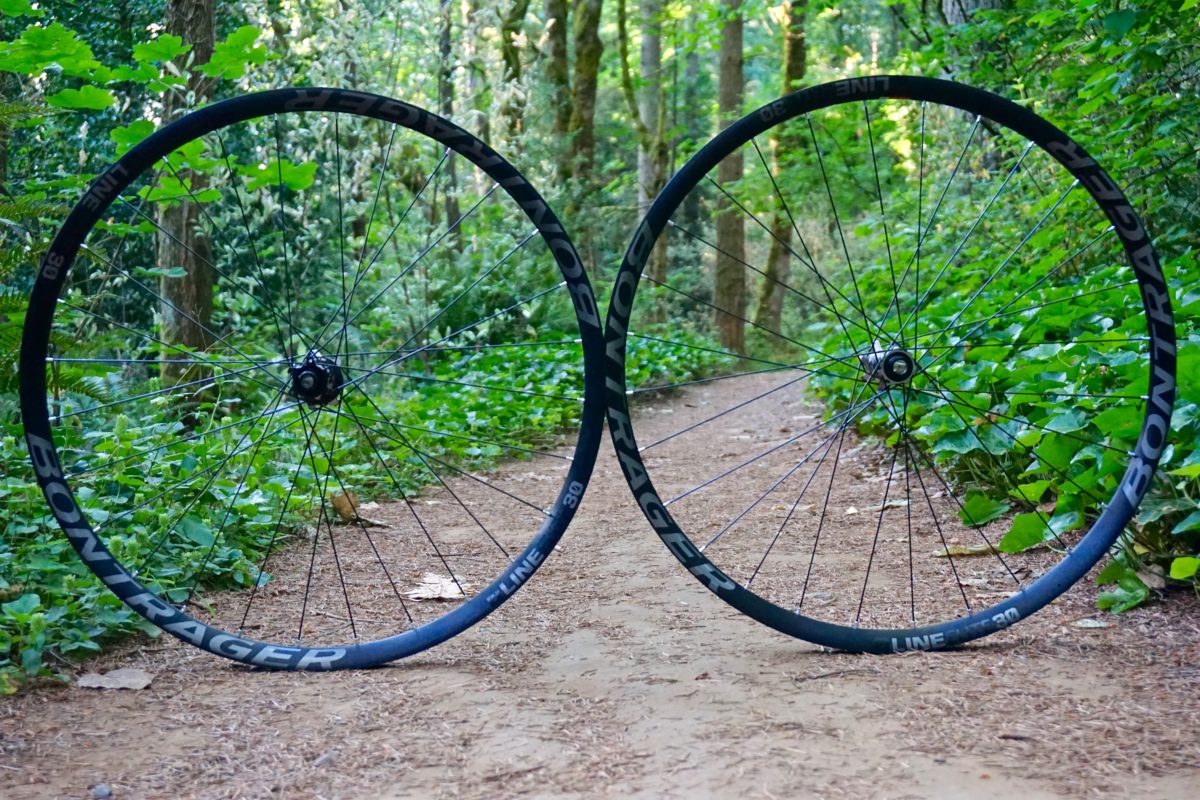 Taking full advantage of my stock 27.5+ Norco Torrent hardtail, I swapped my plus-size wheels out for the Bontrager Line Elite 30 29er set. Let me stop right here and say that $600 is money more than well-spent to convert a plus pig to a race-ready rig. Bontrager was also kind enough to send over a matching pair of their SE4 Team Issue tires. Mounting the 2.4-inch rubbers was a breeze, costing me no more than a few ounces of Stan’s, a floor pump, and just minutes of my time. Although a bit heavier than conventional rim tape, the Line Elite wheels come with Bontrager’s proprietary rim strip. The plastic strip snaps into the wheel bed and features a valve port specifically designed to fit the Bontrager valve. I did not try regular rim tape, but suspect that a tire would hold up just fine without having to order the $15 piece of plastic every time you need to freshen up. 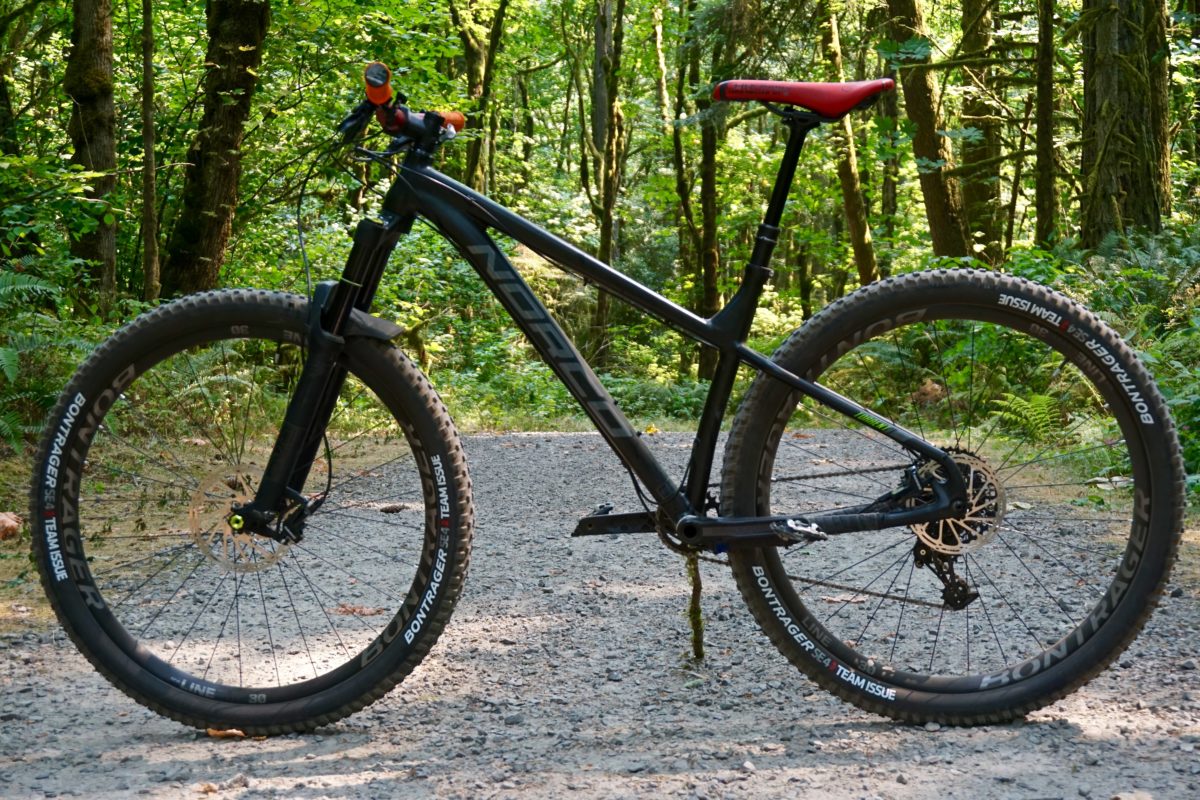 The Line Elite wheels spin up and sustain momentum like any well-built alloy 29er should — not as sprightly as 26″ or 27.5″, but much faster at speed. At 1,918g taped and valved with an XD driver, the Line Elite 30 isn’t exactly a weight-saver, but luckily, numbers on paper are only a fraction of the overall equation. The heavier-than-expected weight just didn’t translate on the trail, as the Line Elite felt fast, nimble, and responsive. The Rapid Drive hubs made a noticeable difference through high-speed rock and root sections where a quicker engagement can be the difference between hiking and biking. Through this same type of terrain, the Line Elite was sure-footed and strong, making precise line choices much less of a requirement.

For me, 29ers always feel a little overwhelming in tight corners. This means a really awkward exit preceded by an over-cooked entrance. Combine my sloppy cornering with a flexy wheel, and I’m anywhere but on the trail. The Line Elite 30, however, felt stiff and reassuring in corners both flat and banked. Just lean, and the Elite wheels hold. 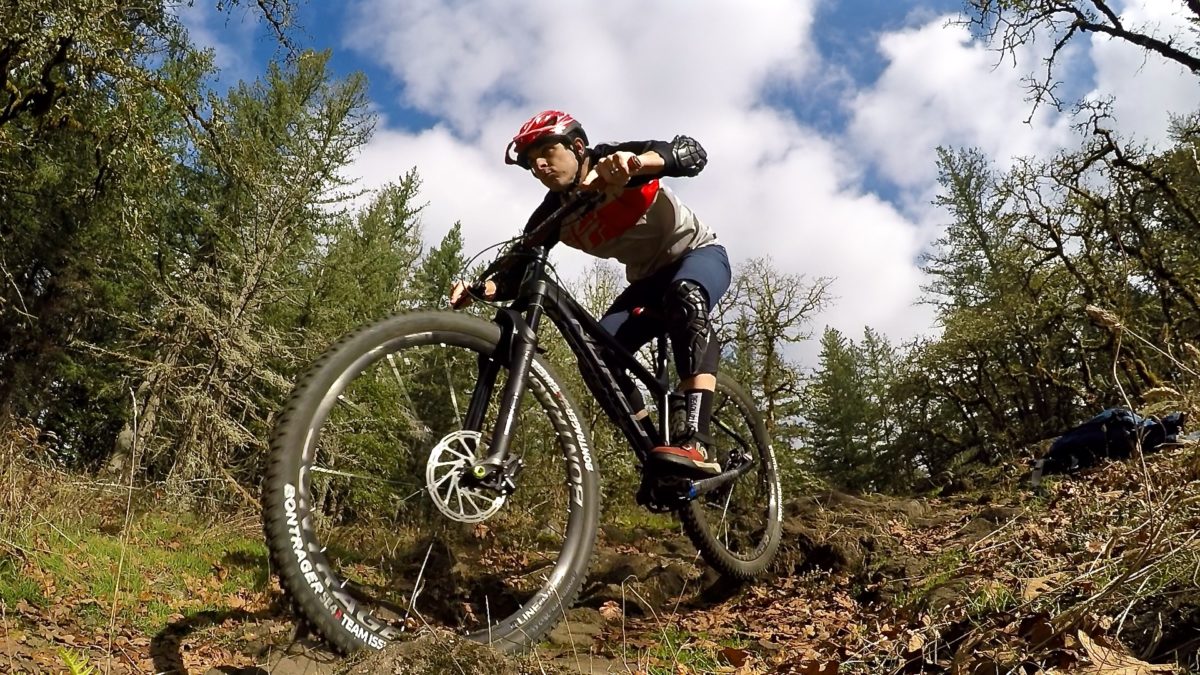 Despite a hub engagement neighboring the likes of Chris King and Industry Nine, the Rapid Drive hubs aren’t quite as loud, but are audibly present. I’m no stickler for hub engagement — the rear hub on my own wheel engages every 10 degrees — but the Rapid Drive made a noticeable difference clocking through undulating terrain where you’re frequently on and off the gas. Once up to speed, the extra drag was barely noticeable and certainly not enough to outweigh the benefits reaped from faster engagement.

An increasingly complex hub is often accompanied by higher cost, weight, tighter tolerances, and accelerated wear. Only time will tell if the Rapid Drive hubs will hold up. Popping off the freehub at the end of my review period revealed a set of teeth and pawls just as happy and healthy-looking as the day I received them. Despite a few smooches with some rock, the rims are without dents, and that bulky rim strip still looks pristine. While heavier than standard rim tape, I’m guessing the Bontrager strip will last longer.

This was only my second time ever on a set of Bontrager tires (the first was in Moab on the SE4 Team Issue). These tires were so impressively supple and strong, they’ve now taken a high spot on my list for future tires. 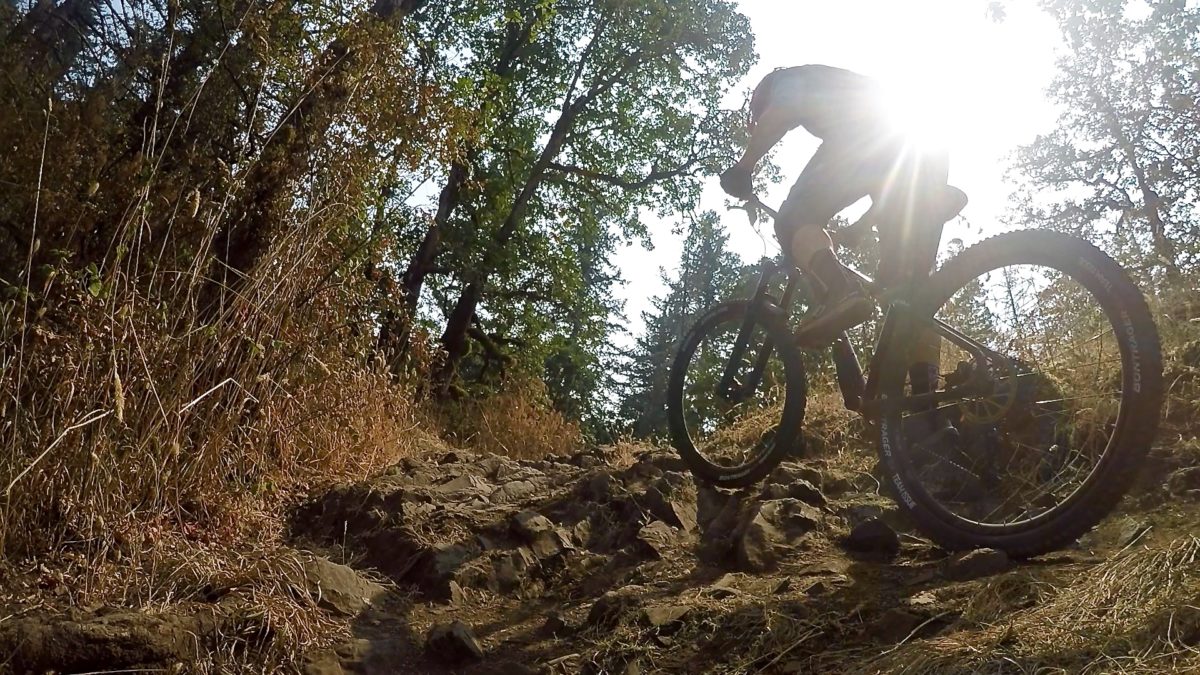 I’ve hammered the Line Elite 30 wheels for about three months now. I ride my full suspension bike more often than my hardtail so I don’t typically finesse the hardtail around the way I should. In other words, I was sloppier, less accurate, and more careless riding the Line Elite wheels than I could/should have been. All this to say, these Bontrager wheels took a licking, but kept on ticking!

If you’re looking for lightweight wheels, the Line Elite 30 Boost is not your ticket. That said, they ride lighter than they weigh. If, however, you’re looking for a responsive, durable wheel with lightning fast hub engagement — all of which puts no more than a dent in your wallet — the Line Elite 30 will be a solid choice. No colors, little by way of bling, bells, and whistles… just solid construction and performance for what matters.

Thanks to Bontrager for providing the Line Elite 30 Boost wheels for review!